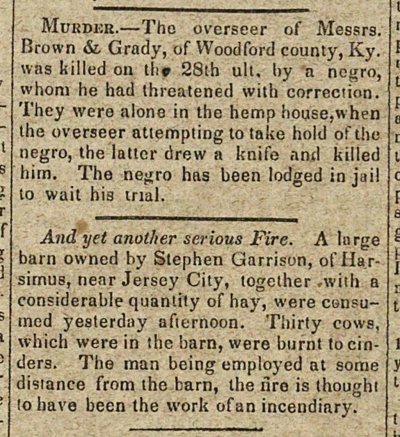 Tho overseer of Messrs.Brown & Grady, of Woodford county, Ky. was killed on lltf 28th uit, by a negro, whom he had threatened with correction. They were alone in the hemp house, when the overseer attempting to take hold of the negro, the latter drew a knife and killed him. The ne-Ã­ro has been lodged in jai! to wait hts trial.And yet another serious Fire. A lurge barn owned by Stephen Garrison, of Harsimus, near Jersey City, together ,with a considerable quantity of hay, were cansutned yesterdny afternoon. Tliirty cows, which were in the barn, were burnt to einders. The man being employed at some disiance from the barn, the Ã±re is thought lohave been the work ofan incendinry.