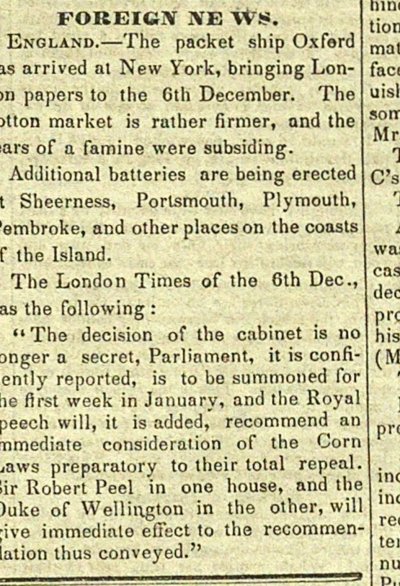 hNGLAND. - Ihe packet slup Oxterd m, s arrived at New York, bringing Lonfac i papers to the Gth December. The uis tton market is ruther firmer, and the s' irs of a famine were subsiding. Additional batteries are being erected q Sheerness, Porlsmouth, Plymouth, tmbroke, and other places on the coasts the Island. W! The London Times of the 6th Dec, c.a de s the following : â, "The decisiÃ³n of the cabinet is no hi nger a secret, Parlinment, it is (p â ntly reported, is to be summoned for e first week in January, and the Royal eech wil], it is added, recommend an imediate consideration of the Corn Ã¯ws preparatory to their total repeal. . r Robert Peel in one house, and the . uke of Wellington in the other, will n ve immedinlo effect to the T( ition thus conveyed."