Food For Cattle: For The Signal Of Liberty 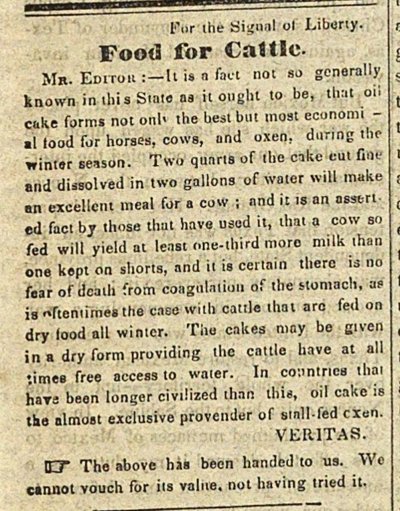 Food for Cattle. Mr. Editor: - It is in fact not so generally known in this State as it ought to be, that oil cake forms not only the best but most economical food for horses, cows, and oxen, during the winter season. Two quarts of the cake cut fine and dissolved in two gallons of water will make an excellent meal for a cow; and it is an asserted fact by those that have used it, that a cow so fed will yield at least one-third more milk than one kept on shorts, and it is certain there is no fear of death from coagulation of the stomach, as is oftentimes the case with cattle that are fed on dry food all winter. The cakes may be given in a dry form providing the cattle have at all times free access to water. In countries that have been longer civilized than this, oil cake is the almost exclusive provender of stall-fed oxen. VERITAS. The above has been handed to us. We cannot vouch for its value, not having tried it.