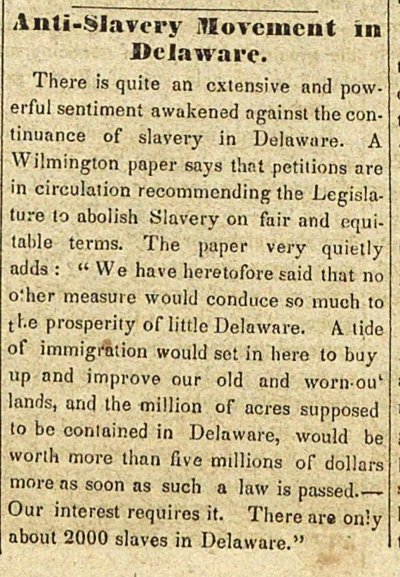 There is quite an cxtensive and powerful sentiment awakened against the continuance of slavery in Delawnre. A Wilmington paper says thnt pctilions are in circulation recommending the Legislature to abolish Ãlavery on fair and equital)le terms. The paper very quietly adds : We have lieretofore said that no ofher measure would conduce so much to the prosperity of little Delaware. A. lide of immigi'ation would set in here lo buy up and improve our old and worn-ou1 lands, and the million of acres supposed to bc coniained in Delaware, would be worlh more than five millions of dollars more as soon as such a law is passed Our interest requires it. There are oniy about 2000 slaves in Delaware."