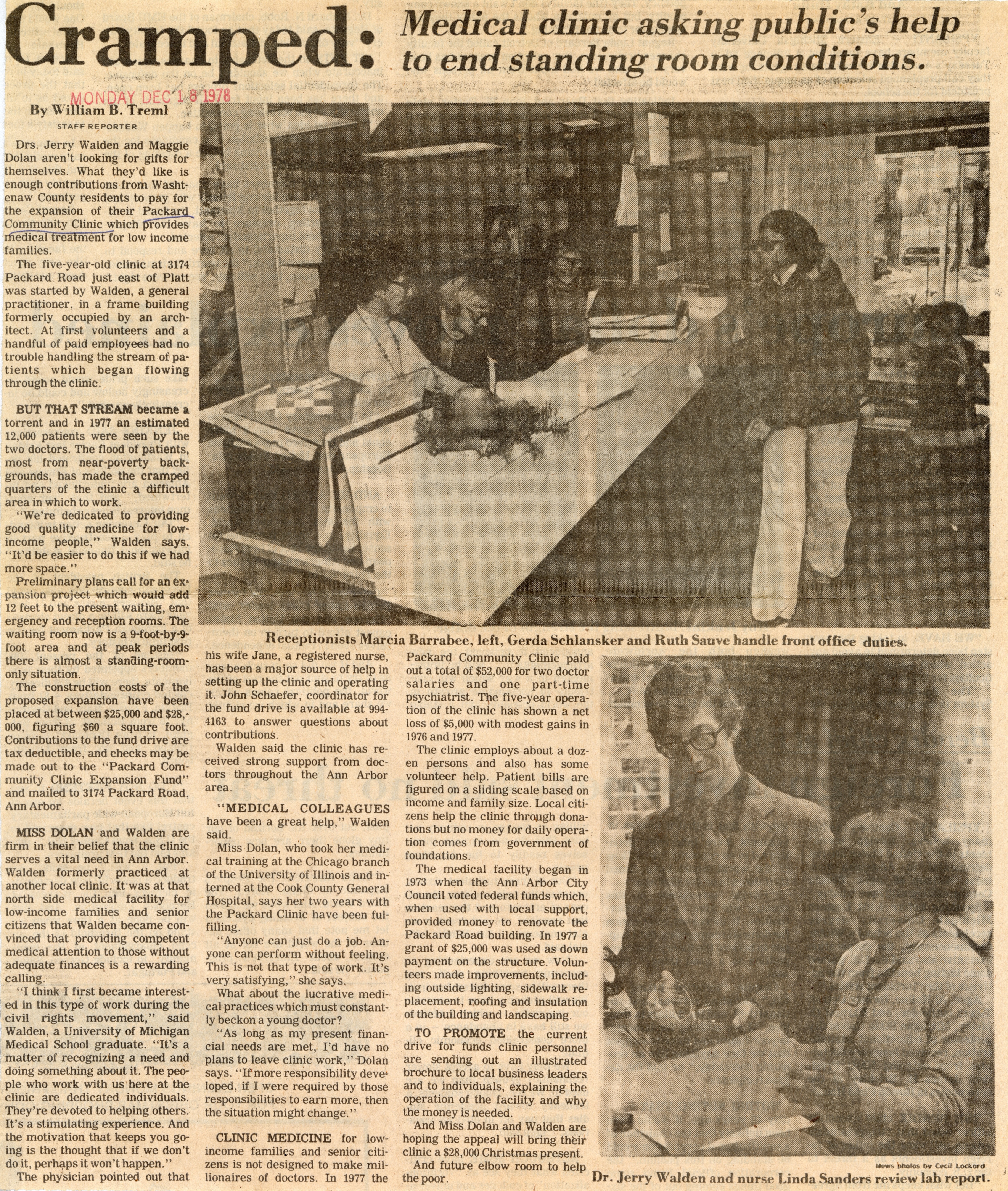 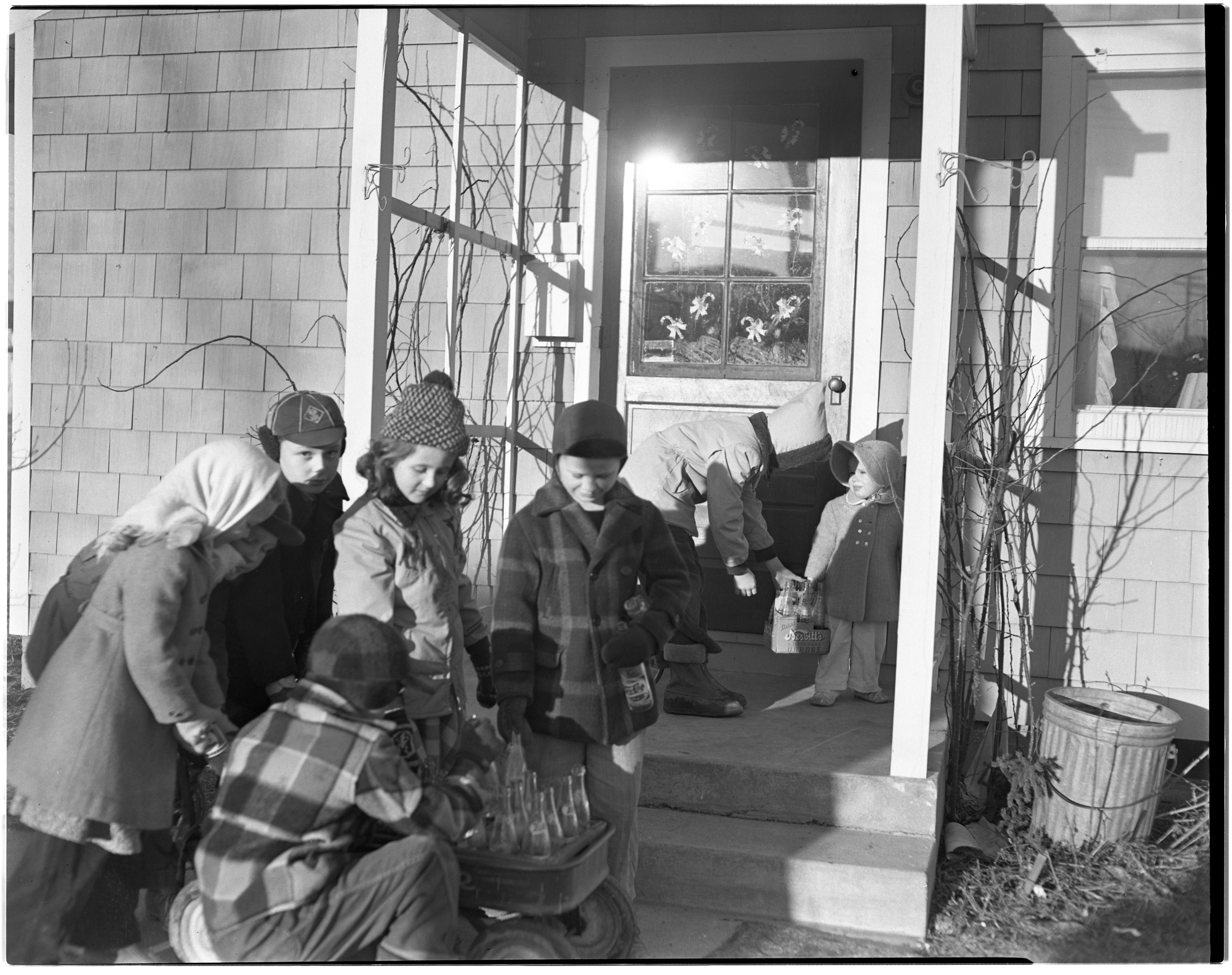 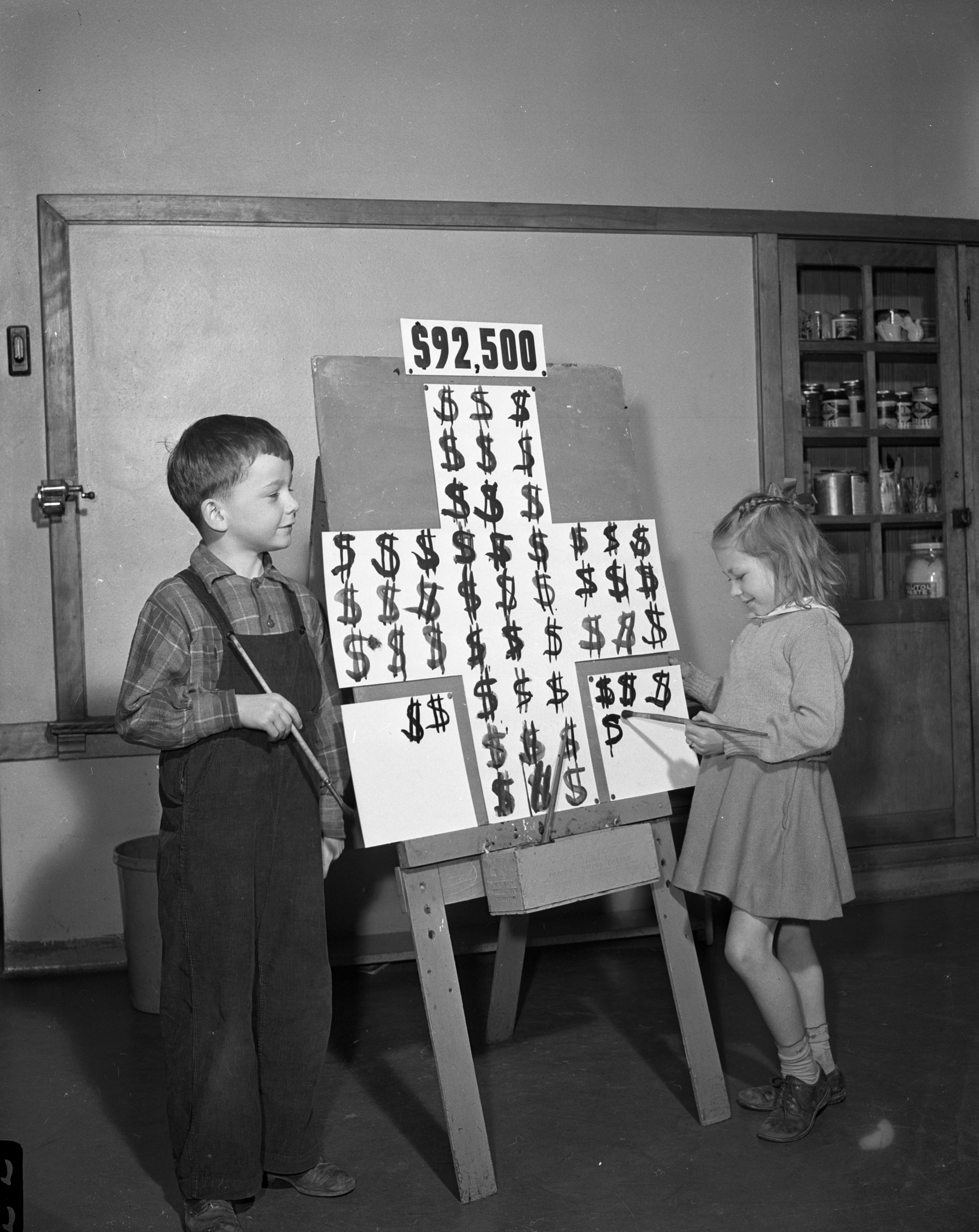 Published In
Ann Arbor News, March 30, 1944
Caption
Red Cross Total Mounts Although the Red Cross drive in Washtenaw county will not officially close until tomrrow, the county has already gone more than $9,000 beyond its goal of $92,500, and Lassie County and Laddie Ann Arbor happily added two and a half "$" signs to the record today, showing that the Red Cross total now stands at $101,521. Lassie County added one and a half "$" sings to her side of the big white cross, showing that the county outside Ann Arbor has contributed $35,287, or an increase of $4,287 over its quota of $31,000. Laddie Ann Arbor added one "$" sign on his side showing that the city of Ann Arbor has contributed $66,234, or $4734 over its quota of $61,500. Although the "$" signs have already filled the original cross used to keep a record of the donations, and have been crowded off to the side, reports from Red Cross headquarters say that more money is yet to come, and that Laddie and Lassie will still have work to do.
Copyright
Copyright Protected 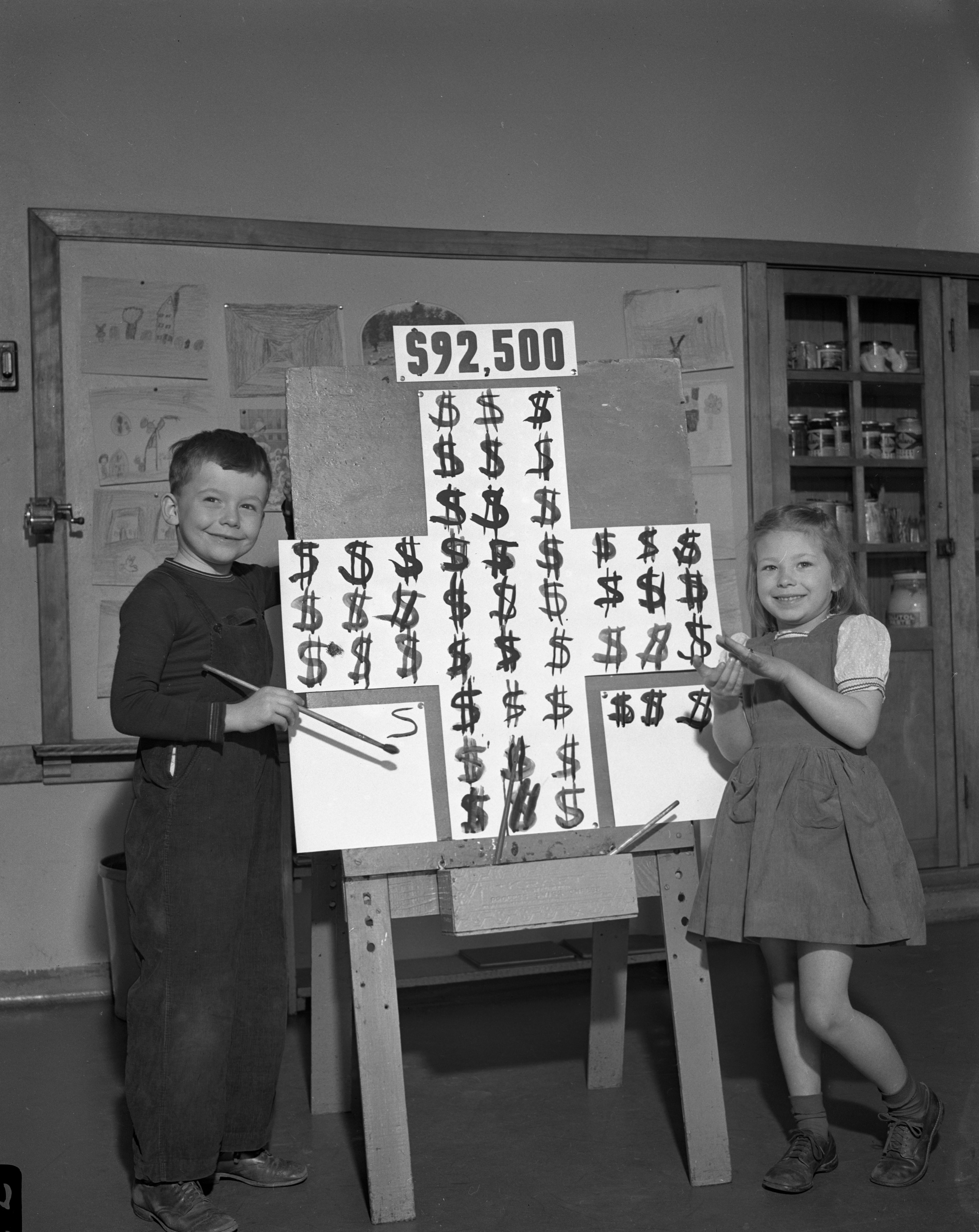 Published In
Ann Arbor News, March 28, 1944
Caption
Red Cross Goal Passed In Washtenaw County Laddie Ann Arbor and Lassie County nearly burst with pride as they finished filling in all the white spaces on the cross and hunted for more room as the Red Cross drive for funds went over the top today to the tune of $96,244. Lassie County clapped her hands with glee when she learned this morning that the county outside Ann Arbor had gone eight per cent beyond its quota of $31,000, and was now credited with collections of $33,507. Because the county came in first in the race today, Lassie was permitted to fill in her "$" signs first and she chalked up her 16th sign for the county which represents the extra margin the county has given. Laddie Ann Arbor felt pretty good himself as he put the 48th "$" sign on the cross, signifying that not only had Ann Arbor exceeded its quota by two per cent, but that the total for the city and county was four per cent beyond its goal. Congratulations are in order for everyone who has worked to make the "$" signs for the Red Cross grow, and the people of Washtenaw county can know that through their efforts the county has once more gone over the top for a good cause.
Copyright
Copyright Protected 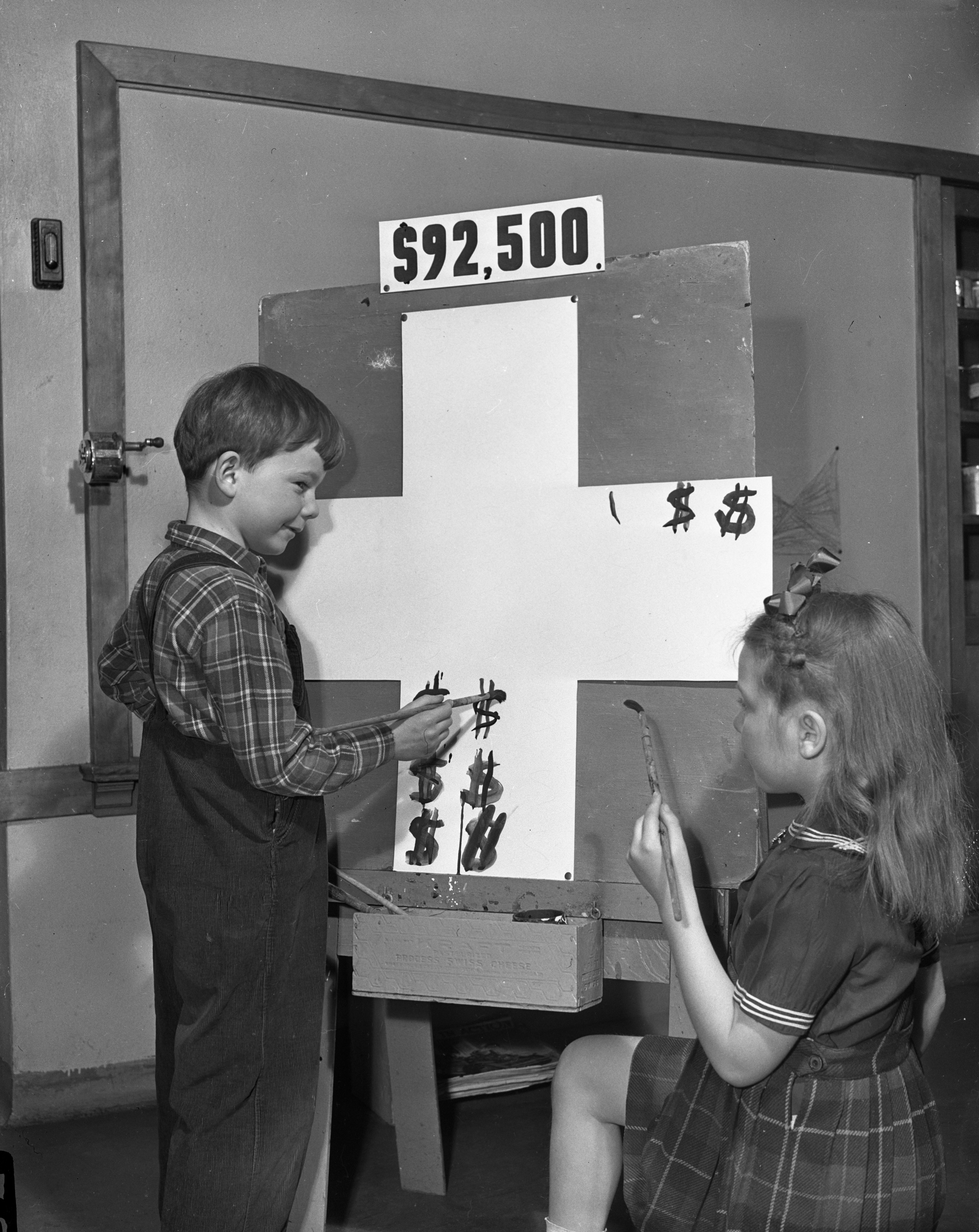 Published In
Ann Arbor News, March 9, 1944
Caption
Everybody Can Help! Laddie Ann Arbor finished up his sixth "$" sign today and got ready to fill in his seventh and to start on his eighth, as Ann Arbor contributed a total of $15,584.70 toward the Red Cross campaign. Lassie County worked on her second dollar sign today, representing the $3,402.36 contributed by the county. Each of the "$" signs Lassie and Laddie are marking on the Cross represents $2,000. Today Washtenaw county has a total Red Cross collection of $18,987. Collections in both the rural and city areas re growing, and the two youngsters are looking forward to a busy week of filling in "$" signs. They can only do that though if citizens of the county come to their aid by making contributions to the Red Cross--so now is the time for everybody to help.
Copyright
Copyright Protected 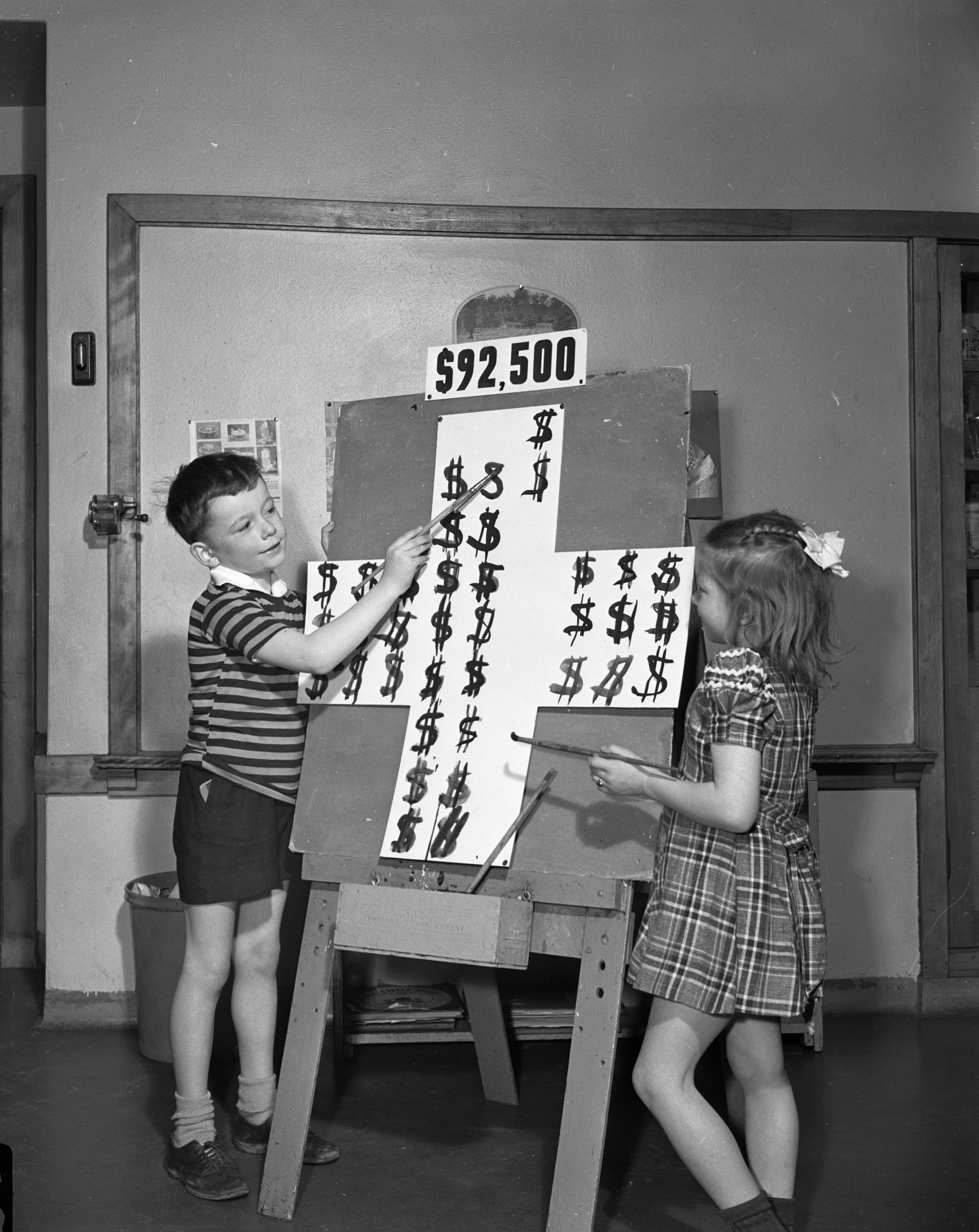 Published In
Ann Arbor News, March 21, 1944
Caption
Elven "$" Signs To Go! When Laddie Ann Arbor and Lassie County mark up 11 more "$" signs on the Cross, Washtenaw County will be over the top in its Red Cross drive. Today we had only $20,945 to go to reach our quota of $92,500. Each "$" sign represents $2,000. Ann Arbor today reported a total of $49,387 turned in to headquarters. That's 80 per cent of the city's $61,500 quota. Six more "$" signs will finish Laddie Ann Arbor's share of the Cross. Lassie County has 4 1/2 "$" signs still to go. Returns from Ypsilanti and the towns and rural districts of the county will have to come faster if Lassie County is to fill her space as quickly as Laddie Ann Arbor. Let's pass the quotas this week!
Copyright
Copyright Protected

Red Cross Total Is 23 Per Cent More Than Goal