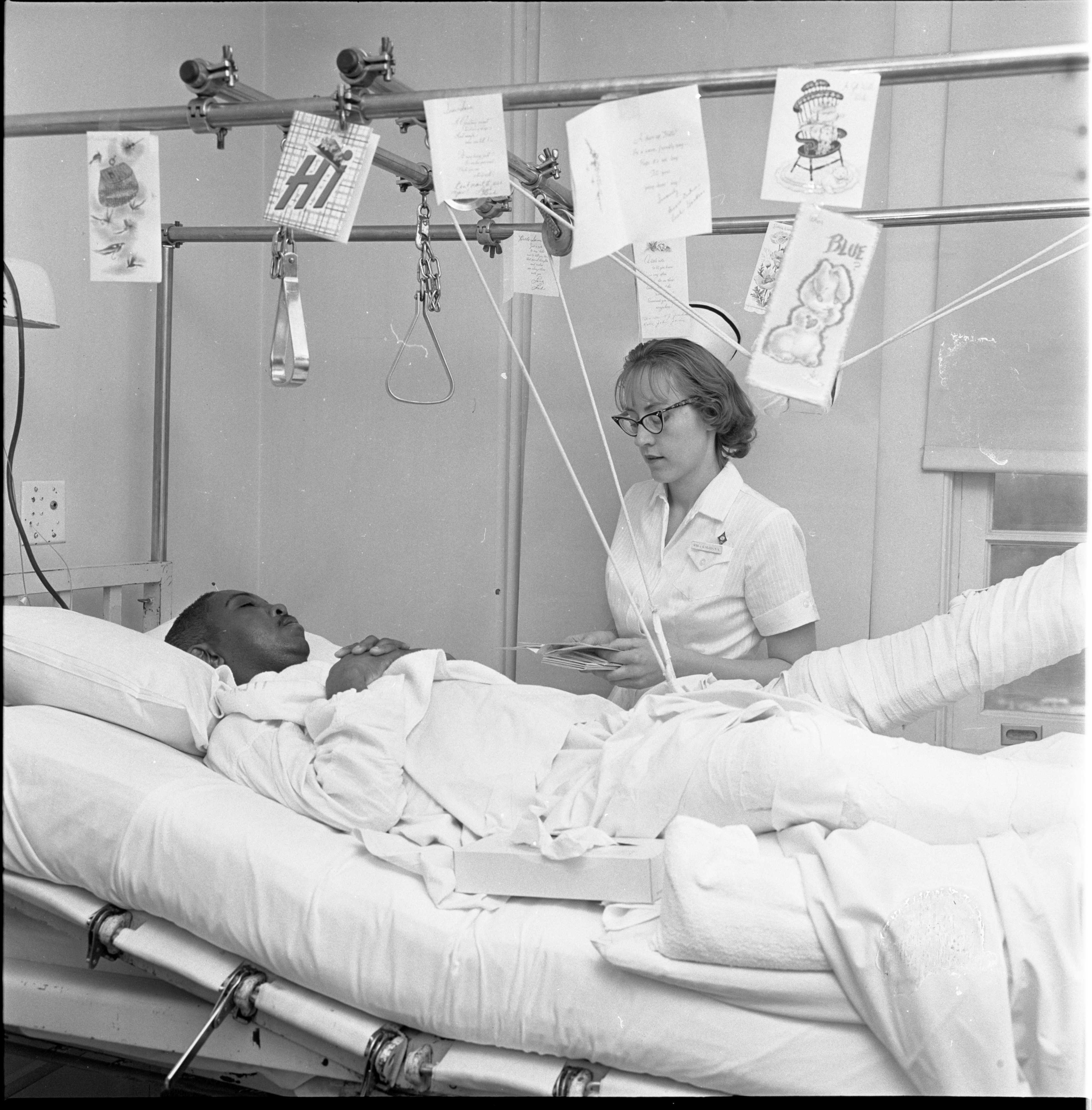 Published In
Ann Arbor News, February 28, 1964
Caption
FUTURE'S BRIGHT: Though he's flat on his back and will require extensive surgery for numerous broken bones and other accident injuries, Sam McDonald, Dundee's first Negro schoolteacher, has found thousands of friends he didn't know he had. The nurse is Miss JoAnn Nelson of the Veterans Administration Hospital in Ann Arbor.
Copyright
Copyright Protected

In Dundee The People Agree: Sam McDonald's Their Choice 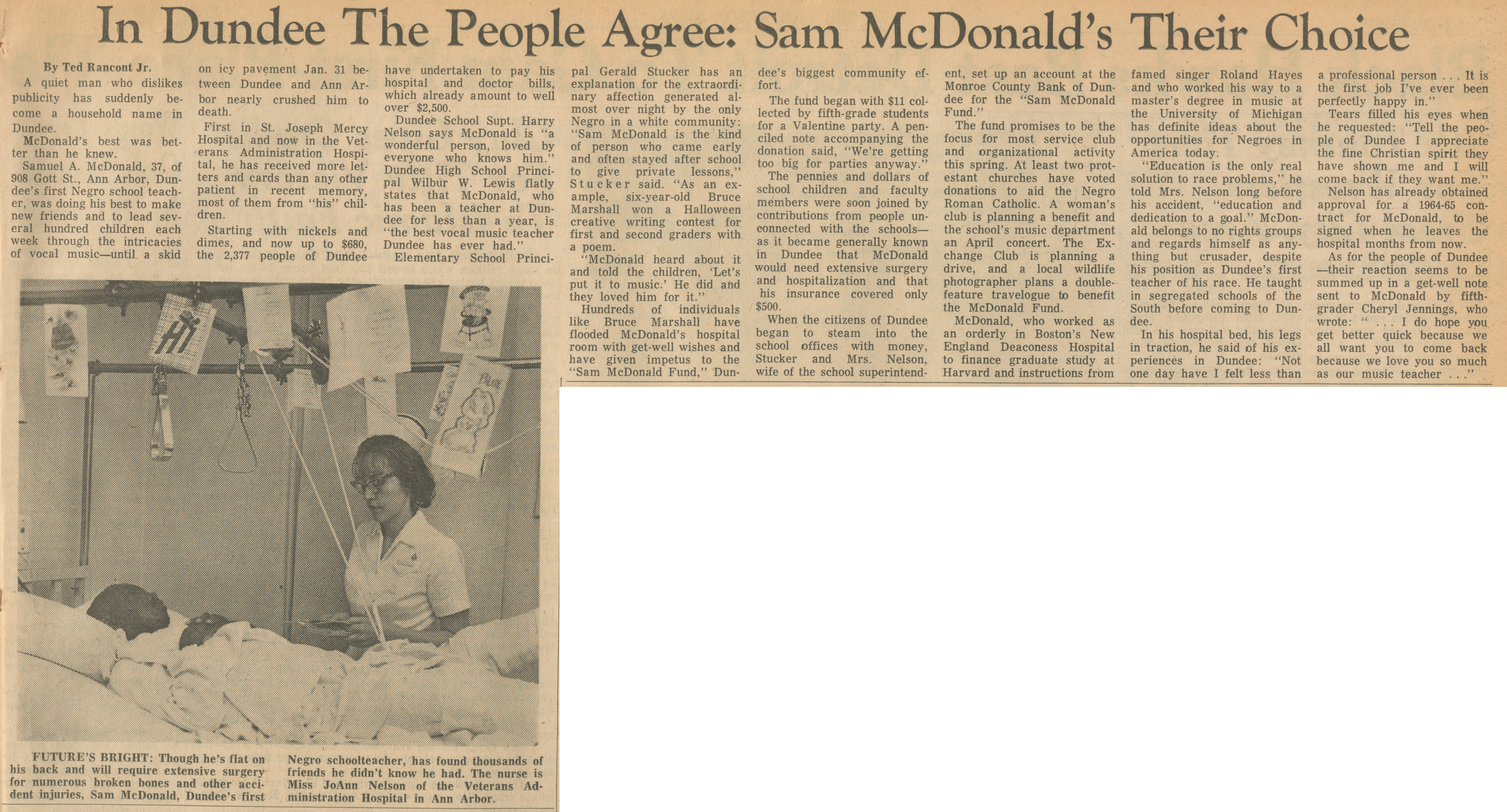 Sam McDonald Reads His Mail While In Veterans Hospital, March 1964 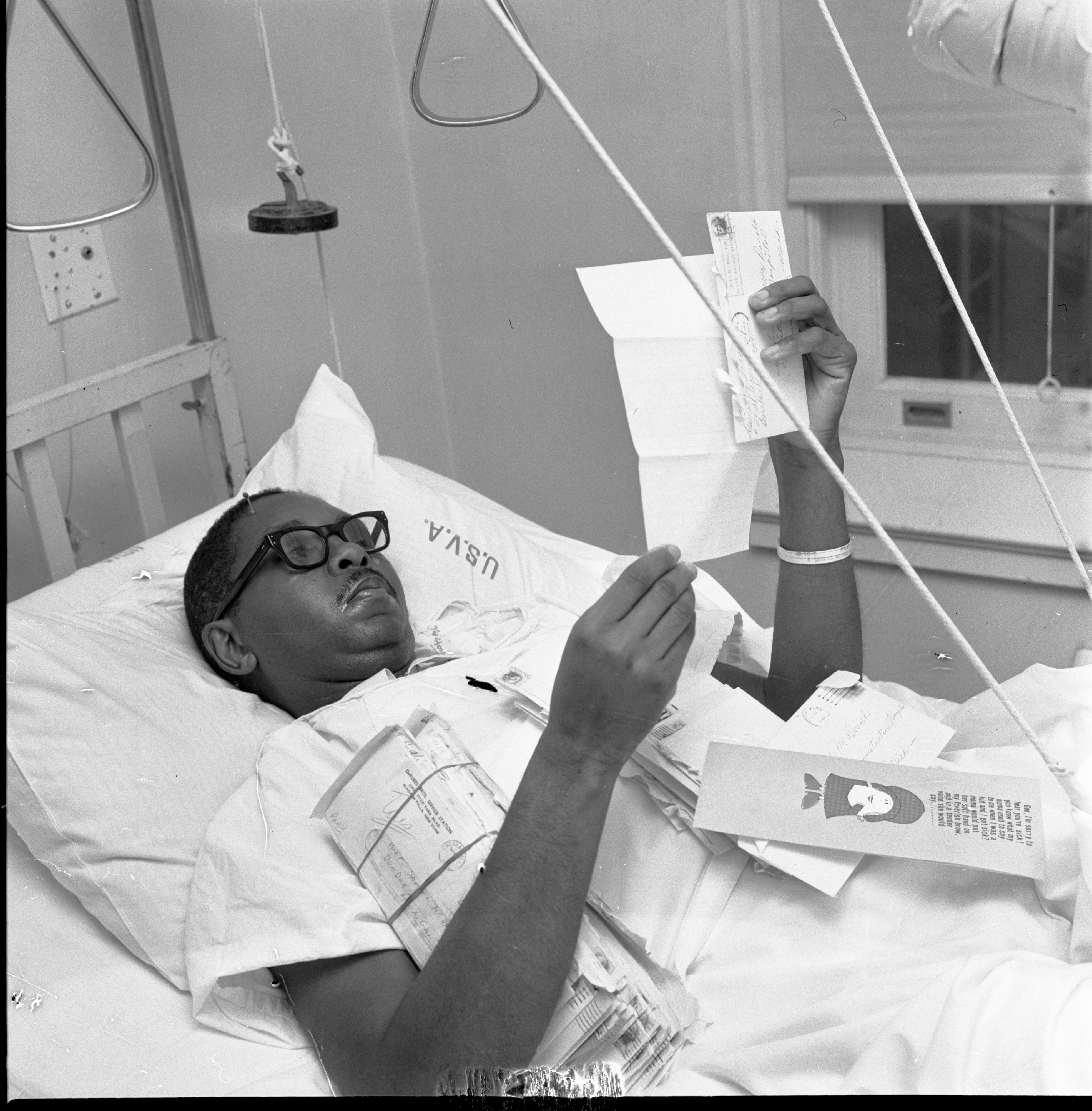 Published In
Ann Arbor News, March 10, 1964
Caption
CATCHING UP ON HIS MAIL: Samuel A. McDonald, the only Negro school teacher in the 2,377-resident village of Dundee, gets into the day's batch of mail while recuperating in Veterans Hospital from serious injuries suffered in a Jan. 31 auto accident. Students and Dundee friends have collected more than $1,700 to help defray the 37-year-old McDonald's hospital and medical bills.
Copyright
Copyright Protected

Catching Up On His Mail 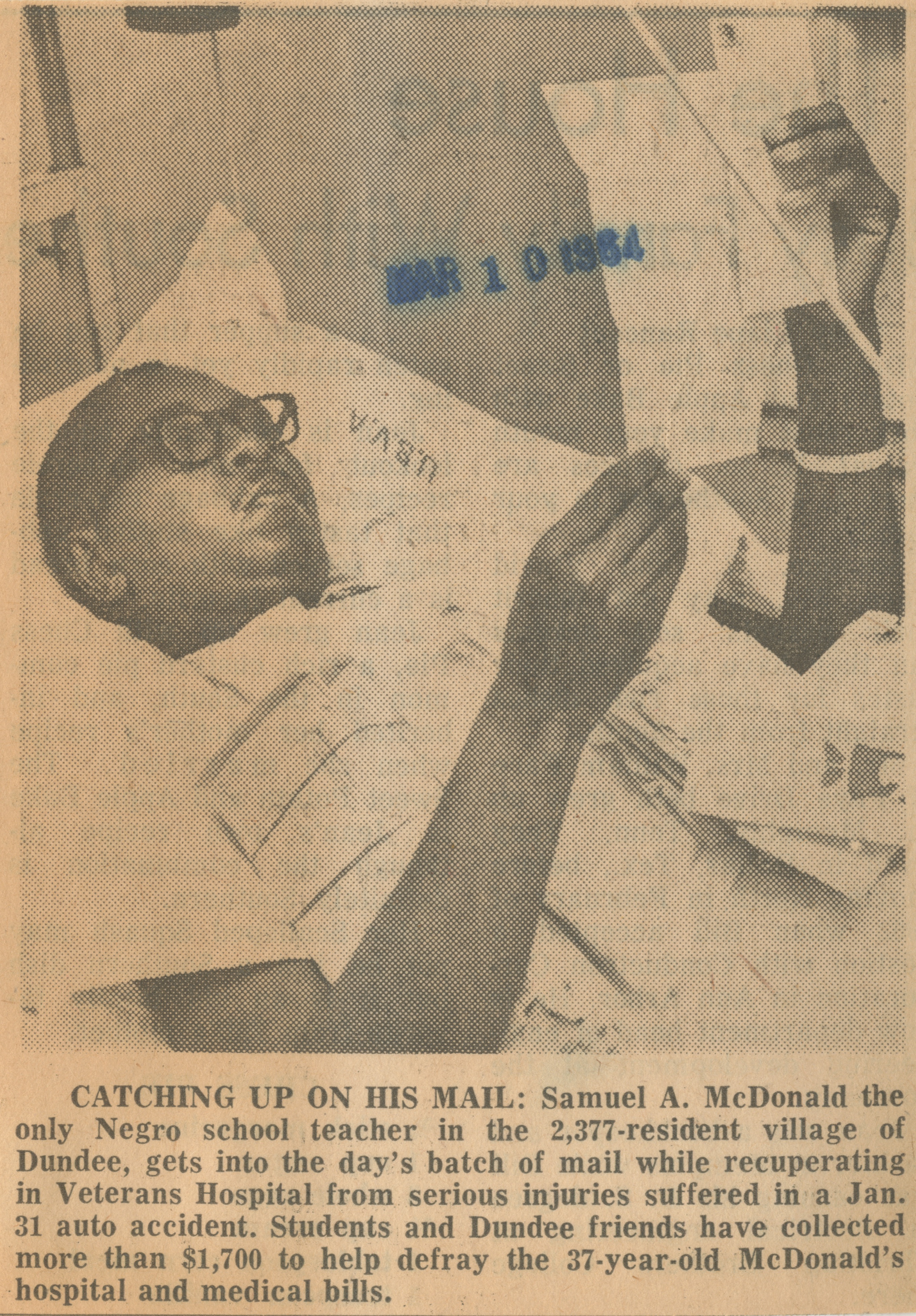 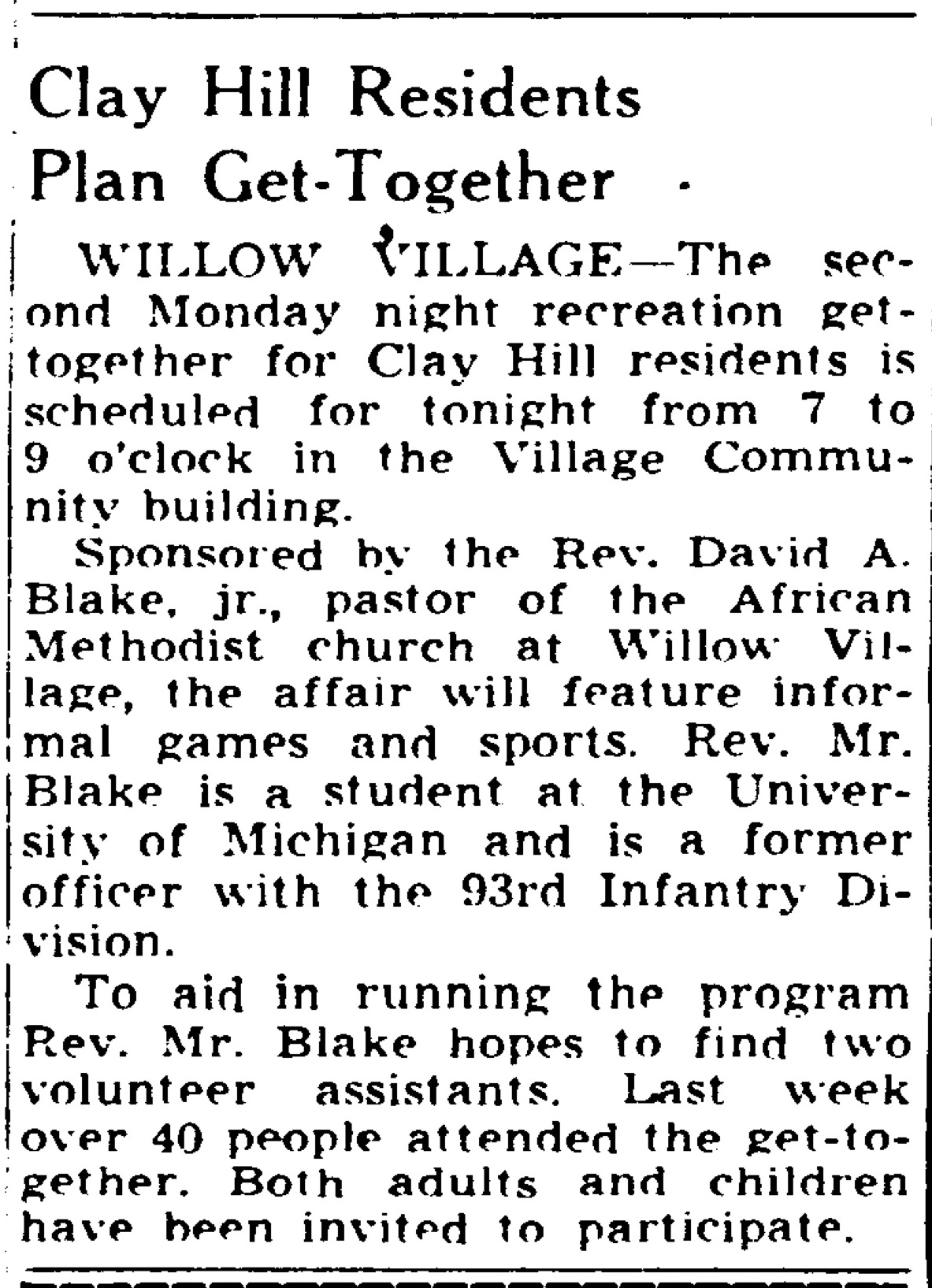 Marlene Laws grew up in Detroit and graduated from Sidney D. Miller High School in 1958. She served in the military at Fort Sam in Houston, Texas from 1960 to 1962. Upon returning to Michigan, she was a nurse at Pontiac State Hospital for two years. Laws dedicated 43 years of her career to the United States Postal Service as a clerk and then as a Human Resources specialist. She and her former husband Kenneth had one daughter, Dr. Dawn N. Laws. Marlene Laws passed away on February, 4, 2017.

Marlene Laws was interviewed by students from Skyline High School in Ann Arbor in 2010 as part of the Legacies Project.

Ernestine Bull grew up in Detroit after moving there with her uncle in 1943, and she recalls attending concerts by the young Aretha Franklin at New Bethel Baptist Church in the 1950s. She joined the United States Army Women's Army Corps (WAC) and did her basic training at Fort McClellan, Alabama. She was stationed at Fort Leonard Wood, Missouri, where she was a member of the basketball team, and in Yokohama, Japan. After her service in the army she was a teacher at Dexter Ferry Elementary School in Detroit for many years.

Ernestine Bull was interviewed by students from Skyline High School in Ann Arbor in 2010 as part of the Legacies Project.