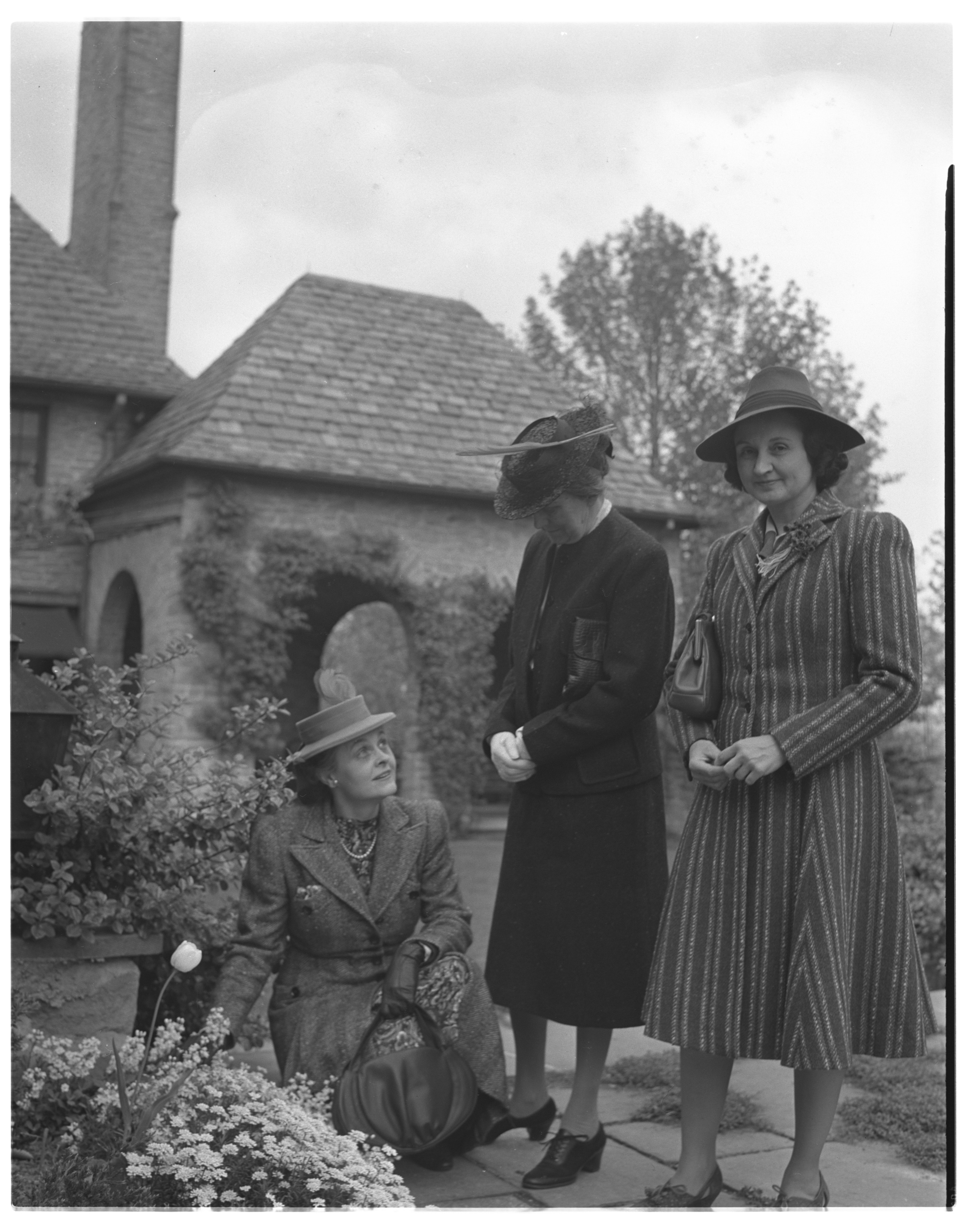 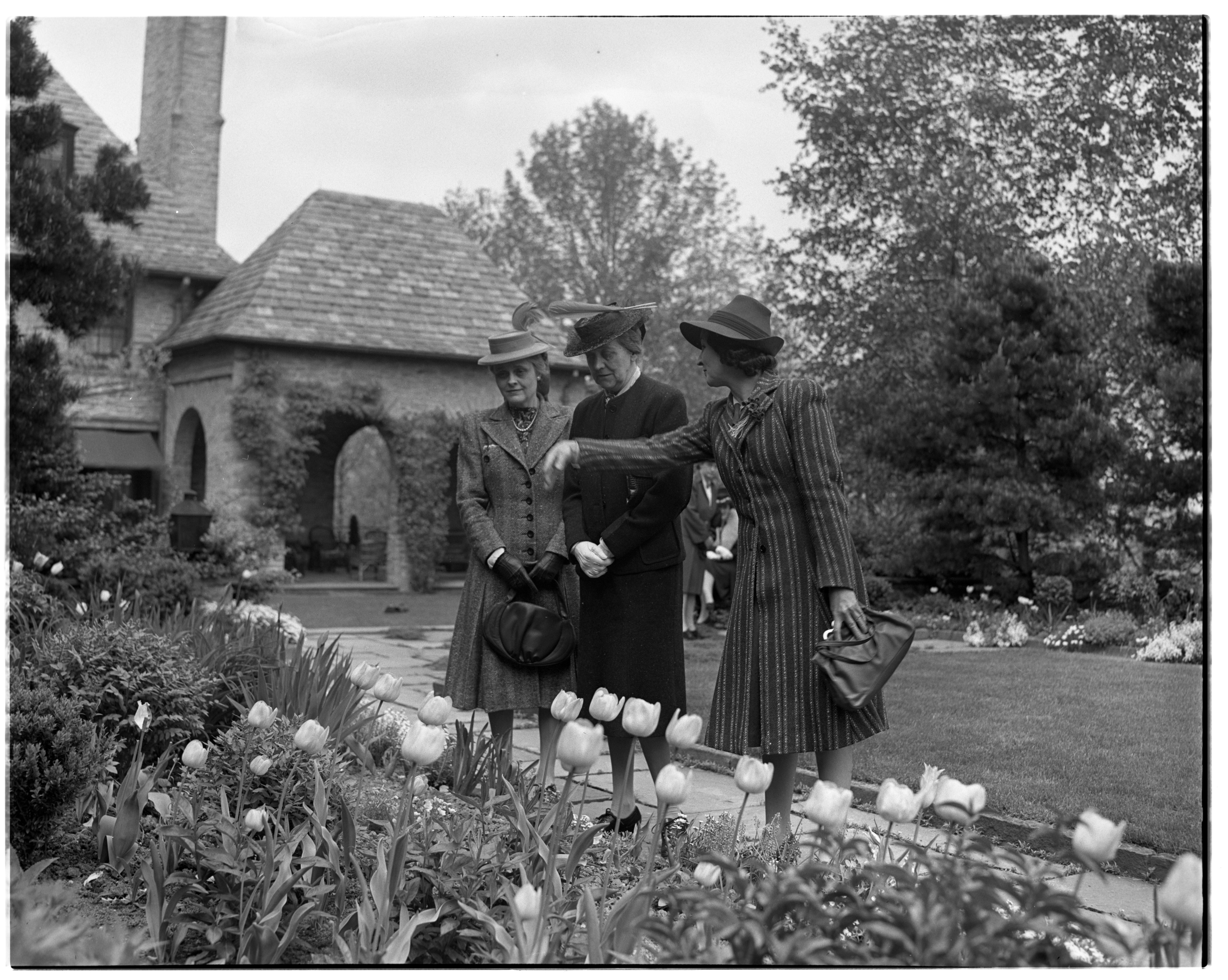 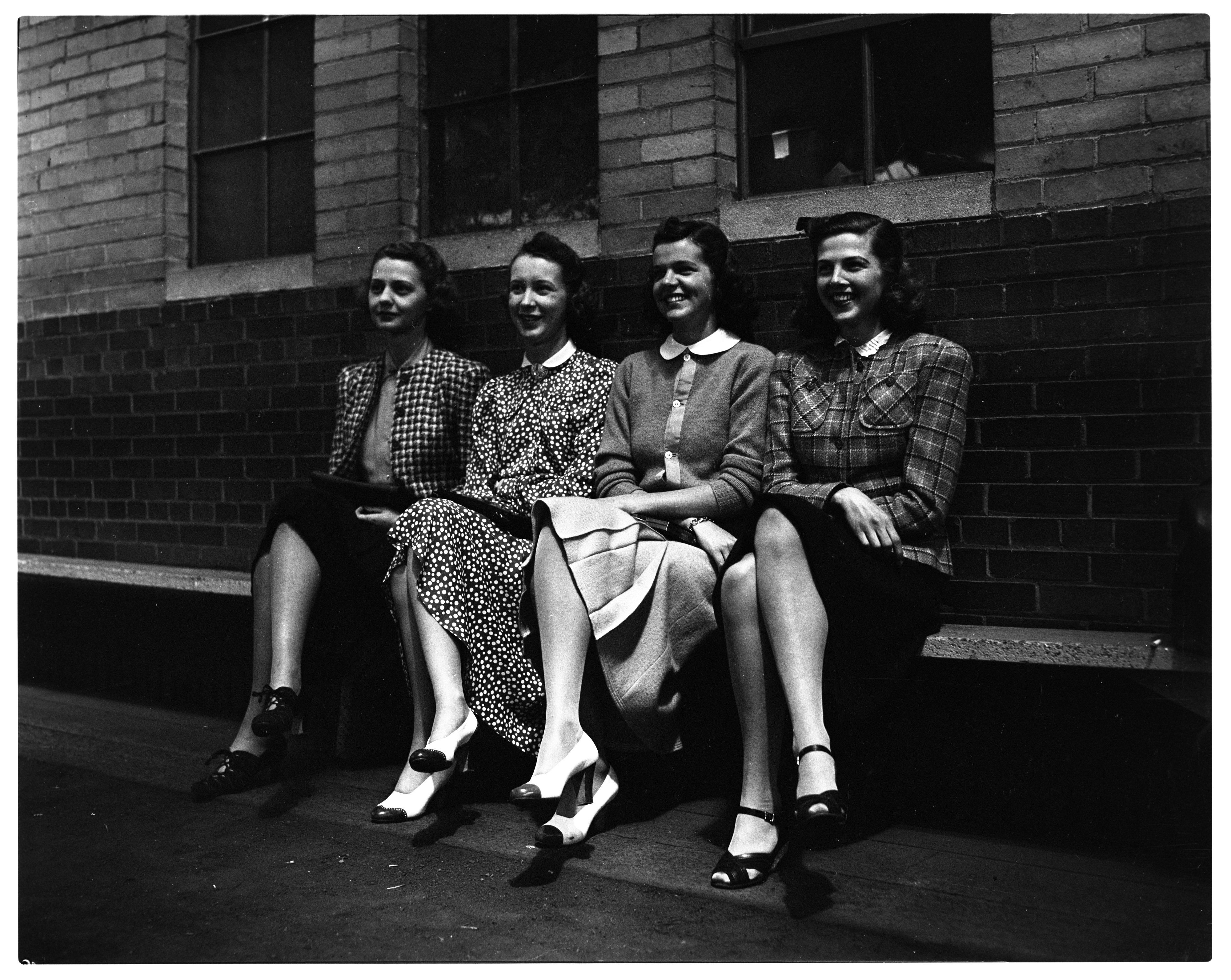 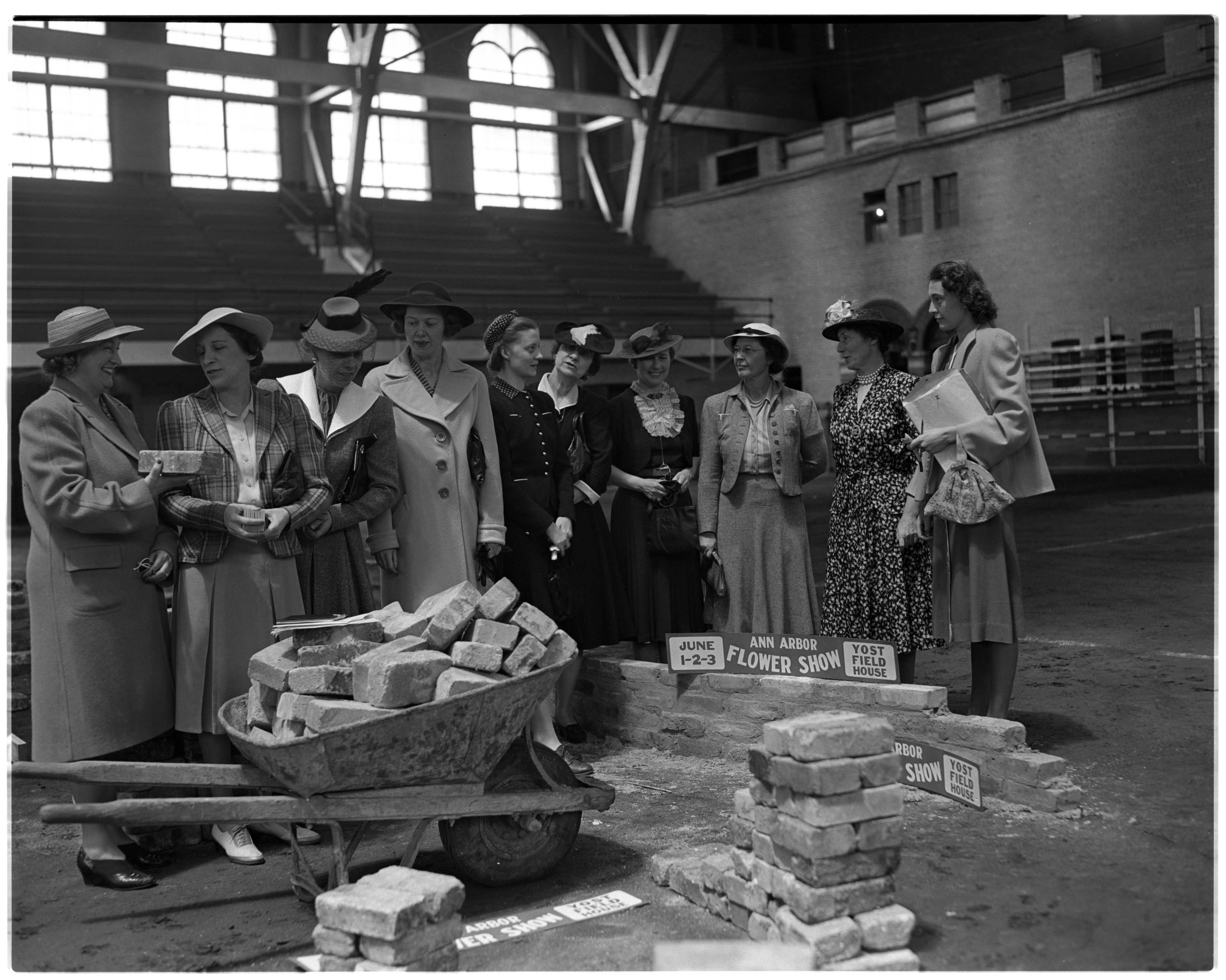 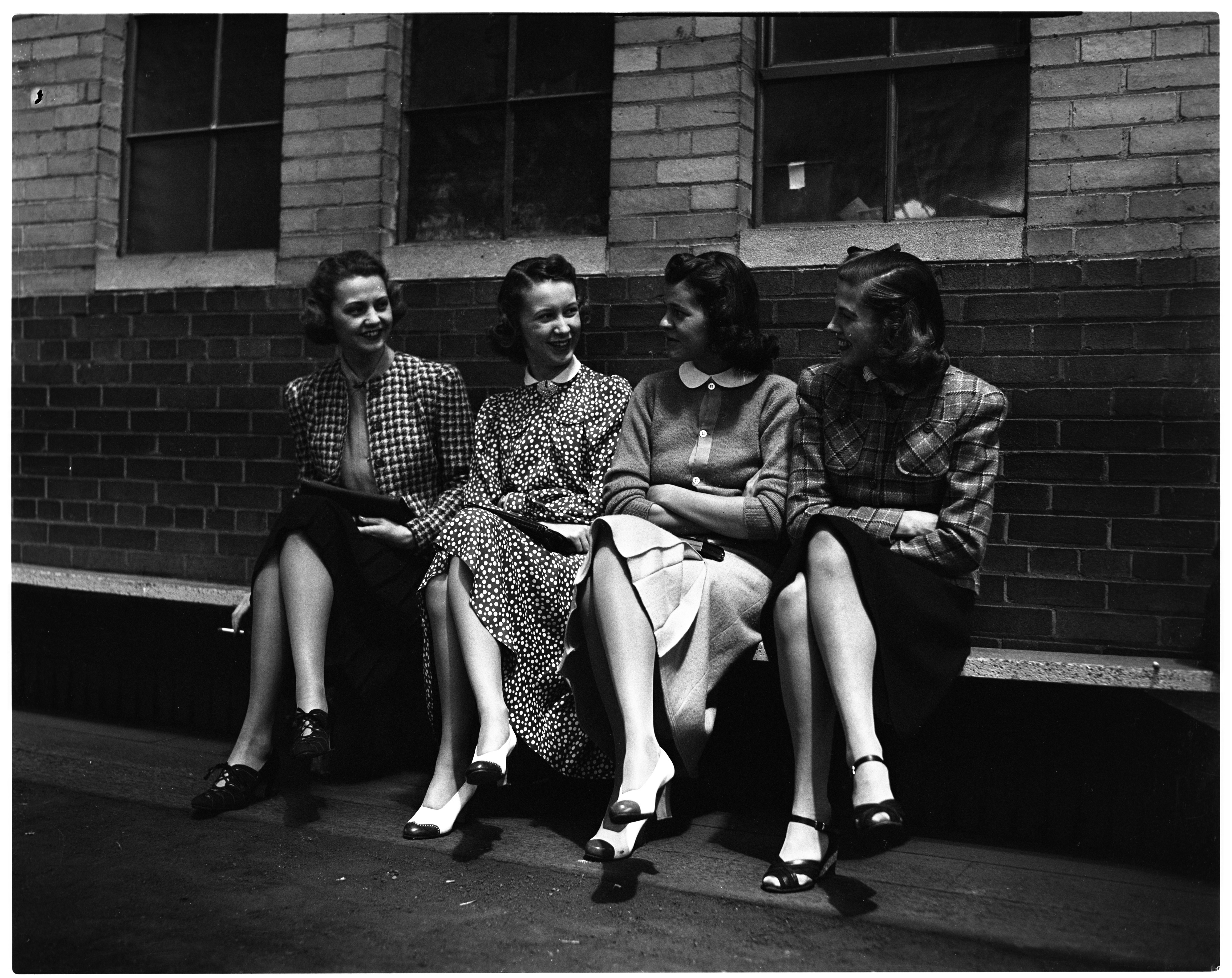 The Old News collection of Ann Arbor News articles and photos on the Ann Arbor Garden Club spans more than 80 years, starting in 1930, and chronicles not only changes in the club itself, but in women’s role in the world. When the club started in 1930, it was an era when women were known by their husband’s name with a Mrs. in front of it and took their position in society based on his profession.

The club was formed by a merger of three community groups - The Garden Sections of the Faculty Women’s Clubs, the Woman’s Club of Ann Arbor, and the Ann Arbor Garden Club. Of these three entities, the faculty women’s club appears to be the most active. They had started a yearly garden show in 1926, held in the Hudson-Essex agency on East Washington, and in the years following, at the Detroit Edison building (where the Detroit Edison parking lot is now). Their most memorable activity, a year before the merger, was a visit to Mrs. Henry Ford’s garden arranged by Mrs. Ford’s sister, a Mrs. Grant, the president of the Dearborn garden club.

The new garden club’s mission was “to make Ann Arbor beautiful by improving individual gardens.” Most of the meetings were held in the afternoon, possible in the days when women generally didn’t work out of the home. Their events - elections of officers, meetings in homes, speakers, public service projects - were given full coverage in the Ann Arbor News, often accompanied with pictures of women posing in their gardens dressed in formal attire. The Ann Arbor Garden Club was the first federated garden club in Michigan and took a leadership role in the state as other communities organized. 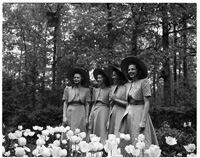 In the early days the emphasis was on educating themselves and the community on the basics of gardening. Meetings were full of practical information such as the use of herbs or how to grow vegetables. Special interest groups led meetings with talks on their specialties such roses or perennial shrubs. Eli Gallup, the city’s first superintendent of parks, spoke to the group on trees and soil. Larger events open to the public included “A Pilgrimage to God’s First Temples,” a noted expert speaking in 1935 on his “round the world trip to see the rarest and most beautiful trees, illustrated with tinted stereopticon pictures which his wife had colored using notes from the trip.” A 1940s program featured a plant geneticist showing stereopticon pictures “in natural colors of flower fields in Michigan and California.” A talk from the associate editor of Better Homes and Gardens was co-sponsored by U-M’s school of landscape design.

In the summer the club organized garden walks, open only to members, where they visited a selection of each other’s gardens. The garden shows, however, were open to the public as part of the club’s effort to improve gardens city wide. Called the “Ann Arbor Citizen’s Flower Show,” the only requirement was that the flowers be grown in Ann Arbor. During the months leading up to the show, the News articles were full of requests for people to participate, even with clip out entry forms and ads in the paper during the event urging people to attend. 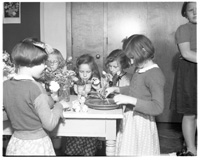 To beautify public areas of the city, the club at various times provided flowers for the Michigan League, the public library, and the post office. In 1937 they sponsored a City Beautiful contest, giving awards for gardens in a wide array of categories such as homes, industry, businesses, fraternities and sororities, and institutions. They also visited schools to teach children about gardening and nature and helped them build bird houses.

In 1938 the Ann Arbor Garden club hosted the state convention of the Federated Garden Clubs. In addition to many displays - how to do ikebana, drawings and photos of plants - the event included visits to prominent member’s gardens. Mrs. James Inglis, considered the club’s founding mother, invited attendees to breakfast. (Her house on Highland has been owned by U-M since 1951.) Mrs. Harry Earhart invited people to tea at her house (now part of Concordia) to see her gardens complete with one of the rare green houses in town. The event ended with a ball at the Michigan Union with gardenias given as favors. The Ann Arbor News photo shows Mrs. Alexander Ruthven, wife of U-M president, presenting a flower to Mrs. Frederick Coller, whose husband was head of U-M’s Department of Surgery.

Hospital work varied but was always one of their major projects. In the 1941, after hearing a talk on flower arranging, they decided to start every meeting with a member demonstrating a different arrangement, after which the sample was given to the hospital. In 1942 they committed themselves to keeping the ninth floor of University Hospital filled with flowers. They first collected vases that their members were not using. They then arranged that every Wednesday members could bring flowers to the ambulance entrance and hand their contributions to an attendant, thus avoiding the need to park. 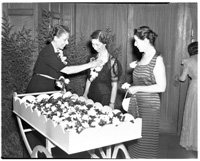 The first mention of World War II in the garden club articles occurred in January 1942, a month after Pearl Harbor, when members putting together the club book announced that it “was designed to meet war conditions.” They assured the group that they had taken into account a shortage of materials and increased costs and added information on Victory Gardens. The club finished out the year with a speaker on vegetables and a garden walk, after which there is no mention of the garden club for the next seven years. These same ladies were no doubt using their organizational skills to do war work. See “Ann Arbor Goes to War” in Old News.

Articles about the Garden Club reappeared in 1949 with the announcement of an exhibit at Clements Library that included books and drawings about flowers and gardening. In the post-war era the club returned to many of their original projects but with less of an emphasis on basic gardening techniques and more interest in the wider world. Their new beautification project was raising money for a Shakespeare Garden at the Michigan League. The garden was to contain plants mentioned in the Bard’s works. An art walk through selected gardens was organized, with sculpture loaned by the Forsythe Gallery. Programs often focused on other nations, such as a talk by a member who had returned from Japan on the gardens of that country or a Christmas program on Christmas tree decorations of others lands.

Club members were interested in, and became experts in, a new field called “garden therapy.” They worked with patients at the County Hospital (where the Meri Lou Murray Recreation Center now stands) teaching them how to make corsages and do flower arrangements. They visited children in University Hospital, showing them how to work with fresh flowers. They also continued working with children through the schools, planting bulbs at Eberwhite, working with Wines’ students to set up a flower show, helping Thurston students plant fir trees to later replant nearer the school building, and awarding a conservation scholarship to a teacher for summer camp at Higgins Lake.

The intense coverage the News gave the garden club in the pre-war years lessened as the town grew and more activities vied for attention. In the 1980s women gradually began being referred to by their Christian names, sometimes used interchangeably with Mrs. in the same article.

In 1991 the garden club took on the big job of reinstating the yearly garden shows, which they had stopped in World War II. After the war they held events that they called garden shows but they were small events reserved mainly for their members. The new one was, and is, for the whole community, as were the original ones. In 2001 garden club president, Kathy Fojtik encouraged “a large contingent of people to bring their plants, something they’ve spent time raising.”

In the twenty-first century the News gave the garden club much less coverage, with only an occasional article, usually about events open to the public such as an upcoming garden show or garden tour. The last one in the collection is a 2006 article noting that the garden club gave Matthaei Botanical Gardens a decorative garden gate.

View all articles about the Ann Arbor Garden Club.

View all photos about the Ann Arbor Garden Club. 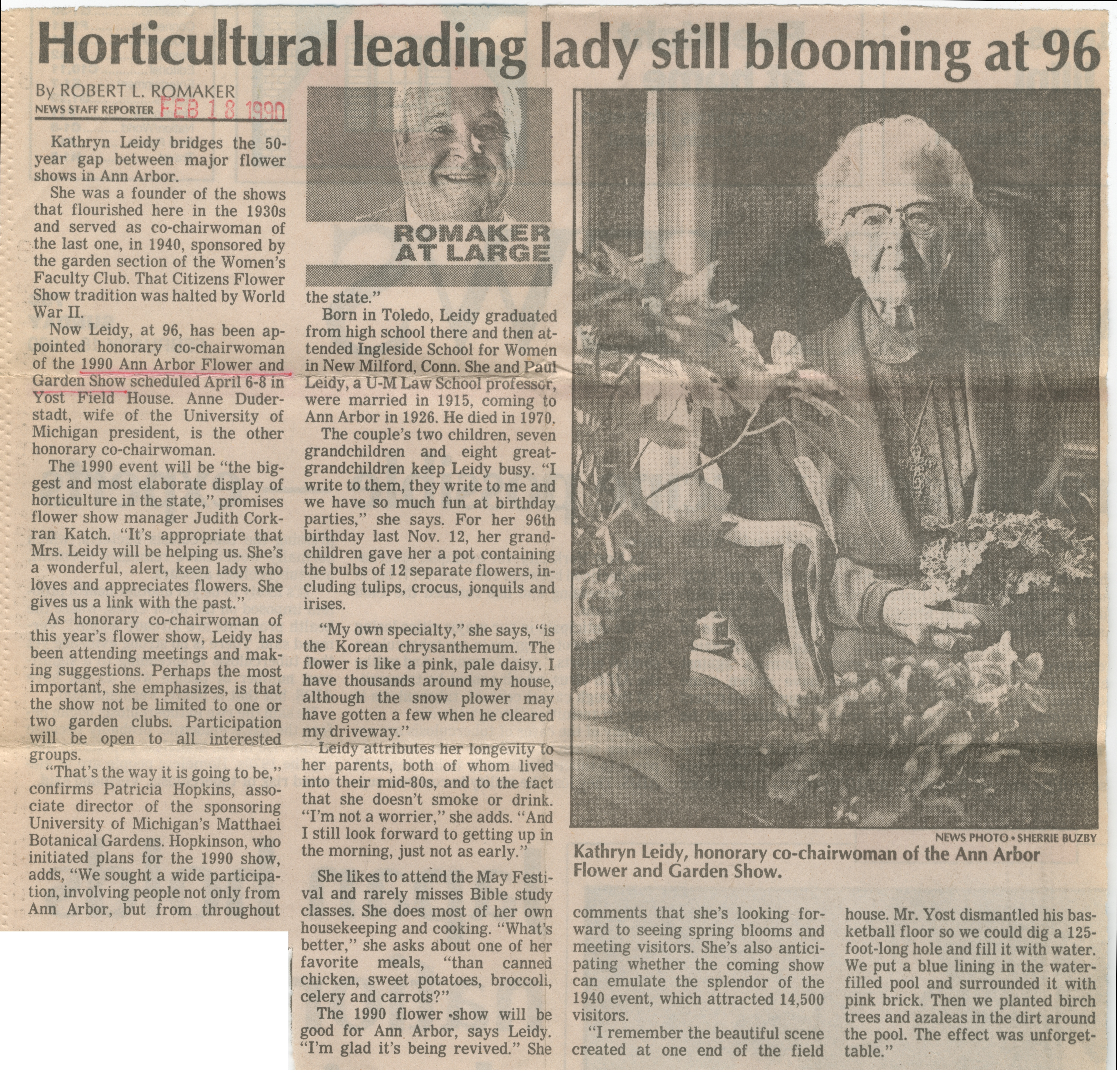 Inside a Secret Garden 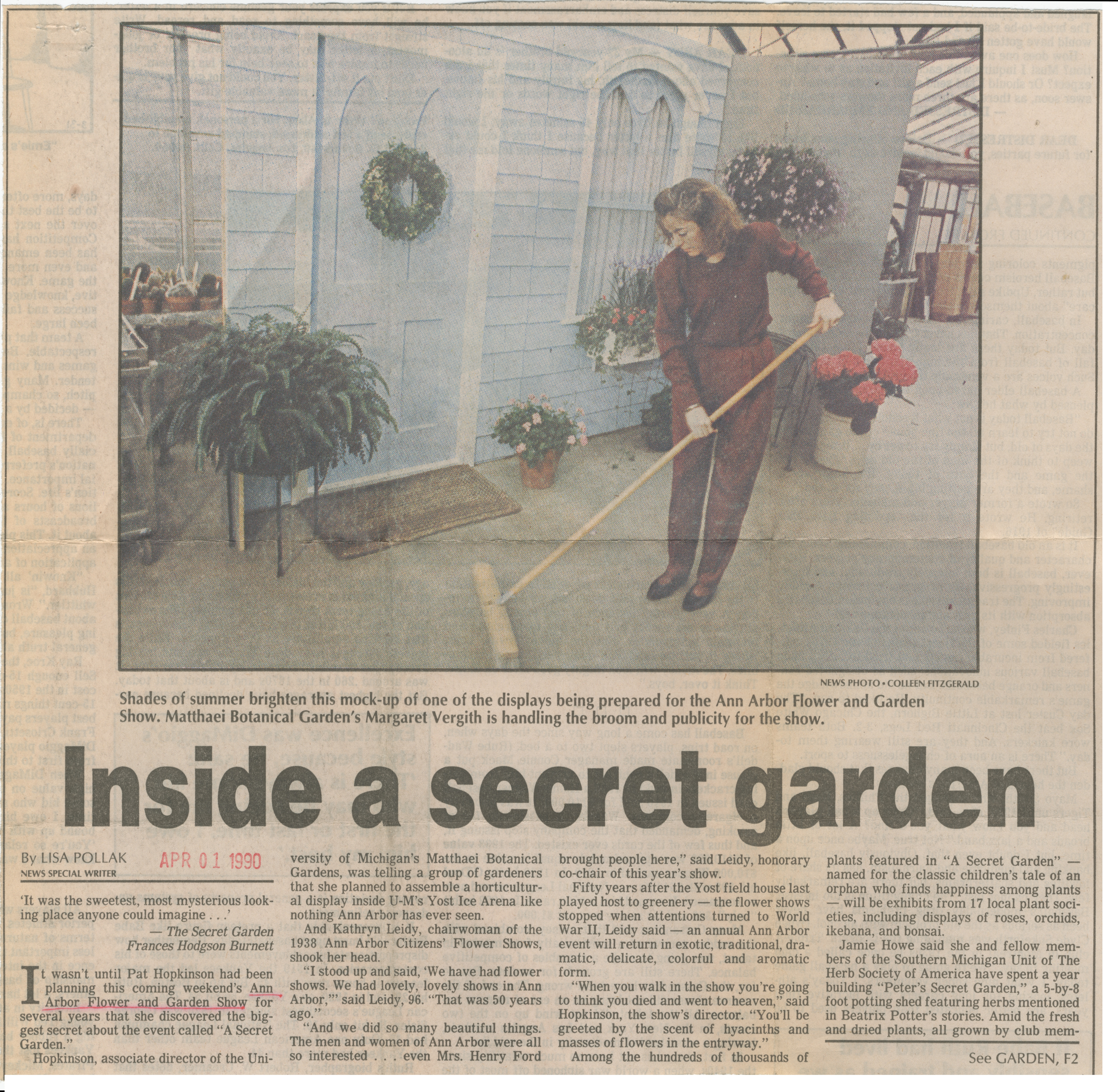 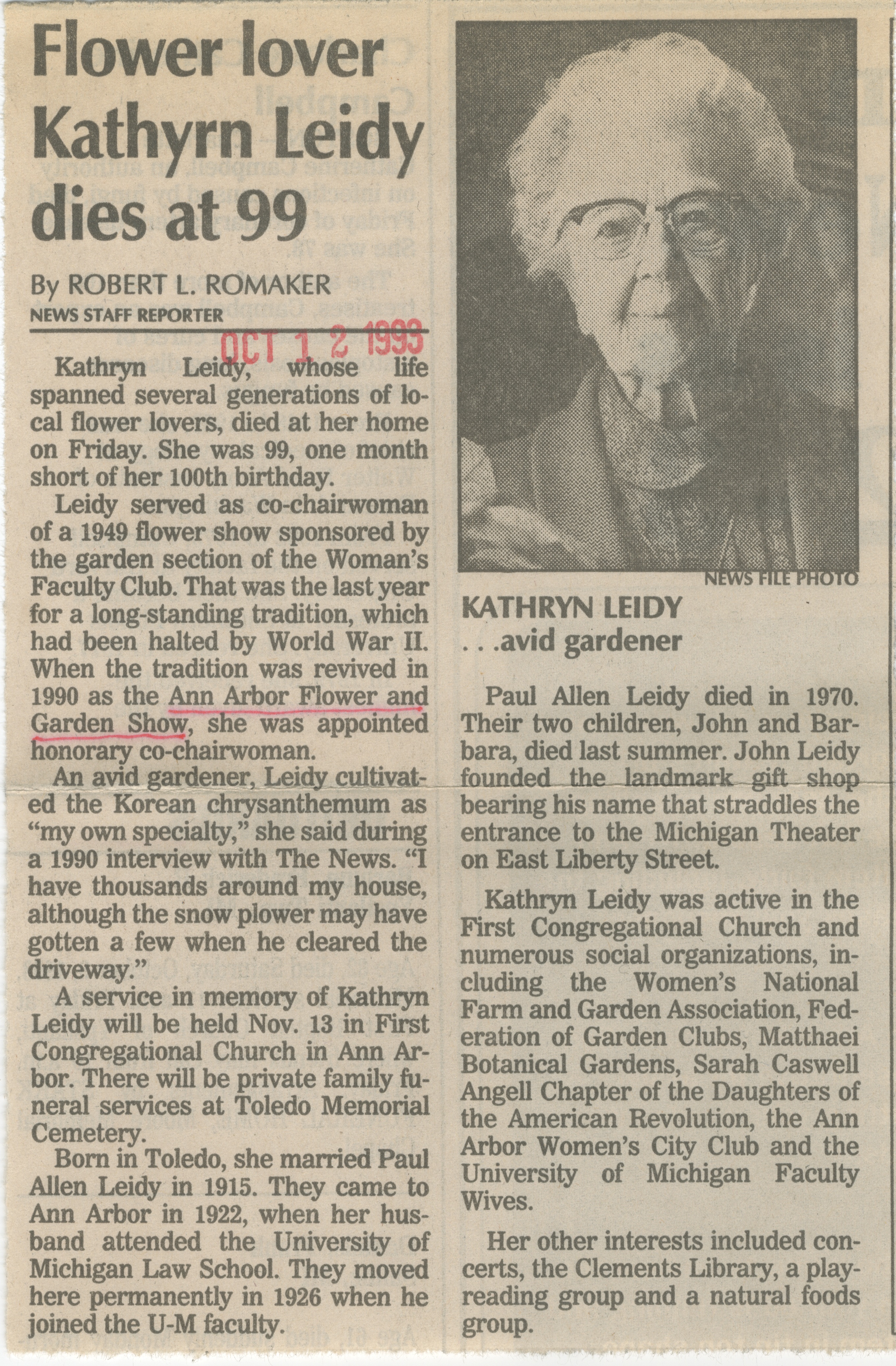 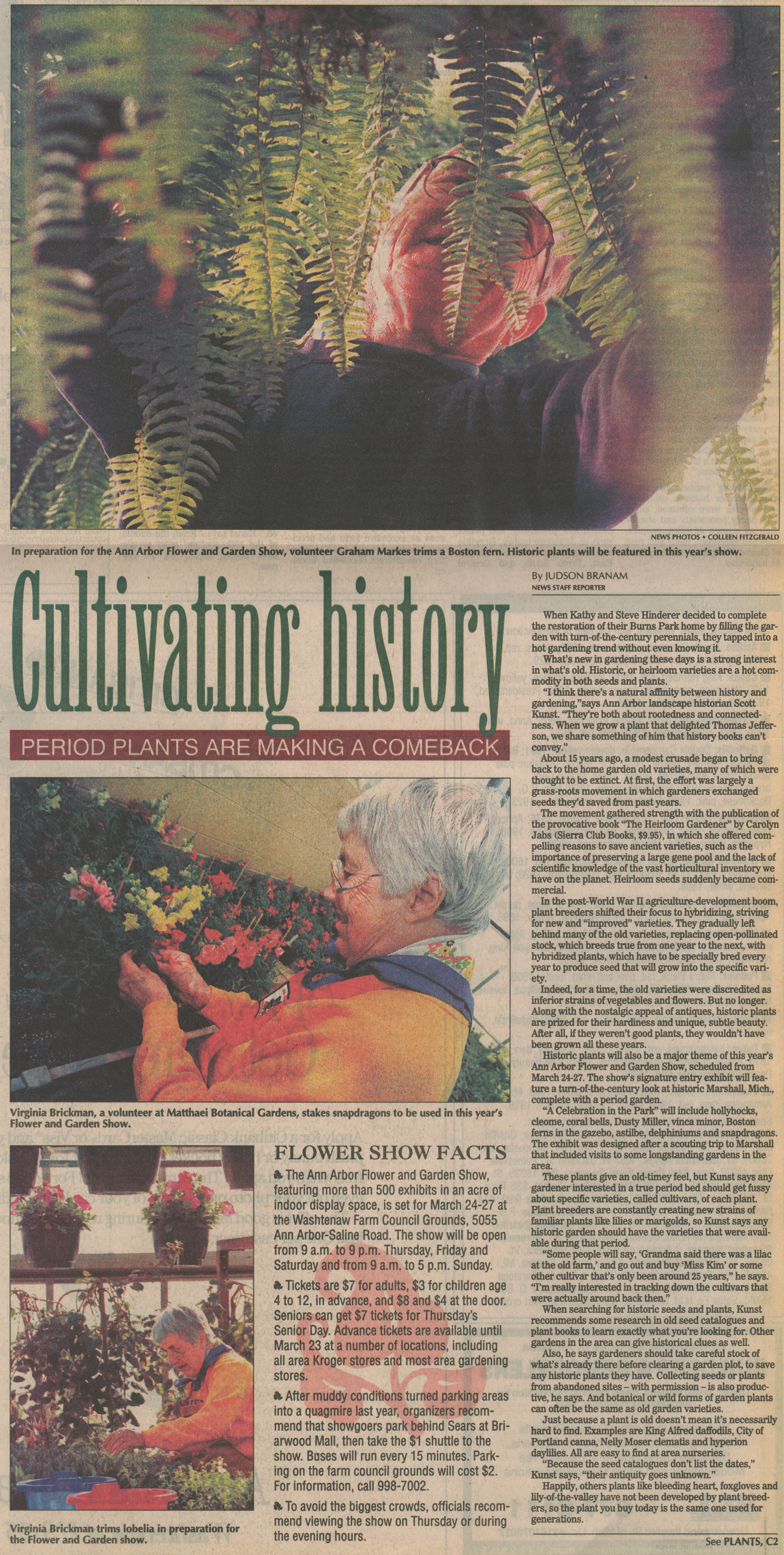