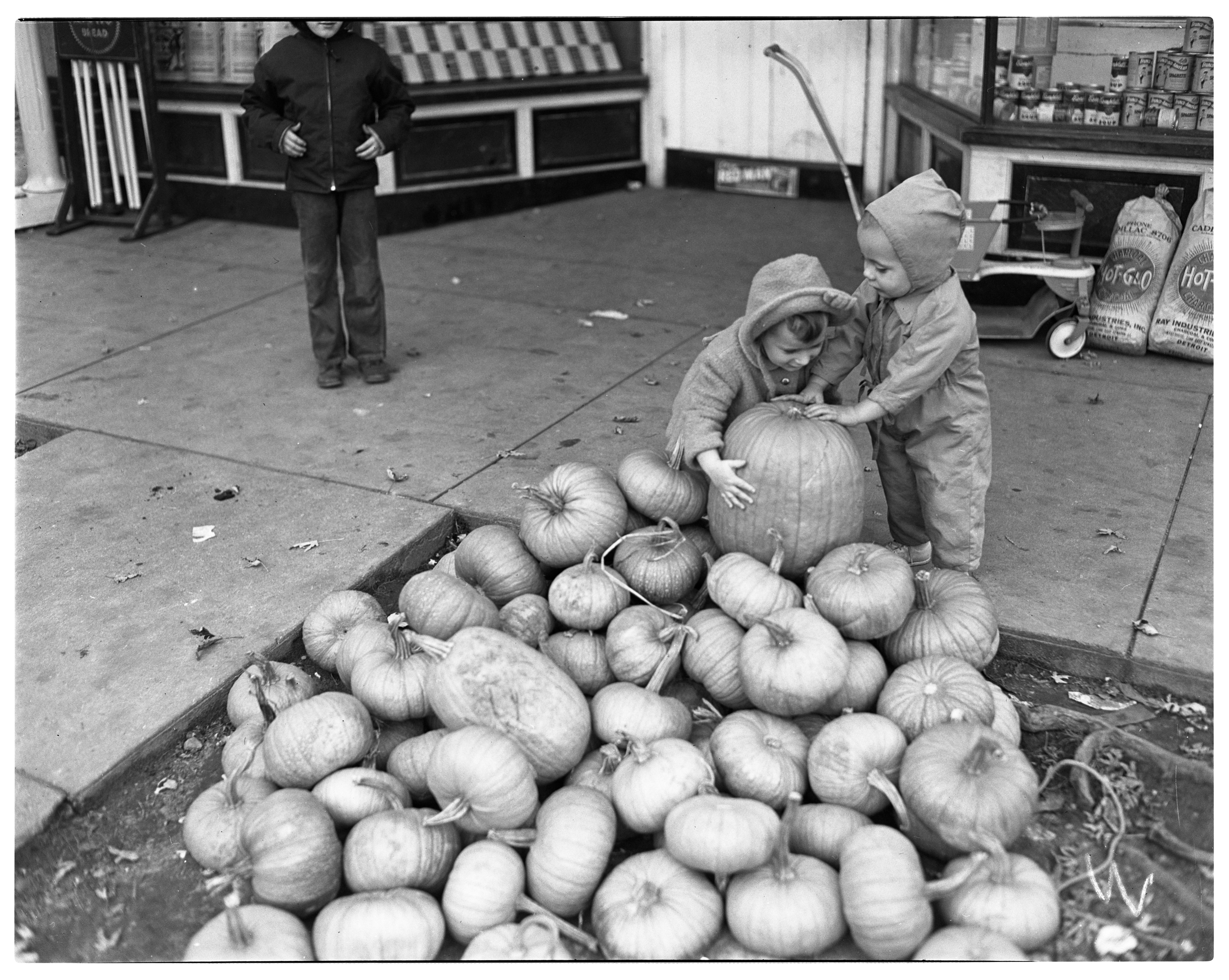 Published In
Ann Arbor News, November 1, 1947
Caption
SORTA BIG, DON'T YOU THINK? Three-year-old Vicki Jean Parks, reflecting the generosity of her father, Ray Parks, 415 W. Davis St., who yesterday gave Halloween pumpkins away to children, encouraged Bobby Moak to take the biggest pumpkin of the lot. Bobby was interested but had to settle on a much smaller one, as the big pumpkin proved too much for him to lift, let alone carry. Vicki's father, annoyed at the high prices of pumpkins at downtown stores, took a truck into the country and brought back two loads of pumpkins numbering about 200. He gave them away yesterday to the first 200 children to claim them.
Copyright
Copyright Protected 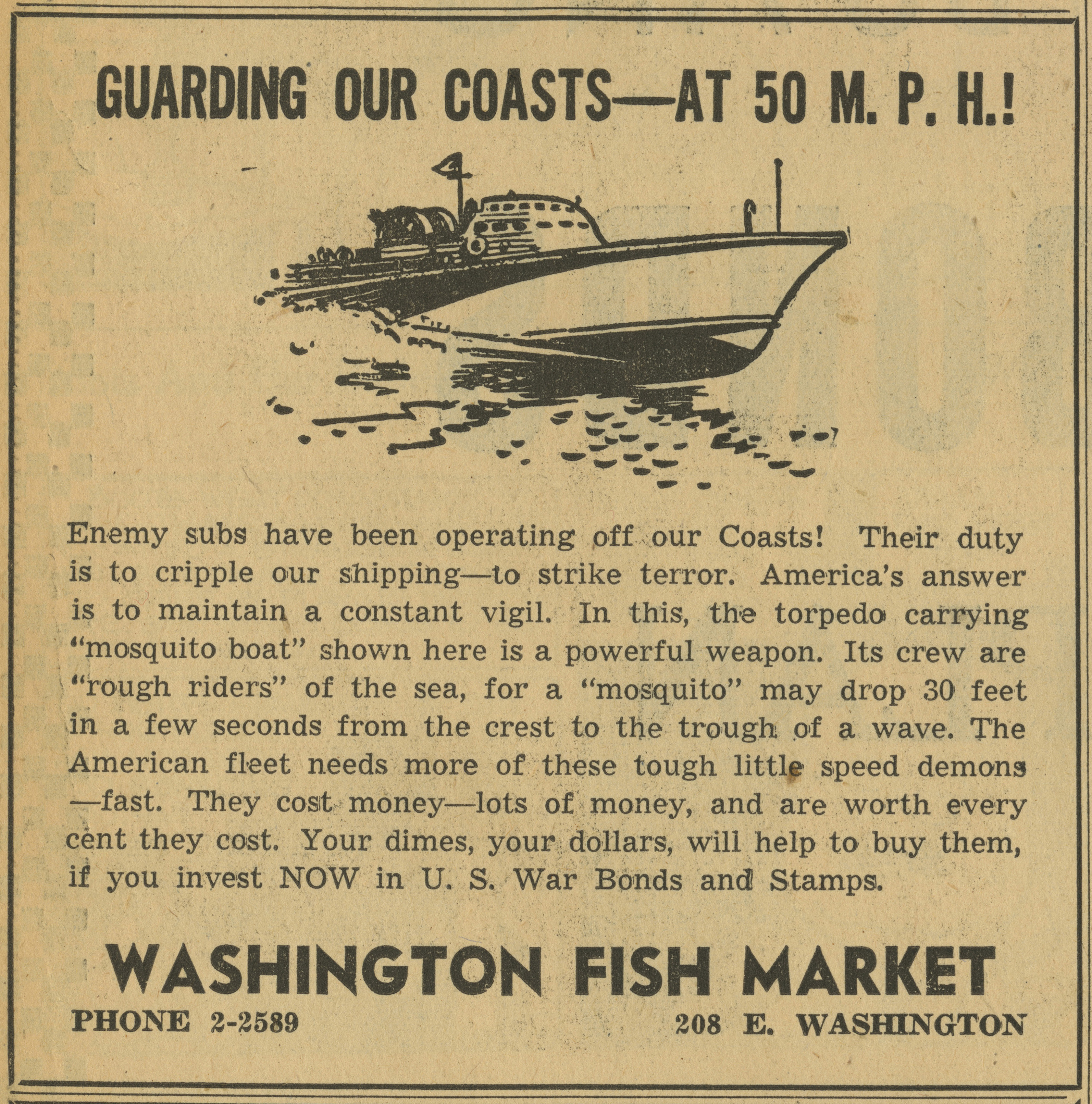 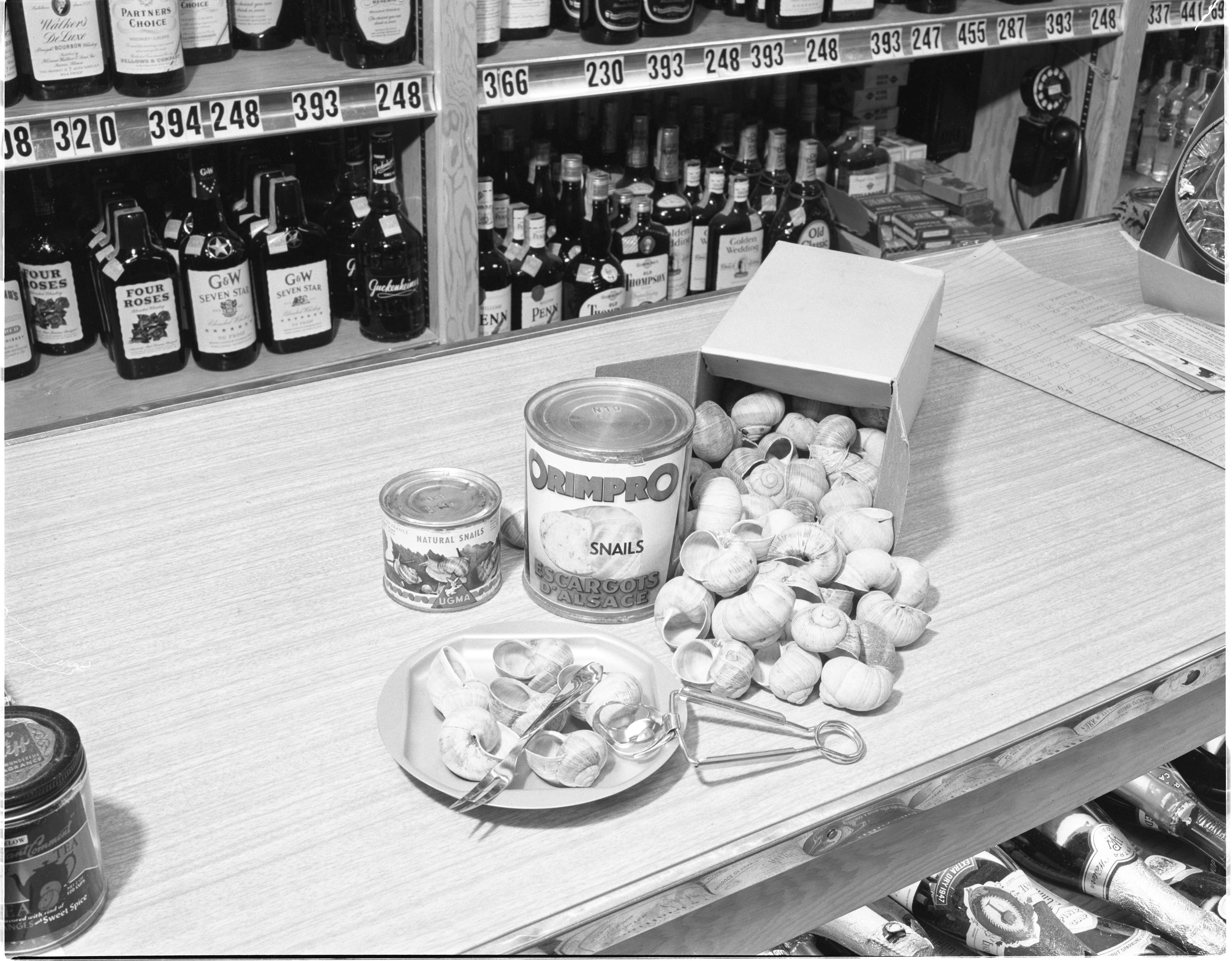 Published In
Ann Arbor News, November 5, 1955
Caption
NO PUPPY DOG TAILS: But nearly everything else in the way of exotic foods is available in Ann Arbor. Snails, it seems, come unshelled in cans, and have to be put back and then baked with garlic and other seasonings, but many of the rare foods such as fried Mexican worms and fried grasshoppers may be eaten right from the container, usually crumbled and served as hors d'oeuvres.
Copyright
Copyright Protected 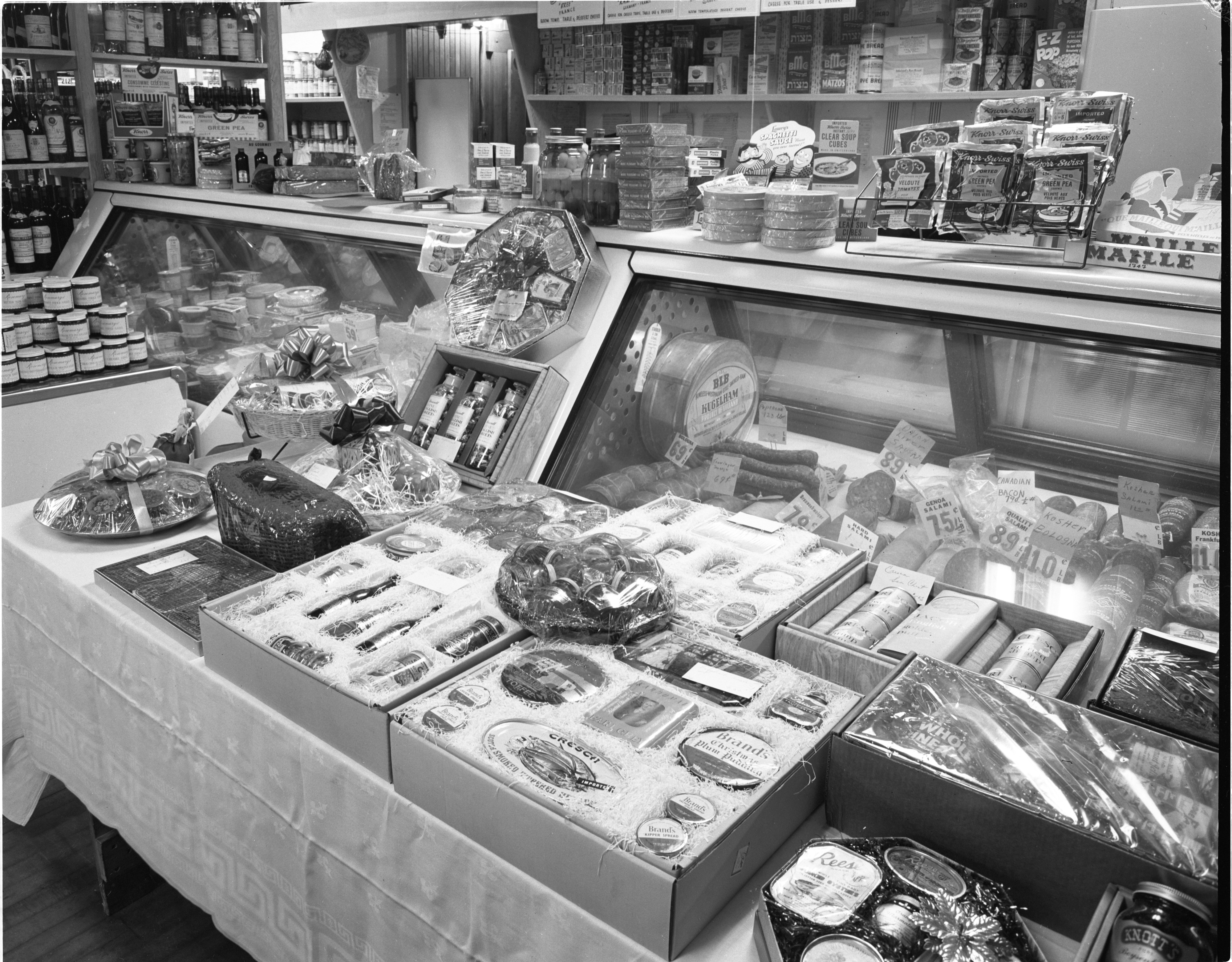 Published In
Ann Arbor News, November 5, 1955
Caption
FOR PARTY OR GIFT: If it's a thank-you gift you're seeking, or a Christmas present for someone who "has everything" these boxes of imported foods are made to order. The foods contained in the boxes are also nice to have on hand for a party, for who can resist scotch smoked kippered herring or English toffee or plum pudding?
Copyright
Copyright Protected 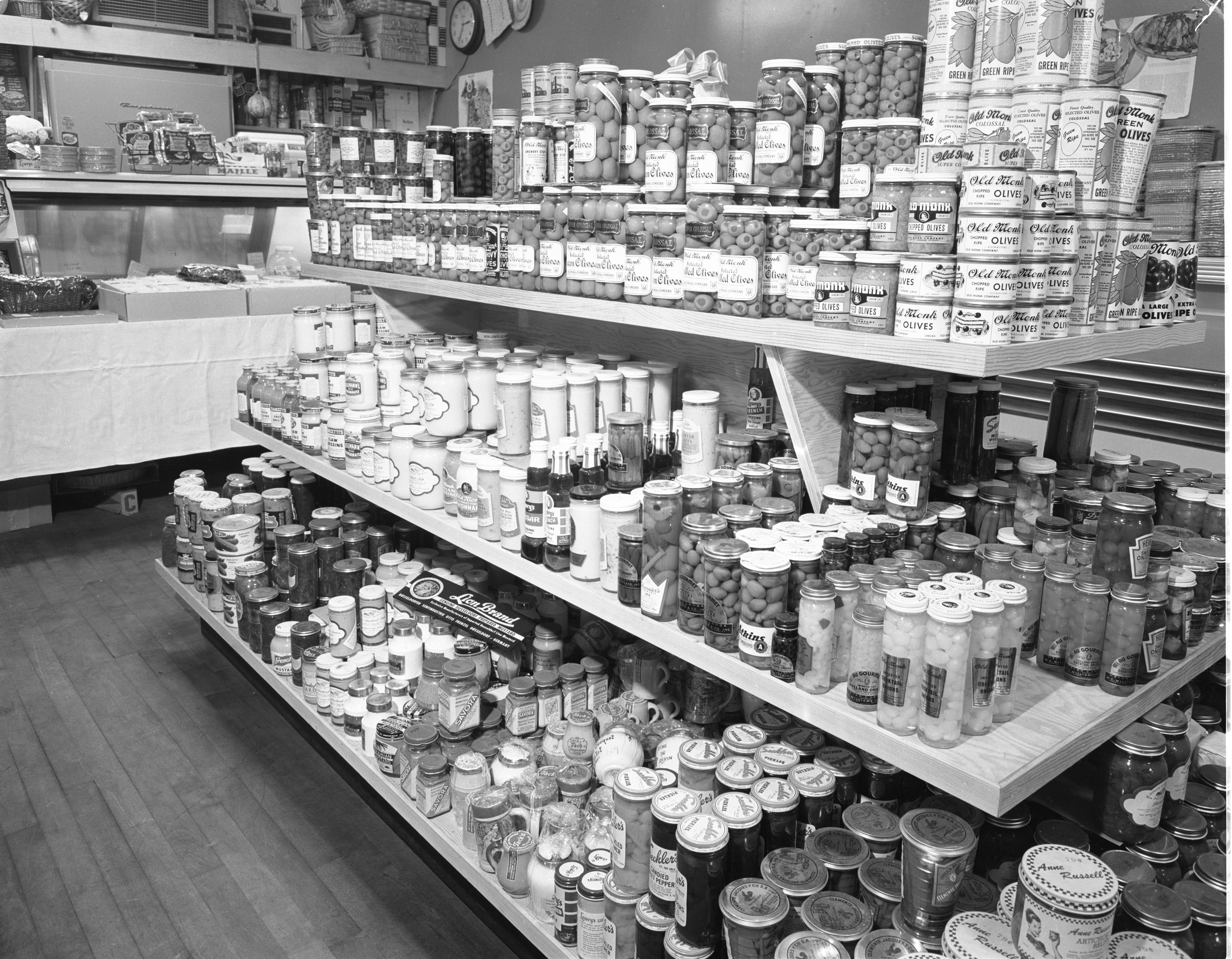 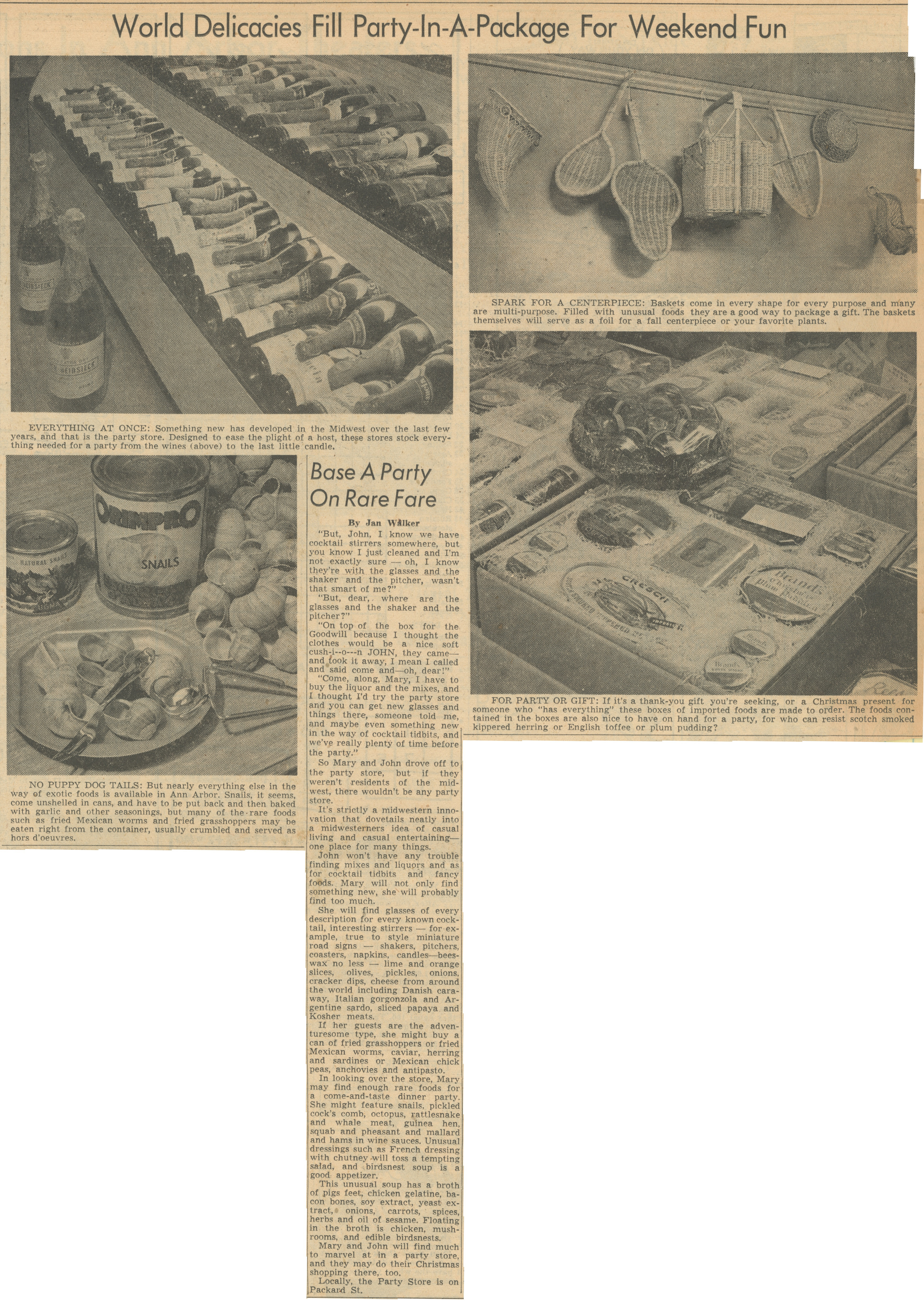 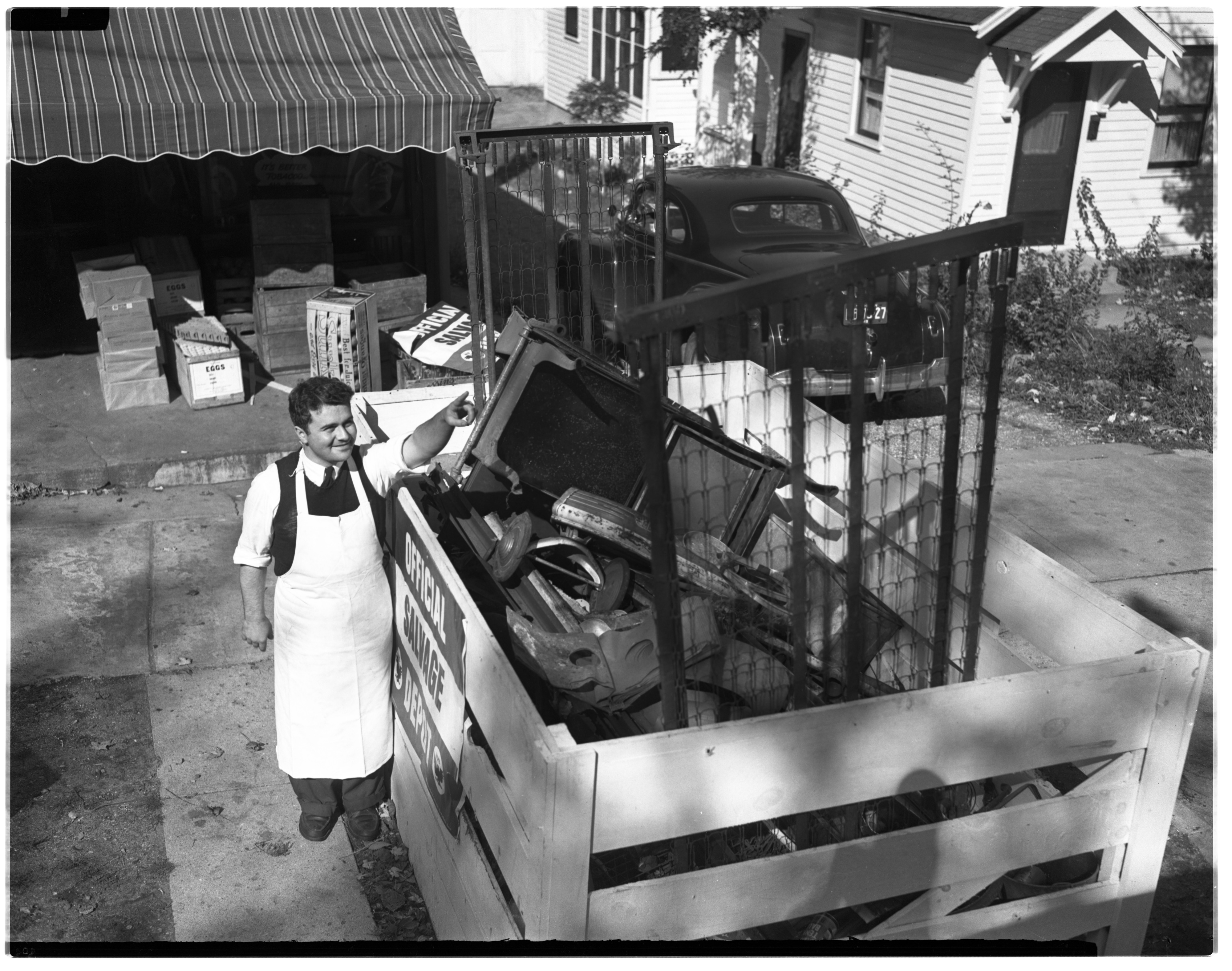 Published In
Ann Arbor News, October 7, 1942
Caption
James Anagnost (above), 929 E. Ann St., wanted to help the scrap salvage campaign: he asked CDVO officials if it would be all right for him to establish a scrap depot. They said, "Sure," so a couple of friends, Victor Sindlinger and Ralph Soaper, helped him to build this scrap/bin, and the neighbors began to fill it up with such items as radiators, kettles and springs. It shows what one man and his friends can do to get in the scrap.
Copyright
Copyright Protected 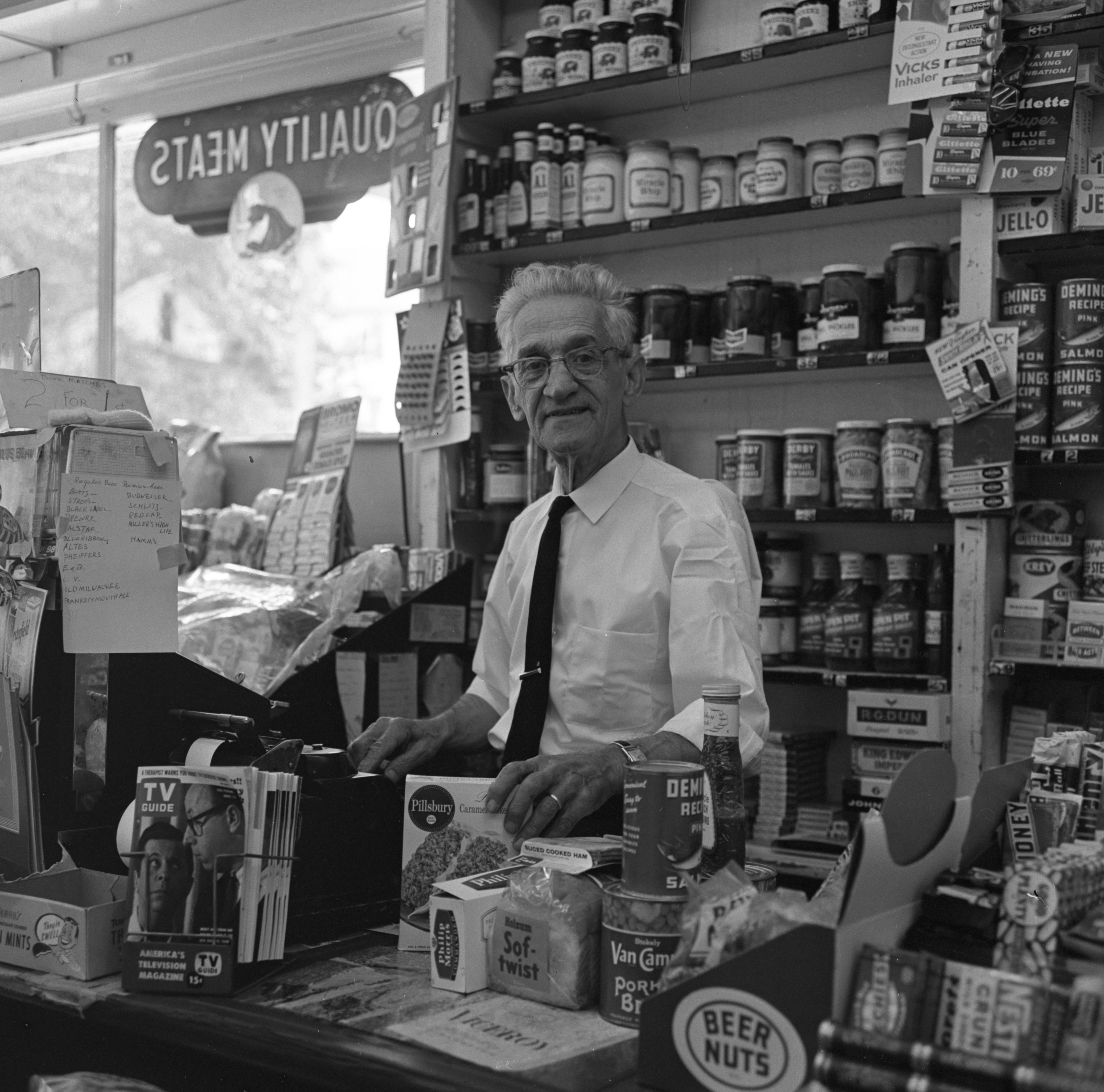 Published In
Ann Arbor News, August 2, 1963
Caption
RETIRING: Thomas Kussurelis, originally from Greece, stands behind the counter of Tom's Grocery Store at 619 N. Main St. for the final time before entering retirement at the age of 69.
Copyright
Copyright Protected 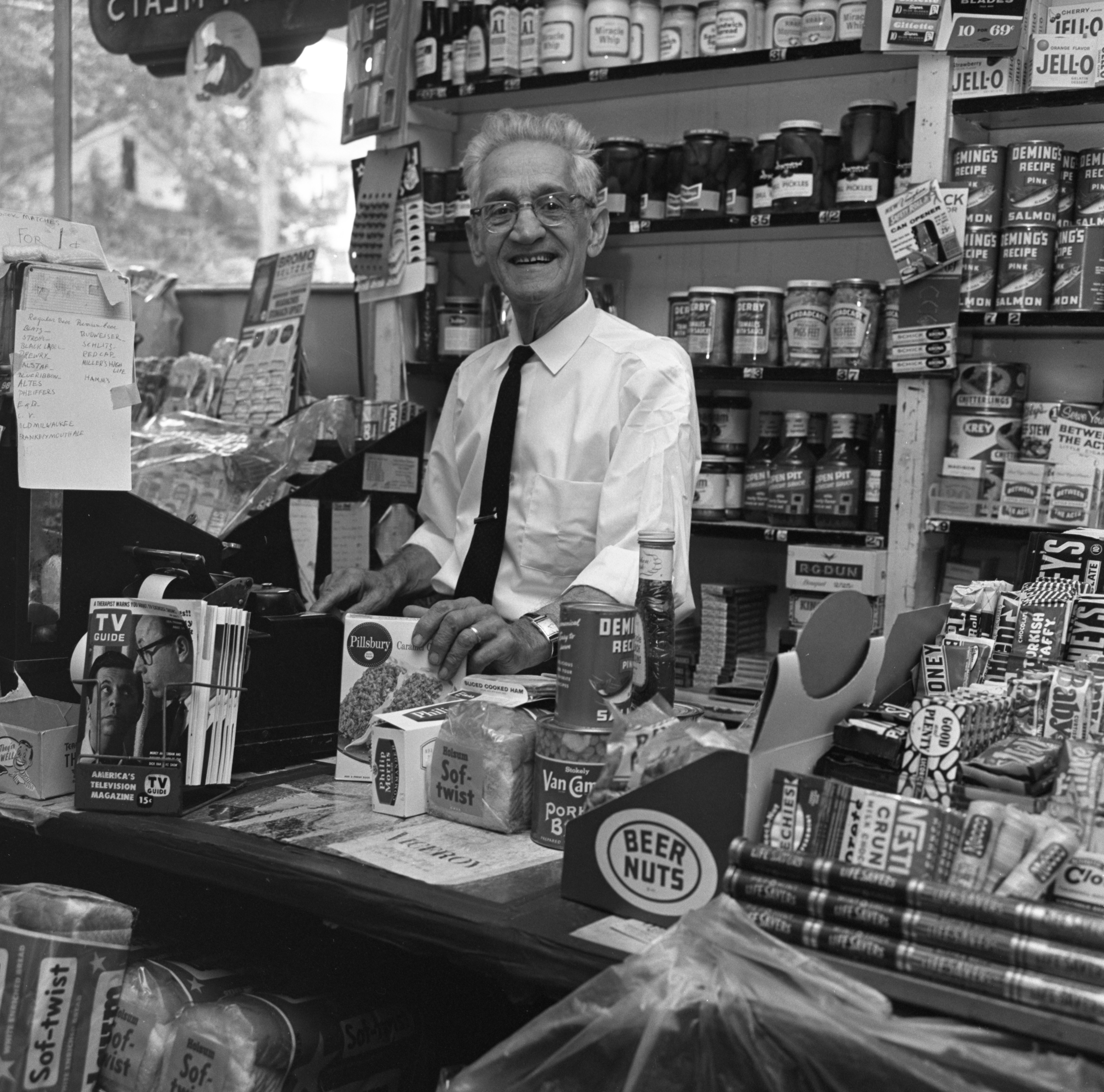 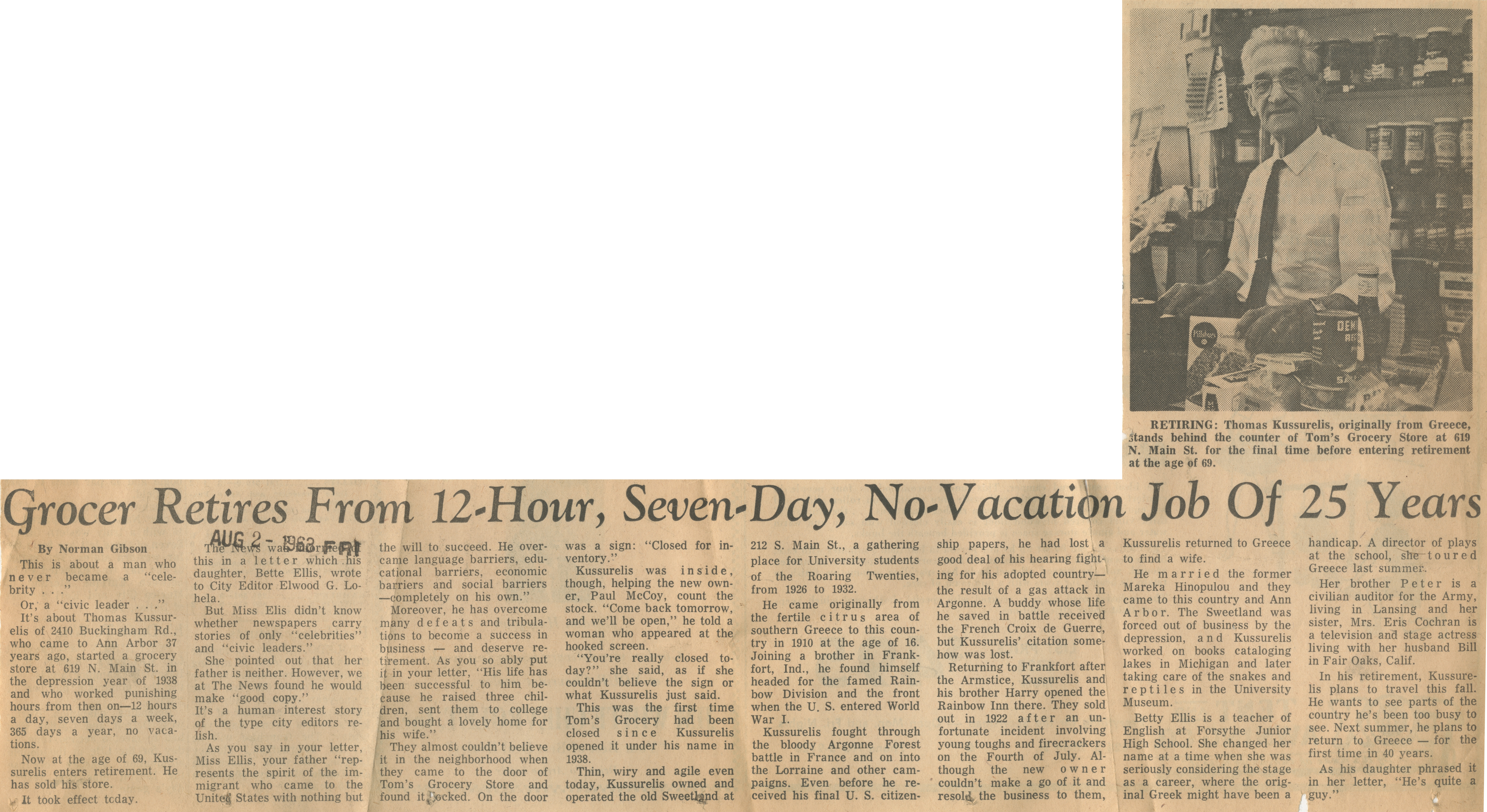