The Pere Marquette Railroad has not one but two histories—one for the twentieth century and one for the nineteenth. While the twentieth-century record of the Pere Marquette Railroad has been well studied and preserved, the nineteenth century has not been so well served. Pere Marquette: A Michigan Railroad System Before 1900 is the latest book by railroad aficionado Graydon M. Meints which aims to correct that oversight by focusing on the nineteenth-century part of the company’s past, including the men who formed and directed these early roads, and the development of the system.

The Pere Marquette Railroad was formed in 1900 by a merger of three Michigan railroad companies and lasted forty-seven years, disappearing in June 1947 by merger into the maw of the Chesapeake & Ohio Railroad. Prior to the 1900 merger, the Pere Marquette Railroad’s predecessors made up a motley collection of disconnected and unaffiliated short, local rail lines. After the financial panic of 1893, and with some commonality of ownership, the companies worked together more closely. Before the end of the decade, the three main railroads—the Flint & Pere Marquette; the Detroit, Lansing & Northern; and the Chicago & West Michigan—had decided that the only way to maintain solvency was to merge.

Using a plethora of primary sources including railway timetables and maps, this work lends insight into the little-known corporate business history of the Pere Marquette Railroad.

Martin Bandyke Under Covers for November 2020 : Martin interviews Ken Fischer, author of Everybody In, Nobody Out: Inspiring Community at Michigan’s University Musical Society.

Housed on the campus of the University of Michigan in Ann Arbor, the University Musical Society is one of the oldest performing arts presenters in the country. A past recipient of the National Medal of Arts, the nation's highest public artistic honor, UMS connects audiences with wide-ranging performances in music, dance, and theater each season. Between 1987 and 2017, UMS was led by Ken Fischer, who over three decades pursued an ambitious campaign to expand and diversify the organization's programming and audiences--initiatives inspired by Fischer's overarching philosophy toward promoting the arts, "Everybody In, Nobody Out."

The approach not only deepened UMS's engagement with the university and southeast Michigan communities, it led to exemplary partnerships with distinguished artists across the world. Under Fischer's leadership, UMS hosted numerous breakthrough performances, including the Vienna Philharmonic's final tour with Leonard Bernstein, appearances by then relatively unknown opera singer Cecilia Bartoli, a multiyear partnership with the Royal Shakespeare Company, and artists as diverse as Yo-Yo Ma, Elizabeth Streb, and Nusrat Fateh Ali Khan.

Though peppered with colorful anecdotes of how these successes came to be, this book is neither a history of UMS nor a memoir of Fischer's significant accomplishments with the organization. Rather it is a reflection on the power of the performing arts to engage and enrich communities--not by handing down cultural enrichment from on high, but by meeting communities where they live and helping them preserve cultural heritage, incubate talent, and find ways to make community voices heard.

Nancy Emmons Taylor was born in 1941 and grew up in Luxmanor, Maryland. She attended Earlham College in Richmond, Indiana. She married Thomas Taylor soon after graduating, and they had two children. She received her Masters from the University of Michigan School of Public Health. When their children had graduated from high school, the Tayors moved to London for 12 years. Thomas was the administrator of an international Quaker program and Nancy was the warden of the Quaker meeting house and ran a program for international diplomats.

Nancy Taylor was interviewed by students from Skyline High School in Ann Arbor in 2014 as part of the Legacies Project. 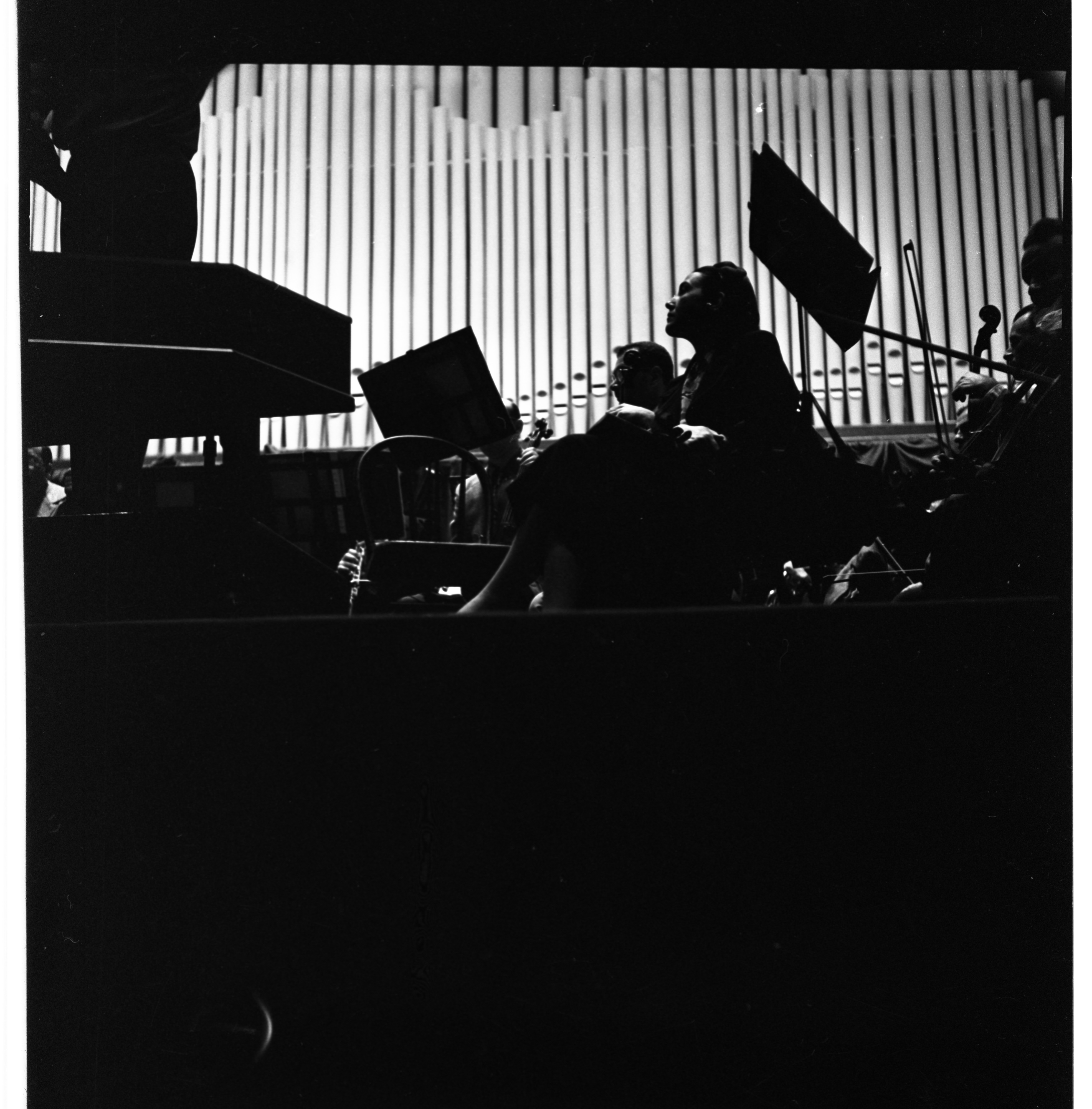 Published In
Ann Arbor News, May 5, 1950
Caption
OPERA STAR BLANCHE THEBOM WATCHES REHEARSAL: Contralto Blanche Thebom, who will be one of the soloists in tonight's performance of Bach's "Magnificat," watched the rehearsal intently. After Miss Welitch and Ormandy completed their hour of work, Thor Johnson directed part of the orchestra, the Choral Union, and soloists in a rehearsal for tonight's concert. Both Miss Thebom and Miss Welitch are members of the Metropolitan Opera Co.
Copyright
Copyright Protected 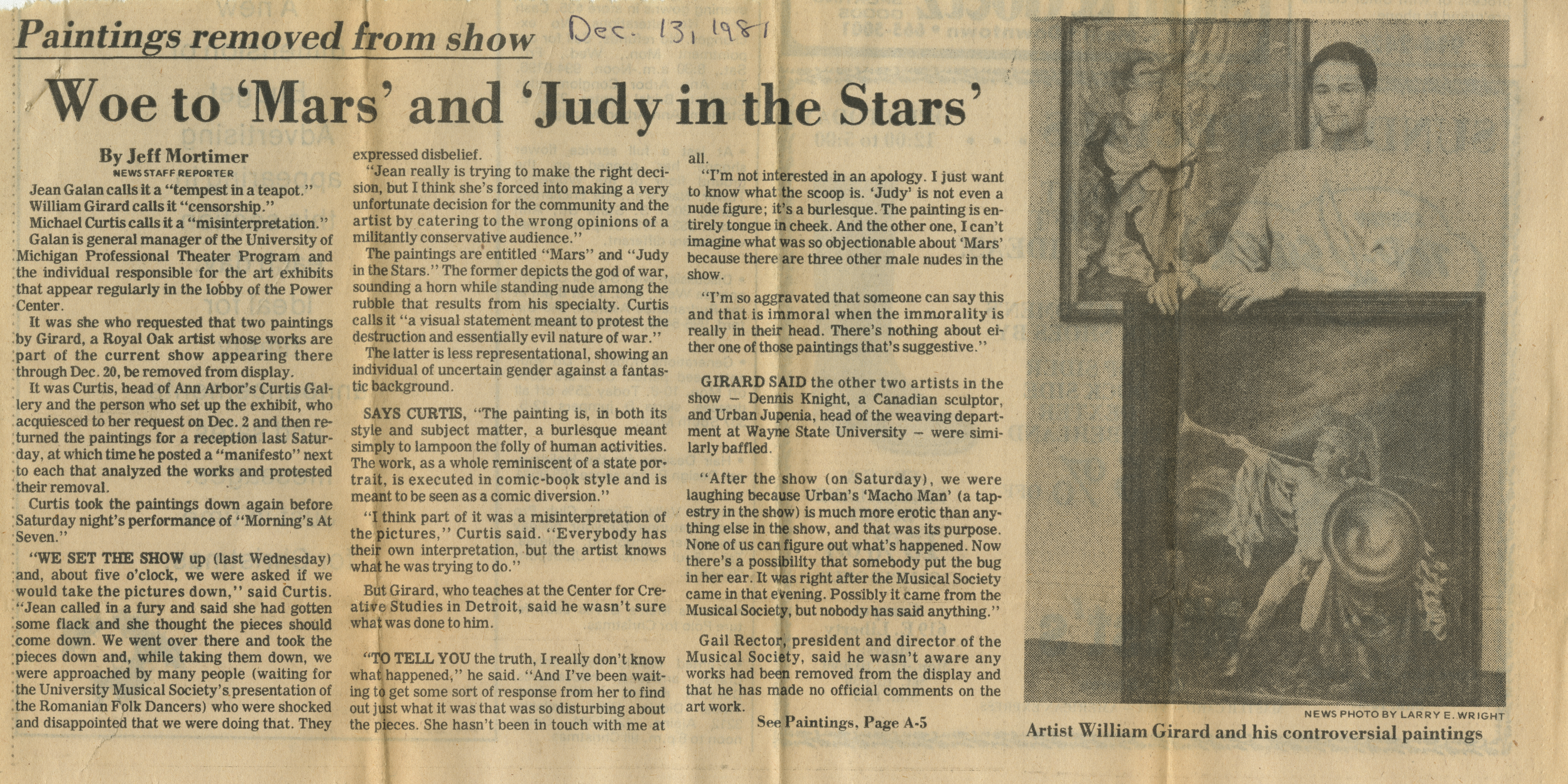 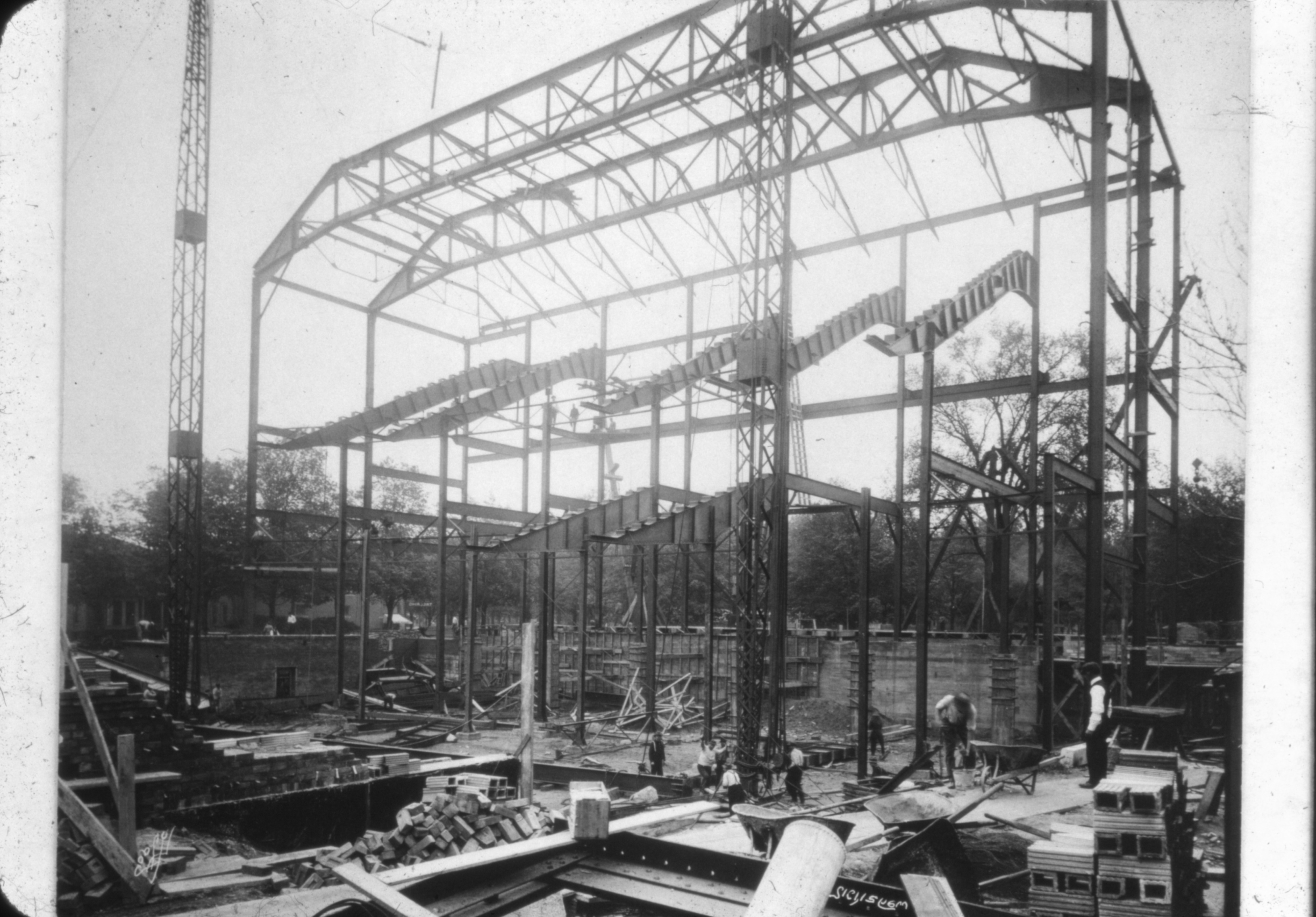 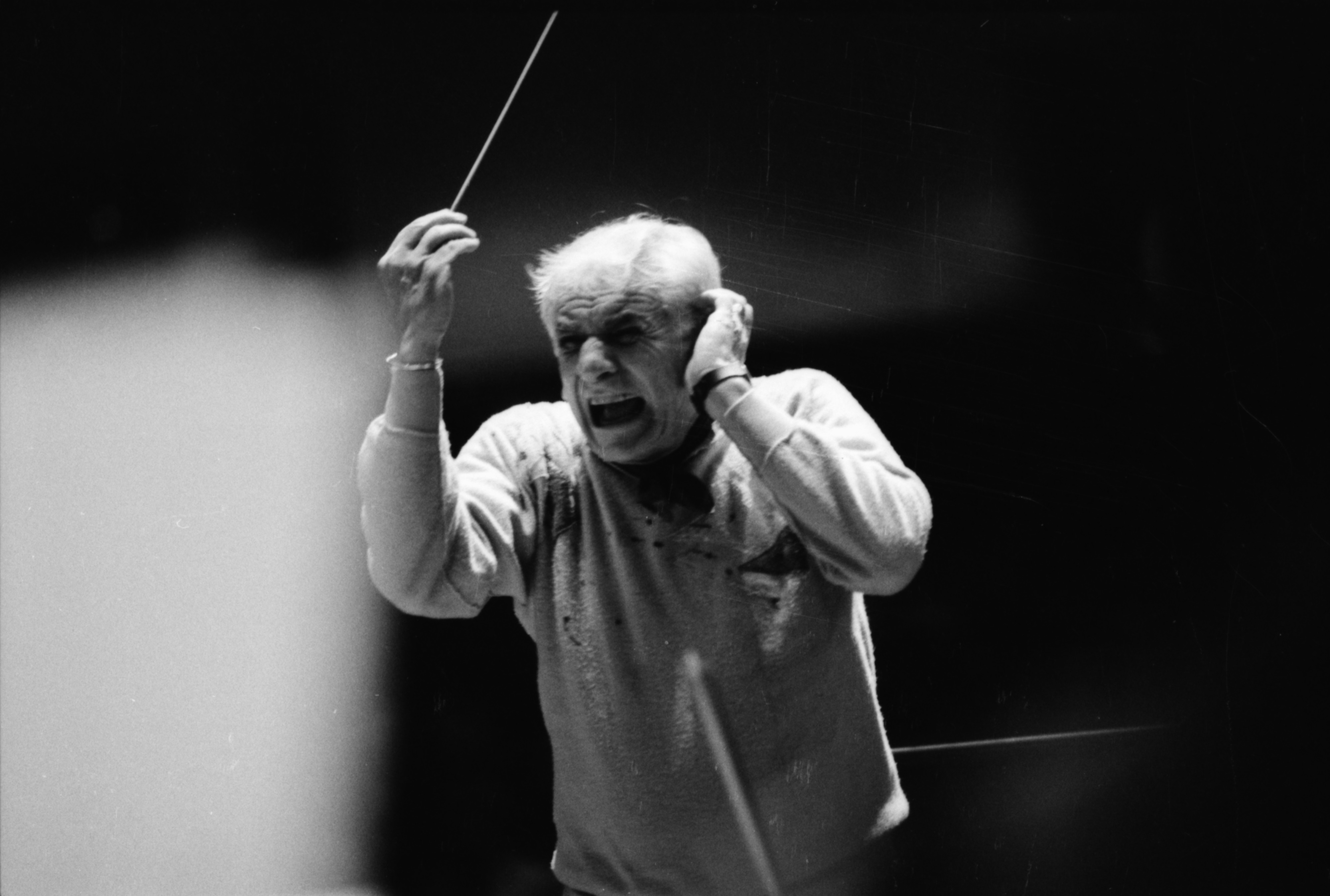 Published In
Ann Arbor News, February 16, 1984
Caption
More than words are involved when Leonard Bernstein makes music. There are his face and his baton and his body, and the energy they all transmit. And, because Wednesday's rehearsal was open to the media, there are these pictures by News Chief Photographer Jack Stubbs.
Copyright
Copyright Protected 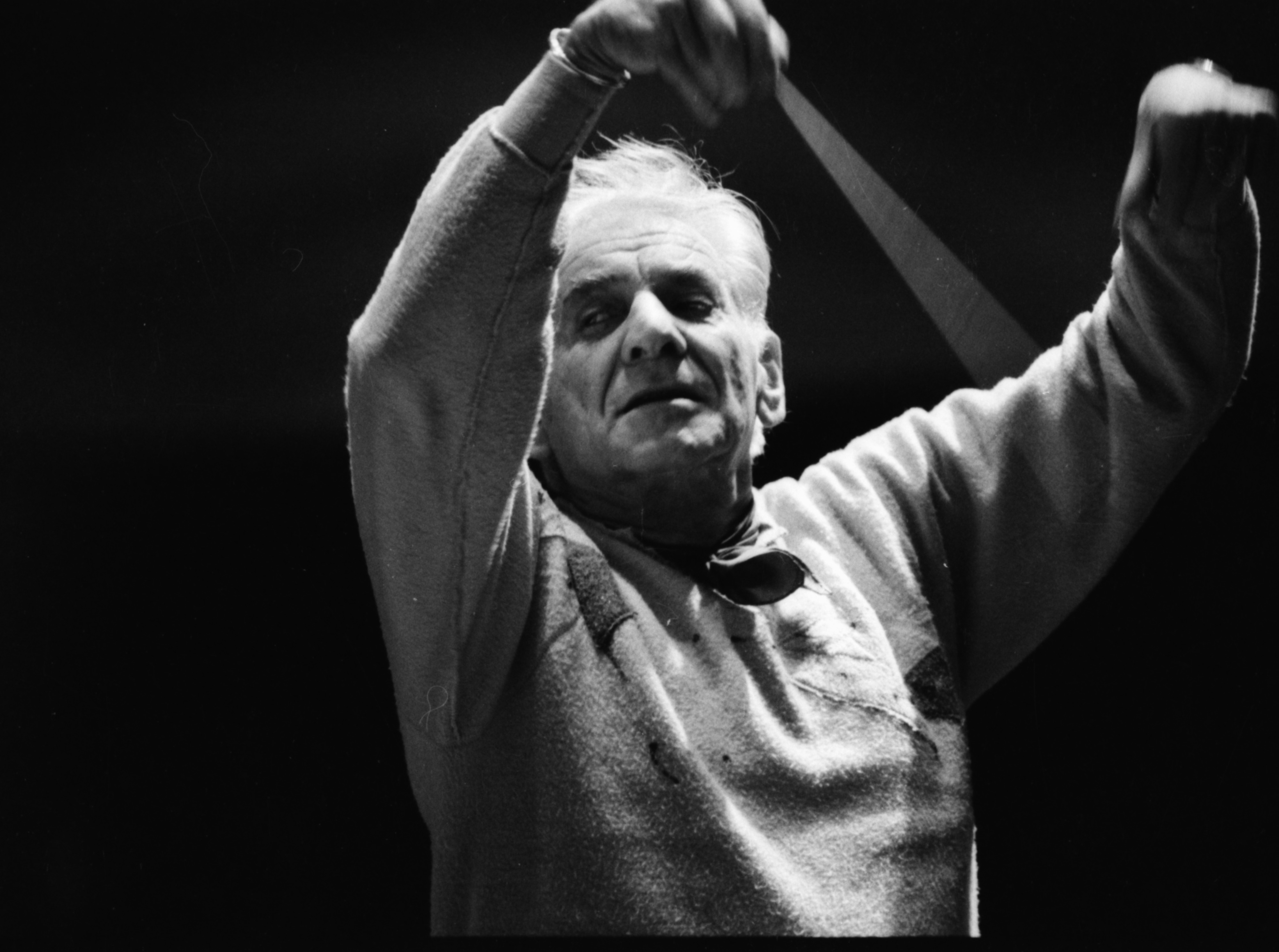 Published In
Ann Arbor News, February 16, 1984
Caption
More than words are involved when Leonard Bernstein makes music. There are his face and his baton and his body, and the energy they all transmit. And, because Wednesday's rehearsal was open to the media, there are these pictures by News Chief Photographer Jack Stubbs.
Copyright
Copyright Protected
Subscribe to University Musical Society (UMS)