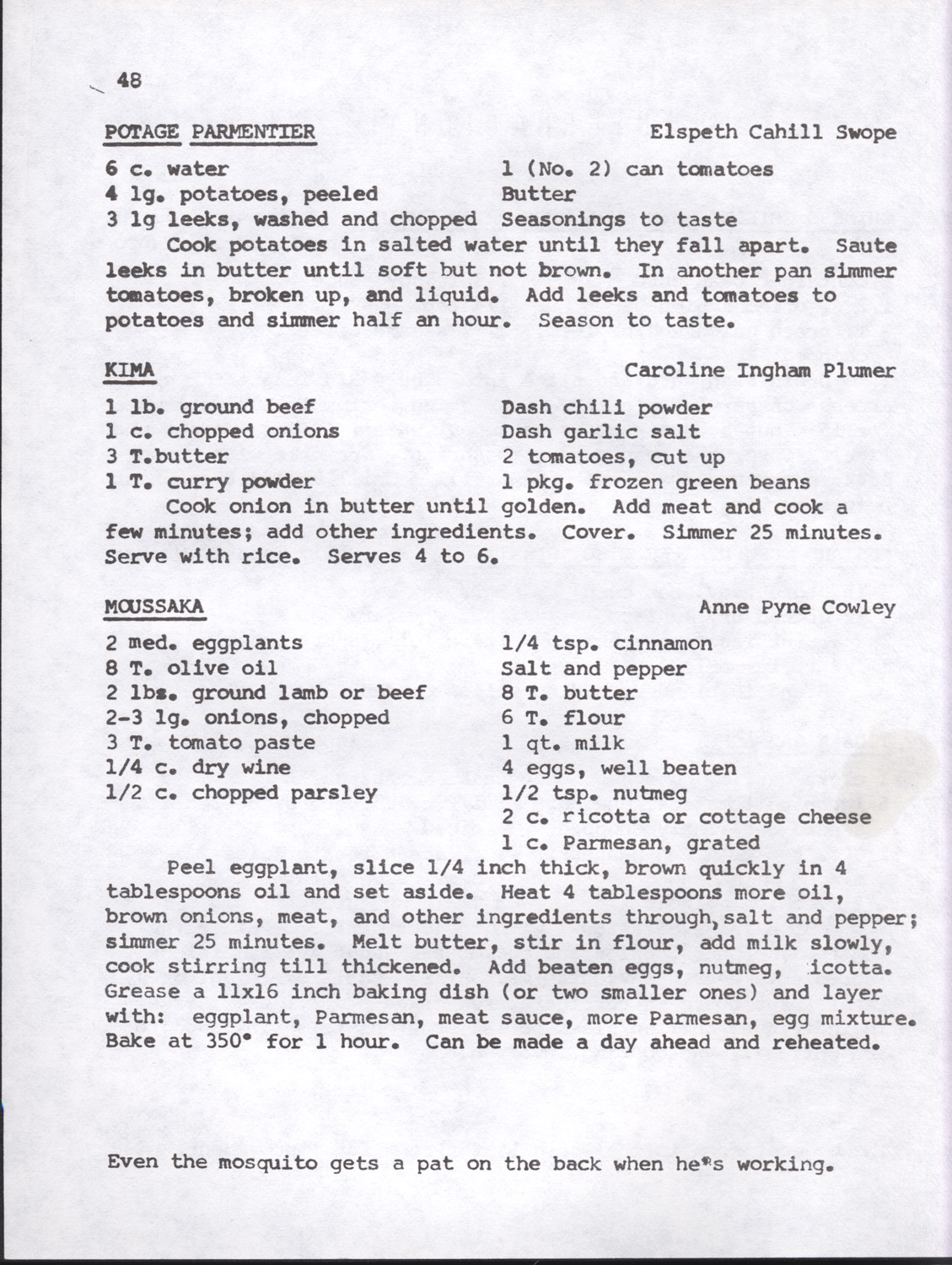 Cook potatoes in salted water until they fall apart. Saute leeks in butter until soft but not brown. In another pan simmer tomatoes, broken up, and liquid. Add leeks and tomatoes to potatoes and simmer half an hour. Season to taste. 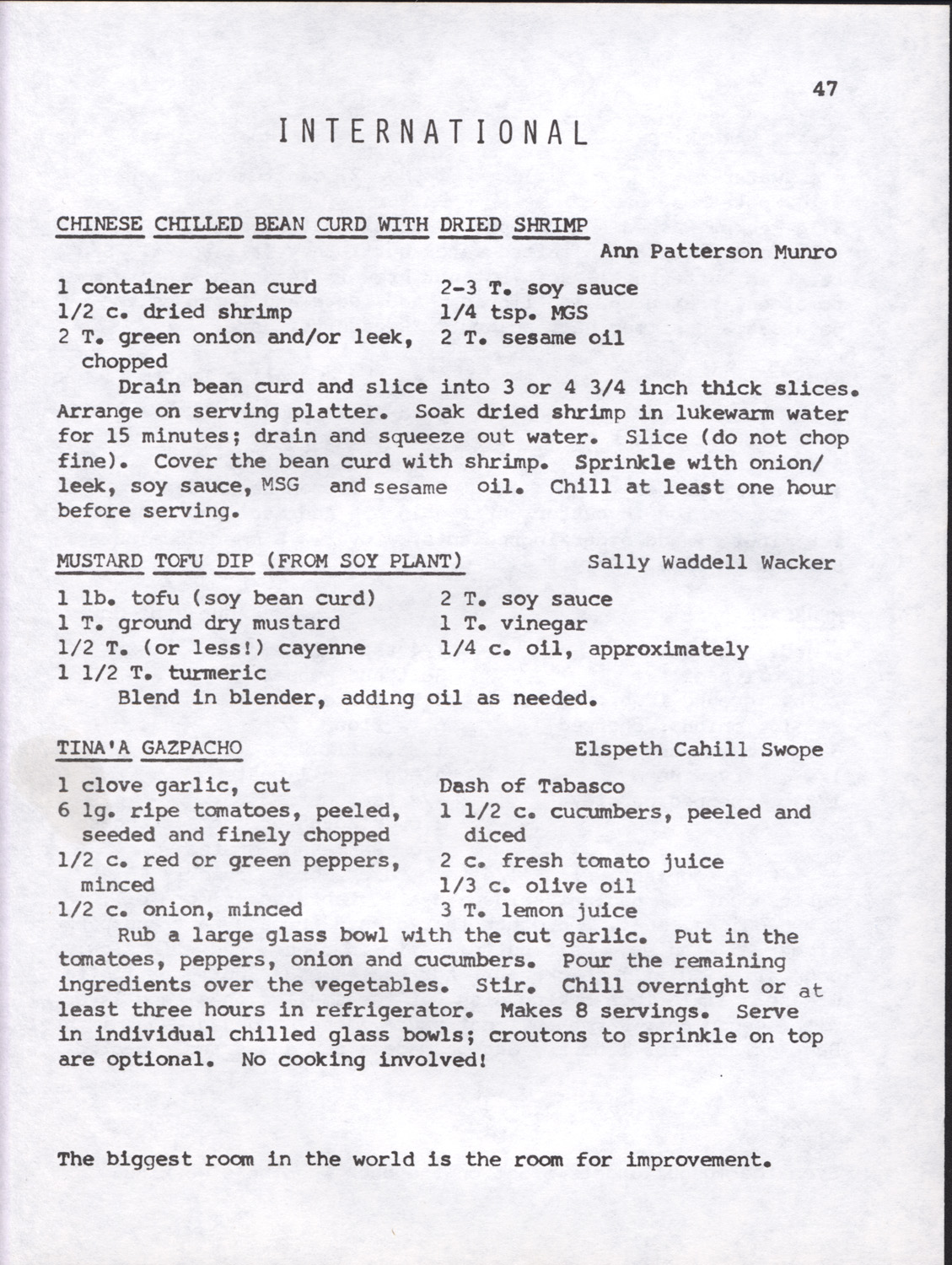 Rub a large glass bowl with the cut garlic. Put in the tomatoes, peppers, onion and cucumbers. Pour the remaining ingredients over the vegetables. stir. Chill overnight or at least three hours in refrigerator. Makes 8 servings. Serve in individual chilled glass bowls; croutons to sprinkle on top are optional. No cooking involved!

The biggest room in the world is the room for improvement. 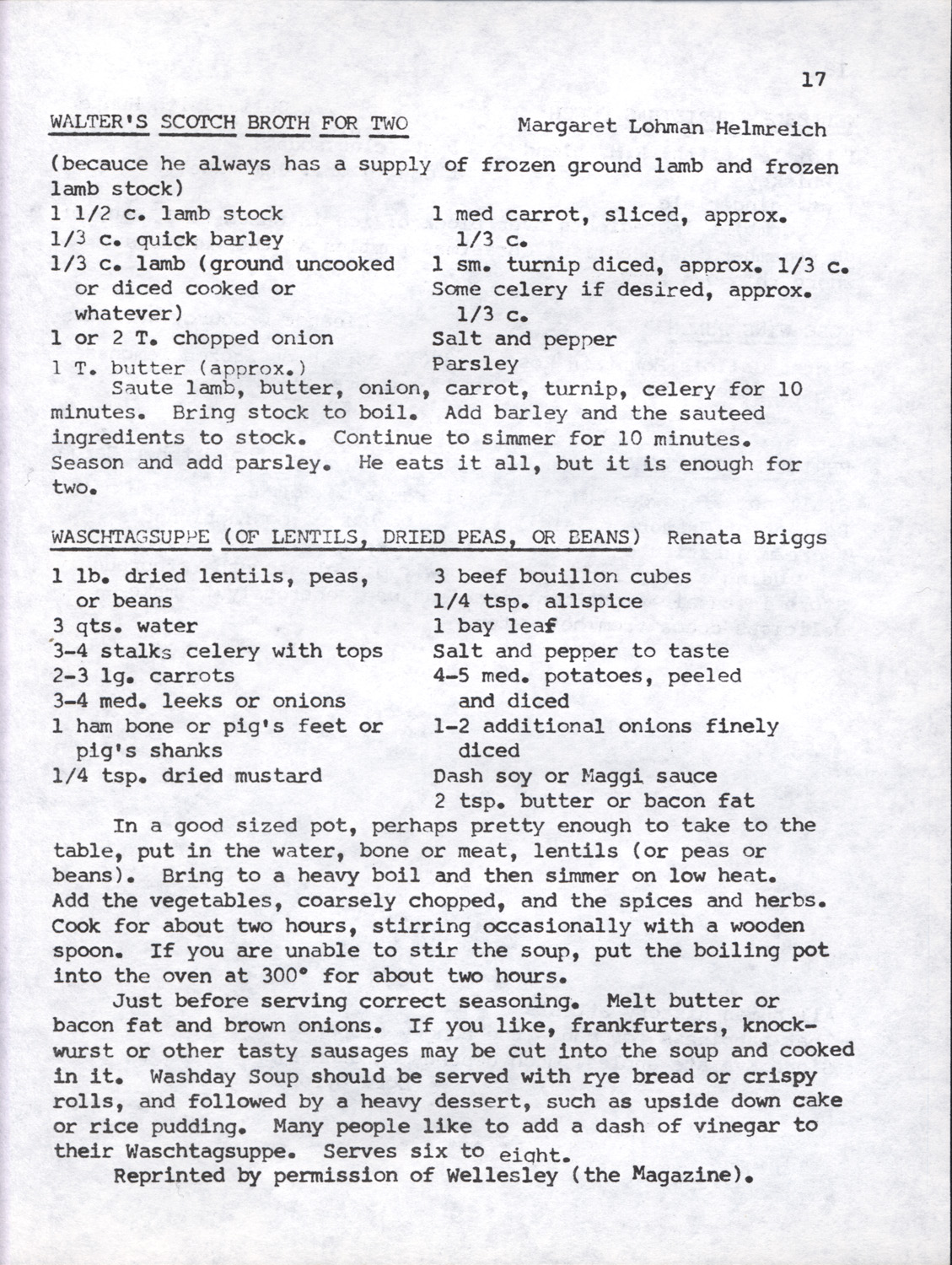 In a good sized pot, perhaps pretty enough to take to the table, put in the water, bone or meat, lentils (or peas or beans). Bring to a heavy boil and then simmer on low heat. Add the vegetables, coarsely chopped, and the spices and herbs. Cook for about two hours, stirring occasionally with a wooden spoon. If you are unable to stir the soup, put the boiling pot into the oven at 300 degrees for about two hours.

Just before serving correct seasoning. Melt butter or bacon fat and brown onions. If you like, frankfurters, knockwurst or other tasty sausages may be cut into the soup and cooked in it. Washday Soup should be served with rye bread or crispy rolls, and followed by a heavy dessert, such as upside down cake or rice pudding. Many people like to add a dash of vinegar to their Waschtagsuppe. Serves six to eight.

Reprinted by permission of Wellesley (the Magazine).

Saute lamb, butter, onion, carrot, turnip, celery for 10 minutes. Bring stock to boil. Add barley and the sauteed ingredients to stock. Continue to simmer for 10 minutes. Season and add parsley. He eats it all, but it is enough for two. 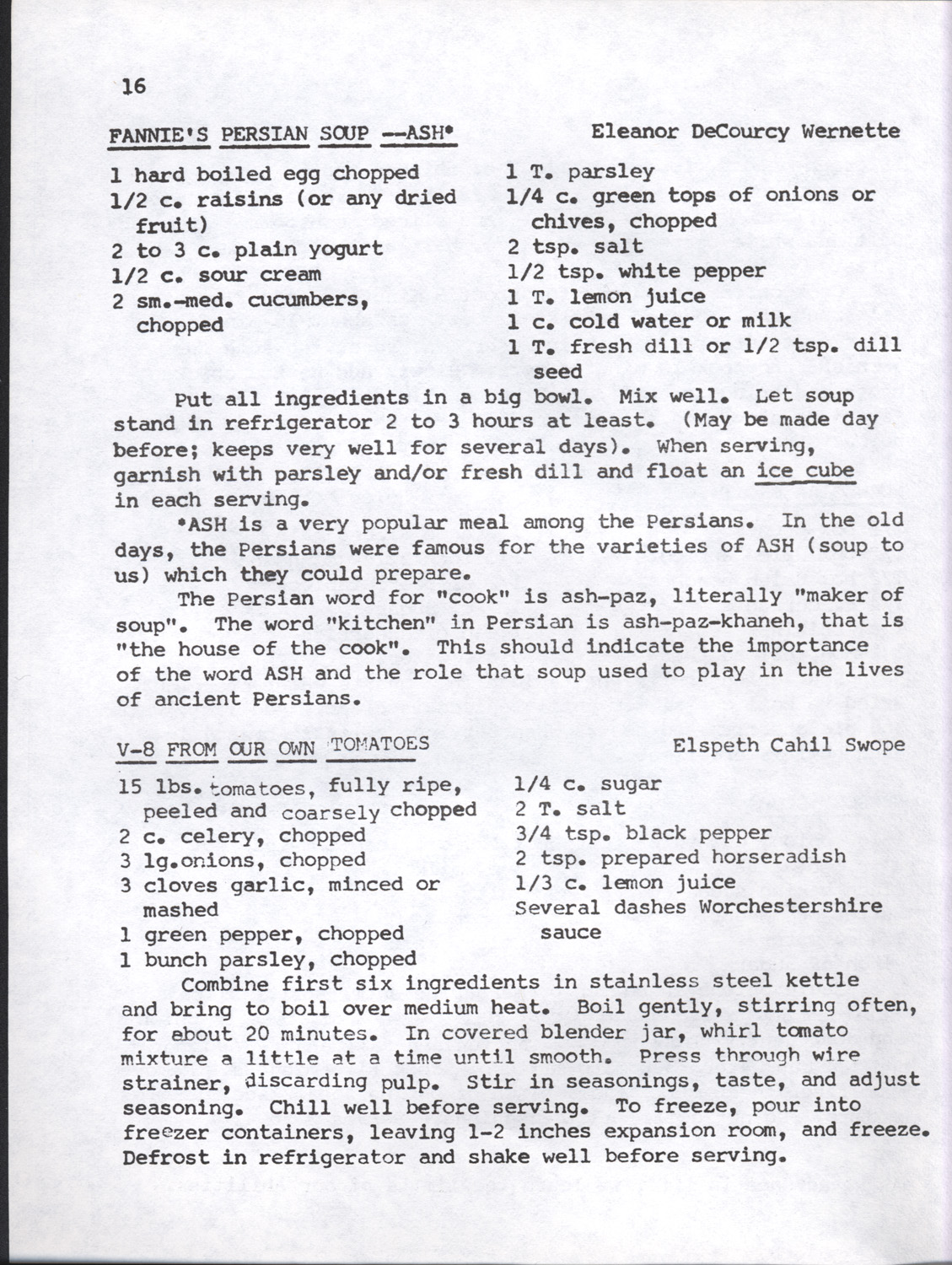 Put all ingredients in a big bowl. Mix well. Let soup stand in refrigerator 2 to 3 hours at least. (May be made day before; keeps very well for several days). When serving, garnish with parsley and/or fresh dill and float an ice cube in each serving.

*ASH is a very popular meal among the Persians. In the old days, the Persians were famous for the varieties of ASH (soup to us) which they could prepare. The Persian word for "cook" is ash-paz, literally "maker of soup". The word "kitchen" in Persian is ash-paz-khaneh, that is "the house of the cook". This should indicate the importance of the word ASH and the role that soup used to play in the lives of ancient Persians.

As we advance in life, we learn the limits of our abilities.

Soak dried fruits and tapioca in 2 quarts water overnight. Bring to boil and simmer until tapioca is clear. Add 1 qt. water and pie cherries and heat. When serving, a little brandy in each bowl is excellent.

Cook onions in butter for about 3 minutes. Add flour, salt, and white pepper to taste. Heat for about 10 minutes, stirring constantly. stir in mushrooms, reserving sane for garnish, and cook 10 minutes more. Slowly add heated chicken broth and bring to boil. Put through blender until smooth. Return to stove and stir in cream. Heat through but do not boil. Garnish each serving with reserved mushroom slices. 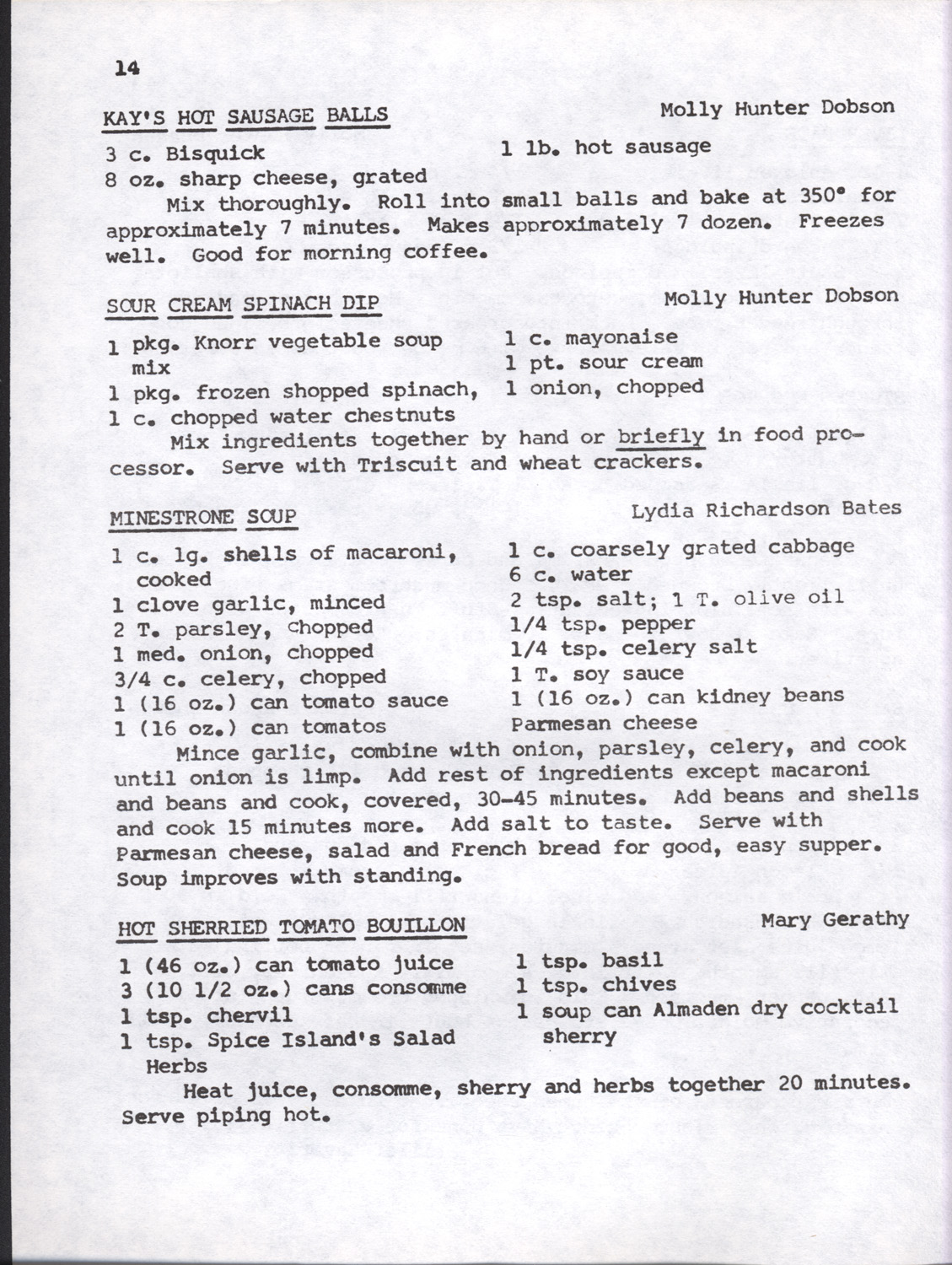