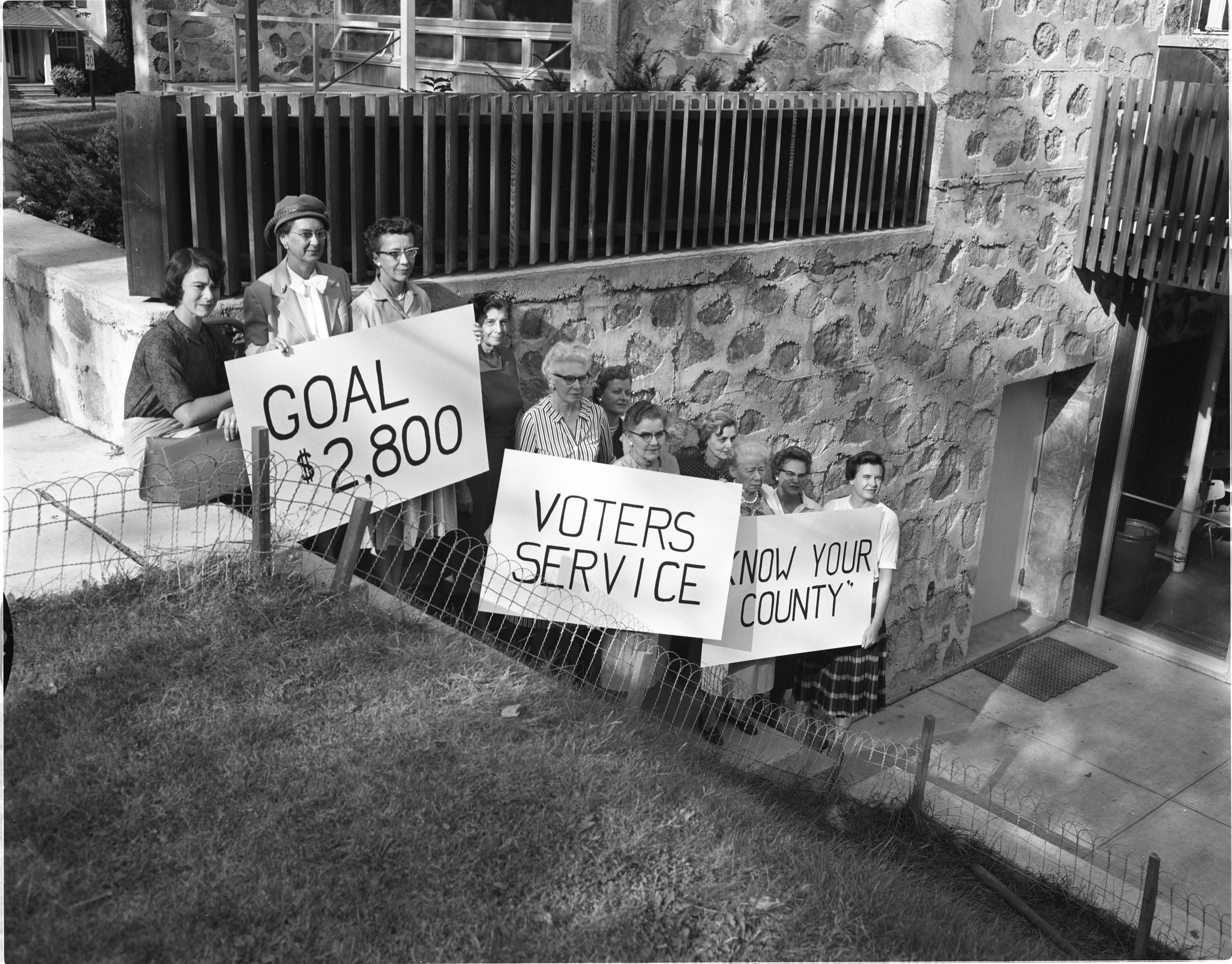 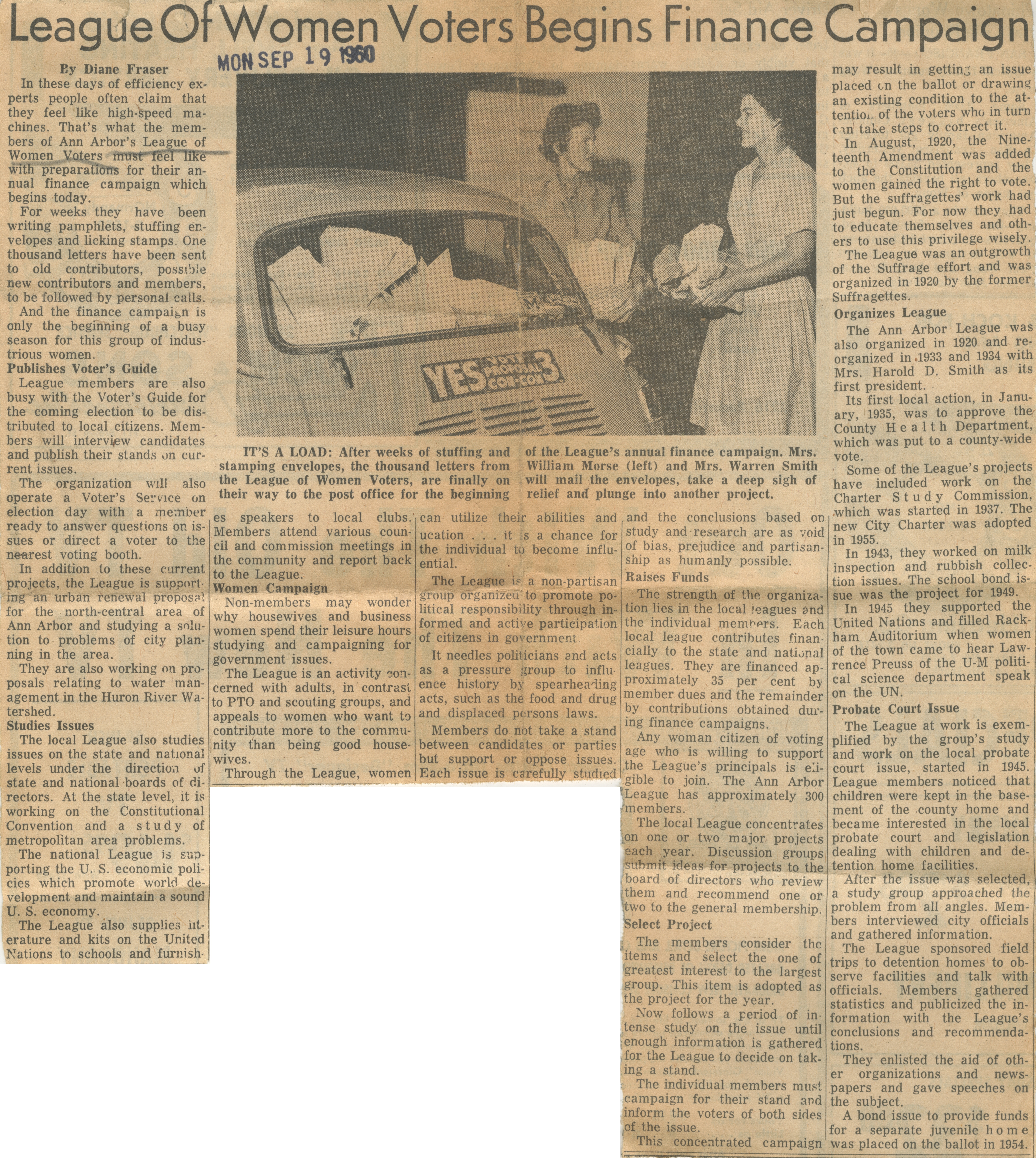 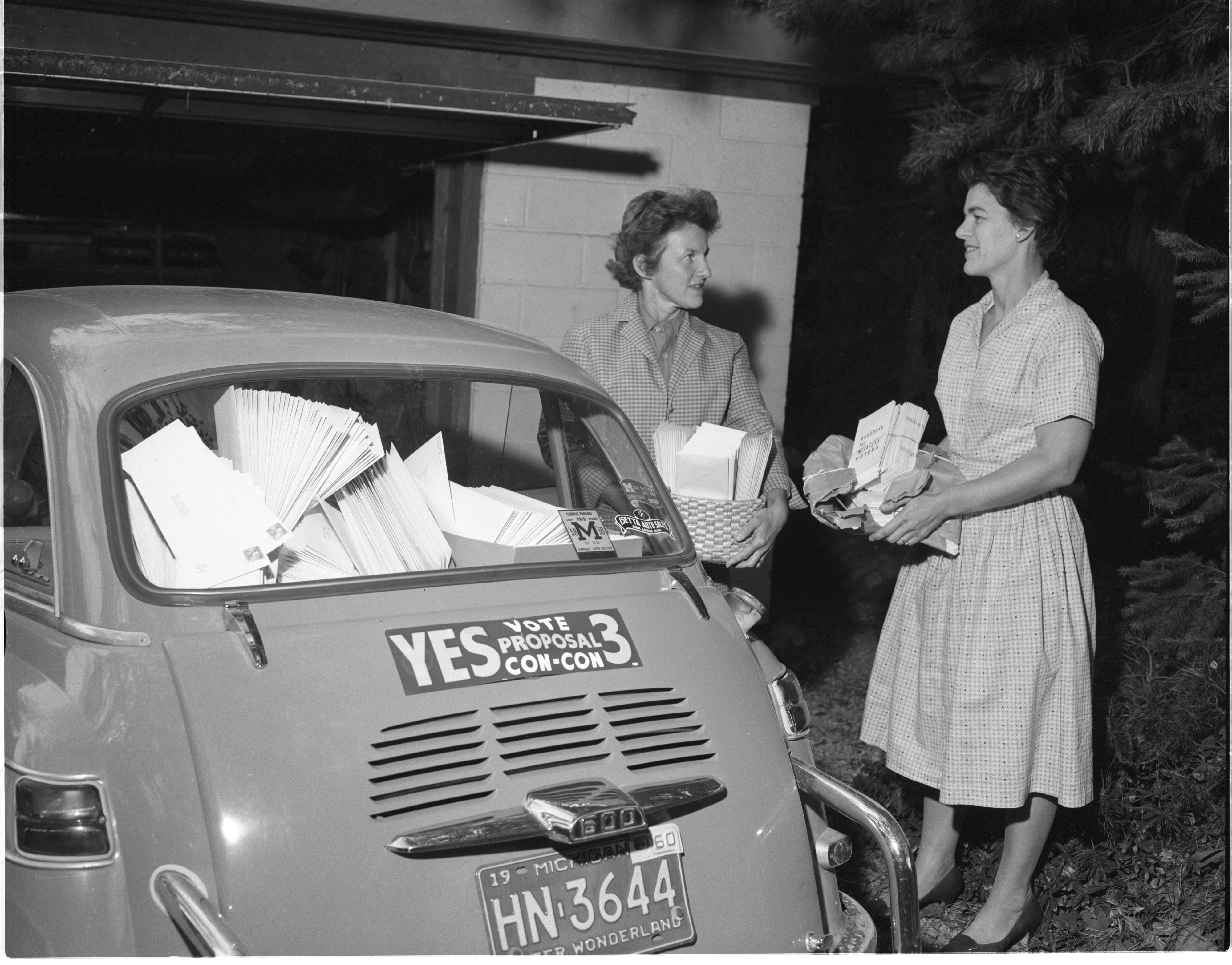 Published In
Ann Arbor News, September 19, 1960
Caption
IT'S A LOAD: After weeks of stuffing and stamping envelopes, the thousand letters from the League of Women Voters, are finally on their way to the post office for the beginning of the League's annual finance campaign. Mrs. William Morse (left) and Mrs. Warren Smith will mail the envelopes, take a deep sigh of relief and plunge into another project.
Copyright
Copyright Protected 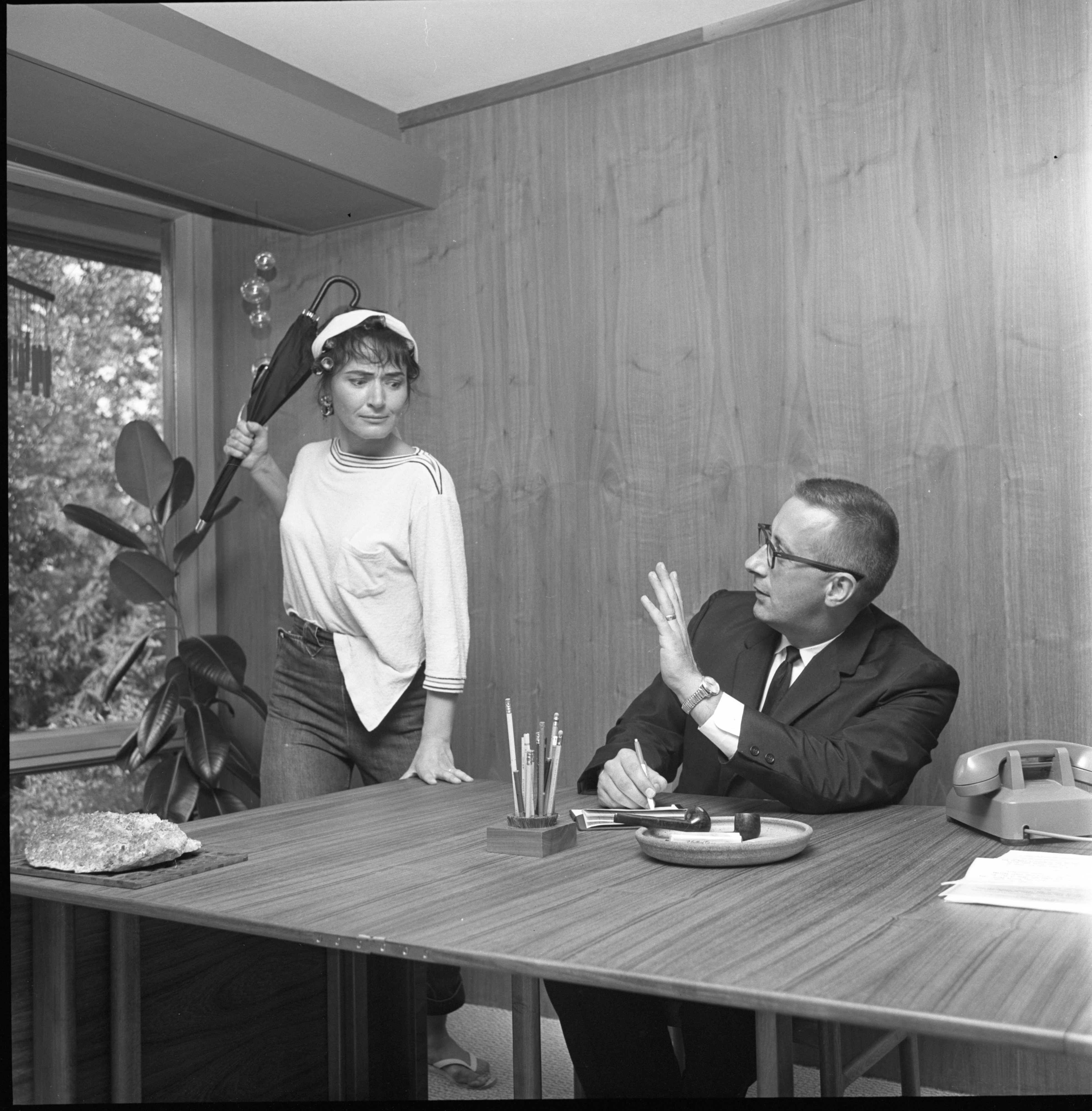 Published In
Ann Arbor News, September 14, 1961
Caption
'FRIENDLY PERSUASION': A member of the League of Women Voters "persuades" a prospective contributor on one of her early morning calls as a solicitor for the League's finance drive, which begins Tuesday. Mrs. Daniel B. Suits and Prof. Richard L. Cutler are shown in a scene from one of the skits on "how-not-to-do-it" soliciting to be presented at the finance drive's kick-off meeting Monday.
Copyright
Copyright Protected

Dr. John F. Shepard Drops A Financial Contribution For The Ann Arbor League Of Women Voters Into A Mailbox, September 1962 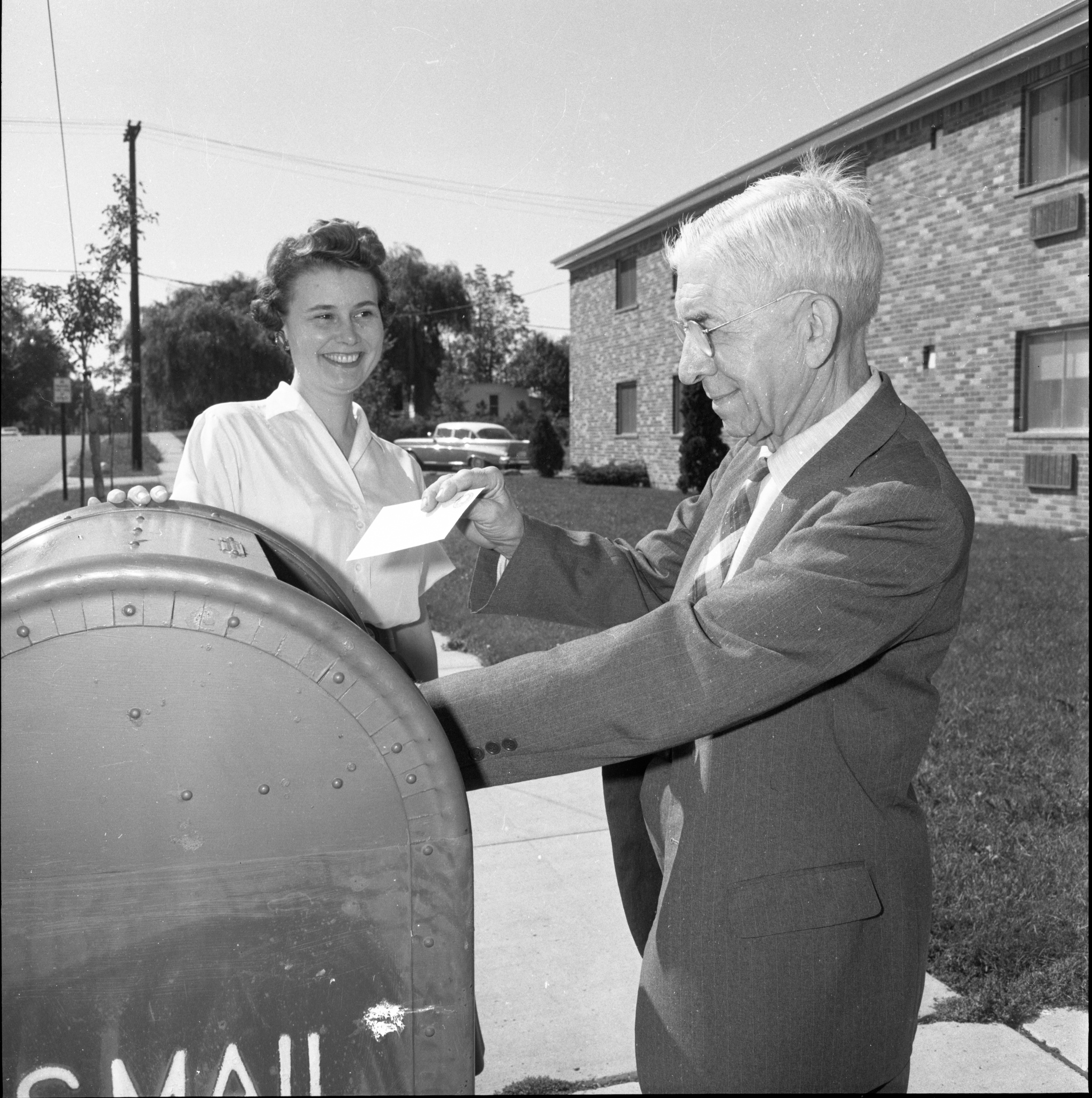 Published In
Ann Arbor News, September 12, 1962
Caption
AVID LEAGUE SUPPORTER: Mrs. Carl Johnson, finance chairman of the Ann Arbor League of Women Voters, smiles with approval as Dr. John F. Shepard of Oakland Ave., professor emeritus of psychology at the U-M, is first in line with his contribution for the League's annual finance drive, which gets under way officially Sept. 17. Supporters of the League's nonpartisan work in national, state and local government are being asked to donate $3,500 this year.
Copyright
Copyright Protected 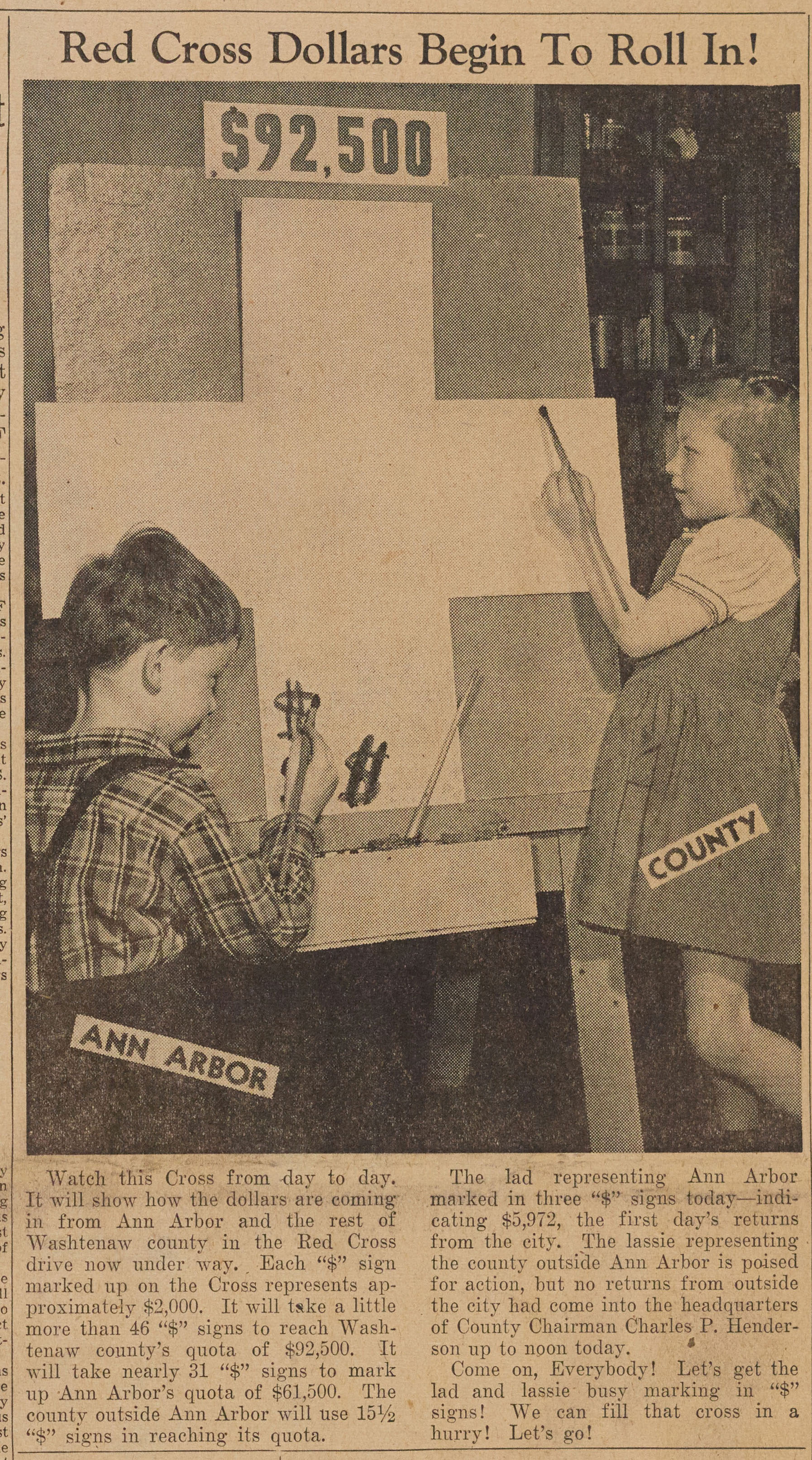 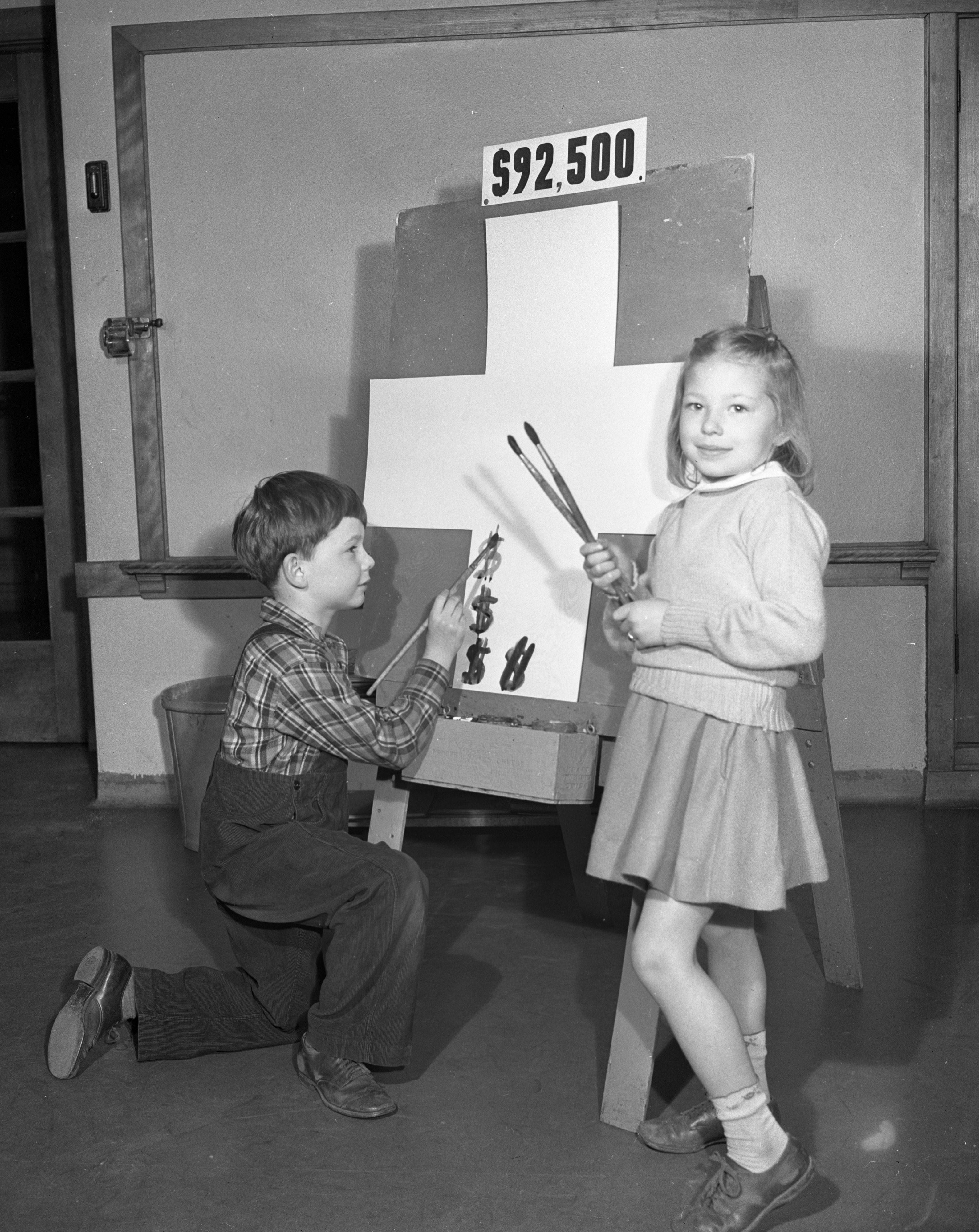 Published In
Ann Arbor News, March 3, 1944
Caption
Ann Arbor is asked to give $61,500 to the Red Cross fund in the drive now on; Washtenaw county outside the city is asked to give $31,000--a county total of $92,500. Unofficial reports form the army of solicitors that went into action on Wednesday are that the people approached are giving eagerly and generously. They want to have a real share in the great work of the Red Cross. They want to feel that they are active parts of the Red Cross. But while unofficial reports show that the drive is "going strong," official reports are slow in coming in. Perhaps that's because the solicitors have been so busy gathering in contributions they haven't taken time to send them to headquarters. When these official reports really begin to come in, watch the "$" sign on the Cross begin to multiply. Each "$" sign on the Cross stand for $2,000 turned into headquarters. Thus far Ann ARbor is officially credited with $7,092, so the lad representing the city chalks up a fourth "$" sign. He still has27 to go to reach Ann Arbor's quota of $61,500. The lassie is still waiting anxiously for official returns from Ypsilanti, Milan, Dexter, Saline, Chelsea, Whitmore Lake, Manchester, Bridgewater, and the rural districts of the county. She's alert to mark them down quickly when they come. Washtenaw county is going to fill that Cross with "$" signs. Watch 'em grow!
Copyright
Copyright Protected
Subscribe to Fundraising