Students From The English Language Institute Ready To Board Bus For A Trip To The U.P. , November 1, 1963 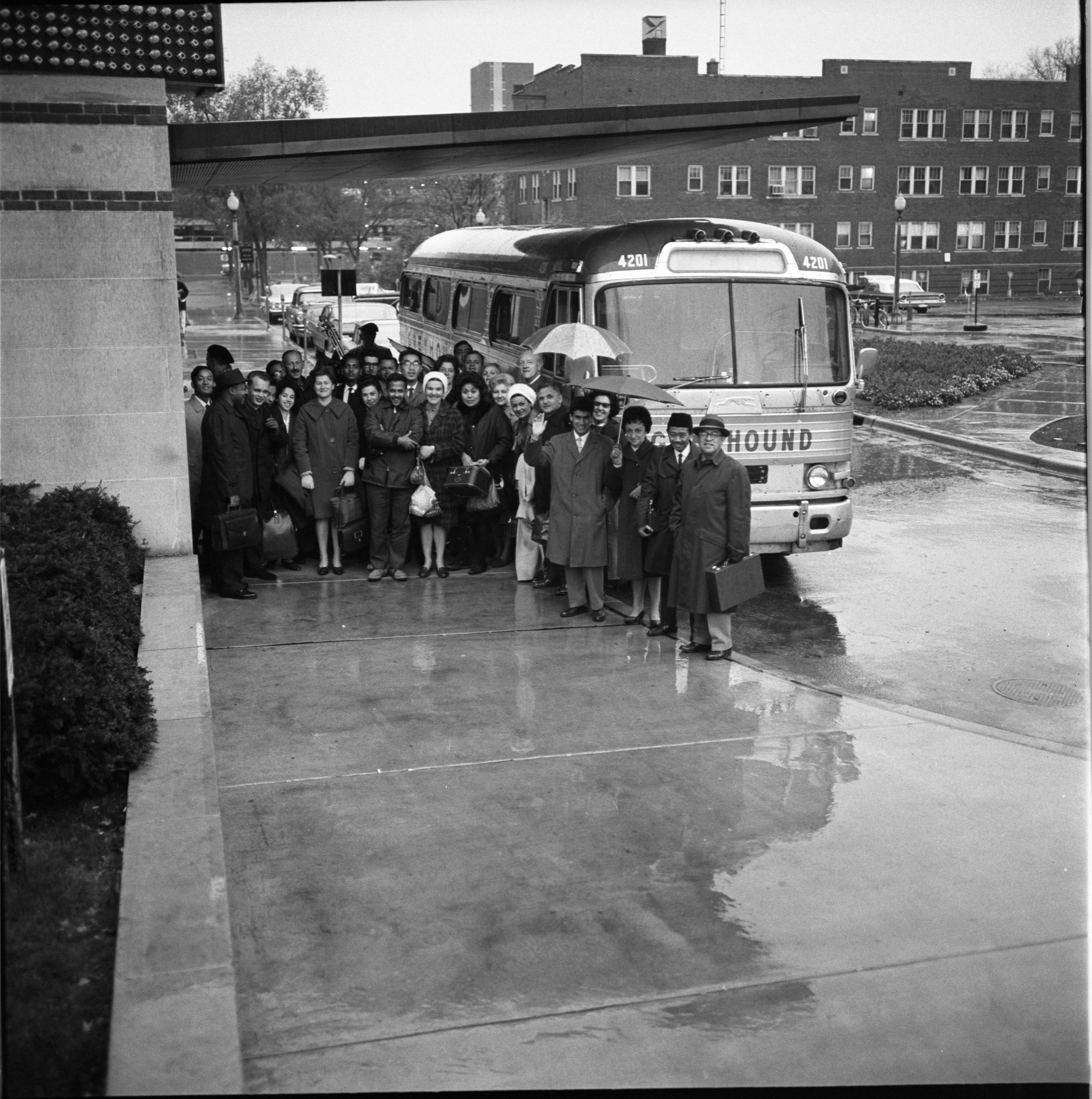 Published In
Ann Arbor News, November 1, 1963
Caption
Leave for North: Some of the 36 teachers from 17 foreign nations who are in training at the University's English Language Institute are boarding a bus in yesterday's rain at the Michigan Union for a trip to Michigan's Upper Peninsula and Chicago. The teachers were entertained last night by the U-M Alumni Club at Sault Ste. Marie, and tonight will be guests of the Alumni Club of Menominee. The group will then travel through Wisconsin to Chicago, returning home Monday.
Copyright
Copyright Protected 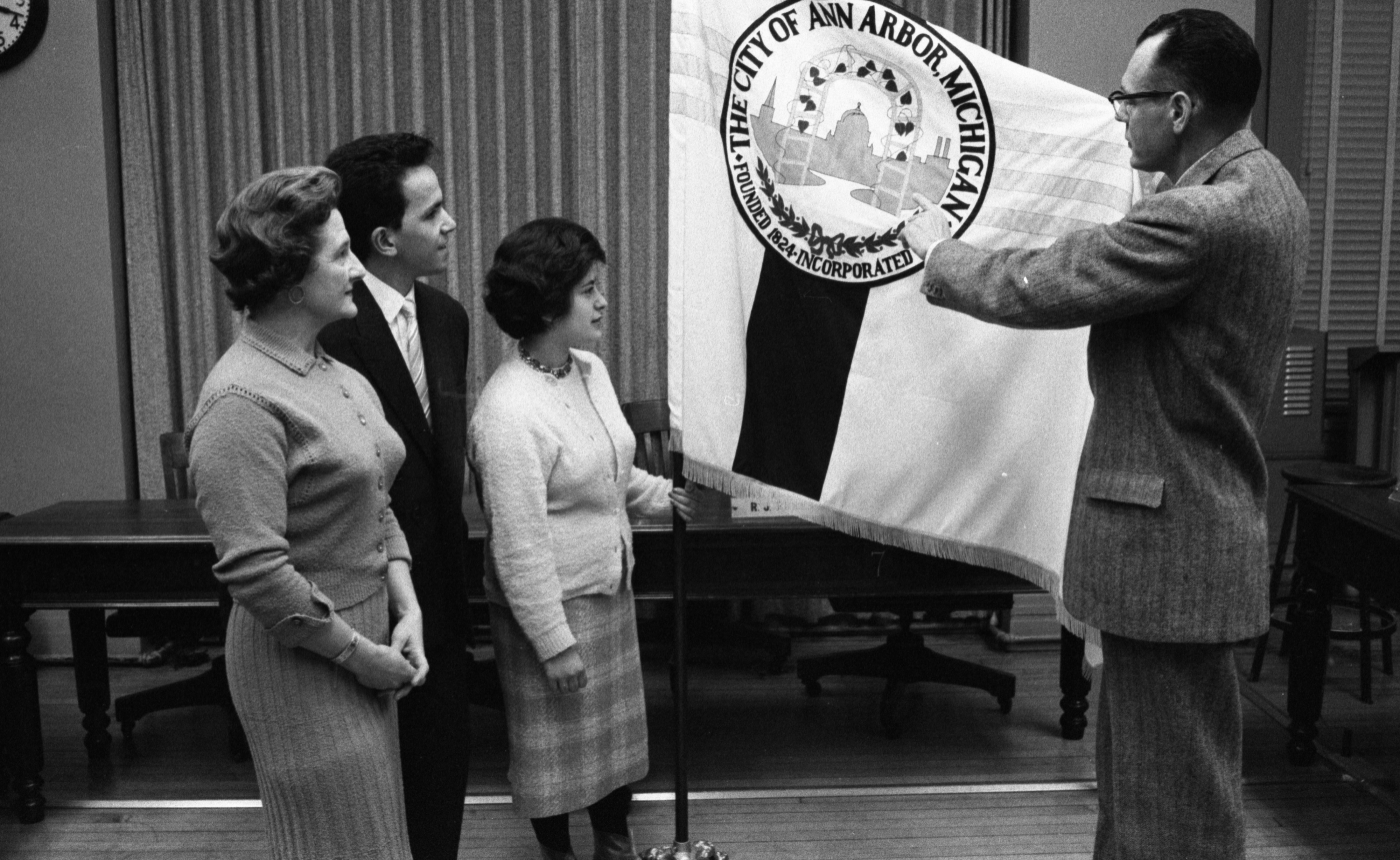 Published In
Ann Arbor News, March 1, 1960
Caption
Foreign Students' Night Out: Nineteen foreign students of the University English Institute learned about city government last evening in a visit to the City Council meeting. Arrangements were made by Mrs. William B. Ballis (left), government and politics chairman of the Friends of the English Language Institute, and her committee. Mayor Pro-Tem Russell J. Burns (right) showed the city seal to students (center) Hussein Abouhossein of Iran and Miss Selam Kawas of Syria. Mrs. Florence R. Crane, council woman and Friends member gave a talk before the meeting. The foreign students adjourned to the home of Mrs. J. R. Hayden of Hill St. and heard another talk on municipal government by William R. Gable, research associate of the U-M Institute of Public Administration. Friends of the ELI provided transportation for the students.
Copyright
Copyright Protected 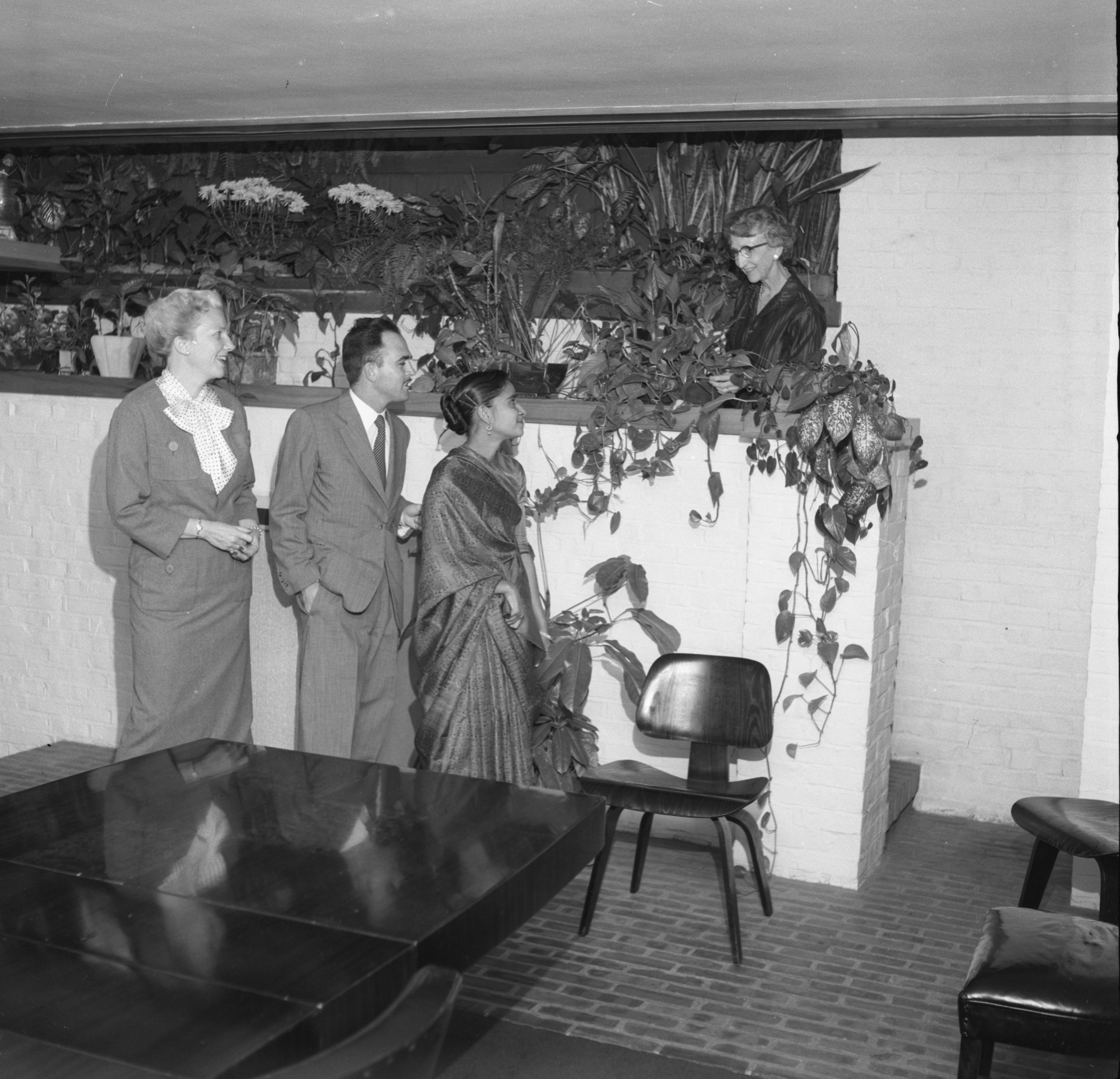 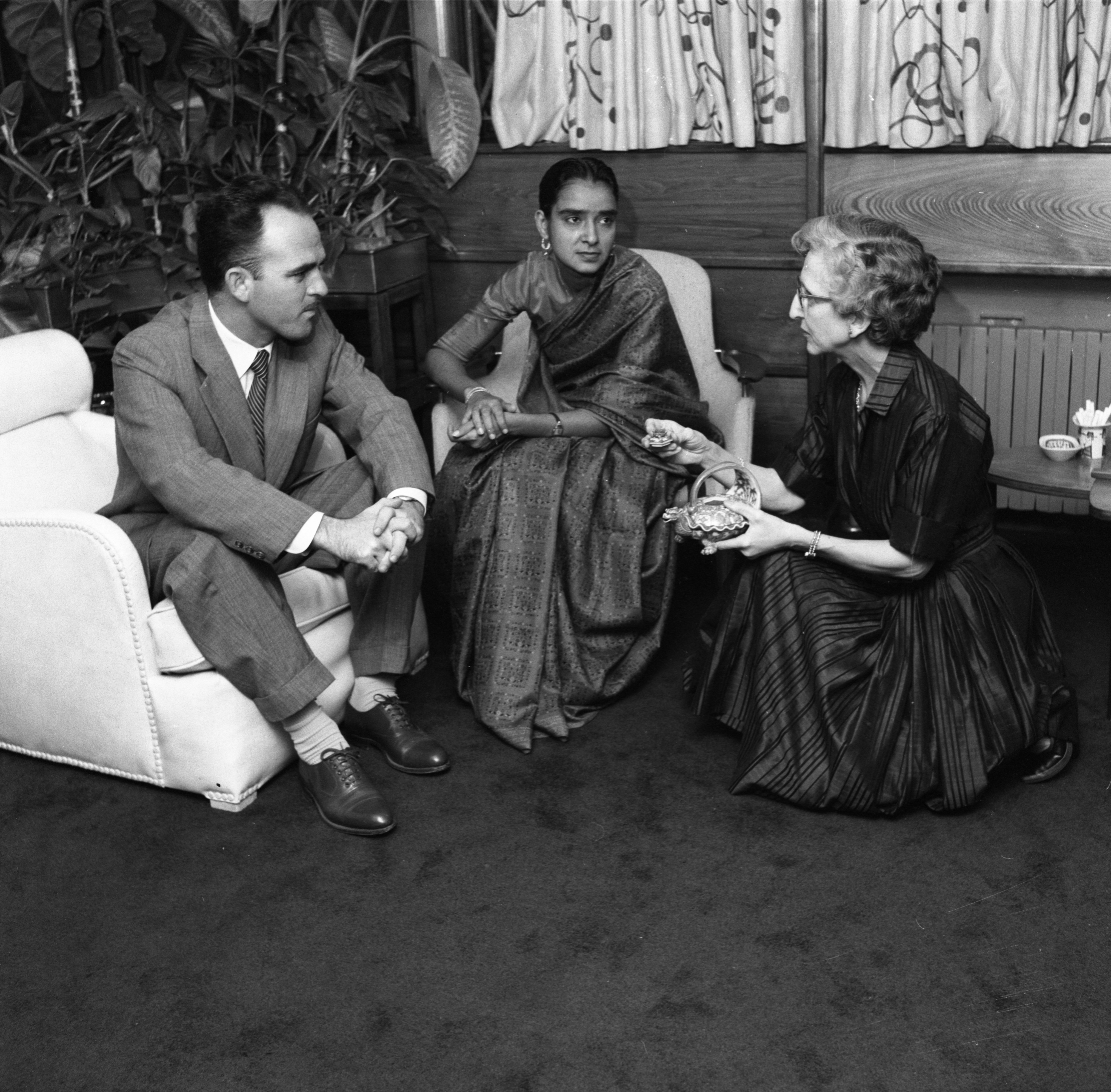 Published In
Ann Arbor News, September 30, 1959
Caption
Visit Ann Arbor Home: Mario Mascherpe (left) of San Paolo, Brazil, and Miss P. S. Dua (center) of Agra, India, recently visited one of the Friends of the English Language Institute sponsors, Mrs. Harry A. Towsley of Birkshire Rd. Among items of interest they saw in her home was Mrs. Towsley's teapot collection. The teapot she holds is shaped like a turtle. Of particular interest to Miss Dua was the Towsley kitchen.
Copyright
Copyright Protected 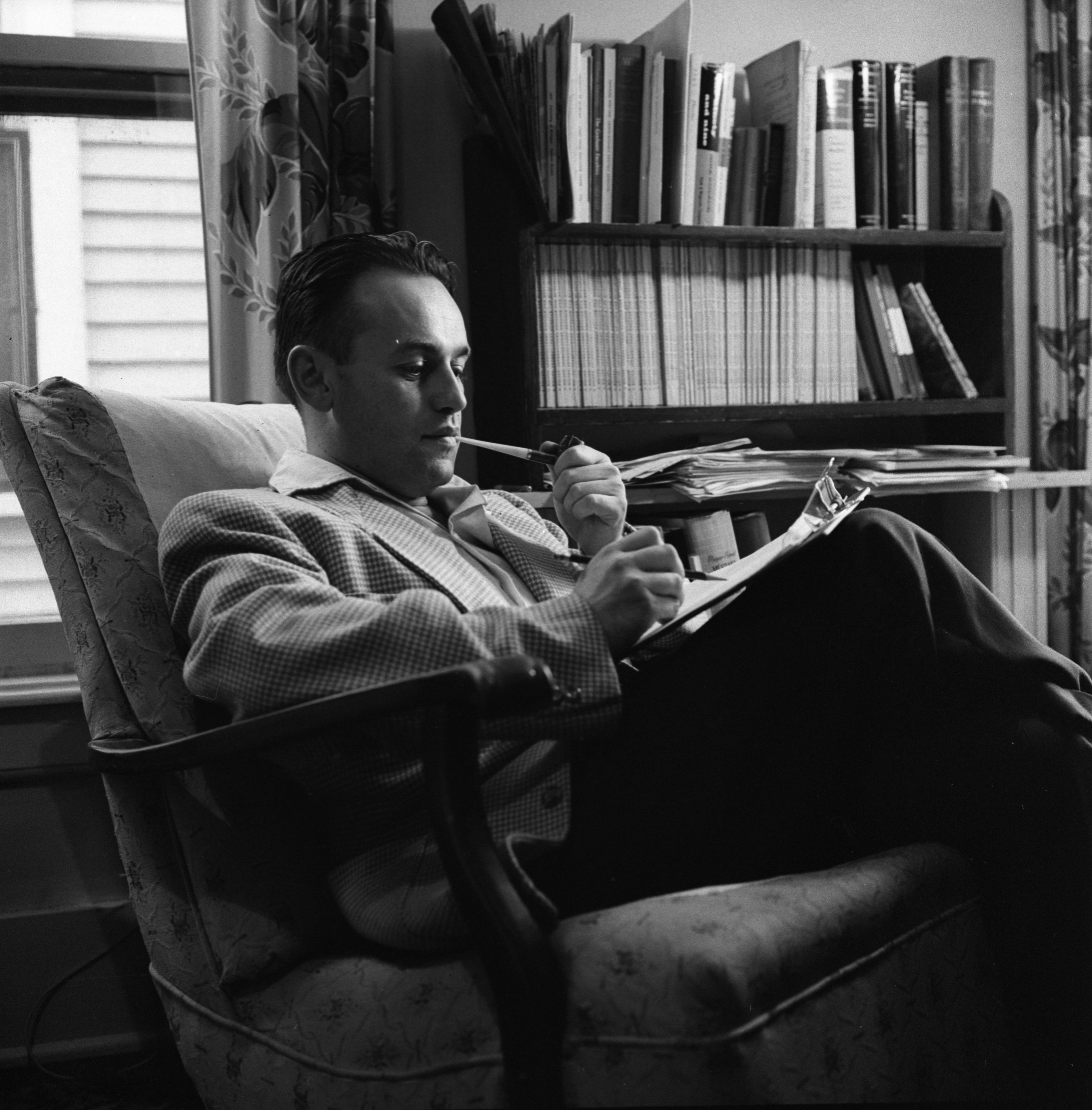 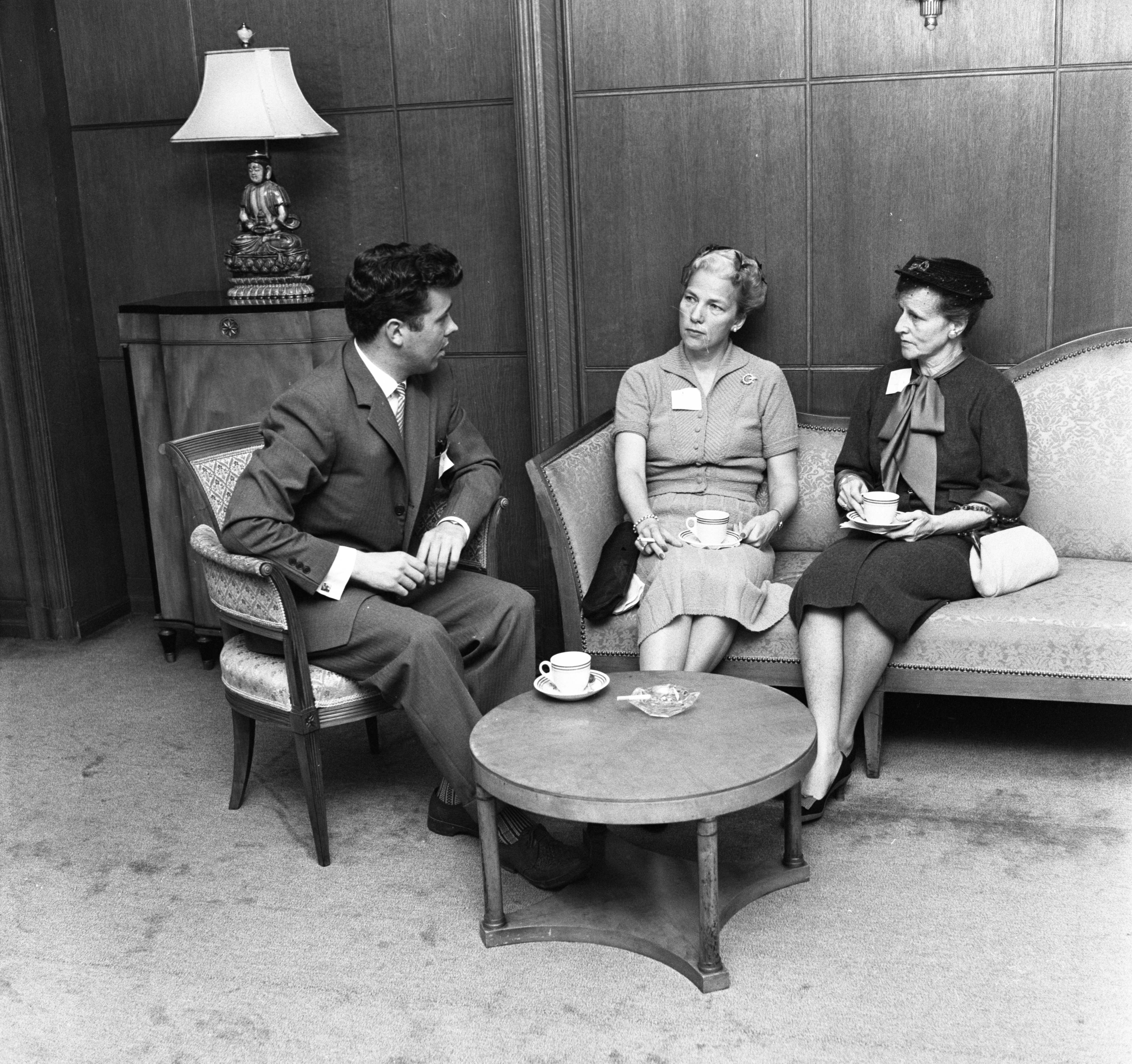 UM Teachers Of English Learn How To Make Tape Recordings For WUOM, October 29, 1953 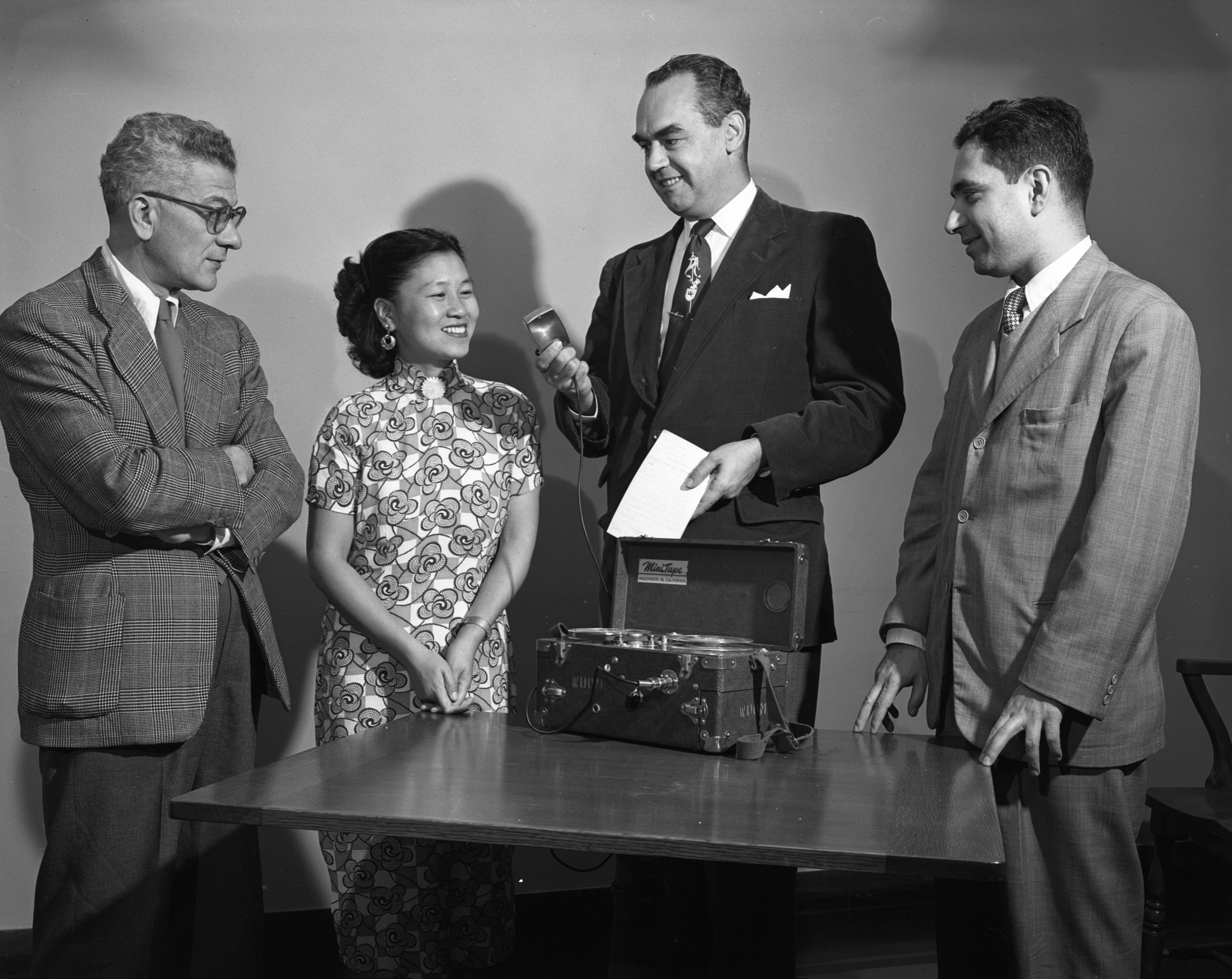 Published In
Ann Arbor News, October 29, 1953
Caption
Three foreign teachers of English are given instructions for making a tape recording for University radio station WUOM. The three teachers who are studying at the English Language Institute on campus, made a recording yesterday at the institute office for broadcast over Michigan radio stations. William Bender, Jr., of WUOM, holds the microphone up for Mrs. Mei-Soo Chu Lin of Taina, Formosa. Watching are Elias Eliascos of South Quadrangle, from Athens, Greece, at left, and Fernando Carneiro daSilva of White St., from Sao Paulo, Brazil, at right. The two men will be among a dozen foreign teachers to appear in a roundtable discussion tonight at the Rackham Building. The discussion will be sponsored by Pi Lambda Theta and Phi Delta Kappa, honorary education fraternities, at 8 p.m. in the assembly room.
Copyright
Copyright Protected 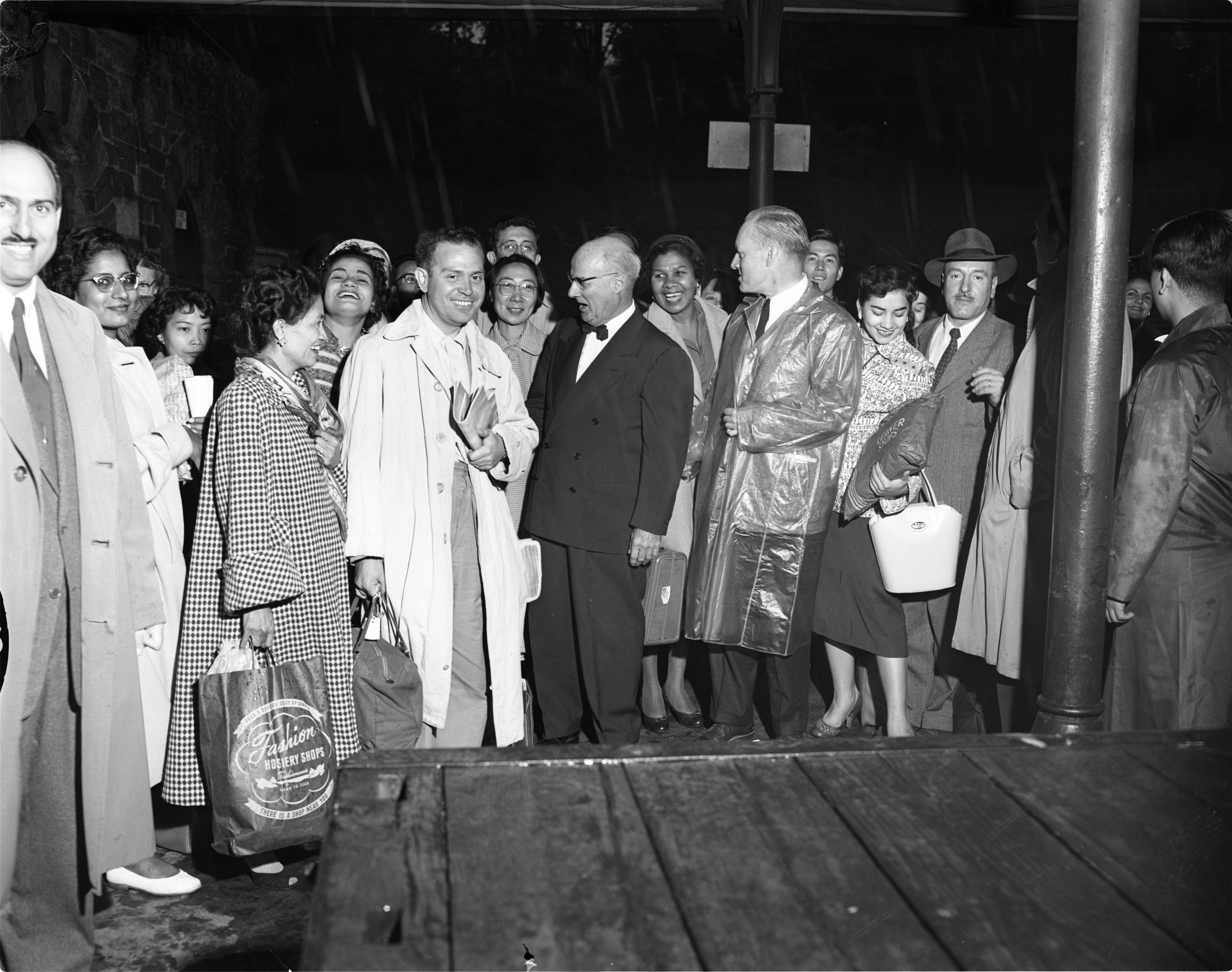 Published In
Ann Arbor News, September 23, 1955
Caption
The skies were dripping but the smiles were bright as 40 teachers of English from 16 foreign countries arrived in Ann Arbor by train this morning for 12 weeks of special study of teaching techniques at the University. Among the U-M delegation on hand to greet them were Dr. Charles C. Fries (dark suit), director of the English Language Institute, and Dr. John F. Weir (raincoat), lecturer in the Institute. U-M officials reported they were having some difficulty finding places for the visitors to live in housing-short Ann Arbor and asked anyone able to help to call the English Language Insitute.
Copyright
Copyright Protected 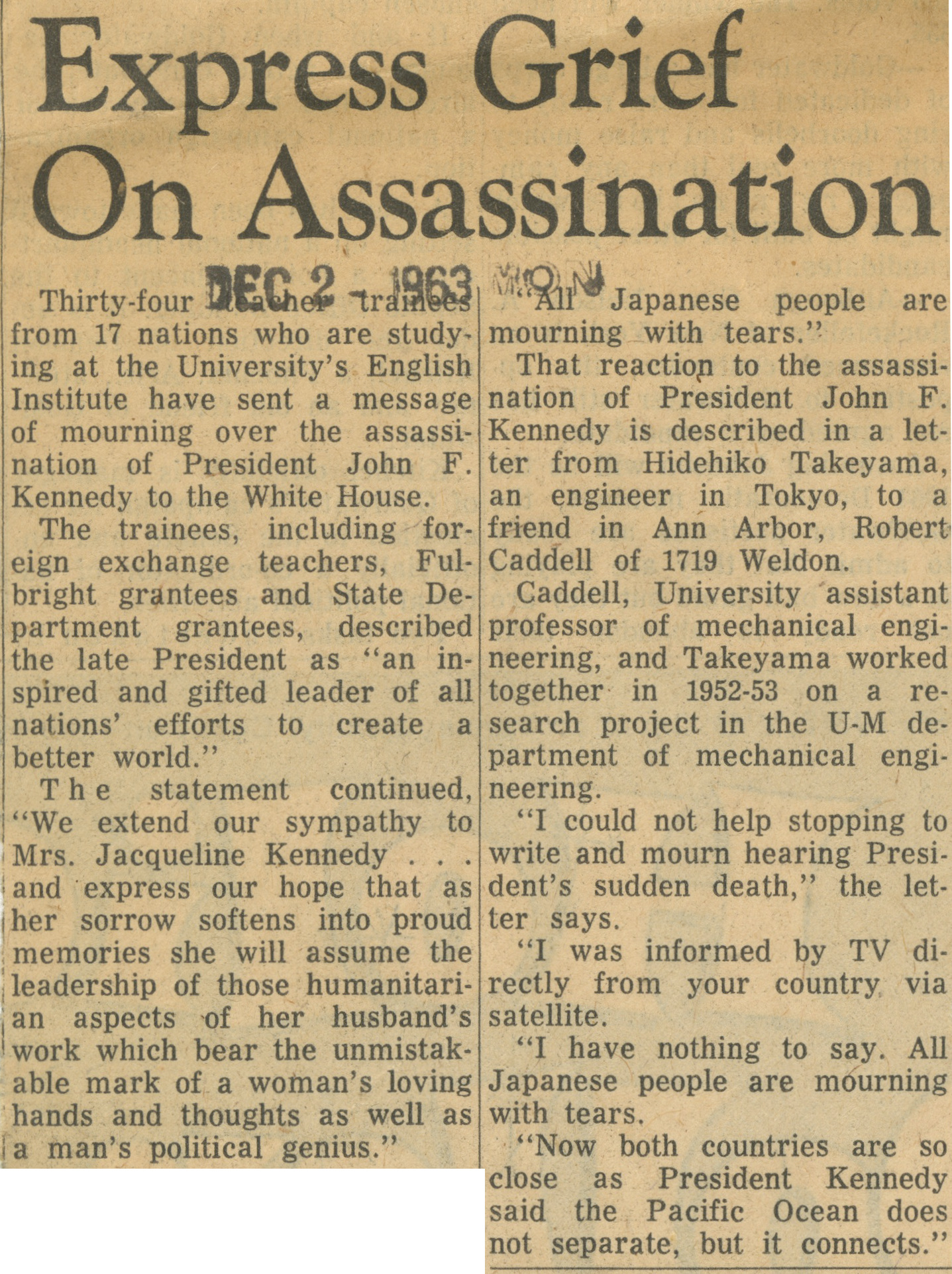 Some Foreign Students Get Union Rooms 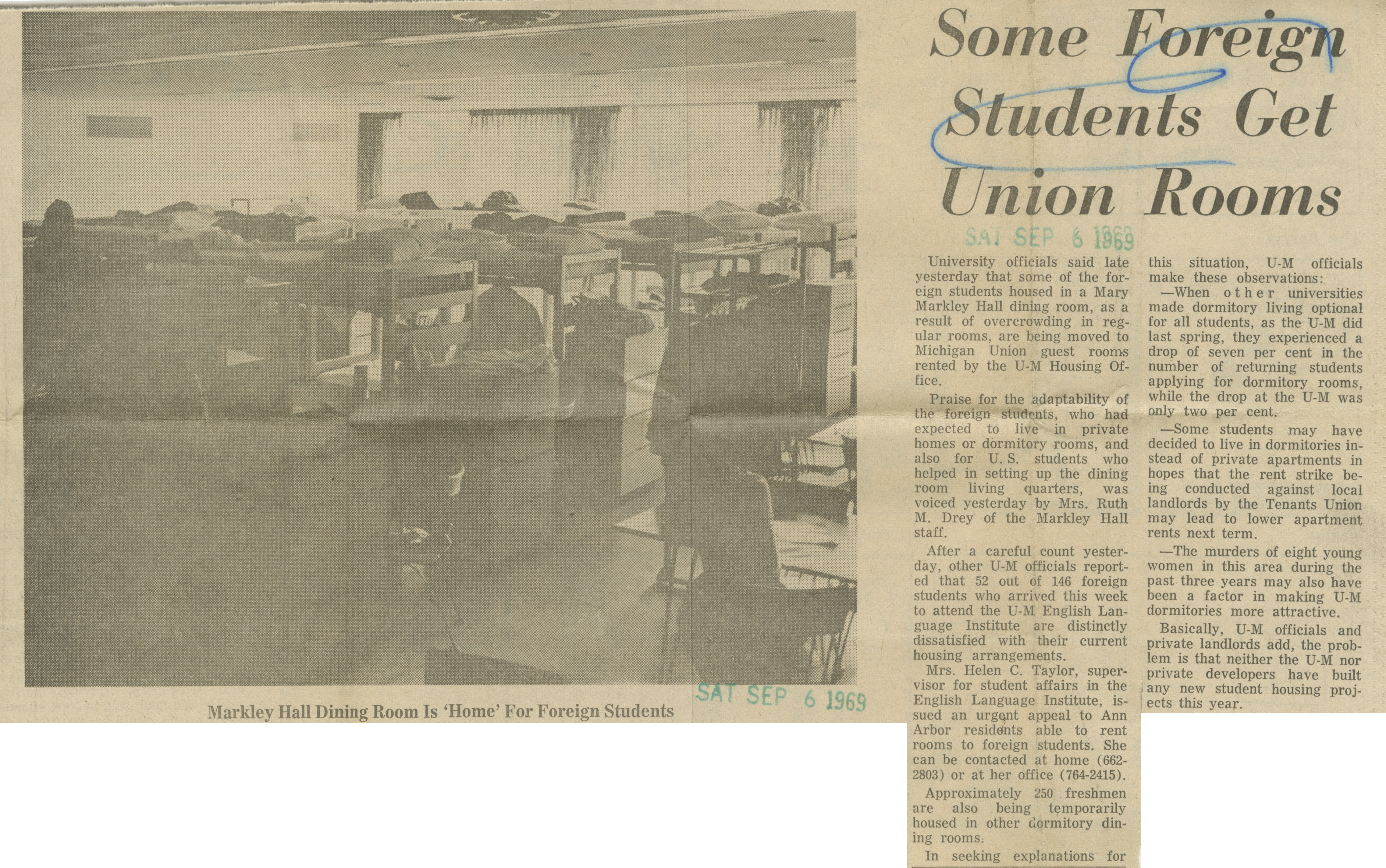