In this episode AADL Talks To Tom and Cindy Hollander, owners of Hollander’s. The specialty paper business formerly resided in Kerrytown from 1991-2020. The business began in Ann Arbor in 1986, when the Hollanders started by running the business out of their home. After many renovations and expansions, the store eventually became a 14,000 square foot site and must-see destination in Kerrytown’s historic Godfrey Building. 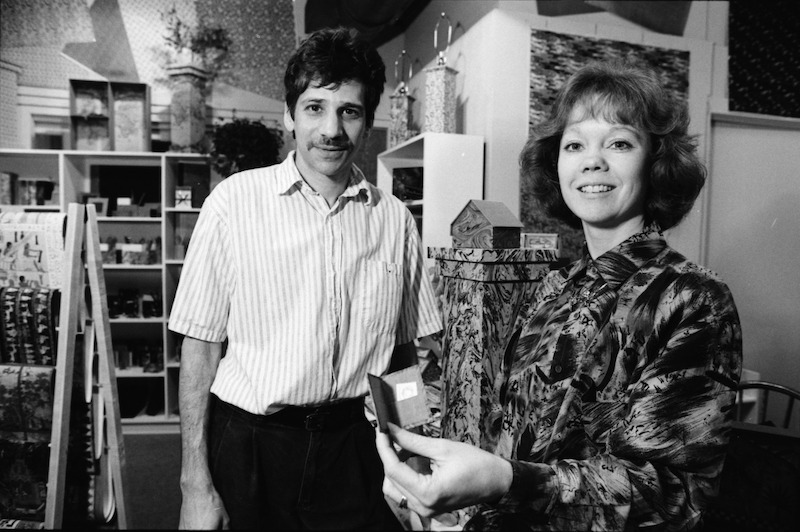 Tom and Cindy Hollander at Hollander's in Kerrytown, April 1992

Behind The Marquee: Episode 47 - A Virtual Year

Nick is joined by Sarah, Jared, and Ben for a discussion about the last year in programming, how the Virtual Cinema will continue as cinemas reopen, what they're looking forward to this Summer, and as always, they conclude with their Movie Magic Moments of the week.

Behind The Marquee: Episode 46 - A Virtual Conversation with Ann Arbor Chefs

Inspired by the virtual release of 'Her Name is Chef', Sarah Escalante, Director of Programming & Communications, has a virtual conversation and Q&A with local chefs: Abby Olitzky from Spencer, Allie Lyttle from Lala's, Ji Hye Kim from Miss Kim, and Eve Aronoff from Frita Batidos.

The Pere Marquette Railroad has not one but two histories—one for the twentieth century and one for the nineteenth. While the twentieth-century record of the Pere Marquette Railroad has been well studied and preserved, the nineteenth century has not been so well served. Pere Marquette: A Michigan Railroad System Before 1900 is the latest book by railroad aficionado Graydon M. Meints which aims to correct that oversight by focusing on the nineteenth-century part of the company’s past, including the men who formed and directed these early roads, and the development of the system.

The Pere Marquette Railroad was formed in 1900 by a merger of three Michigan railroad companies and lasted forty-seven years, disappearing in June 1947 by merger into the maw of the Chesapeake & Ohio Railroad. Prior to the 1900 merger, the Pere Marquette Railroad’s predecessors made up a motley collection of disconnected and unaffiliated short, local rail lines. After the financial panic of 1893, and with some commonality of ownership, the companies worked together more closely. Before the end of the decade, the three main railroads—the Flint & Pere Marquette; the Detroit, Lansing & Northern; and the Chicago & West Michigan—had decided that the only way to maintain solvency was to merge.

Using a plethora of primary sources including railway timetables and maps, this work lends insight into the little-known corporate business history of the Pere Marquette Railroad.

Herb David was an Ann Arbor luthier.  Originally a research psychologist, David was taught how to make and repair stringed instruments by his mentor, Sarkis "Sam" Varjebedian.  At the age of 30, David started Herb David Guitar Studio, a shop where he produced, repaired, and sold guitars, dulcimers, harps, banjos, and many other types of stringed instruments.  He passed away on July 25, 2020.

Herb David was interviewed by students from Skyline High School in Ann Arbor in 2016 as part of the Legacies Project.

Benita Kaimowitz was born in 1935 and grew up in Pascagoula, Mississippi, where her father ran a general store. When she was 11, her family moved to Nashville, Tennessee. After graduating from college at the University of Hawaii, she got her master’s at Sarah Lawrence College. Kaimowitz helped register voters in Louisiana as a volunteer for the Congress of Racial Equality (CORE). She was a teacher and a longtime employee of Borders Bookstore in Ann Arbor. She and her first husband Gabe lived in a collective house for over two decades.

Benita Kaimowitz was interviewed by students from Skyline High School in Ann Arbor as part of the Legacies Project.

When you hear the word startup, what do you think about? Do you think tech? Retail? Duo Security? Regardless of what you envision, we know one thing for sure: startups are what drive economic growth and development. This talk goes over what Michigan needs to continue growth as a startup ecosystem.

About Leann – Director of Content, Argonomo; Founder, ASHE Media; Host of the Impact Michigan and Generation [I] podcasts. Passionate about entrepreneurship, digital media, and building the Michigan startup ecosystem. Follow him @leann_abad.