The 1893 Cyclone - A Terrible Night of Desolation in Ypsilanti 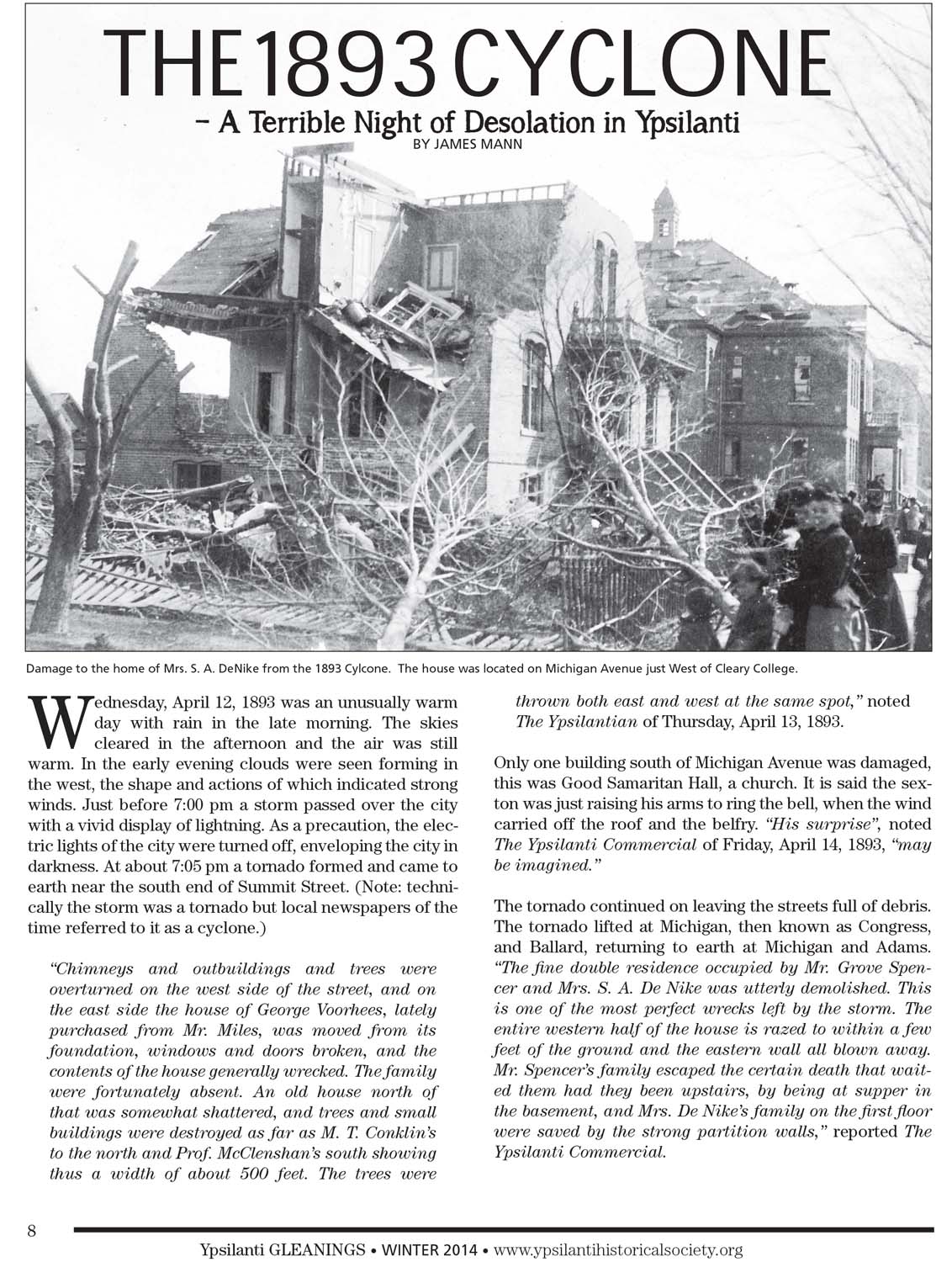 Once a thriving industrial town, it never recovered from the tornado of 1917

On summer weekends, many Ann Arborites escape to Delhi Metro-park, five miles west of town on the Huron River. Picnicking on the riverbank or jumping from rock to rock in the river, few realize that the rapids that make the park so impressive contain the foundation stones of five nineteenth-century mills, or that the small settlement nestled southwest of the park was once a thriving village.

When Michigan was settled, water was the main source of energy, so most early towns were founded on rivers. Delhi, where the Huron River drops steeply as it rounds a bend, was a particularly good place for mills. At its peak in the 1860s and 1870s, Delhi was a small industrial village, with two grist mills, a woolen mill, a sawmill, and a plaster mill; its own post office (called Delhi Mills); and a railroad station with four scheduled train stops per day.

The first to see the possibilities of the location was Jacob Doremus, a shoemaker who emigrated from New York state in 1831. He bought a tract of land along the river, built a small sawmill, and started clearing the land and selling rough-cut lumber to local farmers. In 1836, he platted a town, which he called Michigan Village, and began selling lots. He built a primitive dam with timber, stone, and earth. A local resident, Isaac Place, built a millrace on the north side of the river to channel the water.

Delhi, looking north, in 1874 when it was still a thriving mill town, with homes and mills lining both sides of the Huron. It was all downhill from there: the first mill closed the same year.

Taking advantage of the increased water power, Doremus replaced his original sawmill with a better one at the end of the Place race and then built two additional mills, also on the north side of the river--the Ithaca Flour Mill and a four-story brick woolen mill that he named the Doremus Carding and Clothing Works.

Doremus was one of the founders in 1833 of the Webster Church (still extant, it is the oldest continuously used church in Michigan) and an organizer of the local school. In 1846, he tried to change the name of the town to Doremusville, a move that Delhi historian Nick Marsh theorizes may have been to honor his wife, Esther, who died that year. But the other residents objected and decided to rename it Delhi after the dells and hills in the area.

Doremus died the next year, and the mantle of town leader was passed to his younger partner, Norman Goodale. Goodale built a new flour mill on the south side of the river, which he called simply the Delhi Mill. (A millrace, called the Church race, had already been built on that side of the river for a short-lived scythe factory.) The new mill, four stories high, with an unusual indoor water wheel, could be seen for miles around.

With Goodale's death in 1869, ownership passed to his nineteen-year-old son, Frank, and his partner, John Henley. Frank was the senior partner since he owned more of the stock, but Henley, who knew more about the business, continued to run the mills.

By then, however, the rise of steam power was freeing industry from its dependence on flowing water. Small mills like Delhi's were already facing competition from large urban factories that bought and sold on a national scale. The woolen mill was the first to go: it closed in 1874, done in by competition from larger clothing mills in the East that were being supplied by larger sheep herds in the West. After Henley died in 1881, the other mills' profits also began to go down drastically, due to a combination of hard economic times and Frank Goodale's inexperience. In 1889, Goodale and his mother lost ownership of the remaining mills.

Delhi after the 1917 tornado, looking south.

In 1900 the Delhi mills merged with the Michigan Milling Company, which razed and sold for scrap the Ithaca Flour Mill, the sawmill, and the plaster mill. In 1903, the company closed the last operating mill, the Delhi Mill, and dismantled it in 1906.

Delhi had lived on water power, and it withered as water power became unnecessary. In 1903 the post office closed, replaced by Rural Free Delivery out of Ann Arbor, and the railroad station was torn down and replaced by a shed, where the occasional passenger flagged down passing trains.

Much of what remained of industrial Delhi was devastated by a tornado on June 7, 1917. The storm, the worst in half a century, destroyed the school, the wrought iron bridge, what was left of the Delhi Mill and the woolen mill, and many houses. Future Ann Arbor parks superintendent Eli Gallup, then a young graduate of U-M's forestry school, was living in a rented house in Delhi when the tornado hit. The house was demolished and his Ford was thrown to the other side of the road.

Luckily, no one was fatally hurt in the storm, but with little reason to rebuild, many of the remaining residents moved away. The town continued to be home for a handful of families who lived in the remaining houses on two streets, one parallel to the river and the other perpendicular, running straight from the bridge. Many of the residents were tradesmen who worked elsewhere--carpenters, railroad workers, American Broach employees. "We enjoyed living there," says Richard Darr, who grew up in Delhi in the 1930s. "Nobody was wealthy, but we knew everyone and took care of each other." His brother Bob remembers, "In the spring we would take off our shoes and leave them off all summer."

The tornado demolished the house that Eli Gallup was renting and threw his Model T across the road.

In the suburban migration after World War II, Delhi began to grow again, with small ranch houses built mainly along Railroad Street and a few spurs. The long-timers called the new homes "the subdivision." Today a second building boom is occurring, this time with much larger and more expensive houses, filling in the area to the west up to the river.

In 1957, the fifty-acre Delhi Metropark opened, east of the bridge in what had been a cornfield. The park is part of the Huron-Clinton Metropolitan Authority, which was organized after World War II to save some southeast Michigan land for parks before it was all filled by development. A third Darr brother, Arnold, remembers that when the park opened it consisted of just a few roads and some benches by the river. There are now picnic tables, playground equipment, a shelter, fishing sites, and canoe launching and rental.

Today Delhi has forty-nine houses and an estimated population of 123. The Goodale house burned down, but the Henley house is still there, albeit with a different roof. The schoolhouse still stands, although it hasn't been used as such since Delhi consolidated its schools with Dexter's in the 1960s. Crossing the wrought iron bridge (built about 1889 and replaced after the tornado, using some of the old parts) one can easily make out the two millraces. Also still discernible are faint traces of a mill on either side of the river, plus some stones from the dam--the last testaments of the mills that ceased operating almost 100 years ago. 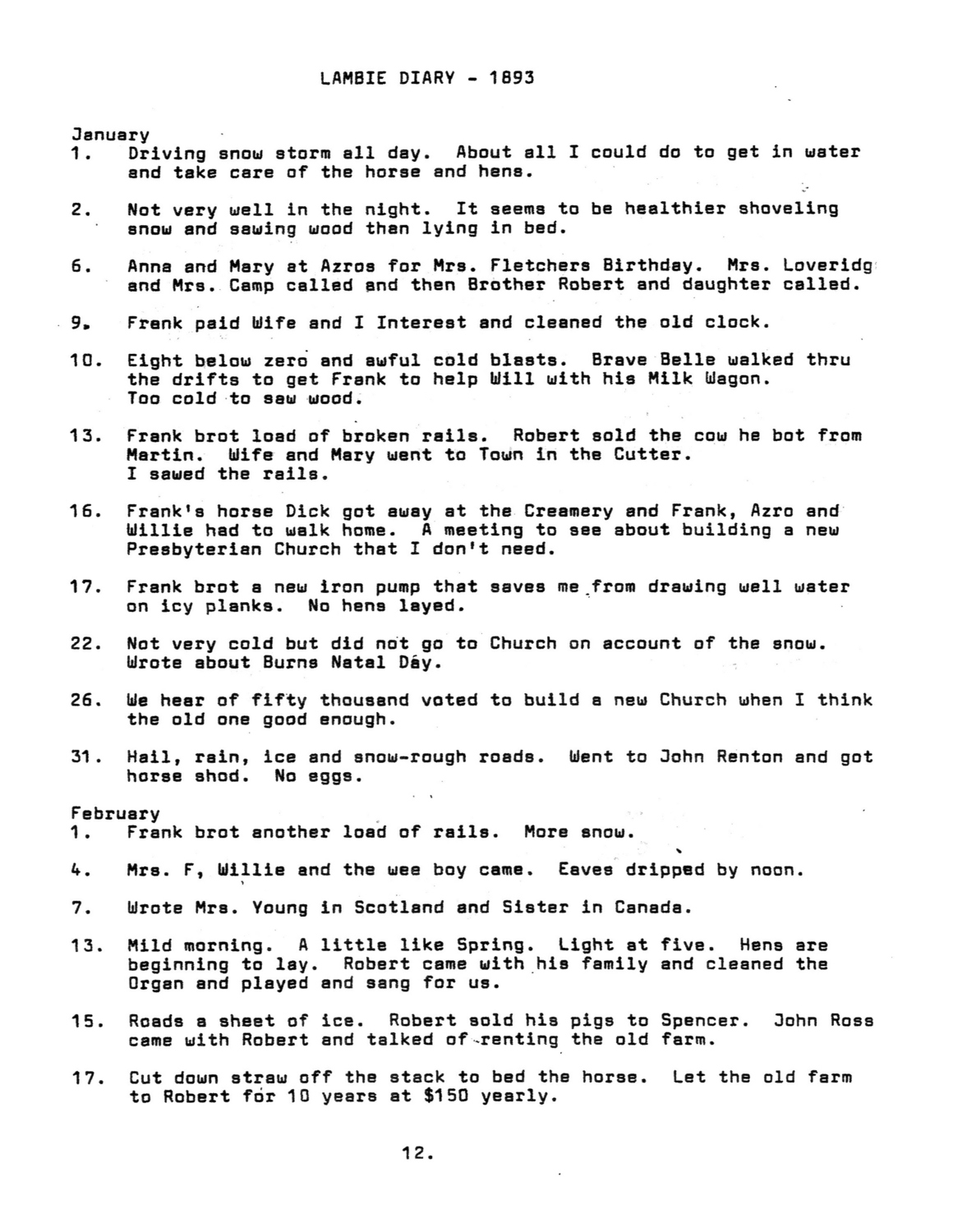 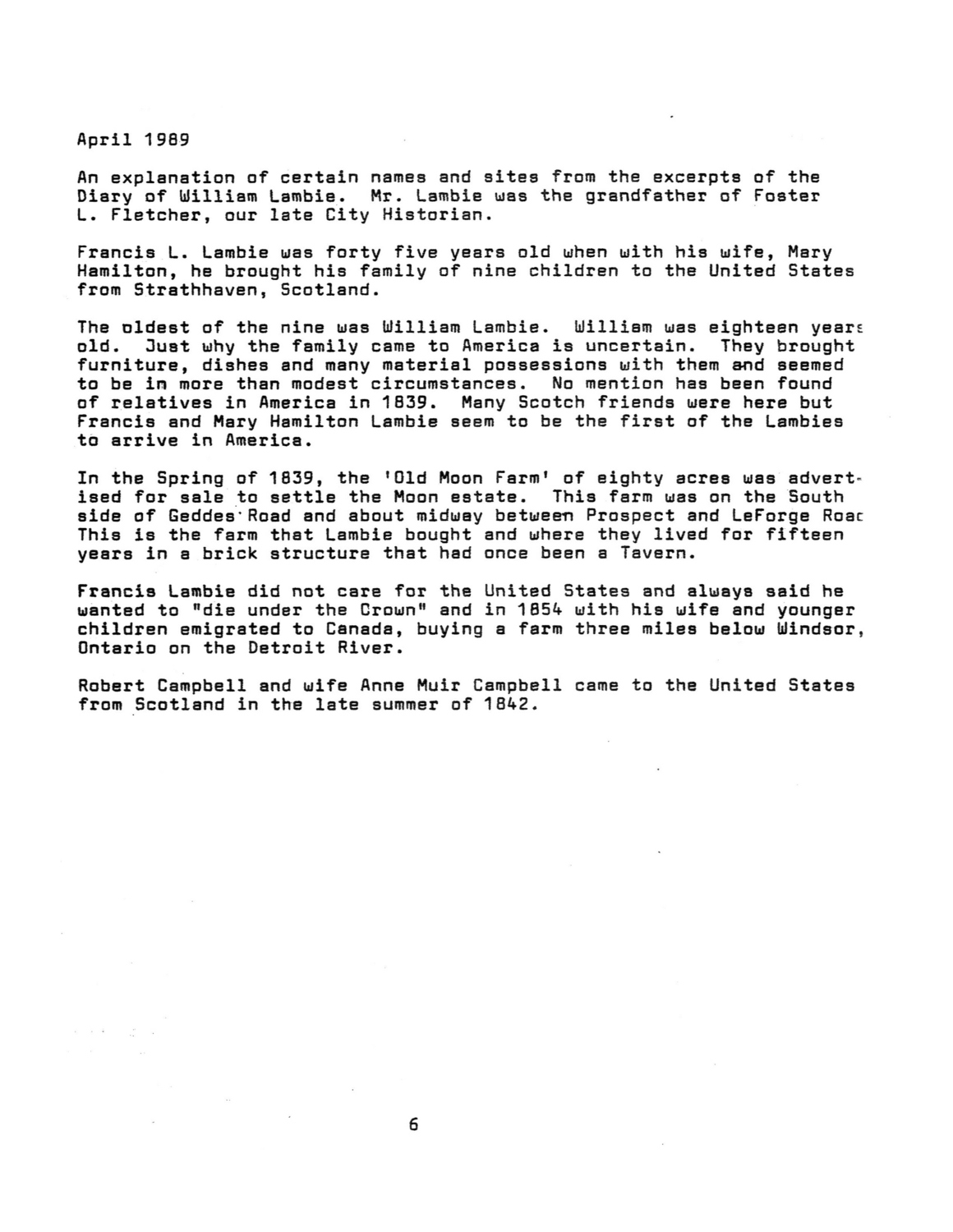 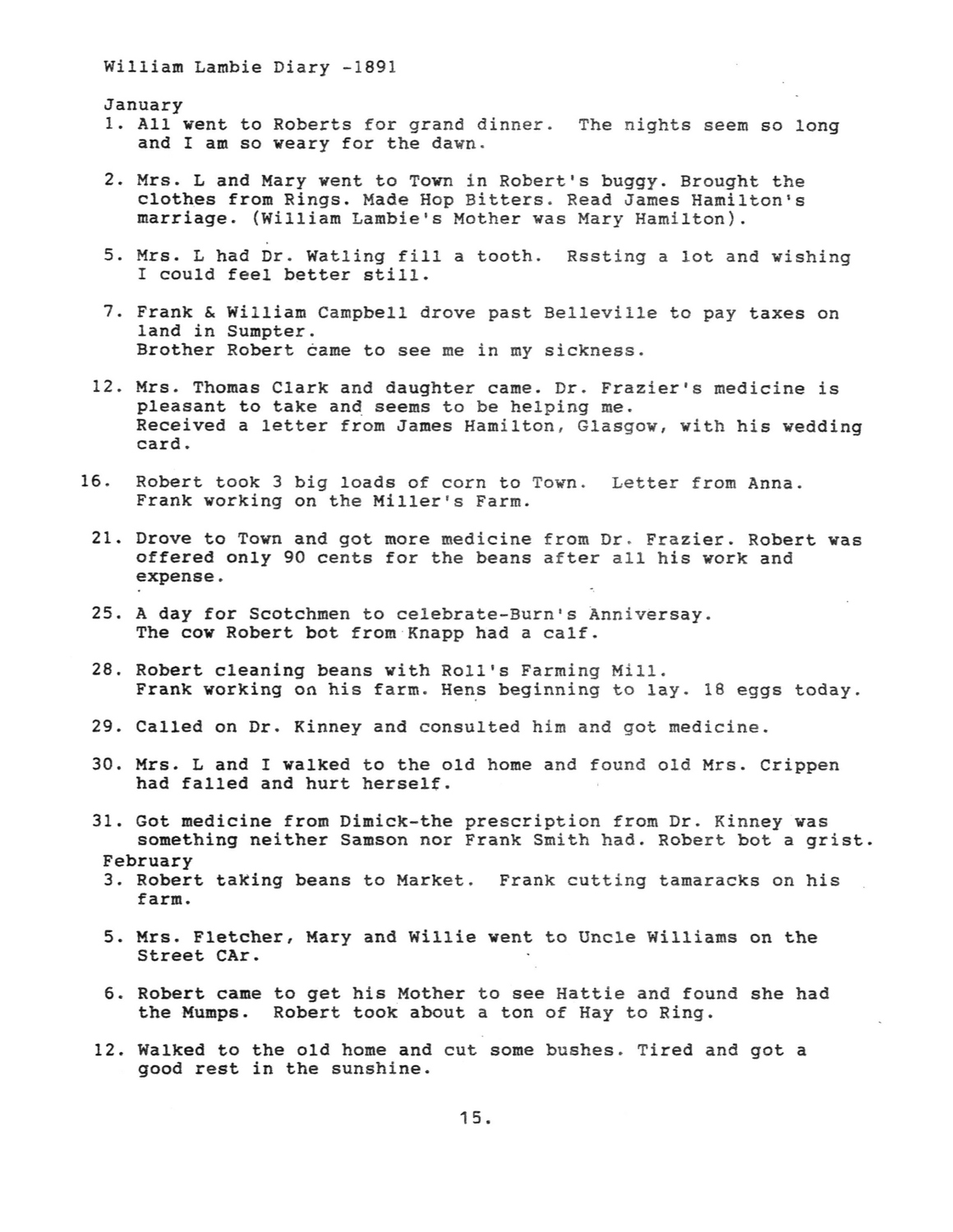 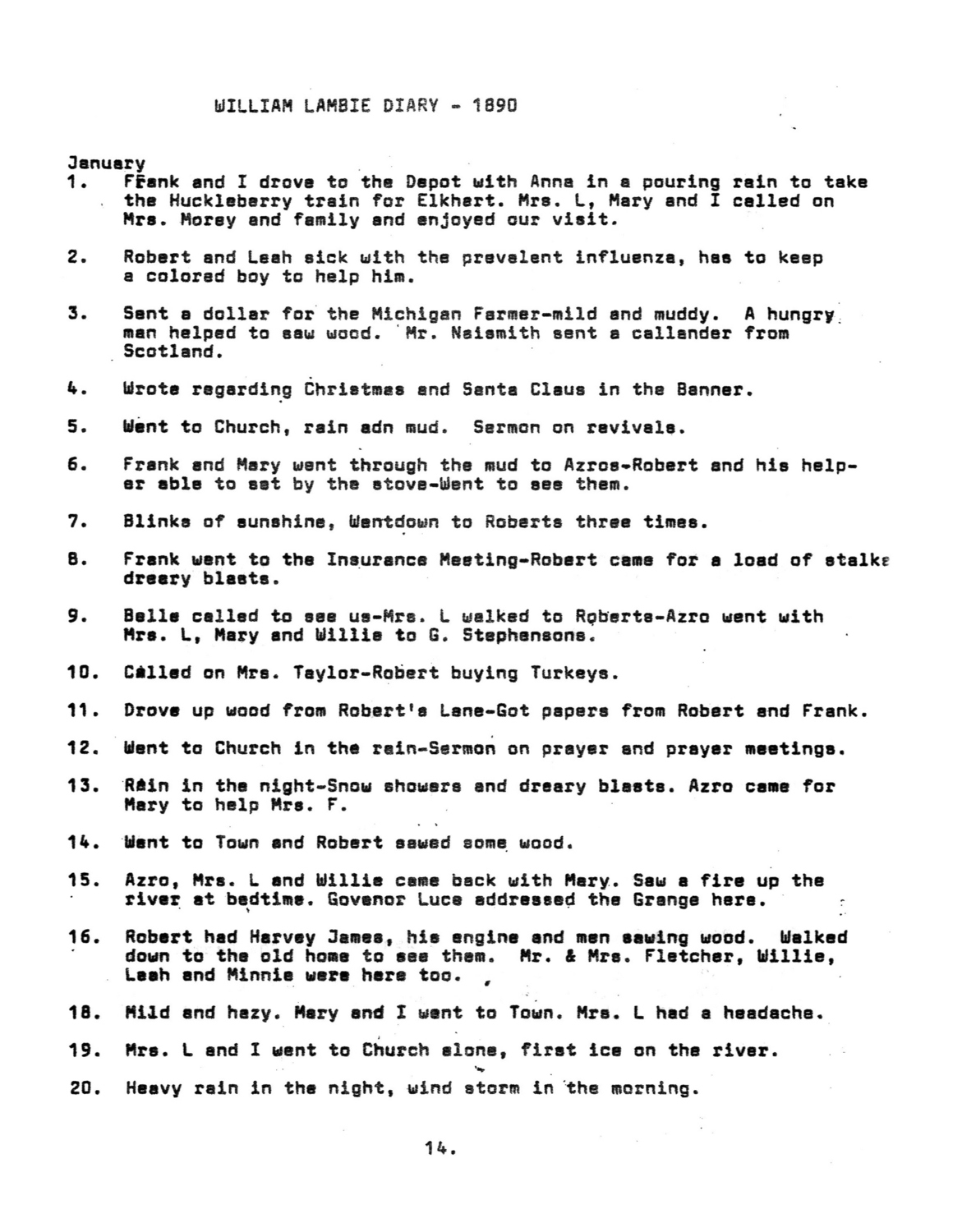 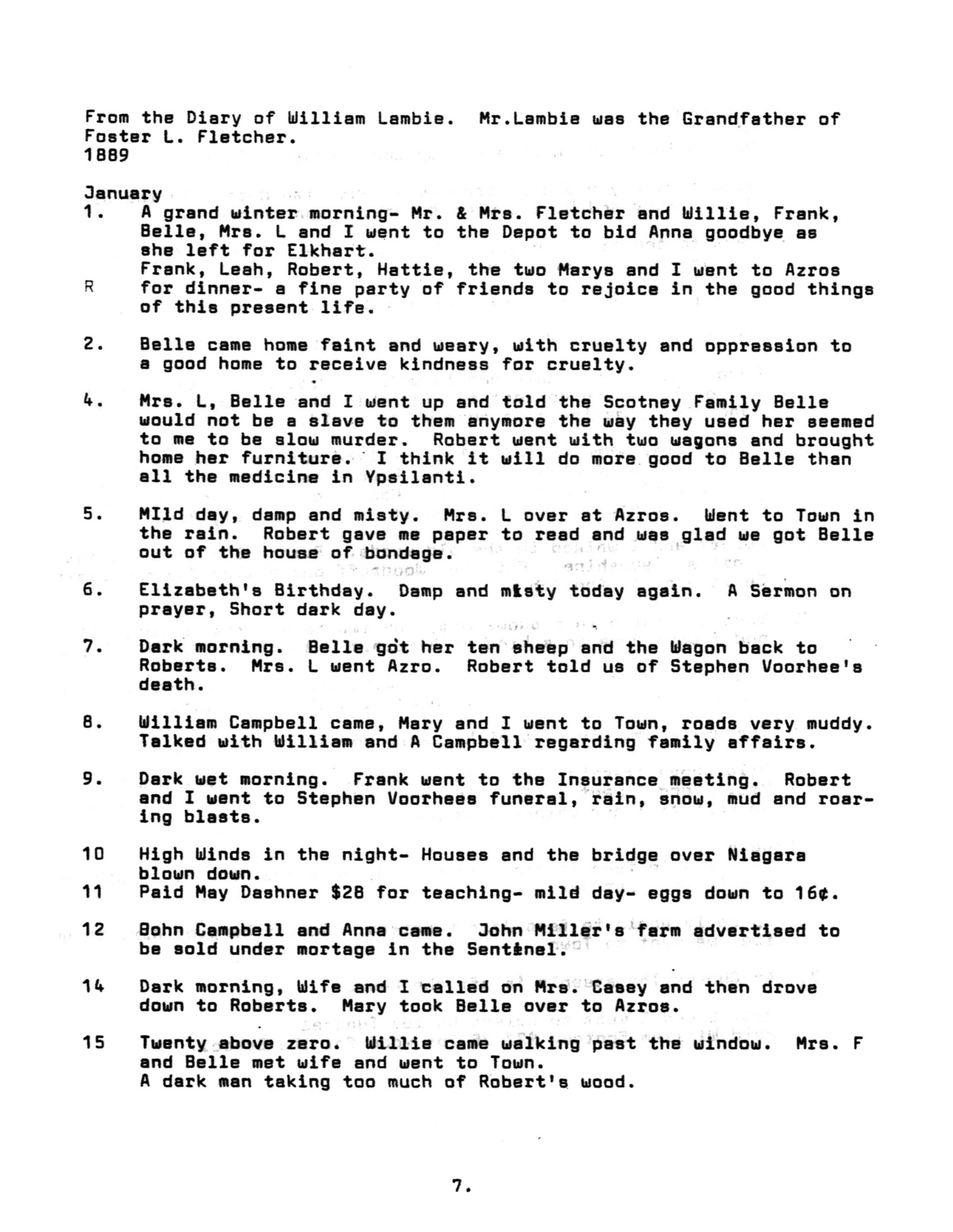 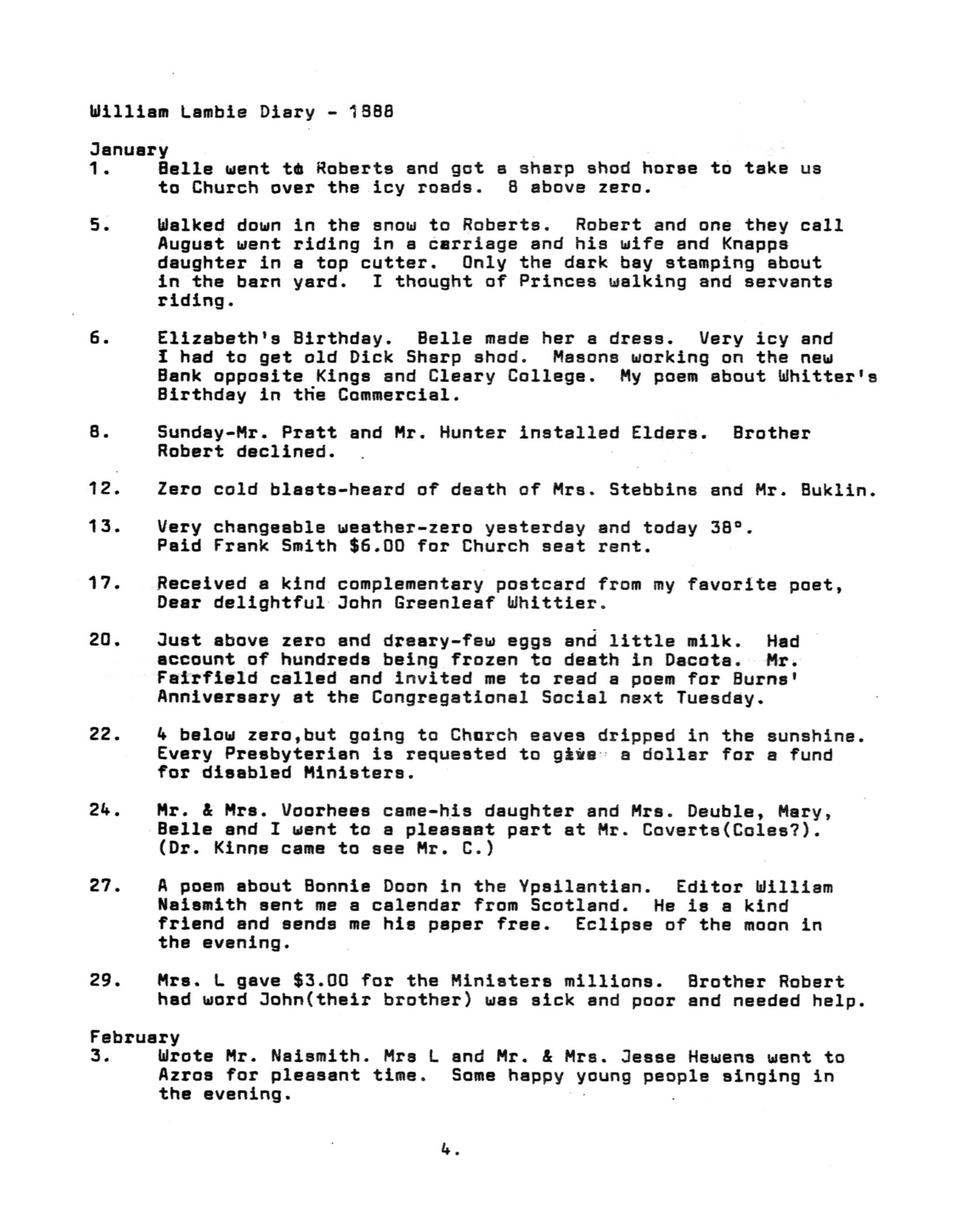 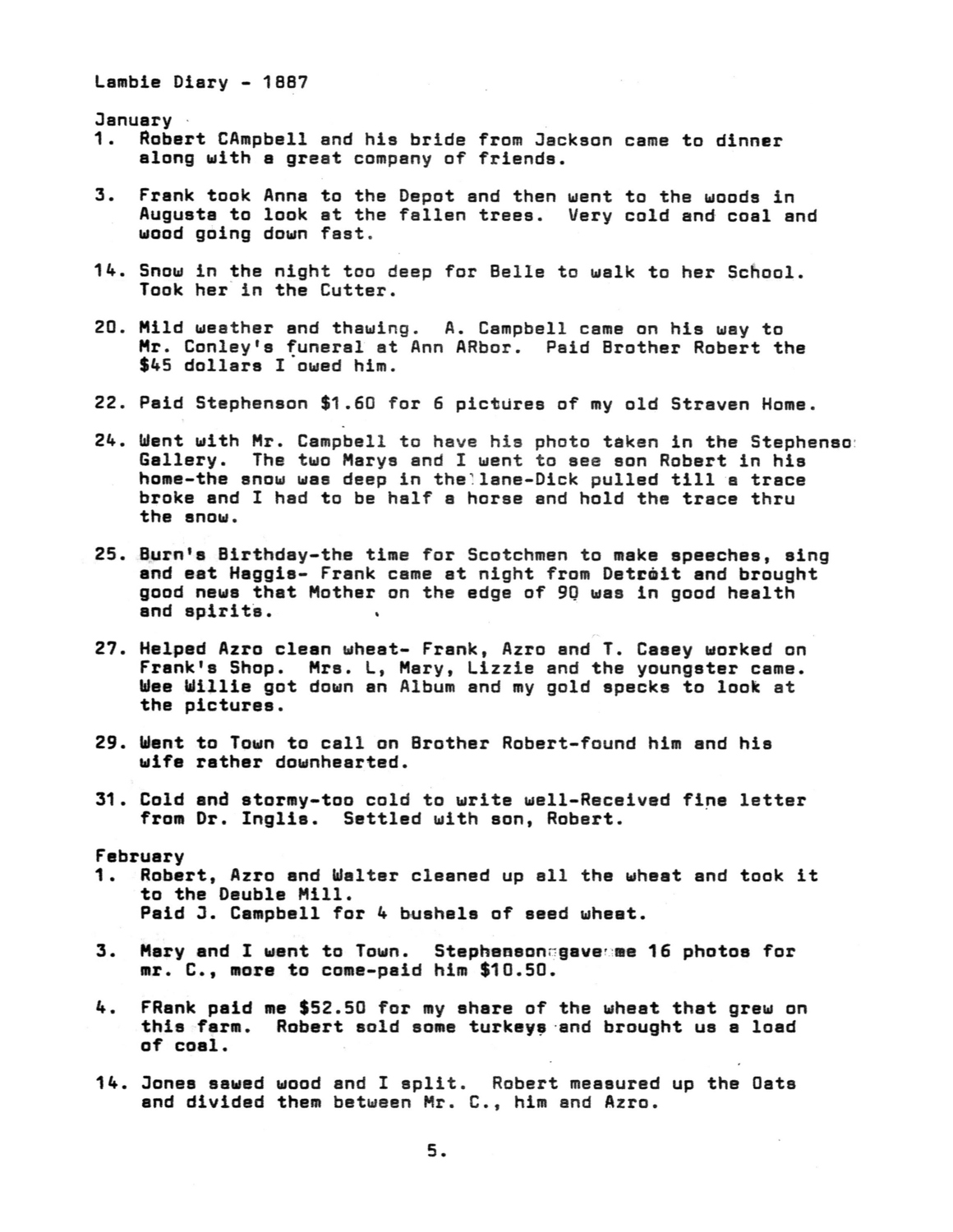 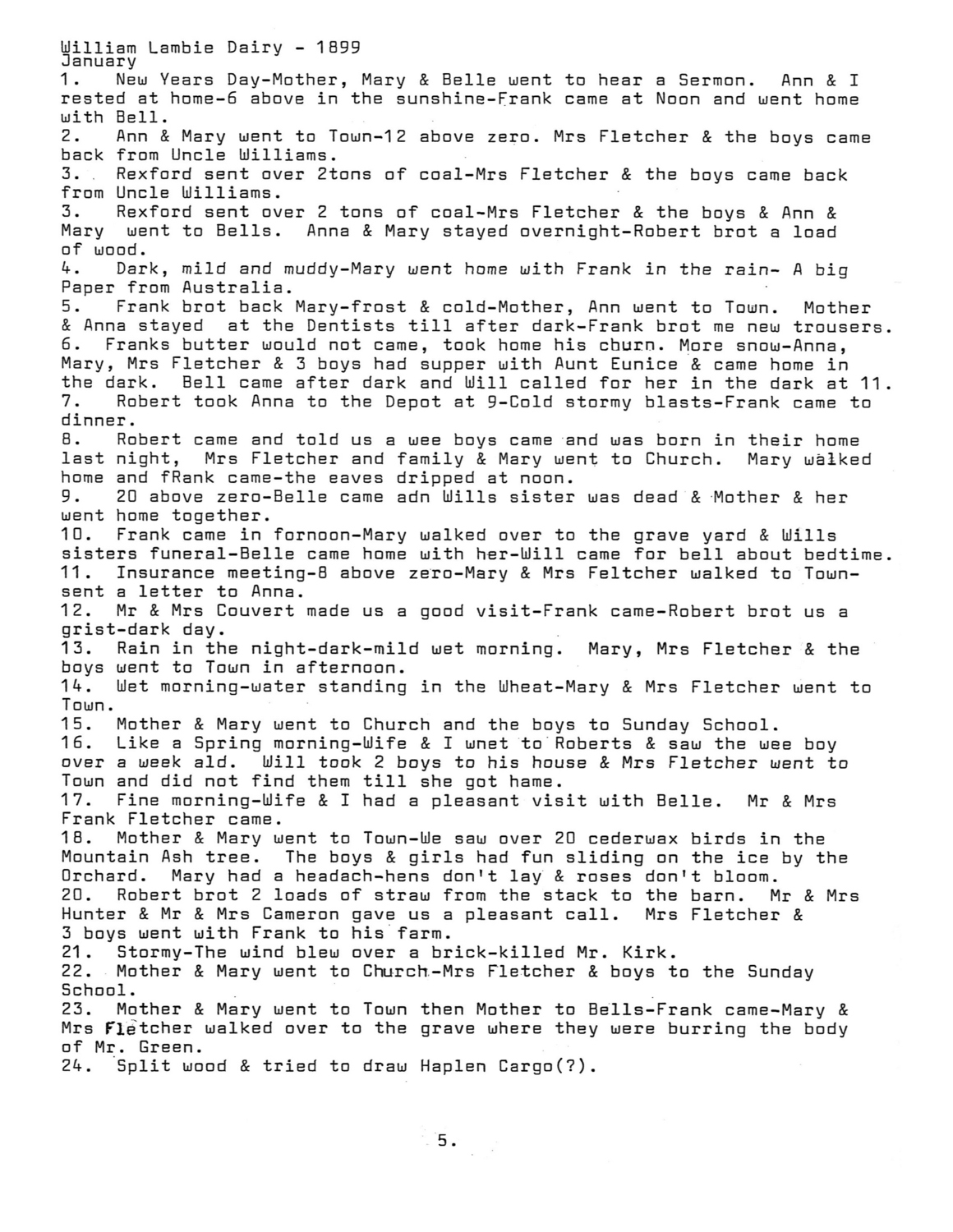