'And You Can Bring Me' 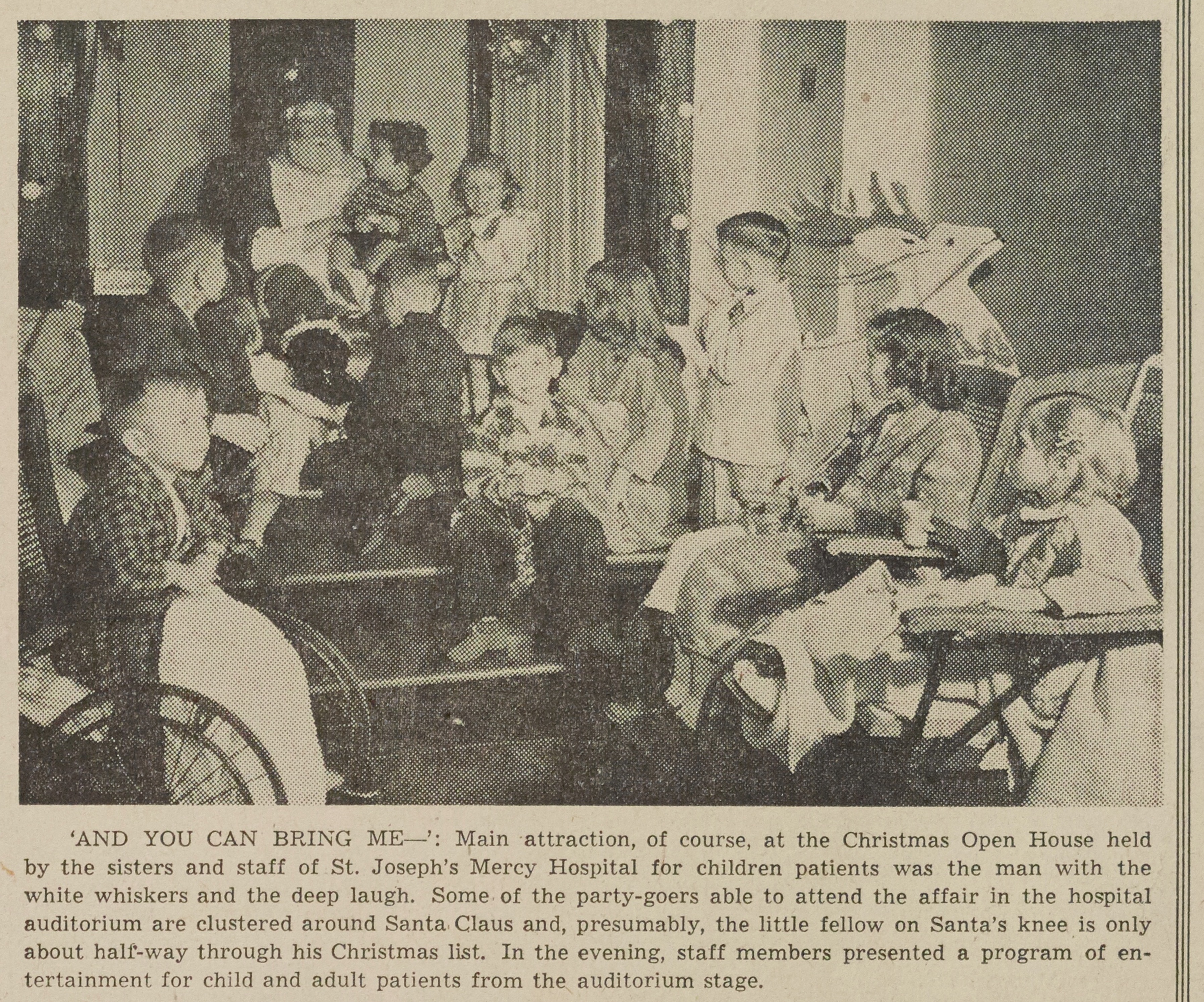 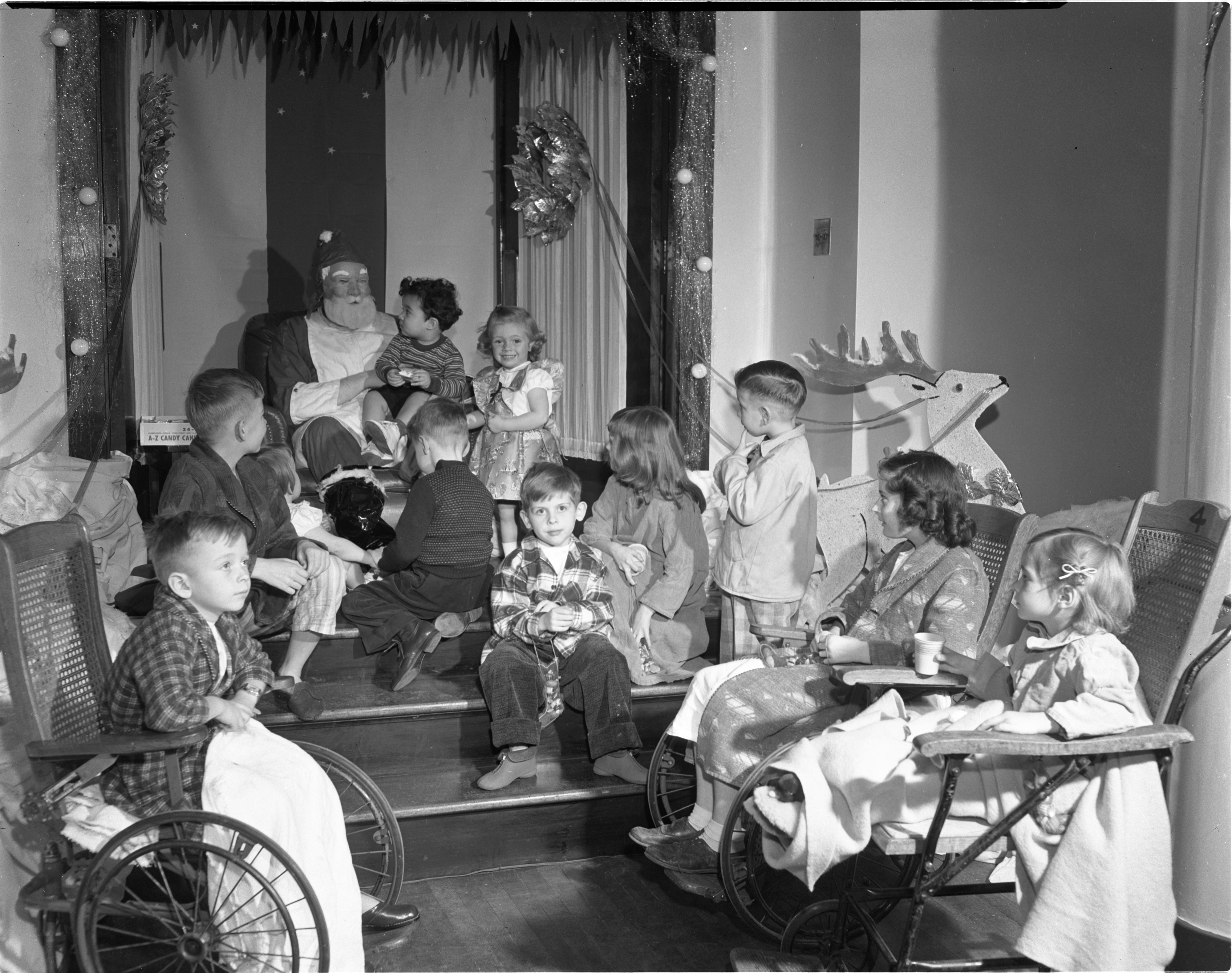 Published In
Ann Arbor News, December 17, 1948
Caption
'AND YOU CAN BRING ME -': Main attraction, of course, at the Christmas Open House held by the sisters and staff of St. Joseph's Mercy Hospital for children patients was the man with the white whiskers and the deep laugh. Some of the party-goers able to attend the affair in the hospital auditorium are clustered around Santa Claus and, presumably, the little fellow on Santa's knee is only about half-way through his Christmas list. In the evening, staff members presented a program of entertainment for child and adult patients from the auditorium stage.
Copyright
Copyright Protected 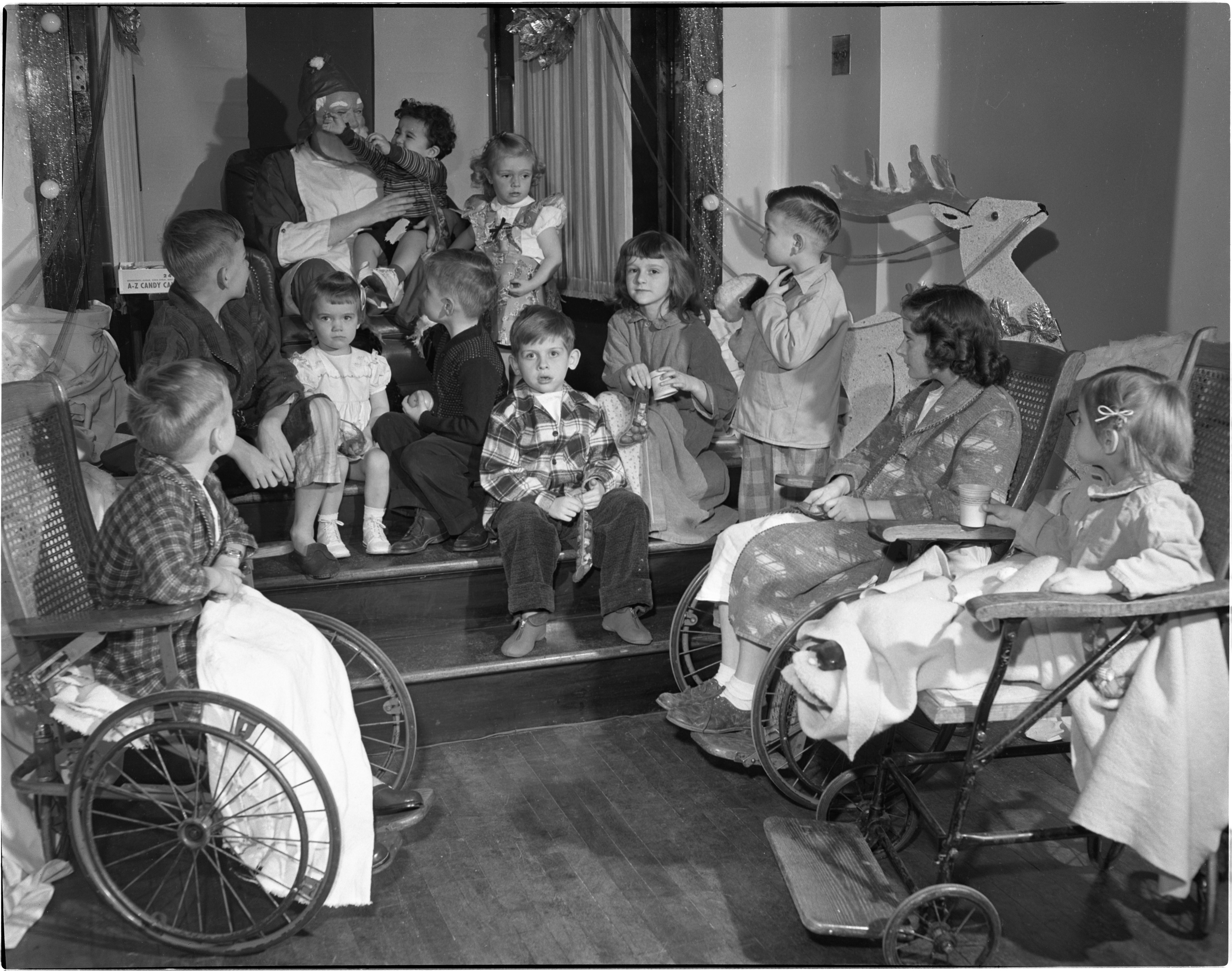 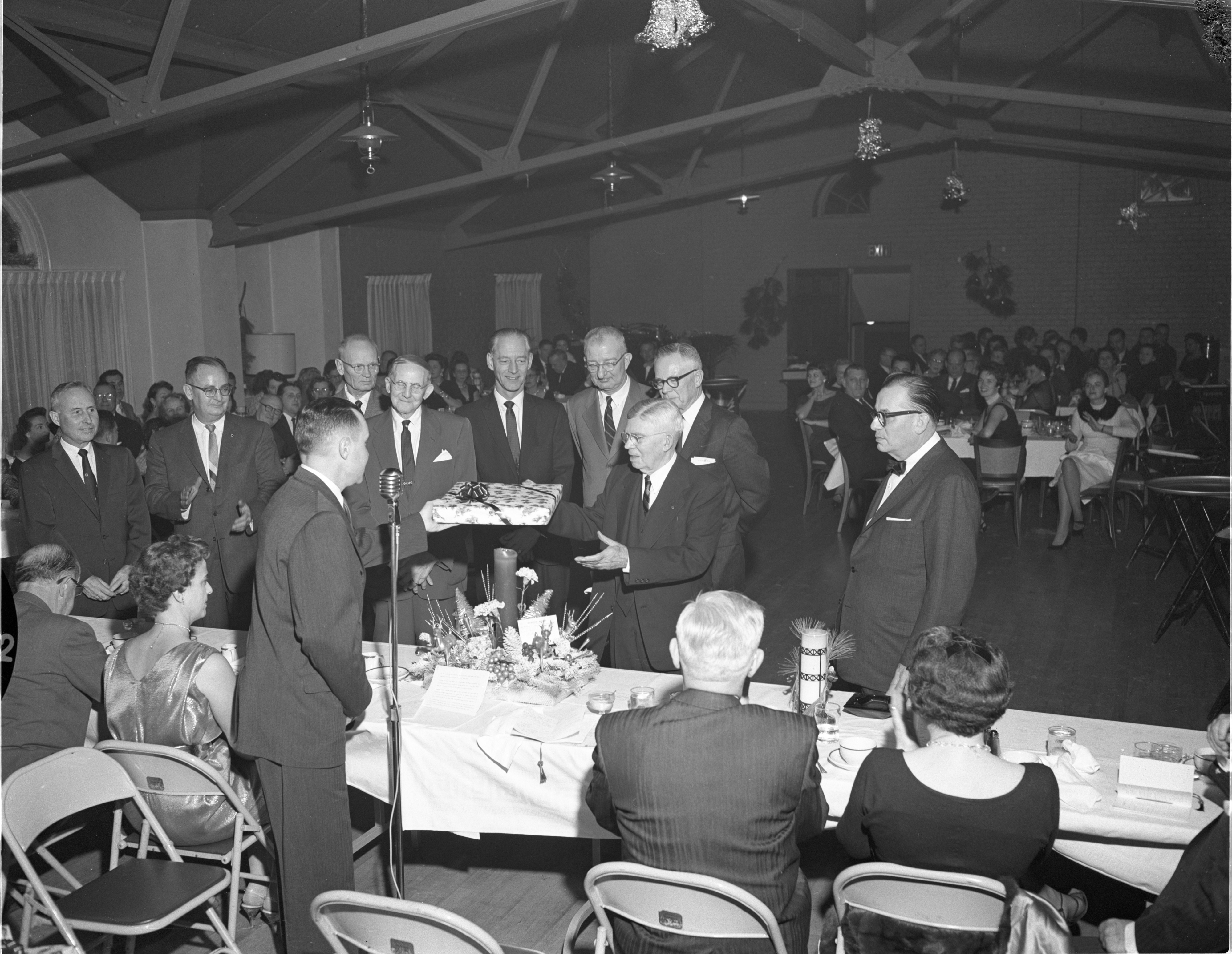 Published In
Ann Arbor News, December 19, 1959
Caption
HONOR REALTORS: J. Karl Malcolm, 83-year-old local realtor, receives from Donald A. Duncanson, Ann Arbor Board of Realtors president, a plaque in recognition of his service as president of the board in 1928 and 1934. The plaque and 11 others were presented to former presidents at a realtor board Christmas party Thursday at the Washtenaw Country Club. Those shown who received plaques are (left to right) Roswell Dillon, Wendell Hobbs, Alfred E. Shanklin, George Cornell, Stewart Butts, Maynard Newton, sr., Floyd Sergeant and Edwin Haab. Three others not shown received plaques. They are V. O. Nelson, Louis C. Andrews, sr., and L. D. Carr of Frankfort. Carr, who observes his 100th birthday Jan. 29, was the board's president in 1920.
Copyright
Copyright Protected 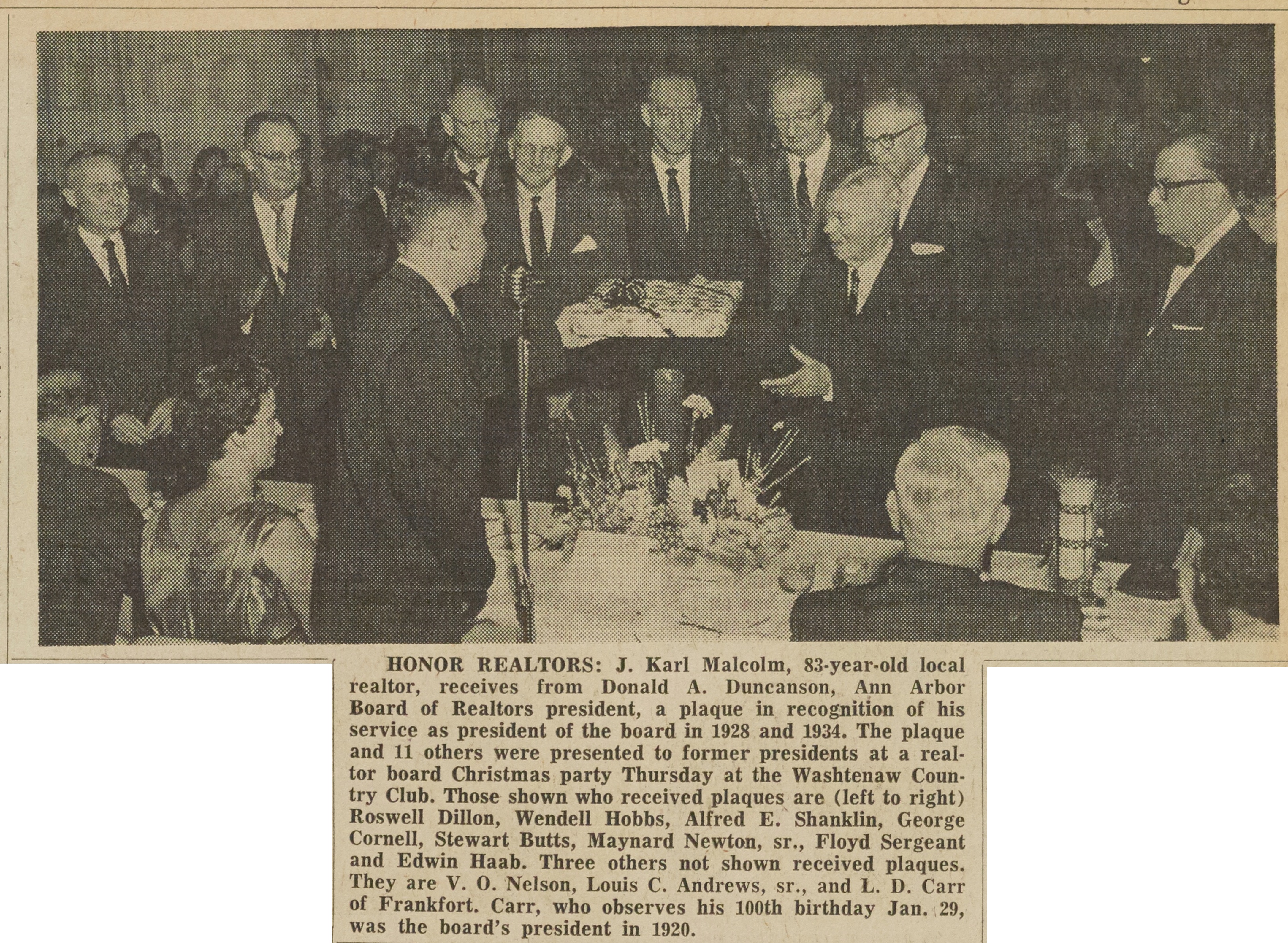 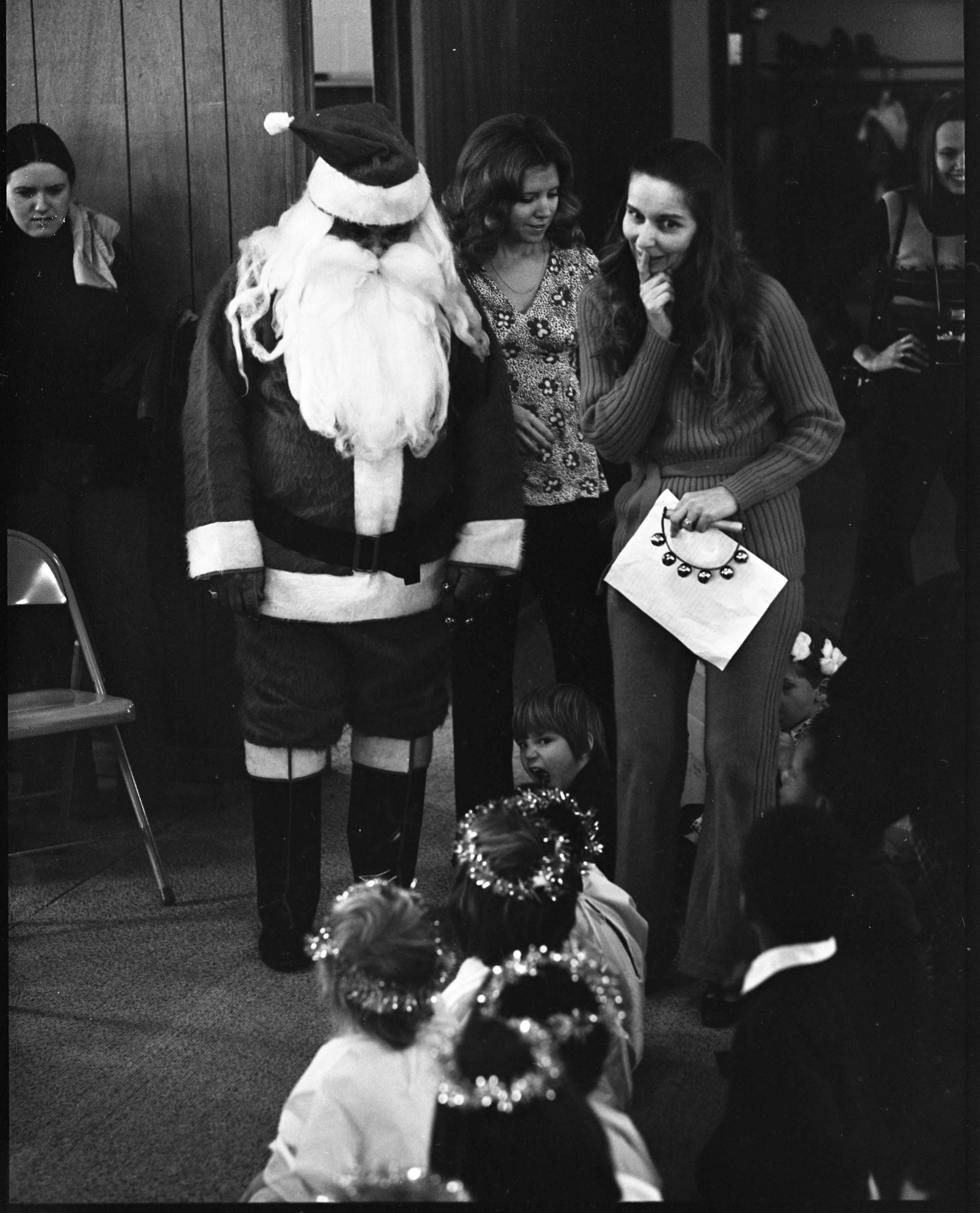 Published In
Ann Arbor News, December 21, 1973
Caption
"That's not Santa Claus. That's a man in there," came the cry from one 4-year-old when he spied the jolly man in the red suit. And right he was. Senior citizen Arthur Smith volunteered for the role. Joyce Dean and Patty Garber from the staff of the preschool program at Wines Elementary School, introduced him. It was all part of the fun shared by members of the Northside Senior Citizens Association and the preschoolers from Wines at a joint Christmas party.
Copyright
Copyright Protected 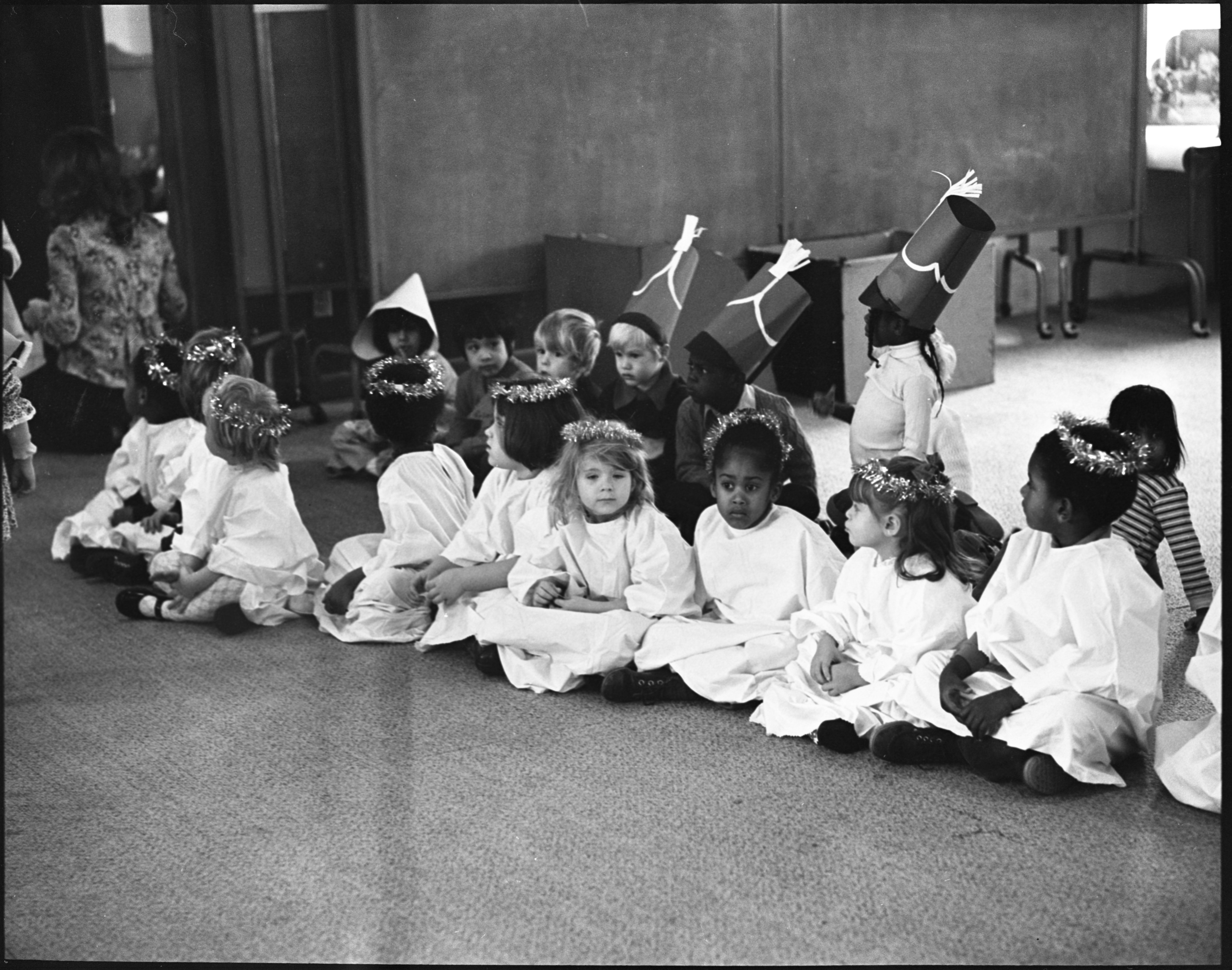 Published In
Ann Arbor News, December 21, 1973
Caption
10 little angels, all in a row, comprised a noisy angel band. Behind them, some toy soldiers and dancing dollies await their turns to leap from Santa's workshop and perform for the seniors.
Copyright
Copyright Protected 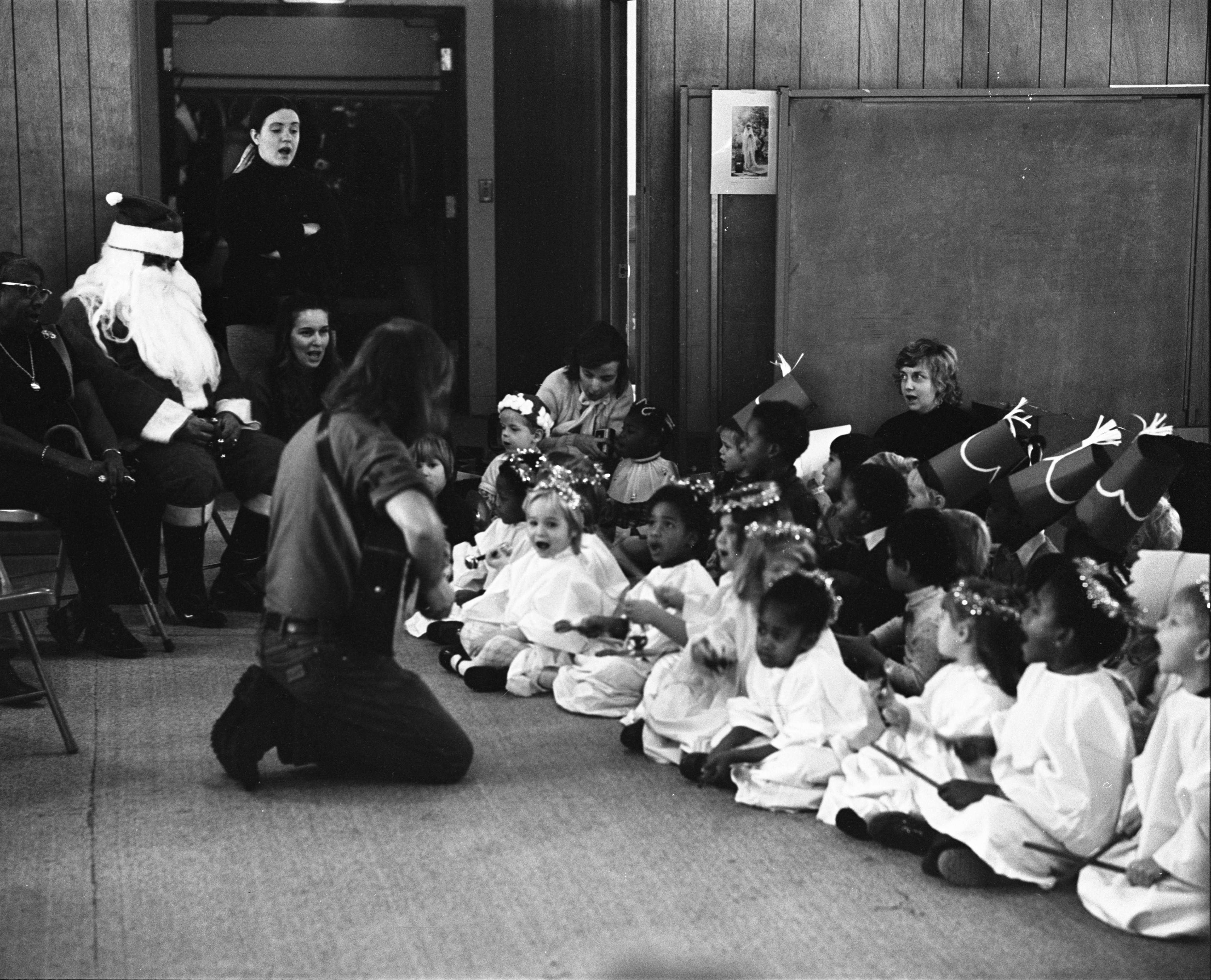 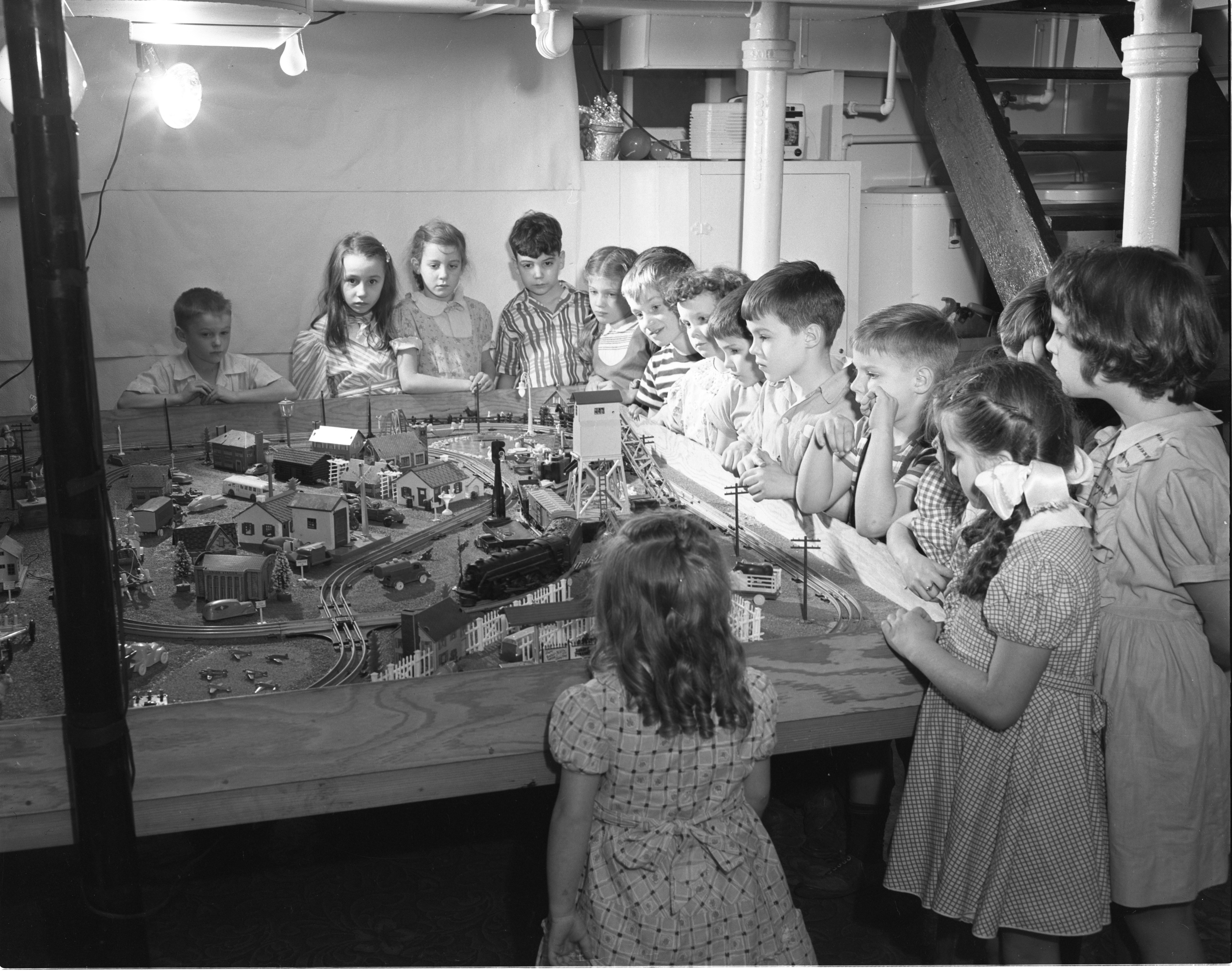 Published In
Ann Arbor News, December 18, 1948
Caption
ALL EYES ON MINIATURE TRAIN: A miniature village, complete with electric train, hospital, houses, an elevator, trucks, ambulance, cars and planes, focuses the attention of the above third grade pupils from University Elementary School who were guests of Bobbie Tompkins at a Christmas party this week. The recreation room in the home of Bobbie's parents, Mr. and Mrs. E. E. Tompkins, 1795 S. State St., was turned over to the youngsters who found an almost limitless number of toys to play with. From left to right above are Phillip Tanner, Bobbie's cousin; Joanne Ivory, Jane Litzenberg, Bobbie Tompkins, Ann Coleman, Jackie Peterson, Sue Greenman, Jon Lopez, Cubbie Eggertsen, Wayne Van Wagoner, Mary Craig (just the ruffle on Mary's dress, her hand, and the tip of her nose show), and Penny Foster. The girl with her back to the camera is Starlett Tanner, another cousin of Bobbie. At the far right, the hand and the forehead which it is rubbing belong to Jimmy Stockard, and it's Allison Dempster who is peering over the shoulders of Mary and Penny. Each child was presented with a gift at the party from a large Christmas tree. The party is an annual affair and was given this year for the third time.
Copyright
Copyright Protected
Subscribe to Parties