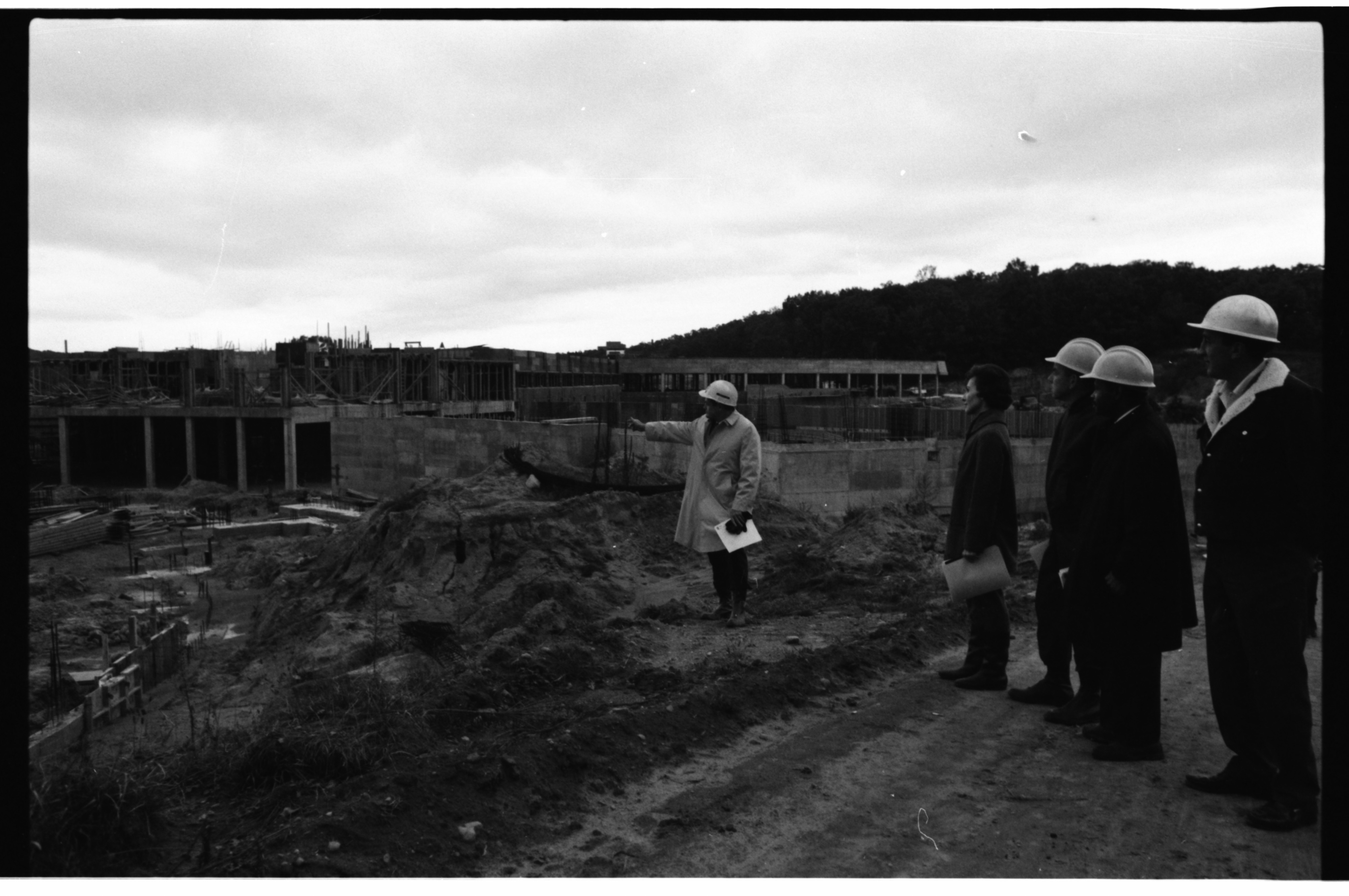 Published In
Ann Arbor News, October 12, 1967
Caption
Huron High Site Visited Architect Charles W. Lane cites a point of interest at the eastern end of Huron High School, now under construction. The portion of the school in the photo will be an academic wing. His booted and helmeted audience includes (from right) Jerry Klump, job superintendent for the A. Z. Shmina and Sons Construction Co., and three members of the Board of Education -- Dr. Harold J. Lockett, President Hazen J. Schumacher, and Mrs. Frances Felbeck. The new school, on Fuller Rd. near its intersection with Geddes, is expected to be ready for occupancy by Sept. 1, 1968.
Copyright
Copyright Protected 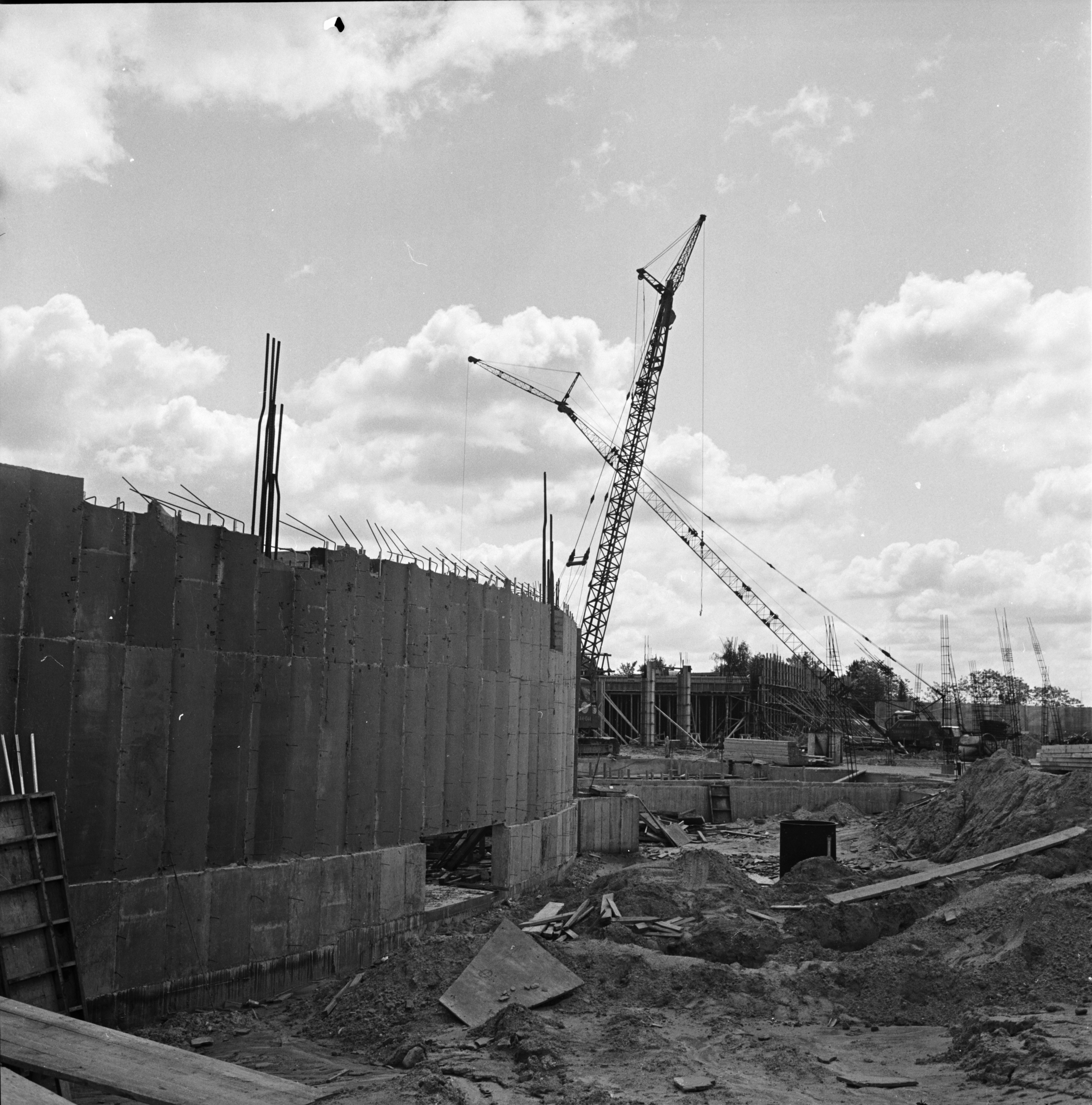 Published In
Ann Arbor News, July 4, 1967
Caption
Building Of New High School Progresses Ann Arbor's second senior high school, Huron High School, continues to take shape at its site on Fuller near Geddes on the northeast side. The building, according to Sooren Gozmanian, the school district's planner-expediter, is on schedule for occupancy in September, 1968. Construction contracts totaling $9.3 million were let for the project last year. The school is designed to accommodate about 1,800 students in grades 10 through 12.
Copyright
Copyright Protected 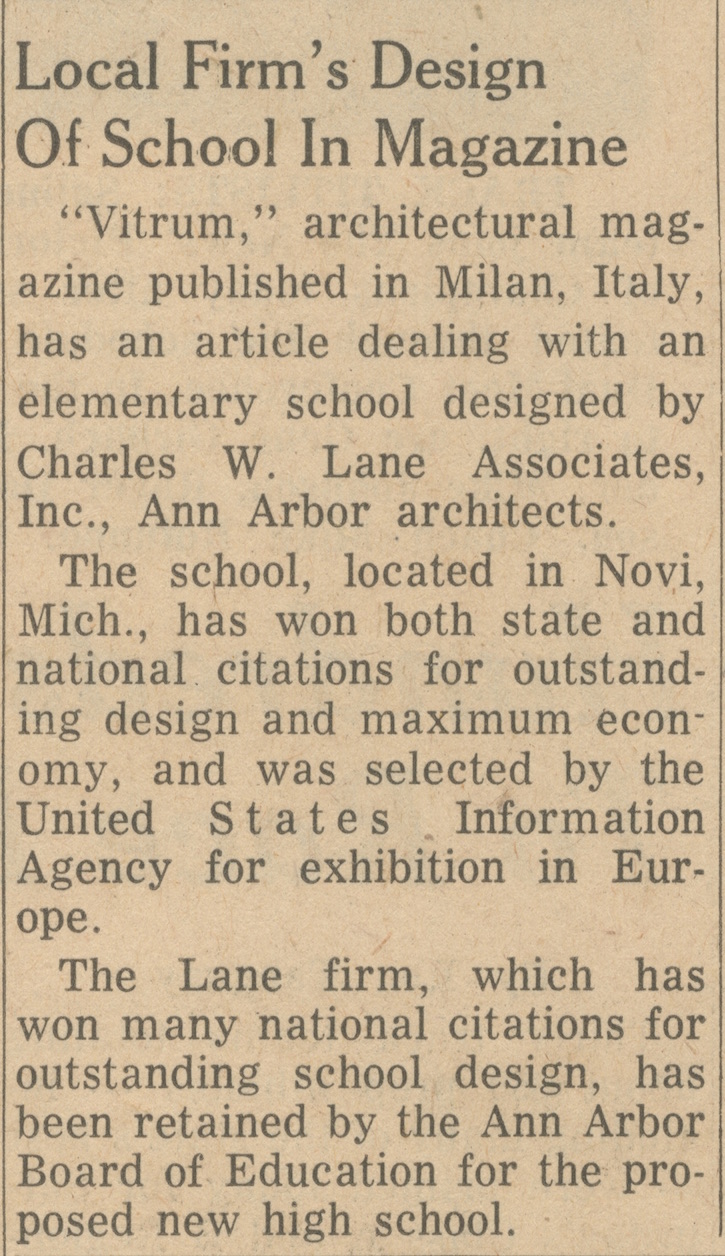 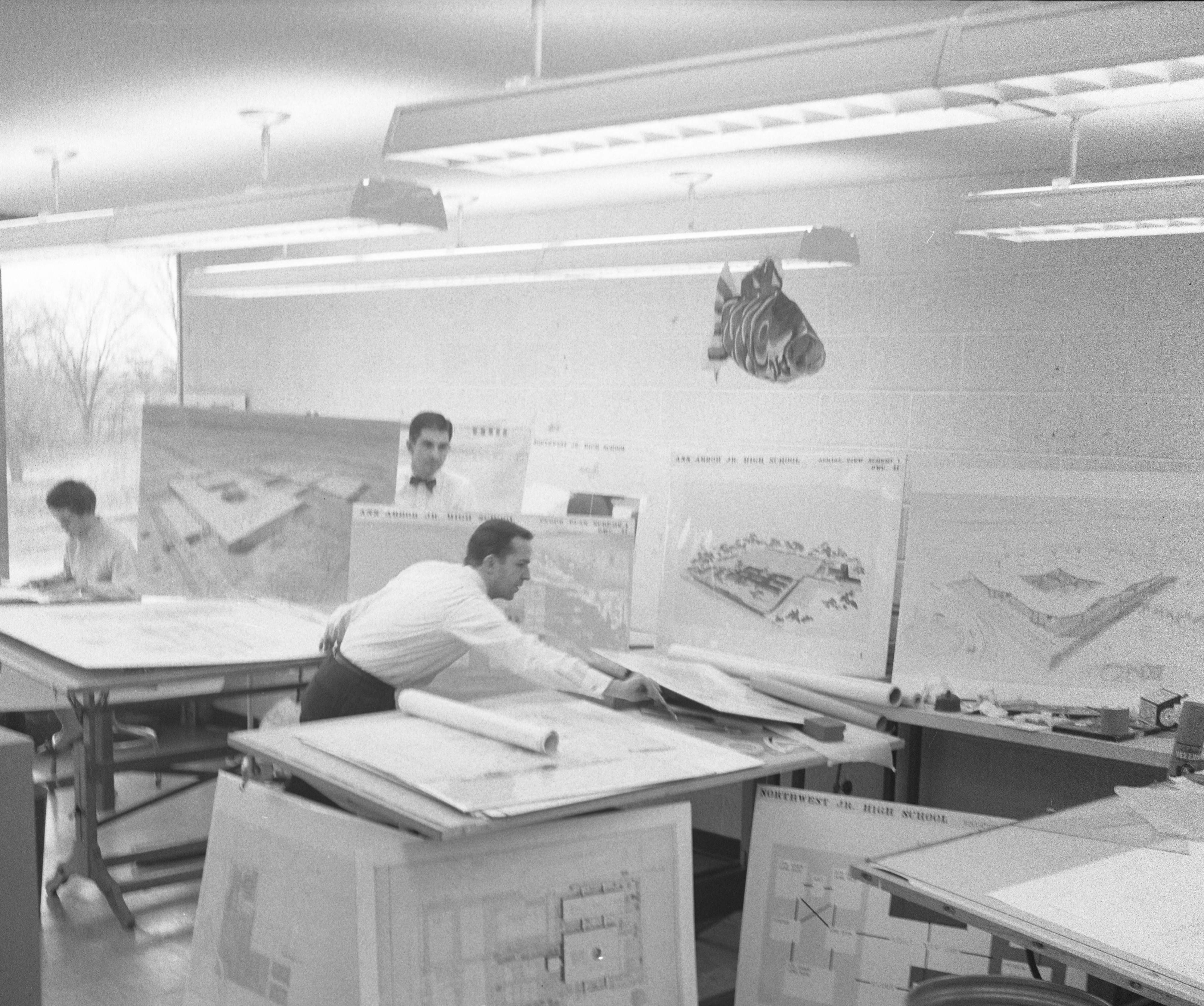 Published In
Ann Arbor News, December 7, 1957
Caption
The Drawings Were Discarded: Trial and change is the method by which the junior high is being designed into as perfect a product as possible. Some of the 21 floor plans thought up, changed and discarded are shown while Miss Beverly Gee works and Robert Carrigan, jr., watches Richard Millman reach for an object.
Copyright
Copyright Protected 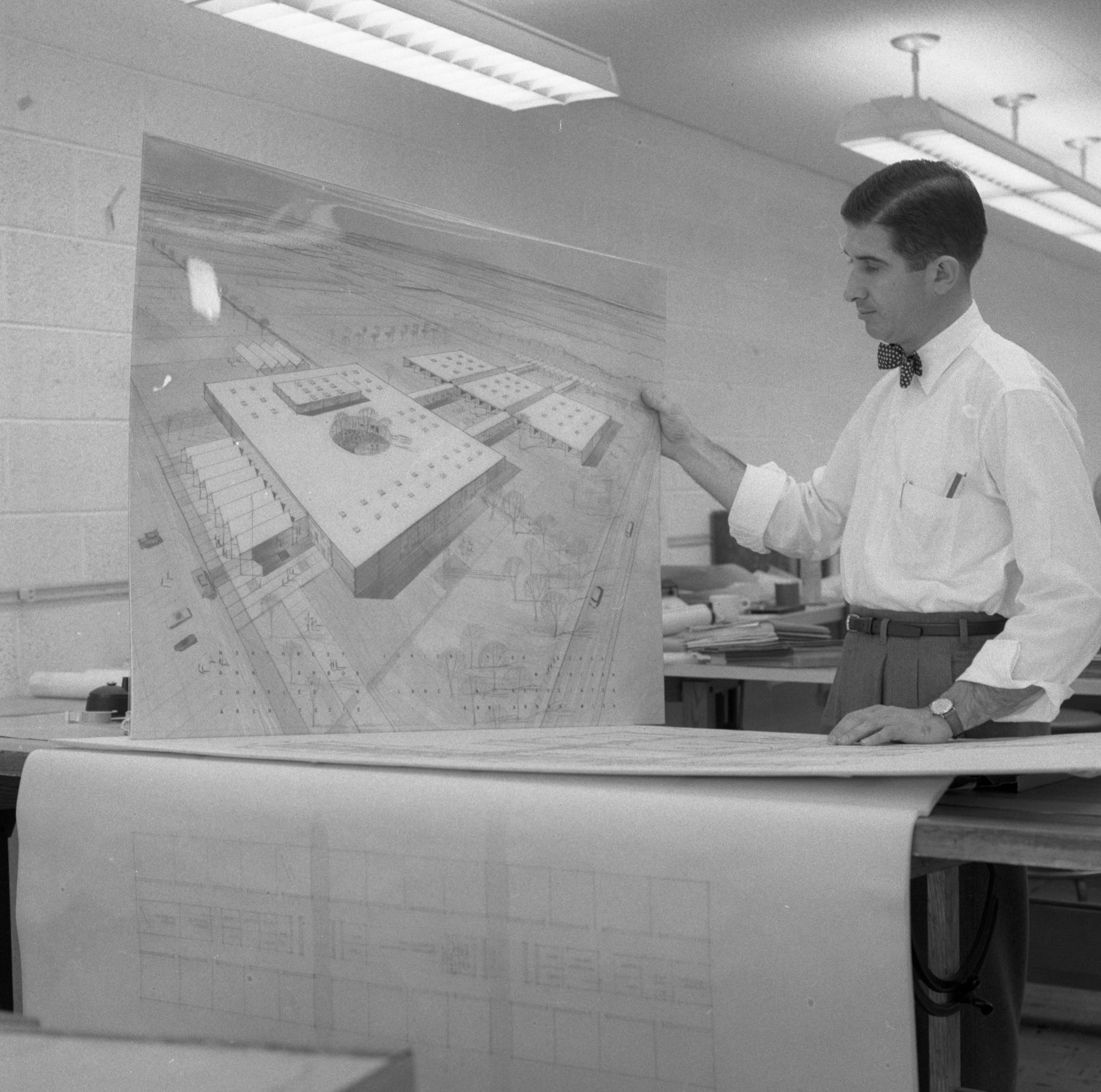 Published In
Ann Arbor News, December 7, 1957
Caption
It Took 5,000 Man Hours: This architect's concept of how the projected northwest junior high school could look is shown by Robert Carrigan, jr., Lane's chief designer. Before the design (above) was conceived and put on paper 5,000 man hours of study and drawing were consumed. About 30,000 more man hours will be spent by Lane's staff before the school is built. It is emphasized that the design (above) does not necessarily represent the way the projected junior high will look. No design or architects' plans on the junior high have been accepted by the Board of Education.
Copyright
Copyright Protected 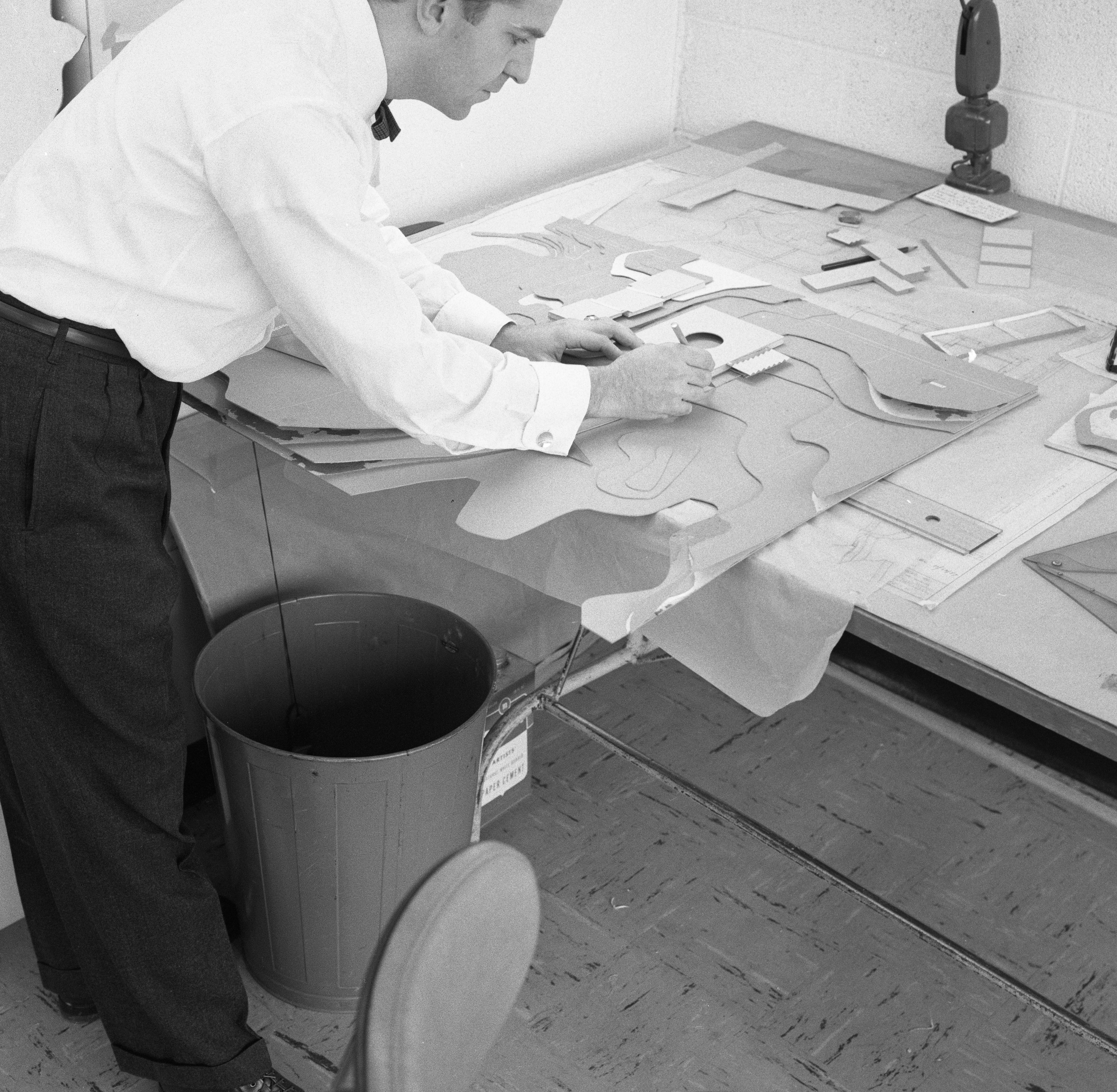 Published In
Ann Arbor News, December 7, 1957
Caption
Mockup Of Site: Richard Millman is shown working on a mockup of the 27-acre site of the projected northwest junior high school. The mockup gives Lane's staff a third-dimensional view of grade levels and locations of the school on the site, plus the flow of exterior traffic helping in planning.
Copyright
Copyright Protected 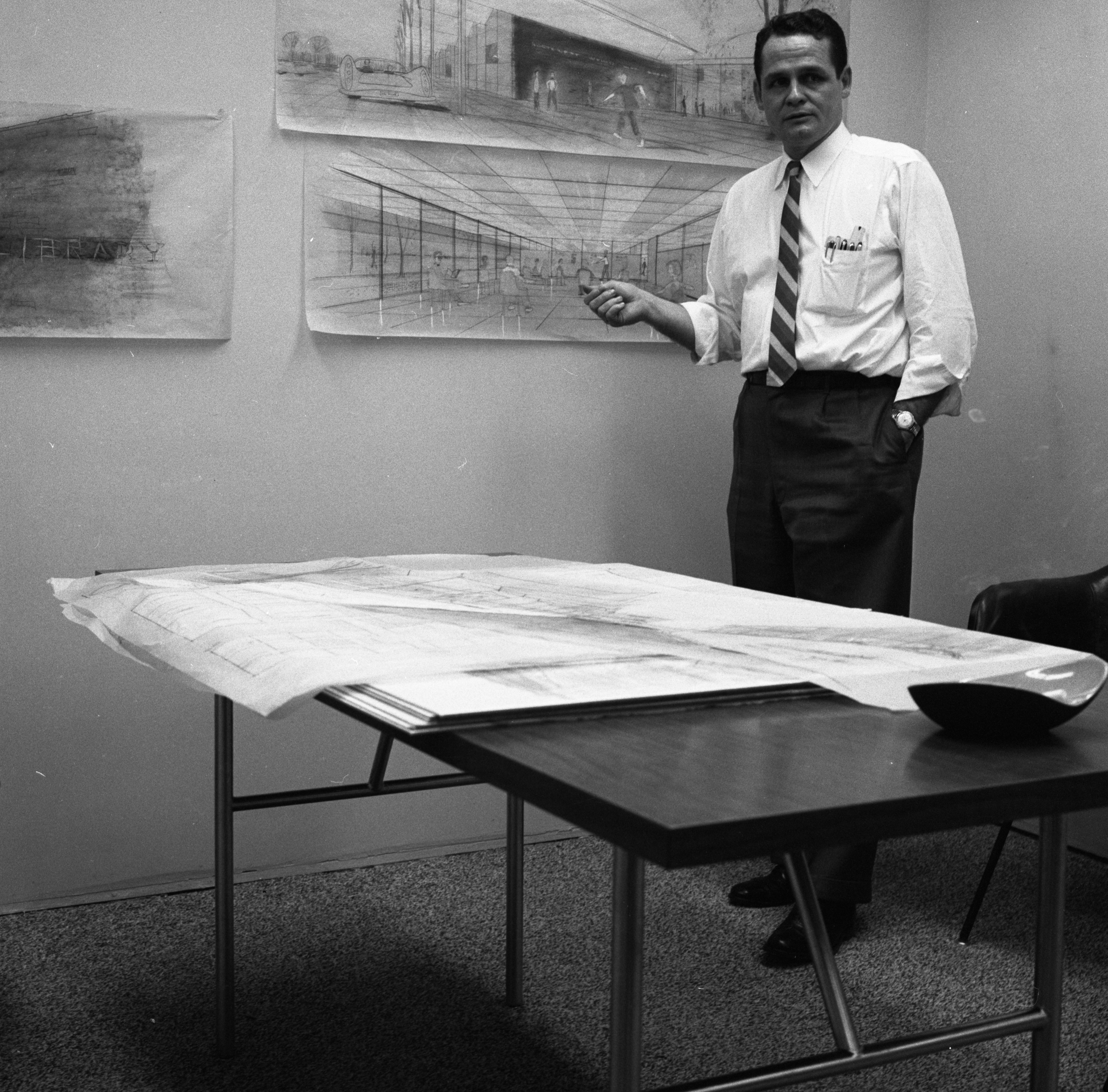 Published In
Ann Arbor News, December 7, 1957
Caption
How They Got This Way: How the exterior and interior spaces shown in free-hand drawings (above) were conceived is explained by Charles W. Lane. About 250 free-hand drawings similar to those shown were conceived and discarded for better ones as the result of meetings Lane held with his staff, conferences he had with school officials and the Citizens Advisory Committee, which is also aiding in the planning for the junior high. Nearly 150 persons are involved in planning the school.
Copyright
Copyright Protected 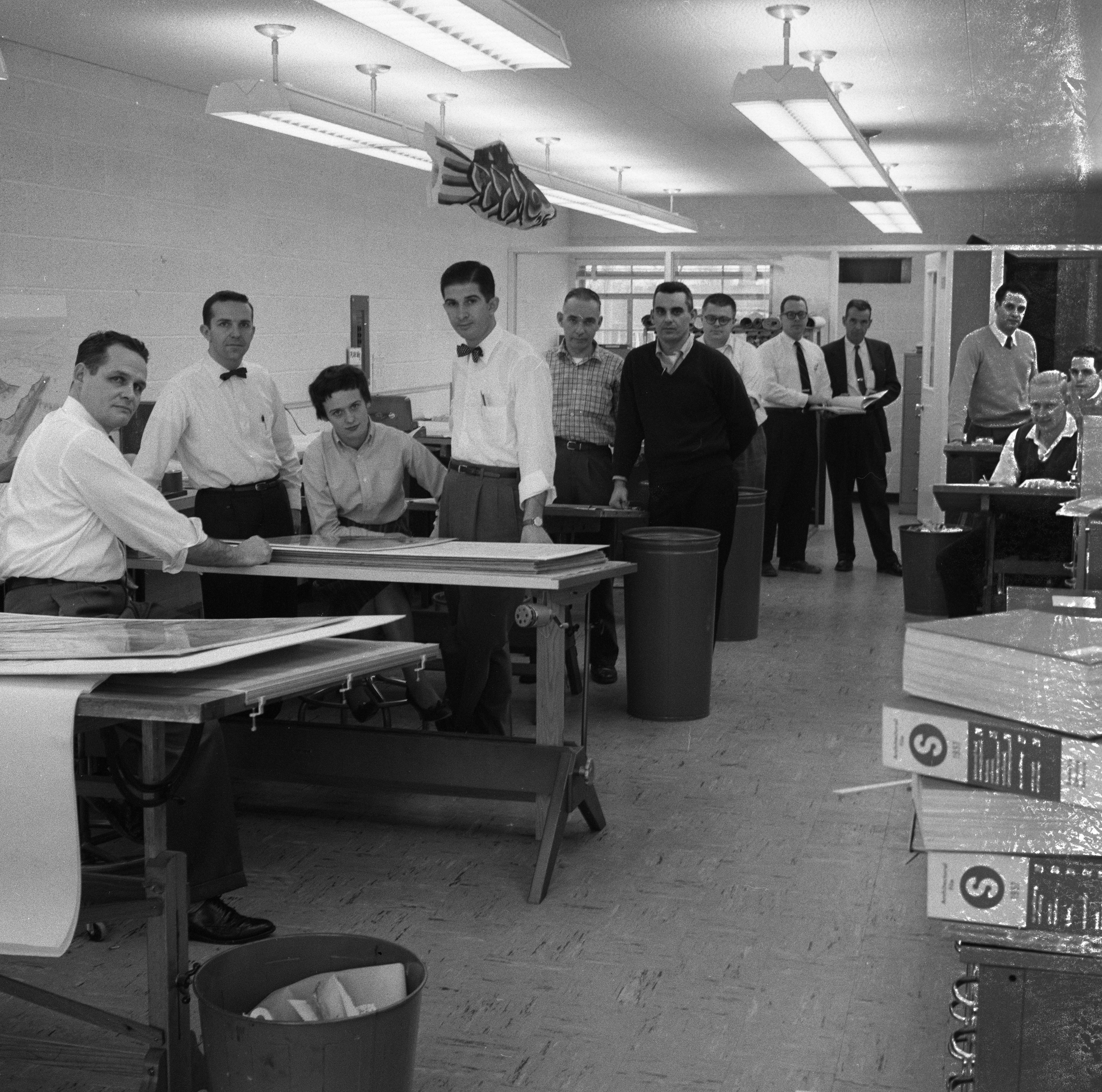 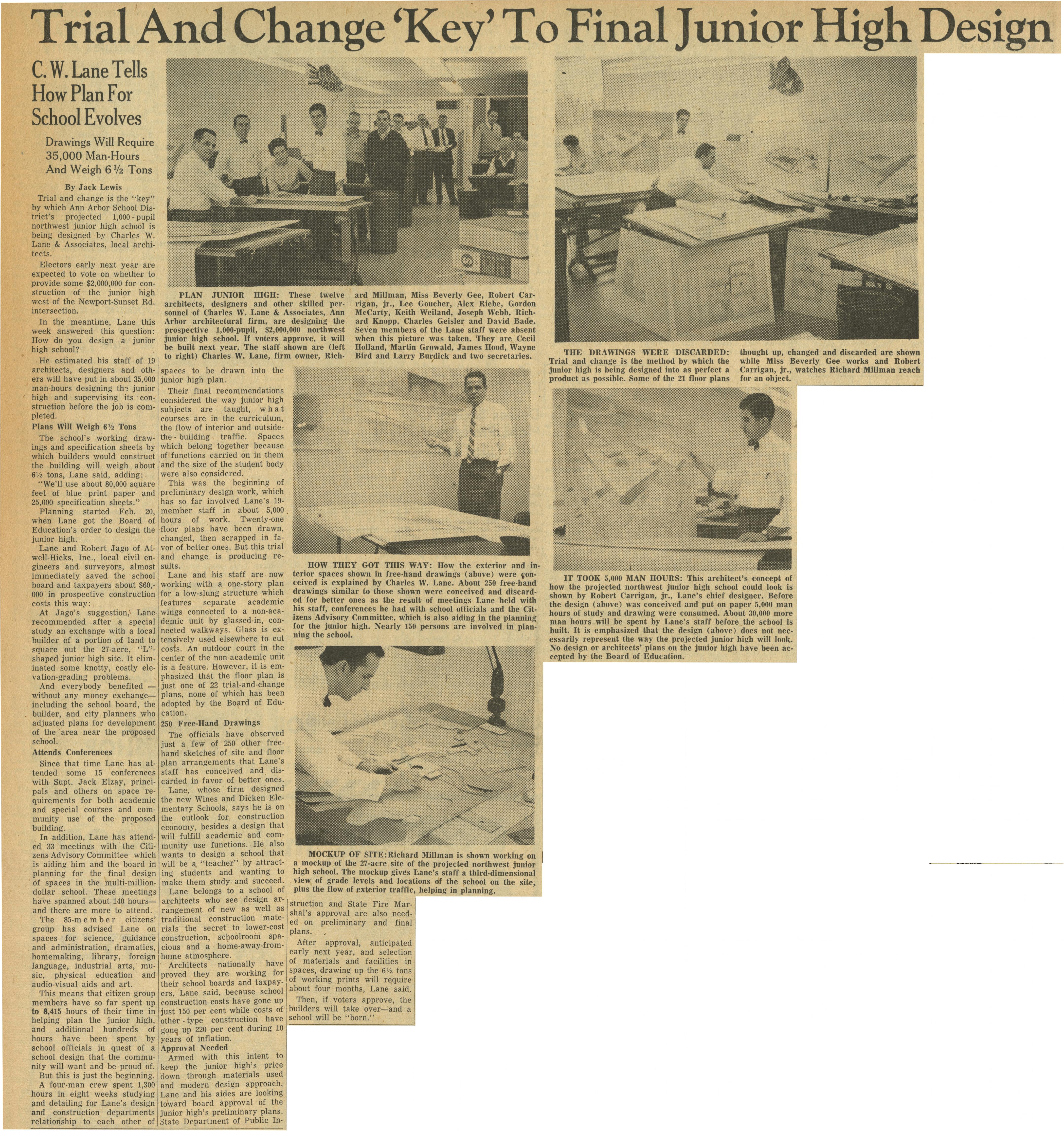