In 1972 the passage of Title IX empowered American women and girls to participate in competitive sports. Trailblazing young female athletes joined boys’ teams and pushed high schools and colleges to develop women’s varsity programs. When they encountered resistance, they took their cases to the courts.

Title IX is a federal civil rights law passed under the Education Amendments of 1972. Representative Patsy T. Mink (Hawaii) was Title IX’s major author and sponsor. After her death in 2002, it was renamed the Patsy T. Mink Equal Opportunity in Education Act. The law prohibits sex-based discrimination in federally-funded schools and educational programs. It also protects against sexual harassment. The law states,

“No person in the United States shall, on the basis of sex, be excluded from participation in, be denied the benefits of, or be subjected to discrimination under any education program or activity receiving federal financial assistance.”

The federal deadline for schools to adjust to the standards of Title IX was 1978. In Ann Arbor, the push for gender equality in sports started even earlier.

Before Title IX, Ann Arbor (like most other towns in the U.S.) did not have women's high school varsity or college sports. But female athletes were playing in recreational leagues and city-sponsored tournaments as early as the 1930s. The Ann Arbor Women’s Golf Association formed in 1931. When the softball boom hit Ann Arbor, local businesses like Edwards Brothers and Pfeiffer Beer sponsored women’s teams.

In the 1950s and 60s, Ann Arbor’s elite female athletes had very few opportunities to compete at an advanced level. They were not allowed to train with their male peers in high school varsity programs, and they were often shut out of boys’ sports leagues. As a result, a few enterprising coaches started competitive clubs for women and girls. These included the Ann Arbor Swim Club and the Michigammes Women’s Running Club.

Rose Mary Dawson, daughter of Matt Mann, founded the Ann Arbor Swim Club with her husband Buck in 1956. She coached the team to six straight state championships in swimming and two national titles in water polo. Ken "Red" Simmons and his wife Betty founded the Michigammes Women’s Running Club in 1960. Betty, a physical education teacher at Slauson Junior High School, recruited the best female runner in the school. Francie Kraker (now Francie Kraker Goodridge) trained with the Michigammes for nearly a decade. She set a world record in the 600-yard indoor event and was the first Michigan-born woman to run for the U.S. National Track and Field team. She competed at the 1968 Mexico City and 1972 Munich Summer Olympic Games. Both Simmons and Kraker Goodridge later coached women’s track at the University of Michigan.

Physical education programs in Ann Arbor Public Schools remained separated by sex until the early 1970s. In terms of athletics, girls could participate in cheerleading, synchronized swimming, or the Girls’ Athletic Club. Intramural sports were the only option. It was not until Elise Harney surveyed female high school students in 1967-68 that the Board of Education decided to allow girls to compete in interscholastic sports. The resolution passed in 1969, and Harney oversaw the development of a growing girls’ sports program. By 1972 the first girls’ varsity teams were competing. By 1974–four years before Title IX’s deadline–all city elementary schools offered co-ed physical education classes.

Interest in girls’ and women’s competitive sports rose sharply in the late 1960s and early 70s. Many girls began playing sports along with their brothers or neighborhood friends. Some joined boys’ teams to compete at the highest level available to them. When league rules or state law barred them from play, they brought their cases to the courts. The passage of Title IX on June 23, 1972 established a legal basis for women and girls’ right to participate in competitive sports. Lawyers began representing female athletes in discrimination cases. Victories in the court of law led to more equal opportunities for women and girls in sports.

Huron High School tennis players Cindy Morris and Emily Barrett were the first female athletes in Michigan to compete on a boys' varsity team. Although they began training with the team in early 1972, they faced opposition from competing teams and the Michigan High School Athletic Association (MHSAA). Finally, a court injunction allowed them to play their first interscholastic varsity match on April 19, 1972.  Huron High School tennis coach Jerry Shull, athletic director Ed Klum, and the Ann Arbor Board of Education supported their bid. The doubles pair beat male opponents in several matches. Later that spring, Michigan passed a state law allowing female athletes to try out for boys' varsity teams in non-contact sports.

The following year in Ypsilanti, twelve-year-old Carolyn King challenged the Little League’s no-girls rule. As a private organization, the Little League was not subject to the protections of Title IX. During tryouts, King outperformed 15 boys for a starting position as centerfielder for the Ypsilanti Orioles. Although the League tried to kick her out, the City of Ypsilanti supported her cause. City Council and Mayor George D. Goodman refused use of city baseball facilities unless the League let King play. She played her first game on May 10, 1973 in front of TV crews and over 1,000 spectators. Although King eventually lost in court, all the media attention spurred the growth of local recreational coed leagues. By 1975 the momentum had shifted and girls nationwide were allowed to play in the Little League.

Another prominent legal case was inspired by nine-year-old wrestler Tricia McNaughton (now Tricia McNaughton Saunders). McNaughton was the only girl among 850 boys to wrestle in a Junior Olympic Amateur Athletic Union tournament at Eastern Michigan University. Her family sued EMU–a public university–for sex discrimination when AAU prohibited her from registering. McNaughton won the right to compete in the tournament, but she would have to wait until the 1990s for the true beginning of women’s wrestling. As an adult, McNaughton won four FILA Wrestling World Championships. She also coached the inaugural 2004 U.S. women’s Olympic wrestling team.

Compared to previous decades, girls’ sports programs in Ann Arbor flourished in the 1970s. A Michigan state law proposed in 1972 supported girls’ right to compete alongside boys on varsity teams in non-contact sports. Elite female athletes often chose to do so. Pioneer High School diver Vicki Kimball, daughter of the University of Michigan men’s diving coach, set a record in the boys’ South Central Conference in 1976. The deadline for compliance with Title IX in 1978 spurred the growth of girls’ varsity programs across the state. However, female athletes who wanted to wrestle or play contact sports like football, soccer, or hockey did not fare as well. It was not until the mid-1980s and late 90s that girls’ varsity soccer and ice hockey teams were founded in Ann Arbor. Varsity-level wrestling and football never gained a foothold.

As was the case in previous decades for softball, golf, swimming, and track, it took the establishment of independent girls’ and women’s leagues for interest to grow in nontraditional sports. In the late 1970s, female soccer players formed the Great Lakes Soccer League. Ann Arbor fielded a 14-and-under team, the Pipers, which was the only traveling girls’ soccer team in the city. Coach Channie Baker led them to an undefeated season in 1983. Just a few years later, Pioneer and Huron High Schools both had varsity girls’ soccer teams and they vied against each other for the Association Cup.

Two local advocates who supported Title IX from the beginning were Marcia Federbush and Jean Ledwith King. In 1971 Federbush published the first study of sex discrimination in a school system in the U.S.--focusing on Ann Arbor’s public schools. She also filed the first Title IX complaint against the University of Michigan in 1973. Attorney King represented female athletes (including wrestler Tricia McNaughton) in sex discrimination cases throughout her career. In 1979 she was Pamela Othen’s attorney, leading to the addition of a girls’ varsity golf team at Pioneer High school. Another case in 2000 forced Huron High School to upgrade facilities for the girls’ varsity softball team. Both women were inducted into the Michigan Women’s Hall of Fame in the late 1980s.

The fight to expand girls’ and women’s sports programs continues decades after Title IX. Ongoing issues locally and nationwide range from securing funding to defining sex-based discrimination. Women’s athletic programs often receive less funding and less desirable schedules and facilities than men’s programs. Another topic of debate is whether Title IX should protect the rights of transgender athletes to compete. Over the past fifty years, local athletes, coaches, and advocates have set a remarkable precedent for supporting gender equality in sports. 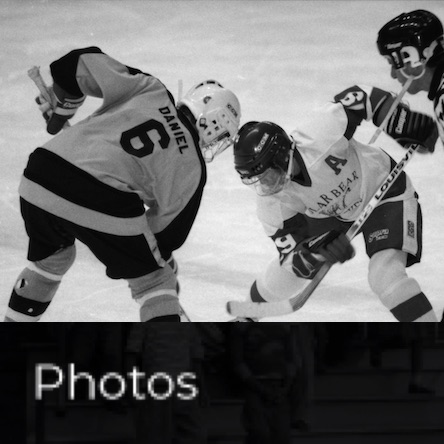 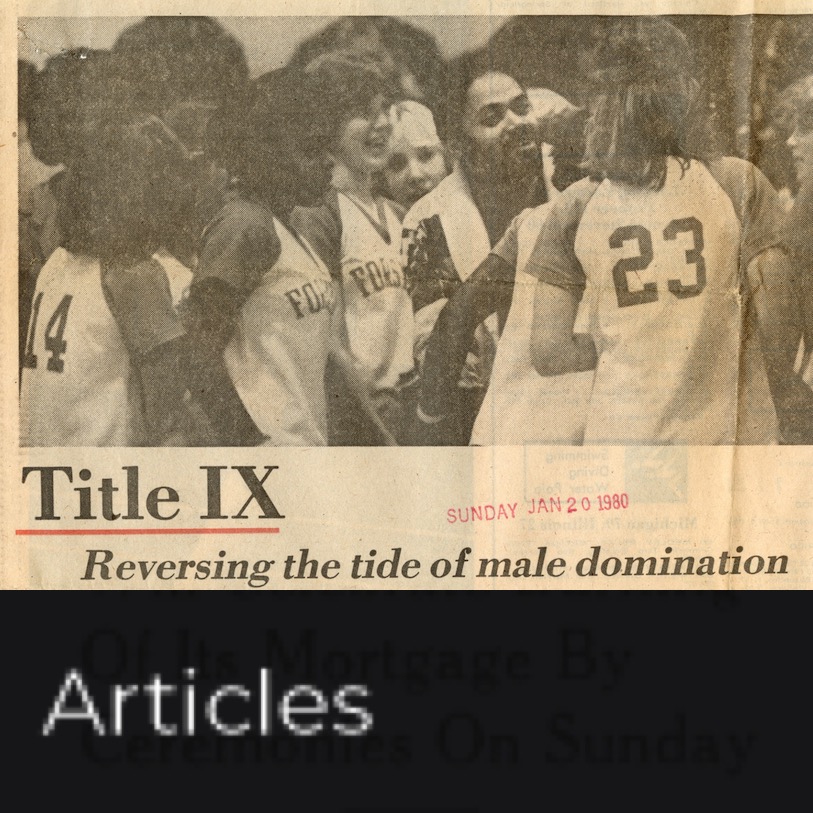