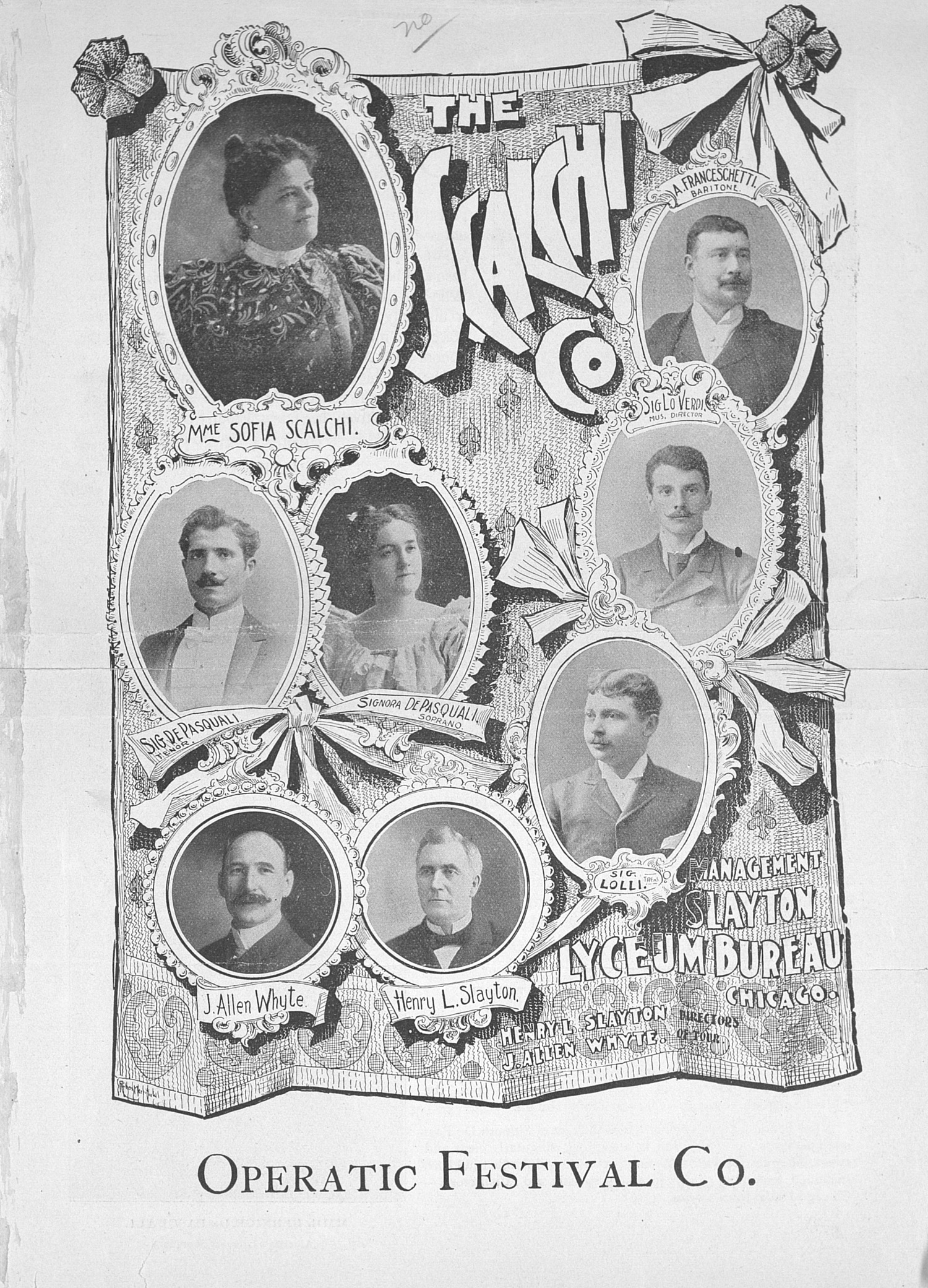 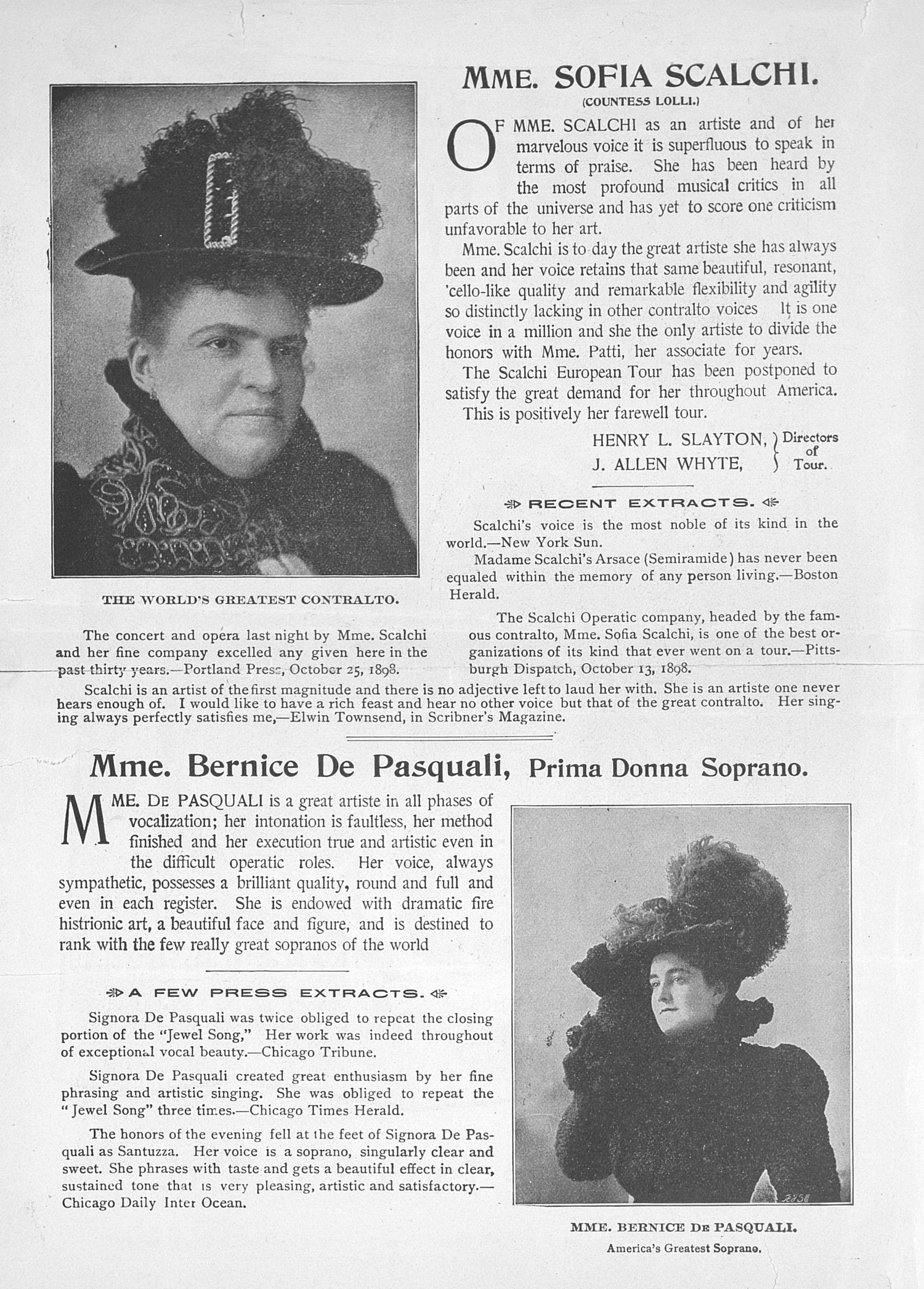 Operatic Festival Co.
MME. SOFIA SCALCHI.
(COUNTESS LOLL1.)
OF MME. SCALCHI as an artiste and of her marvelous voice it is superfluous to speak in terms of praise. She has been heard by the most profound musical critics in all parts of the universe and has yet to score one criticism unfavorable to her art.
Mme. Scalchi is to day the great artiste she has always been and her voice retains that same beautiful, resonant, 'cellolike quality and remarkable flexibility and agility so distinctly lacking in other contralto voices It is one voice in a million and she the only artiste to divide the honors with Mme. Patti, her associate for years.
The Scalchi European Tour has been postponed to satisfy the great demand for her throughout America. This is positively her farewell tour.
HENRY L. SLAYTON,) Directors J. ALLEN WHYTE, ) ToL.
3 RECENT EXTRACTS. g
Scalchi's voice is the most noble of its kind in the world.--New York Sun.
Madame Scalchi's Arsace (Semiramide) has never been equaled within the memory of any person living.--Boston Herald.
THE WOELD'S GREATEST CONTRALTO.
The concert and opera last night by Mine. Scalchi and her fine company excelled any given here in the past thirty years.--Portland Pres;, October 25, 1898.
The Scalchi Operatic company, headed by the fam ous contralto, Mme. Sofia Scalchi, is one of the best or ganizations of its kind that ever went on a tour.--Pitts burgh Dispatch, October 13, 1898.
Scalchi is an artist of the first magnitude and there is no adjective left to laud her with. She is an artiste one never hears enough of. I would like to have a rich feast and hear no other voice but that of the great contralto. Her sing ing always perfectly satisfies me,--Elwin Townsend, in Scribner's Magazine.
Mme. Bernice De Pasquali, Prima Donna Soprano.
M'
ME. De PASQUAL1 is a great artiste in all phases of vocalization; her intonation is faultless, her method finished and her execution true and artistic even in the difficult operatic roles. Her voice, always sympathetic, possesses a brilliant quality, round and full and even in each register. She is endowed with dramatic fire histrionic art, a beautiful face and figure, and is destined to rank with the few really great sopranos of the world
3A FEW PRESS EXTRACTS. K
Signora De Pasquali was twice obliged to repeat the closing portion of the "Jewel Song," Her work was indeed throughout of exceptional vocal beauty.--Chicago Tribune.
Signora De Pasquali created great enthusiasm by her fine phrasing and artistic singing. She was obliged to repeat the "Jewel Song" three times.--Chicago Times Herald.
The honors of the evening fell at (he feet of Signora De Pas quali as Santuzza. Her voice is a soprano, singularly clear and sweet. She phrases with taste and gets a beautiful effect in clear, sustained tone that is very pleasing, artistic and satisfactory.-Chicago Daily Inter Ocean.
MME. BEENICE Be PASQtJALI.
America's Greatest Soprano.