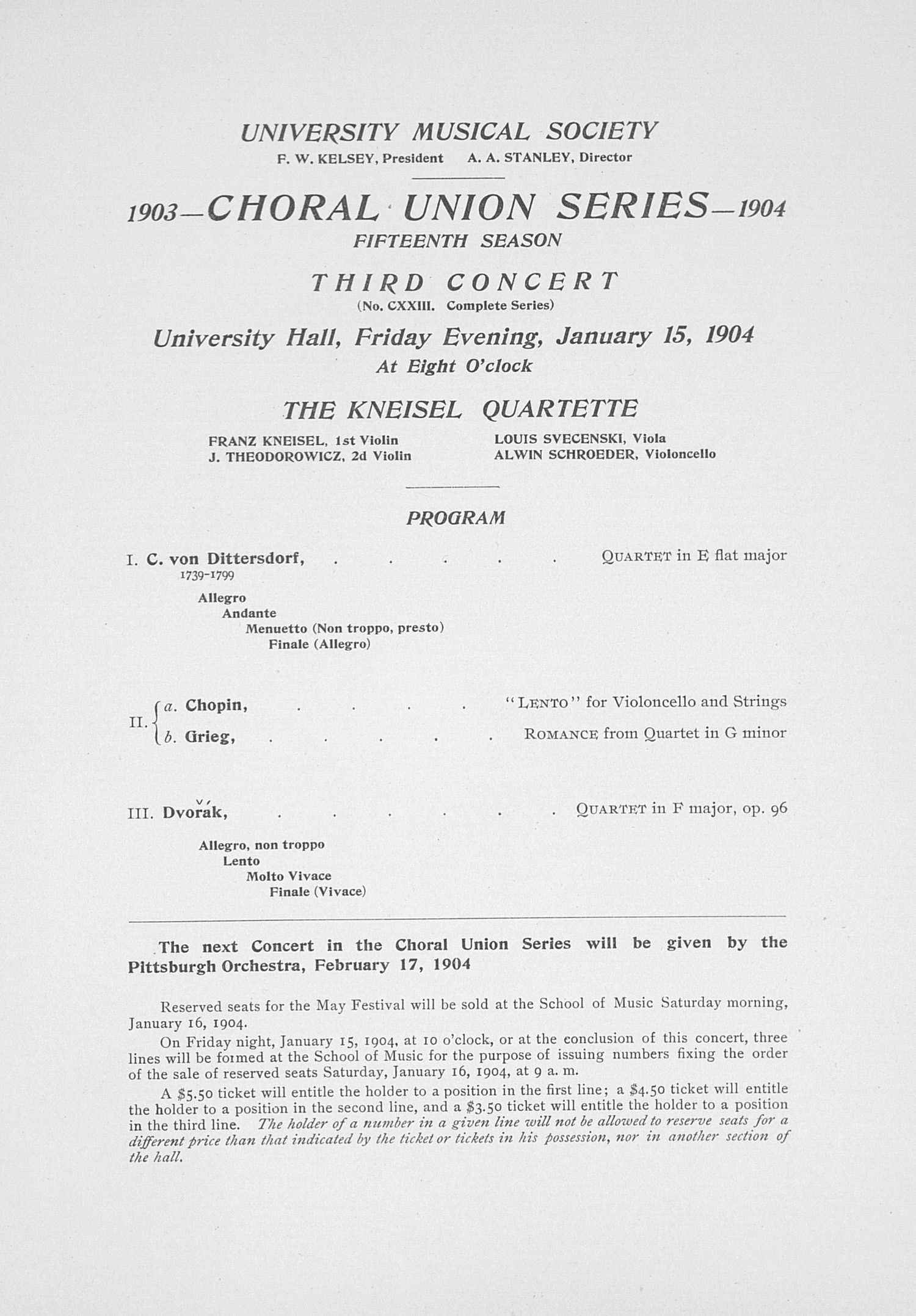 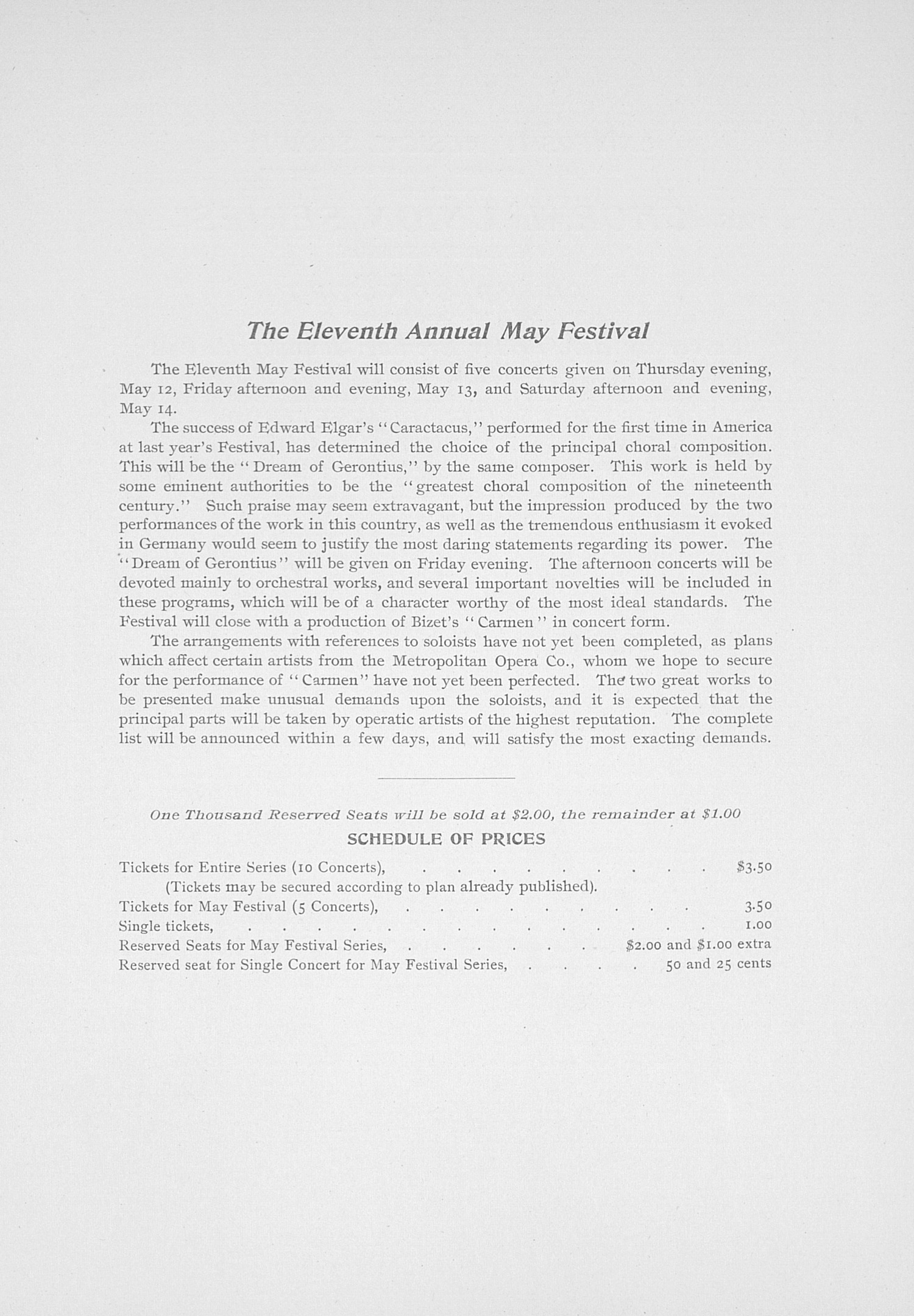 UNIVERSITY MUSICAL SOCIETY
F. W. KELSEY, President A. A. STANLEY, Director
1903-CHORAL UNION SBRIES-1904
FIFTEENTH SEASON
THIRD CONCERT
(No. CXXIII. Complete Series)
University Hall, Friday Evening, January 15, 1904
At Eight O'clock
THE KNEISEL QUARTETTE
FRANZ KNEISEL, 1st Violin J. THEODOROWICZ, 2d Violin
LOUIS SVECENSKI, Viola ALWIN SCHROEDER, Violoncello
PROGRAM
I. C. von Dittersdorf,
1739-1799
Quartet in E flat major
Allegro
Andante
Menuetto (Non troppo, presto) Finale (Allegro)
(a. IIJ U
a. Chopin, Grieg,
" Lento " for Violoncello and Strings Romance from Quartet in G minor
III. Dvorak,
Quartet in F major, op. 96
Allegro, non troppo Lento
Molto Vivace
Finale (Vivace)
The next Concert in the Choral Union Series will be given by the Pittsburgh Orchestra, February 17, 1904
Reserved seats for the May Festival will be sold at the School of Music Saturday morning, January 16, 1904.
On Friday night, January 15, 1904, at 10 o'clock, or at the conclusion of this concert, three lines will be foimed at the School of Music for the purpose of issuing numbers fixing the order of the sale of reserved seats Saturday, January 16, 1904, at 9 a. m.
A $5.50 ticket will entitle the holder to a position in the first line; a $4.50 ticket will entitle the holder to a position in the second line, and a 83.50 ticket will entitle the holder to a position in the third line. The holder of a number in a given line will not be allowed to reserve seals for a different price than that indicated by the ticket or tickets in his possession, nor in another section of the hall.
The Eleventh Annual May Festival
The Eleventh May Festival will consist of five concerts given on Thursday evening, May 12, Friday afternoon and evening, May 13, and Saturday afternoon and evening, May 14.
The success of Edward Elgar's " Caractacus," performed for the first time in America at last year's Festival, has determined the choice of the principal choral composition. This will be the " Dream of Gerontius," by the same composer. This work is held by some eminent authorities to be the '' greatest choral composition of the nineteenth century." Such praise may seem extravagant, but the impression produced by the two performances of the work in this country, as well as the tremendous enthusiasm it evoked in Germany would seem to justify the most daring statements regarding its power. The '' Dream of Gerontius'' will be given on Friday evening. The afternoon concerts will be devoted mainly to orchestral works, and several important novelties will be included in these programs, which will be of a character worthy of the most ideal standards. The Festival will close with a production of Bizet's " Carmen " in concert form.
The arrangements with references to soloists have not yet been completed, as plans which affect certain artists from the Metropolitan Opera Co., whom we hope to secure for the performance of " Carmen" have not yet been perfected. The two great works to be presented make unusual demands upon the soloists, and it is expected that the principal parts will be taken by operatic artists of the highest reputation. The complete list will be announced within a few days, and will satisfy the most exacting demands.
One Thousand Reserved Seats will be sold at $2.00, the remainder at $1.00 SCHEDULE OF PRICES
Tickets for Entire Series (10 Concerts),.........S3.50
(Tickets may be secured according to plan already published).
Tickets for May Festival (5 Concerts).......... 3.50
Single tickets,..............1.00
Reserved Seats for May Festival Series,......Â§2.00 and $1.00 extra
Reserved seat for Single Concert for May Festival Series, .... 50 and 25 cents