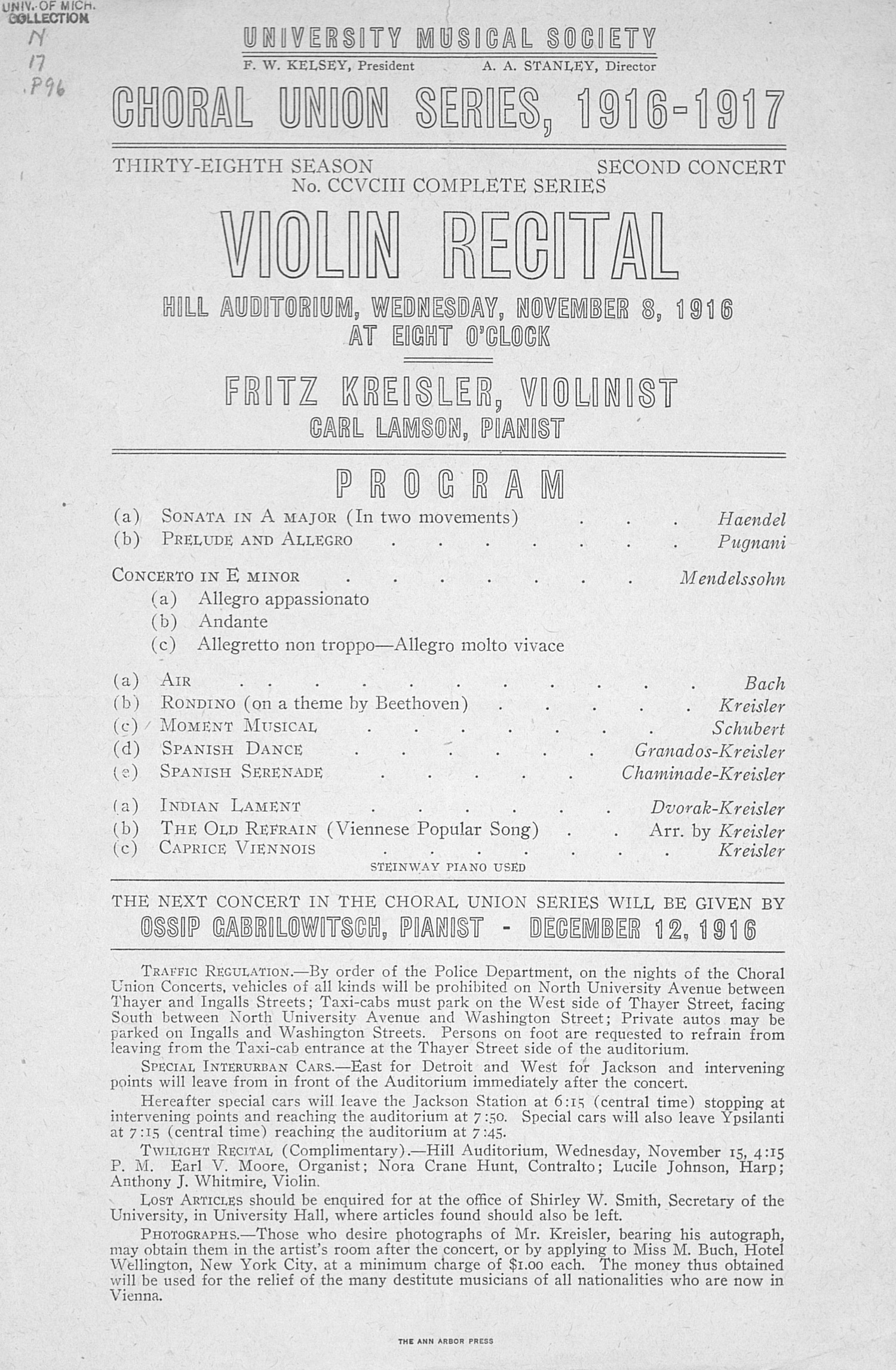 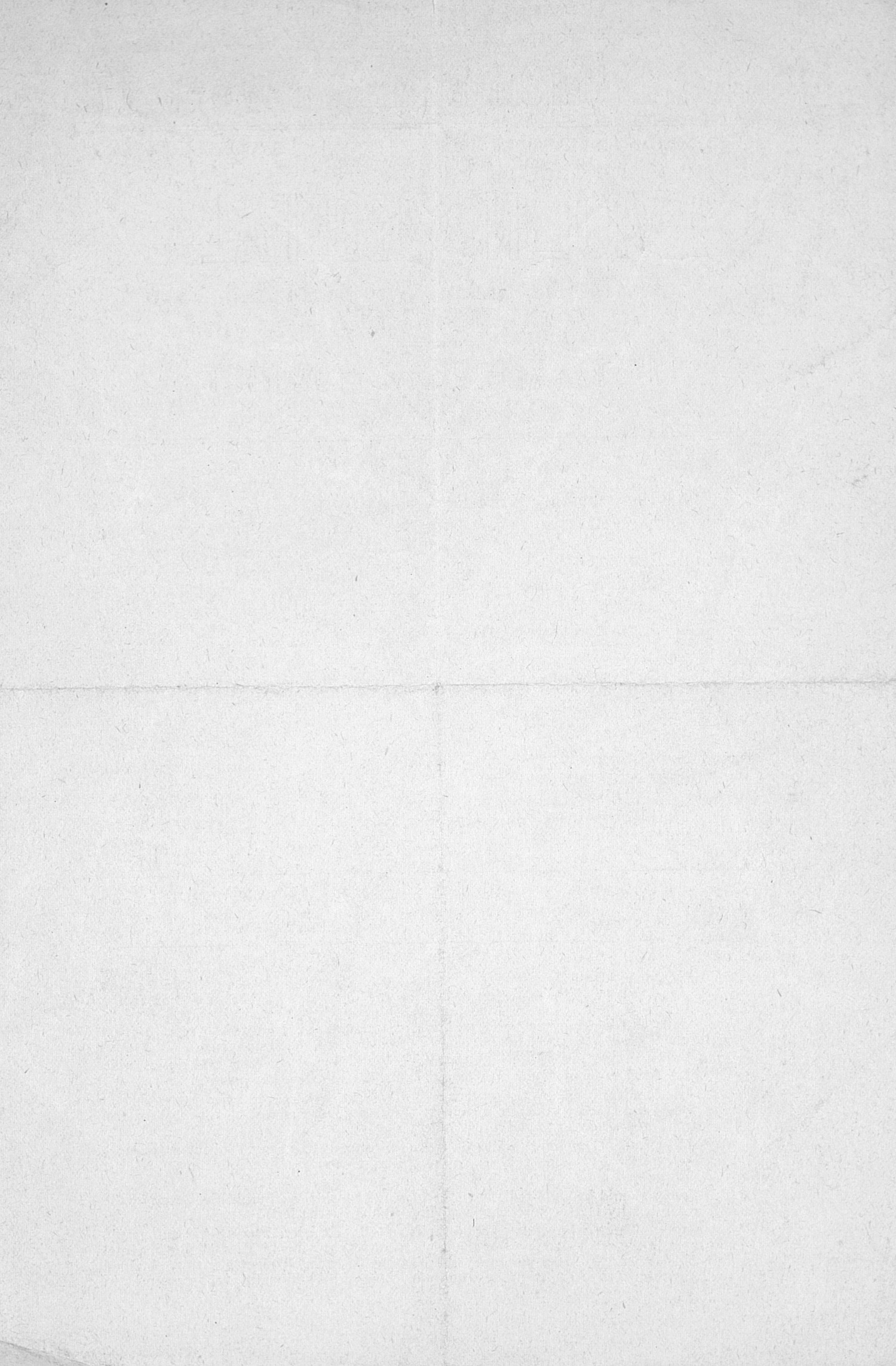 F. W. KELSEY, President
A. A. STANLEY, Director
THIRTY-EIGHTH SEASON SECOND CONCERT
No. CCVCIII COMPLETE SERIES
IP ffi d IS ffi
Haendel Pugnani
Mendelssohn
Bach
Kreisler
Schubert
Granados-Kreisler Chaininade-Kreisler
Dvorak-Kreisler
Arr. by Kreisler
Kreisler
(a) Sonata in A major (In two movements)
(b) Prelude and Allegro ....
Concerto in E minor .....
(a) Allegro appassionato
(b) Andante
(c) Allegretto non troppo--Allegro molto vivace
(a) Air ........
(b) Rondino (on a theme by Beethoven)
(c) ? Moment Musical .....
(d) Spanish Dance . . ' . . () Spanish Serenade ....
(a) Indian Lament .....
(b) The Old Refrain (Viennese Popular Song)
(c) Caprice Viennois ....
STEIN WAY PIANO USED
THE NEXT CONCERT IN THE CHORAL UNION SERIES WILL BE GIVEN BY llp)
Traffic Regulation.--By order of the Police Department, on the nights of the Choral Union Concerts, vehicles of all kinds will be prohibited on North University Avenue between Thayer and Ingalls Streets; Taxi-cabs must park on the West side of Thayer Street, facing South between North University Avenue and Washington Street; Private autos may be parked on Ingalls and Washington Streets. Persons on foot are requested to refrain from leaving from the Taxi-cab entrance at the Thayer Street side of the auditorium.
Special Interurban Cars.--East for Detroit and West for Jackson and intervening points will leave from in front of the Auditorium immediately after the concert.
Hereafter special cars will leave the Jackson Station at 6:15 (central time) stopping at intervening points and reaching the auditorium at 7 150. Special cars will also leave Ypsilanti at 7:15 (central time) reaching the auditorium at 7:45-
Twilight Recital (Complimentary).--Hill Auditorium, Wednesday, November 15, 4:15 P. M. Earl V. Moore, Organist; Nora Crane Hunt, Contralto; Lucile Johnson, Harp; Anthony J. Whitmire, Violin.
Lost Articles should be enquired for at the office of Shirley W. Smith, Secretary of the University, in University Hall, where articles found should also be left.
Photographs.--Those who desire photographs of Mr. Kreisler, bearing his autograph, may obtain them in the artist's room after the concert, or by applying to Miss M. Buch, Hotel Wellington, New York City, at a minimum charge of $1.00 each. The money thus obtained will be used for the relief of the many destitute musicians of all nationalities who are now in Vienna.
THE ANN ARBOR PRESS