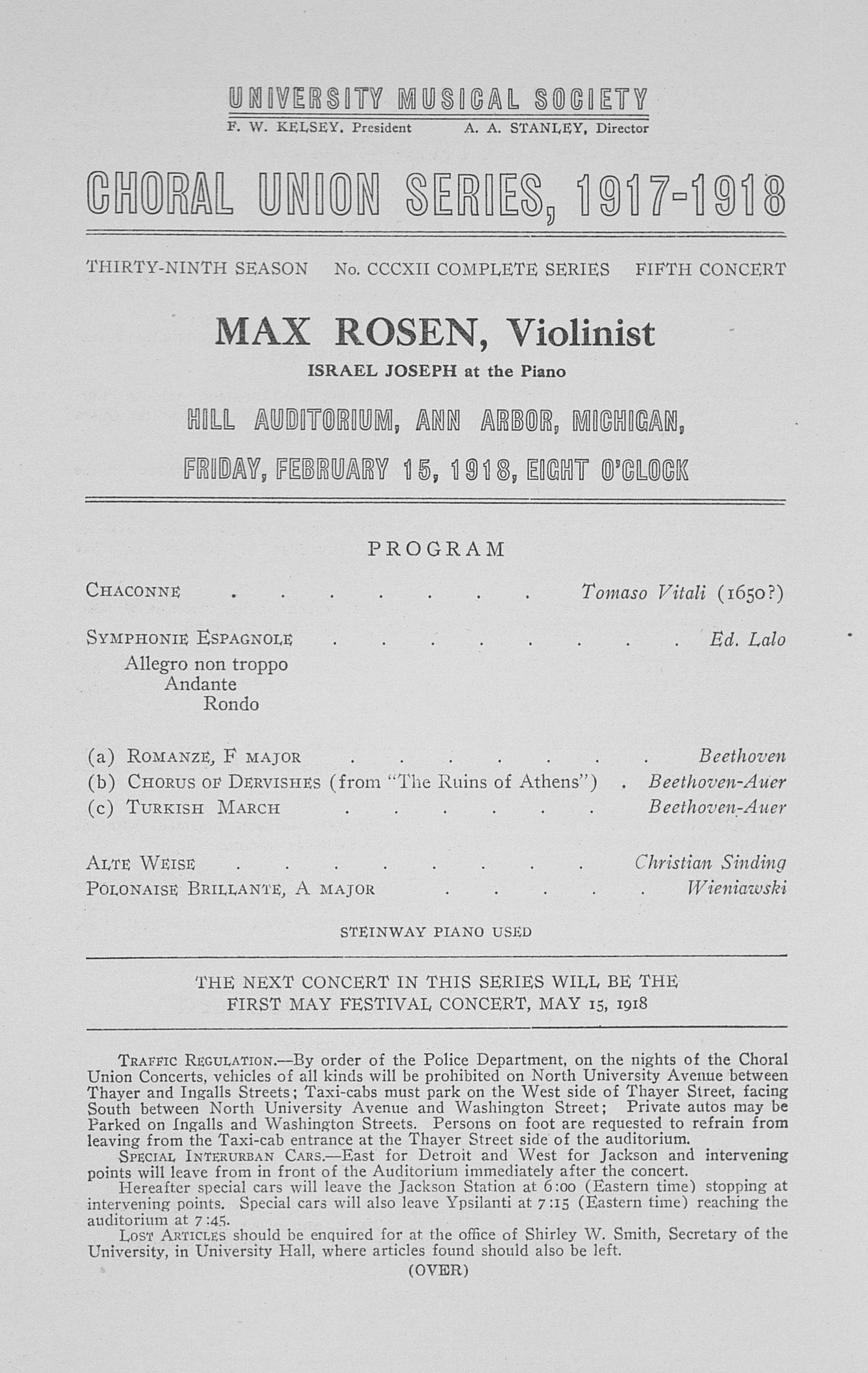 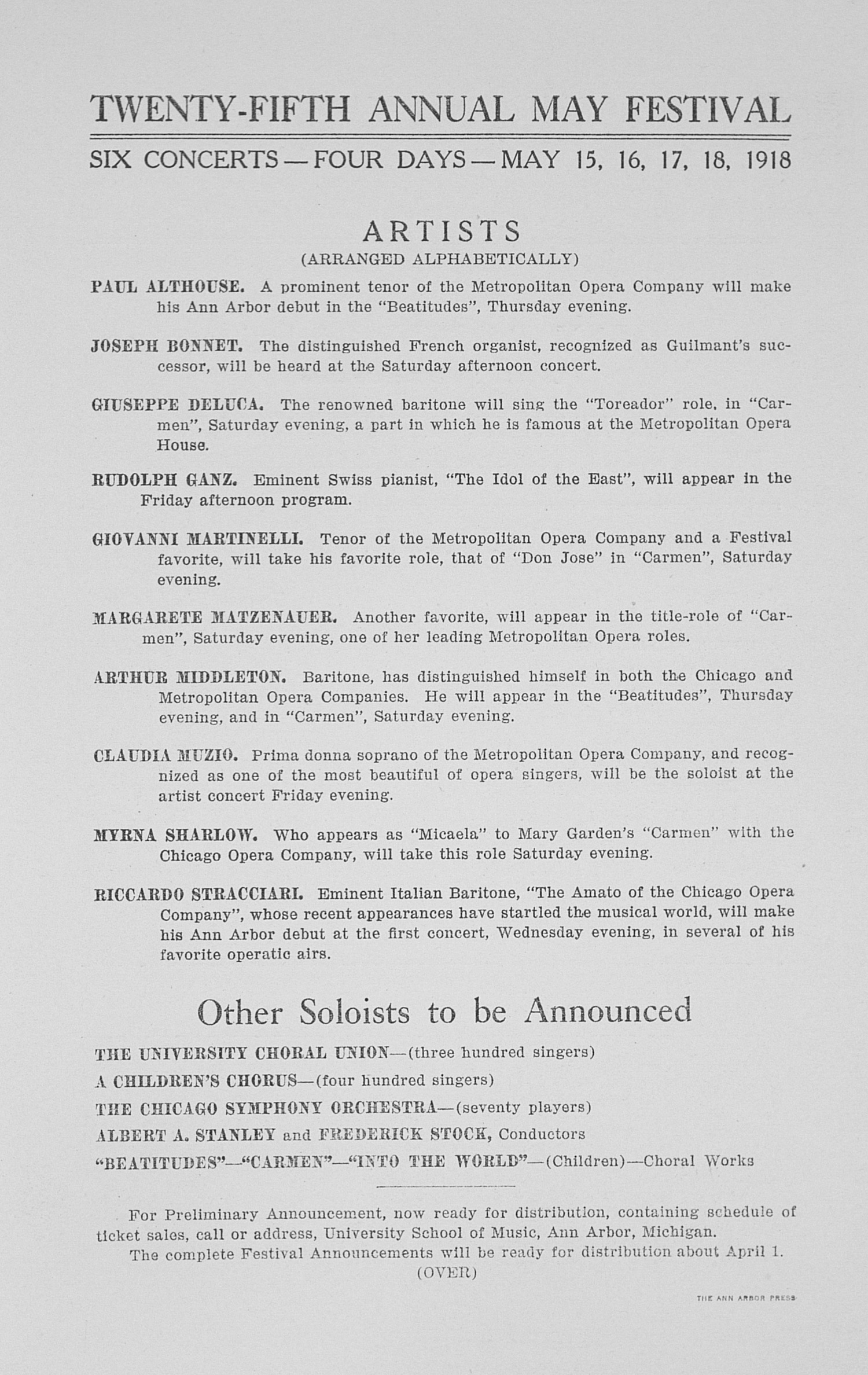 F. W. KELSEY. President
A. A. STANLEY, Director
THIRTY-NINTH SEASON No. CCCXII COMPLETE SERIES FIFTH CONCERT
MAX ROSEN, Violinist
ISRAEL JOSEPH at the Piano
PROGRAM
Chaconne
Symphonie Espagnole Allegro non troppo Andante Rondo
Toinaso Vitali (1650) lid. Lalo
(a) ROMANZE, F MAJOR ......
(b) Chorus at Dervishes (from "The Ruins of Athens")
(c) Turkish March ......
Beethoven Beethoven-Aiier Beethoven-Auer
AirE Weise
Polonaise Briixante, A major
Christian Sinding Wieniawski
STEINWAY PIANO USED
THE NEXT CONCERT IN THIS SERIES WILL BE THE FIRST MAY FESTIVAL CONCERT, MAY is, 1918
Traffic Regulation.--By order of the Police Department, on the nights of the Choral Union Concerts, vehicles of all kinds will be prohibited on North University Avenue between Thayer and Ingalls Streets; Taxi-cabs must park on the West side of Thayer Street, facing South between North University Avenue and Washington Street; Private autos may be Parked on Ingalls and Washington Streets. Persons on foot are requested to refrain from leaving from the Taxi-cab entrance at the Thayer Street side of the auditorium.
Special Interurban Cars.--East for Detroit and West for Jackson and intervening points will leave from in front of the Auditorium immediately after the concert.
Hereafter special cars will leave the Jackson Station at 6:00 (Eastern time) stopping at intervening points. Special cars will also leave Ypsilanti at 7:15 (Eastern time) reaching the auditorium at 7 :45.
Lost Articles should be enquired for at the office of Shirley W. Smith, Secretary of the University, in University Hall, where articles found should also be left.
(OVER)
TWENTY-FIFTH ANNUAL MAY FESTIVAL
SIX CONCERTS --FOUR DAYS --MAY 15, 16, 17, 18, 1918
ARTISTS
(ARRANGED ALPHABETICALLY)
PAUL ALTHOUSE. A prominent tenor of the Metropolitan Opera Company will make his Ann Arbor debut in the "Beatitudes", Thursday evening.
JOSEPH BONNET. The distinguished French organist, recognized as Guilmant's successor, will be heard at the Saturday afternoon concert.
GIUSEPPE DELUCA. The renowned baritone will sing the "Toreador" role, in "Carmen", Saturday evening, a part in which he is famous at the Metropolitan Opera House.
RUDOLPH GANZ. Eminent Swiss pianist, "The Idol of the East", will appear in the Friday afternoon program.
GIOVANNI MAKTBJELLI. Tenor of the Metropolitan Opera Company and a Festival favorite, will take his favorite role, that of "Don Jose" in "Carmen", Saturday evening.
MARGARETE MATZENAUER. Another favorite, will appear in the title-role of "Carmen", Saturday evening, one of her leading Metropolitan Opera roles.
AJBTHUE MIDDLETON. Baritone, has distinguished himself in both the Chicago and Metropolitan Opera Companies. He will appear in the "Beatitudes", Thursday evening, and in "Carmen", Saturday evening.
CLAUDIA MUZIO. Prima donna soprano of the Metropolitan Opera Company, and recognized as one of the most beautiful of opera singers, will be the soloist at the artist concert Friday evening.
MYBNA SHAHLOW. Who appears as "Micaela" to Mary Garden's "Carmen" with the Chicago Opera Company, will take this role Saturday evening.
RICCARDO STRACCIARI. Eminent Italian Baritone, "The Amato of the Chicago Opera Company", whose recent appearances have startled the musical world, will make his Ann Arbor debut at the first concert, Wednesday evening, in several of his favorite operatic airs.
Other Soloists to be Announced
THE UNIVERSITY CHORAL UNION--(three hundred singers)
A CHILDREN'S CHORUS--(four hundred singers)
THE CHICAGO SYMPHONY ORCHESTRA--(seventy players)
ALBERT A. STANLEY and FREDERICK STOCK, Conductors
"BEATITUDES"--"CARMEN"--"INTO THE WORLD"--(Children)--Choral Works
For Preliminary Announcement, now ready for distribution, containing schedule of ticket sales, call or address, University School of Music, Ann Arbor, Michigan.
The complete Festival Announcements will be ready for distribution about April 1.
(OVER)
ARBOR PflEf-