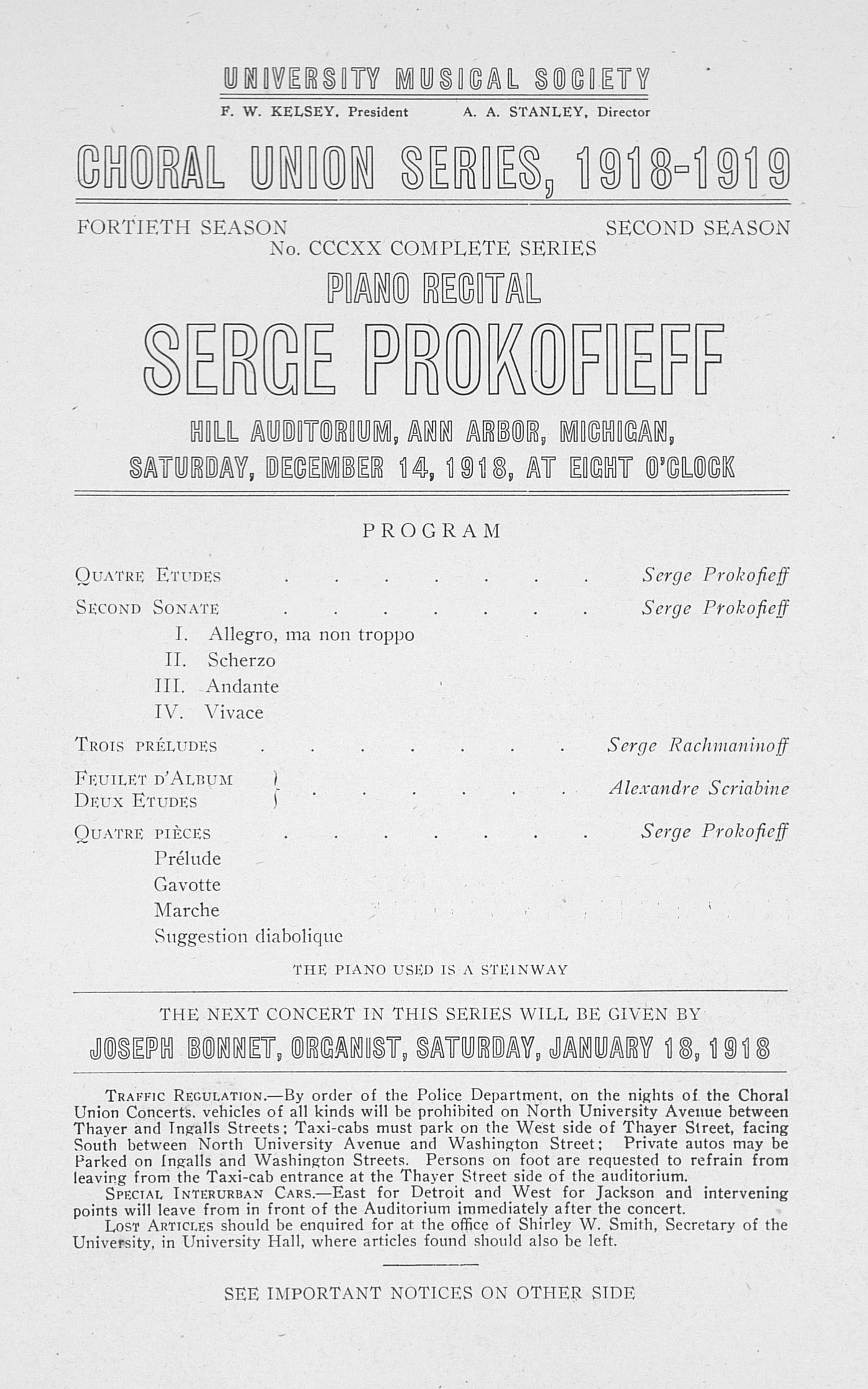 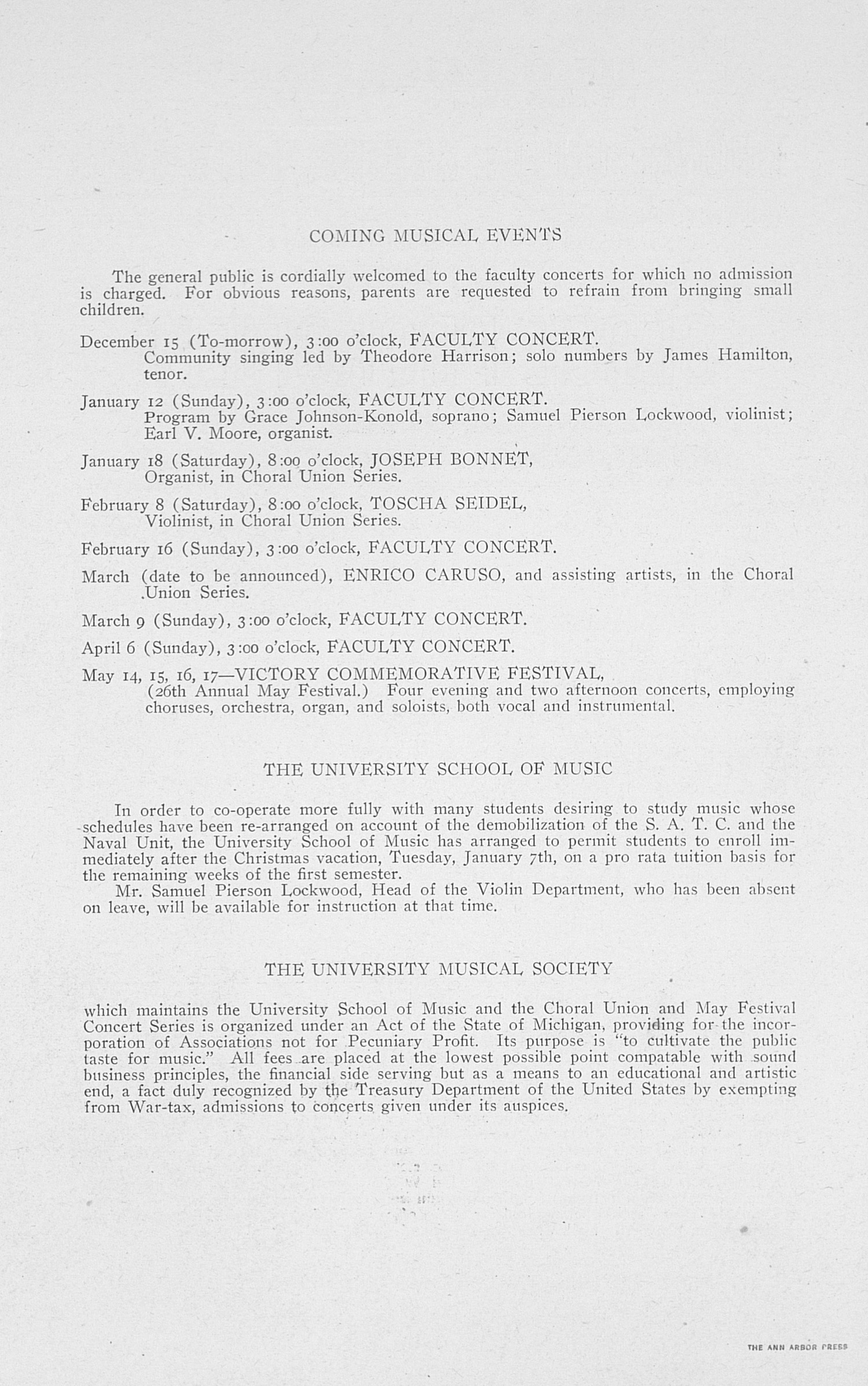 KSflETV
F. W. KELSEY. President A. A. STANLEY, Director
FORTIETH SEASON SECOND SEASON
No. CCCXX COMPLETE SERIES
PROGRAM
Ouatre Etudes
Second Sonate
I. Allegro, ma non troppo II. Scherzo
III. Andante
IV. Vivace
Trois preludes ....
Feuilet d'Album )
Deux Etudes ' ' '.
Ouatre pieces Prelude Gavotte Marche Suggestion diaboliquc
Serge Prokofieff Serge Prokofieff
Serge Rachmaninoff
Alexandre Scriabine
Serge Prokofieff
THE PIANO USED IS A STlilNWAY
THE NEXT CONCERT IN THIS SERIES WILL BE GIVEN BY
Traffic Regulation.--By order of the Police Department, on the nights of the Choral Union Concerts, vehicles of all kinds will be prohibited on North University Avenue between Thayer and Tngails Streets: Taxi-cabs must park on the West side of Thayer Street, facing South between North University Avenue and Washington Street: Private autos may be Parked on Installs and Washington Streets. Persons on foot are requested to refrain from leaving from the Taxi-cab entrance at the Thayer Street side of the auditorium.
Special Interurban Cars.--East for Detroit and West for Jackson and intervening points will leave from in front of the Auditorium immediately after the concert.
Lost Articles should be enquired for at the office of Shirley W. Smith, Secretary of the University, in University Hall, where articles found should also be left.
SEE IMPORTANT NOTICES ON OTHER SIDE
COMING MUSICAL EVENTS
The general public is cordially welcomed to the faculty concerts for which no admission is charged. For obvious reasons, parents are requested to refrain from bringing small children.
December 15 (To-morrow), 3:00 o'clock, FACULTY CONCERT.
Community singing led by Theodore Harrison; solo numbers by James Hamilton, tenor.
January 12 (Sunday), 3:00 o'clock, FACULTY CONCERT.
Program by Grace Johnson-Konold, soprano; Samuel Pierson Lockwood, violinist; Earl V. Moore, organist.
January 18 (Saturday), 8:00 o'clock, JOSEPH BONNET, Organist, in Choral Union Series.
February 8 (Saturday), 8:00 o'clock, TOSCHA SEIDEL, Violinist, in Choral Union Series.
February 16 (Sunday), 3:00 o'clock, FACULTY CONCERT.
March (date to be announced), ENRICO CARUSO, and assisting artists, in the Choral .Union Series.
March 9 (Sunday), 3:00 o'clock, FACULTY CONCERT. April 6 (Sunday), 3:00 o'clock, FACULTY CONCERT.
May 14, is, 16, 17--VICTORY COMMEMORATIVE FESTIVAL,
(26th Annual May Festival.) Four evening and two afternoon concerts, employing; choruses, orchestra, organ, and soloists, both vocal and instrumental.
THE UNIVERSITY SCHOOL OF MUSIC
In order to co-operate more fully with many students desiring to study music whose -schedules have been re-arranged on account of the demobilization of the S. A. T. C. and the Naval Unit, the University School of Music has arranged to permit students to enroll immediately after the Christmas vacation, Tuesday, January 7th, on a pro rata tuition basis for the remaining weeks of the first semester.
Mr. Samuel Pierson Lockwood, Head of the Violin Department, who has been absent on leave, will be available for instruction at that time.
THE UNIVERSITY MUSICAL SOCIETY
which maintains the University School of Music and the Choral Union and May Festival Concert Series is organized under an Act of the State of Michigan, providing for the incorporation of Associations not for Pecuniary Profit. Its purpose is "to cultivate the public taste for music." All fees are placed at the lowest possible point computable with sound business principles, the financial side serving but as a means to an educational and artistic end, a fact duly recognized by the Treasury Department of the United States by exempting from War-tax, admissions to concerts given under its auspices.
THE ANN ARBOR TREES