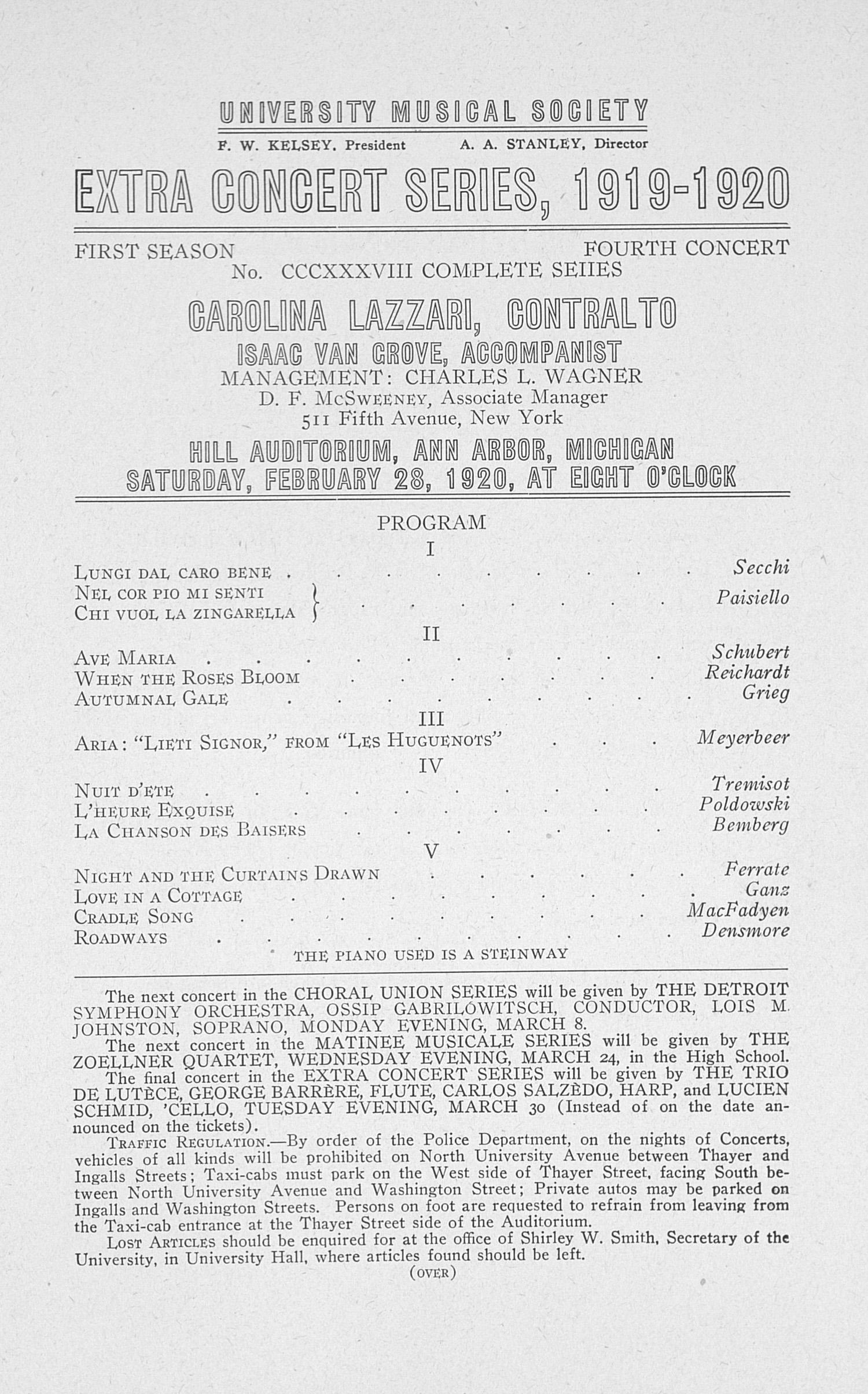 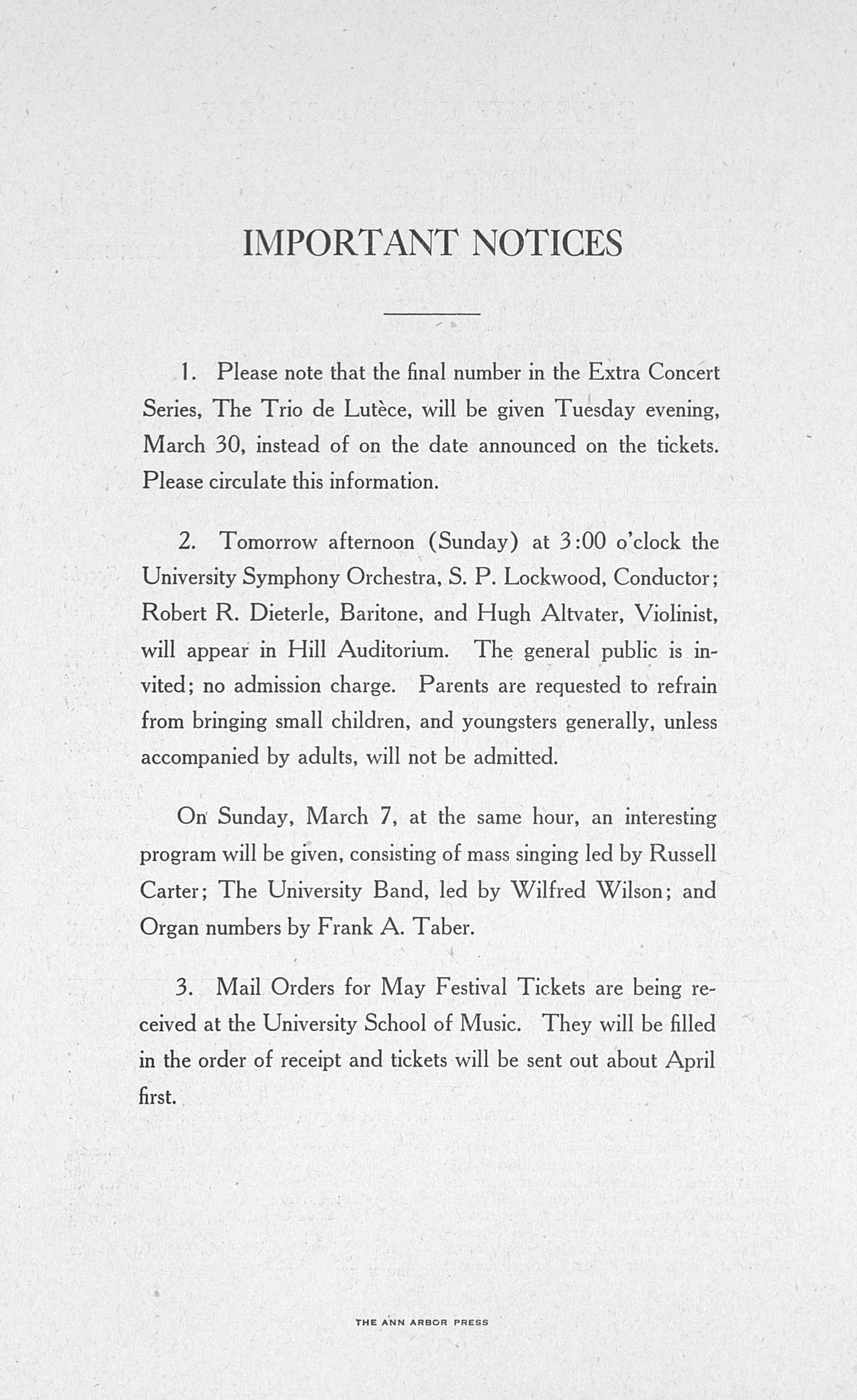 F. W. KELSEY. President
A. A. STANLEY, Director
FIRST SEASON
FOURTH CONCERT
No. CCCXXXVIII COMPLETE SEIIES
,IHfi)H Kill KlhllM
T
MANAGEMENT: CHARLES L. WAGNER
D. F. McSweeney, Associate Manager
511 Fifth Avenue, New York
lungi dal caro bene . Nel cor pio mi senti ) Chi vuol la zingarella j
AvE Maria
When the Roses Bloom
Autumnal Gale
PROGRAM I
II
III
Aria : "Lieti Signor," from "Les Huguenots"
IV
Nurr d'ete........
L'heure Exquise ......
La Chanson des BaisErs . . . ...
V Night and the Curtains Drawn
Love in a Cottage......
Cradle Song . . .
Roadways ........
' the piano used is a steinway
Secchi Paisiello
Schubert
Reichardt
Grieg
Meyerbeer
Tremisot
Poldowski
Bemberg
Ferrate Ganz
MacFadyen Densmore
The next concert in the CHORAL UNION SERIES will be given by THE DETROIT SYMPHONY ORCHESTRA, OSSIP GABRILOWITSCH, CONDUCTOR, LOIS M. JOHNSTON, SOPRANO, MONDAY EVENING, MARCH 8.
The next concert in the MATINEE MUSICALE SERIES will be given by THE ZOELLNER QUARTET, WEDNESDAY EVENING, MARCH 24, in the High School.
The final concert in the EXTRA CONCERT SERIES will be given by THE TRIO DE LUTfiCE, GEORGE BARRfiRE, FLUTE, CARLOS SALZfiDO, HARP, and LUCIEN SCHMID, 'CELLO, TUESDAY EVENING, MARCH 30 (Instead of on the date announced on the tickets).
Traffic Regulation.--By order of the Police Department, on the nights of Concerts, vehicles of all kinds will be prohibited on North University Avenue between Thayer and Ingalls Streets; Taxi-cabs must park on the West side of Thayer Street, facing South between North University Avenue and Washington Street; Private autos may be parked on Ingalls and Washington Streets. Persons on foot are requested to refrain from leaving from the Taxi-cab entrance at the Thayer Street side of the Auditorium.
Lost Articles should be enquired for at the office of Shirley W. Smith, Secretary of the University, in University Hall, where articles found should be left.
(over)
IMPORTANT NOTICES
1. Please note that the final number in the Extra Concert Series, The Trio de Lutece, will be given Tuesday evening, March 30, instead of on the date announced on the tickets. Please circulate this information.
2. Tomorrow afternoon (Sunday) at 3:00 o'clock the University Symphony Orchestra, S. P. Lockwood, Conductor; Robert R. Dieterle, Baritone, and Hugh Altvater, Violinist, will appear in Hill Auditorium. The general public is invited; no admission charge. Parents are requested to refrain from bringing small children, and youngsters generally, unless accompanied by adults, will not be admitted.
On Sunday, March 7, at the same hour, an interesting program will be given, consisting of mass singing led by Russell Carter; The University Band, led by Wilfred Wilson; and Organ numbers by Frank A. Taber.
3. Mail Orders for May Festival Tickets are being received at the University School of Music. They will be filled in the order of receipt and tickets will be sent out about April first.