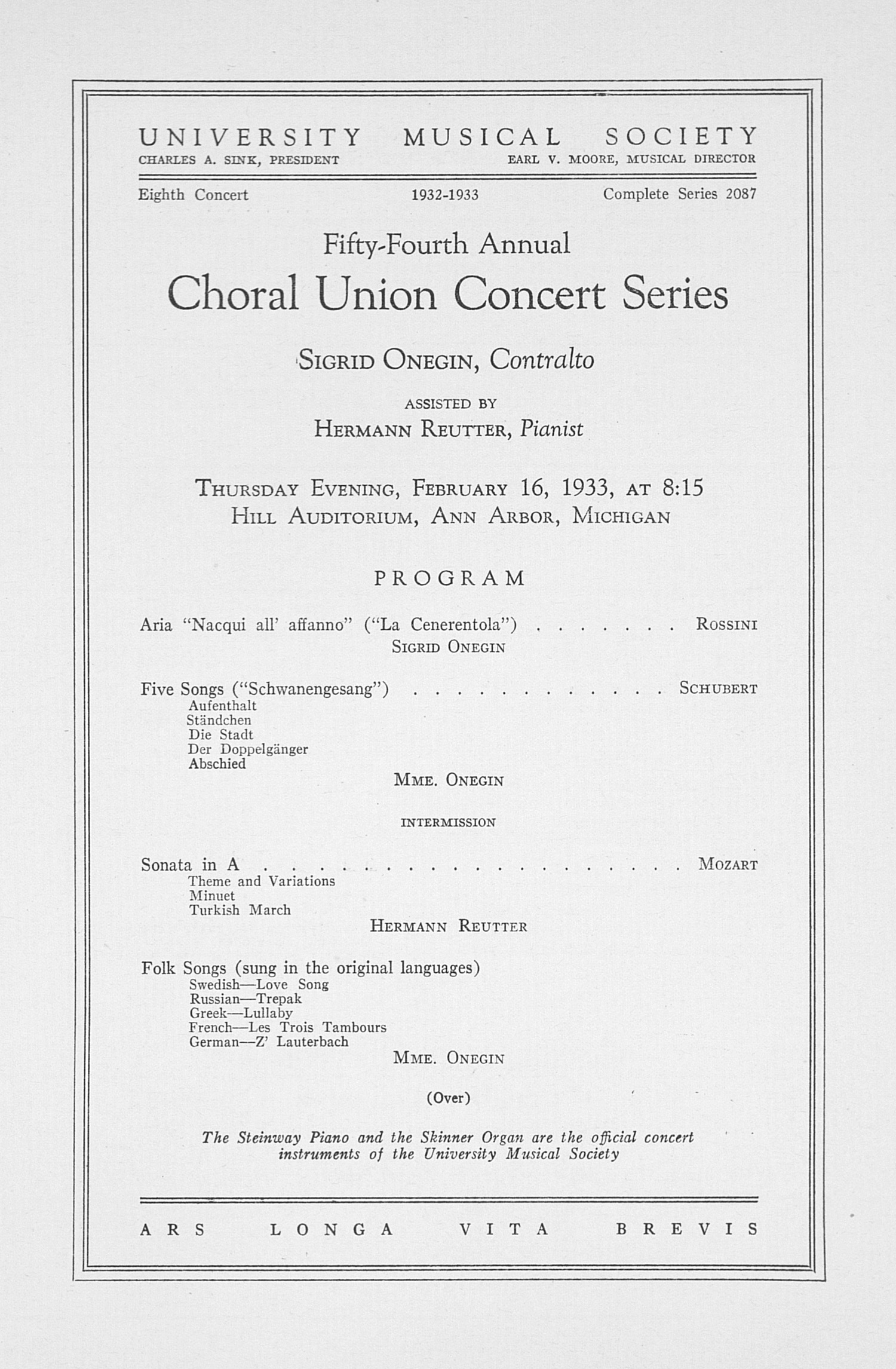 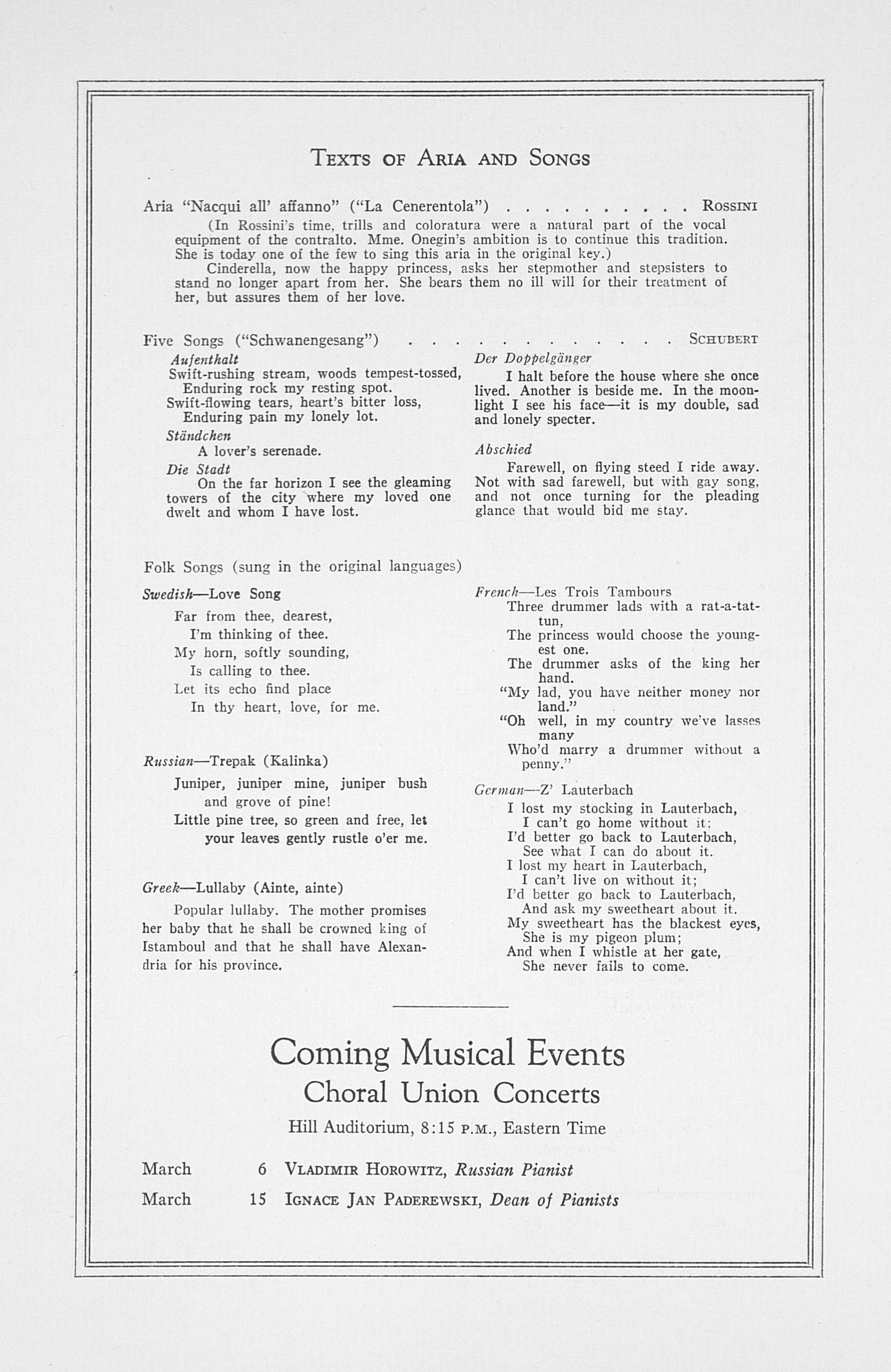 UNIVERSITY MUSICAL SOCIETY
CHARLES A. SINK, PRESIDENT EARL V. MOORE, MUSICAL DIRECTOR
Eighth Concert 1932-1933 Complete Series 2087
Fifty-Fourth Annual
Choral Union Concert Series
Â¦Sigrid Onegin, Contralto
ASSISTED BY
Hermann Reutter, Pianist
Thursday Evening, February 16, 1933, at 8:15 Hill Auditorium, Ann Arbor, Michigan
PROGRAM
Aria "Nacqui all' affanno" ("La Cenerentola") ,......Rossini
Sigrid Onegin
Five Songs ("Schwanengesang")............Schubert
Aufenthalt
Standchen
Die Stadt
Der Doppelganger
Abschied
Mme. Onegin
intermission
Sonata in A................... Mozart
Theme and Variations
Minuet
Turkish March
Hermann Reutter
Folk Songs (sung in the original languages) Swedish--Love Song Russian--Trepak Greek--Lullaby French--Les Trois Tambours German--Z' Lauterbach
Mme. Onegin
(Over)
The Steinway Piano and the Skinner Organ are the official concert instruments of the University Musical Society
ARS LONGA VITA BREVIS
Texts of Aria and Songs
Aria "Nacqui all' affanno" ("La Cenerentola")..........Rossini
(In Rossini's time, trills and coloratura were a natural part of the vocal equipment of the contralto. Mme. Onegin's ambition is to continue this tradition. She is today one of the few to sing this aria in the original key.)
Cinderella, now the happy princess, asks her stepmother and stepsisters to stand no longer apart from her. She bears them no ill will for their treatment of her, but assures them of her love.
Five Songs ("Schwanengesang") . . .
Aujenthalt
Swift-rushing stream, woods tempest-tossed,
Enduring rock my resting spot. Swift-flowing tears, heart's bitter loss,
Enduring pain my lonely lot. Stiindchen
A lover's serenade.
Die Stadt
On the far horizon I see the gleaming towers of the city where my loved one dwelt and whom I have lost.
.........Schubert
Dcr Doppelganger
I halt before the house where she once lived. Another is beside me. In the moonlight I see his face--it is my double, sad and lonely specter.
Abschied
Farewell, on flying steed I ride away. Not with sad farewell, but with gay song, and not once turning for the pleading glance that would bid me stay.
Folk Songs (sung in the original languages)
Swedish--Love Song
Far from thee, dearest,
I'm thinking of thee. My horn, softly sounding,
Is calling to thee. Let its echo find place
In thy heart, love, for me.
Russian--Trepak (Kalinka)
Juniper, juniper mine, juniper bush
and grove of pine! Little pine tree, so green and free, let
your leaves gently rustle o'er me.
Greek--Lullaby (Ainte, ainte)
Popular lullaby. The mother promises her baby that he shall be crowned king of Istamboul and that he shall have Alexandria for his province.
French--Les Trois Tambours
Three drummer lads with a rat-a-tattun,
The princess would choose the youngest one. The drummer asks of the king her
hand. "My lad, you have neither money nor
land." "Oh well, in my country we've lasses
many
Who'd marry a drummer without a penny.1'
German--Z' Lauterbach
I lost my stocking in Lauterbach,
I can't go home without it: I'd better go back to Lauterbach,
See what I can do about it. I lost my heart in Lauterbach,
I can't live on without it; I'd better go back to Lauterbach,
And ask my sweetheart about it. My sweetheart has the blackest eyes,
She is my pigeon plum; And when I whistle at her gate,
She never fails to come.
Coming Musical Events
Choral Union Concerts
Hill Auditorium, 8:IS p.m., Eastern Time
March 6 Vladimir Horowitz, Russian Pianist
March IS Ignace Jan Paderewski, Dean of Pianists