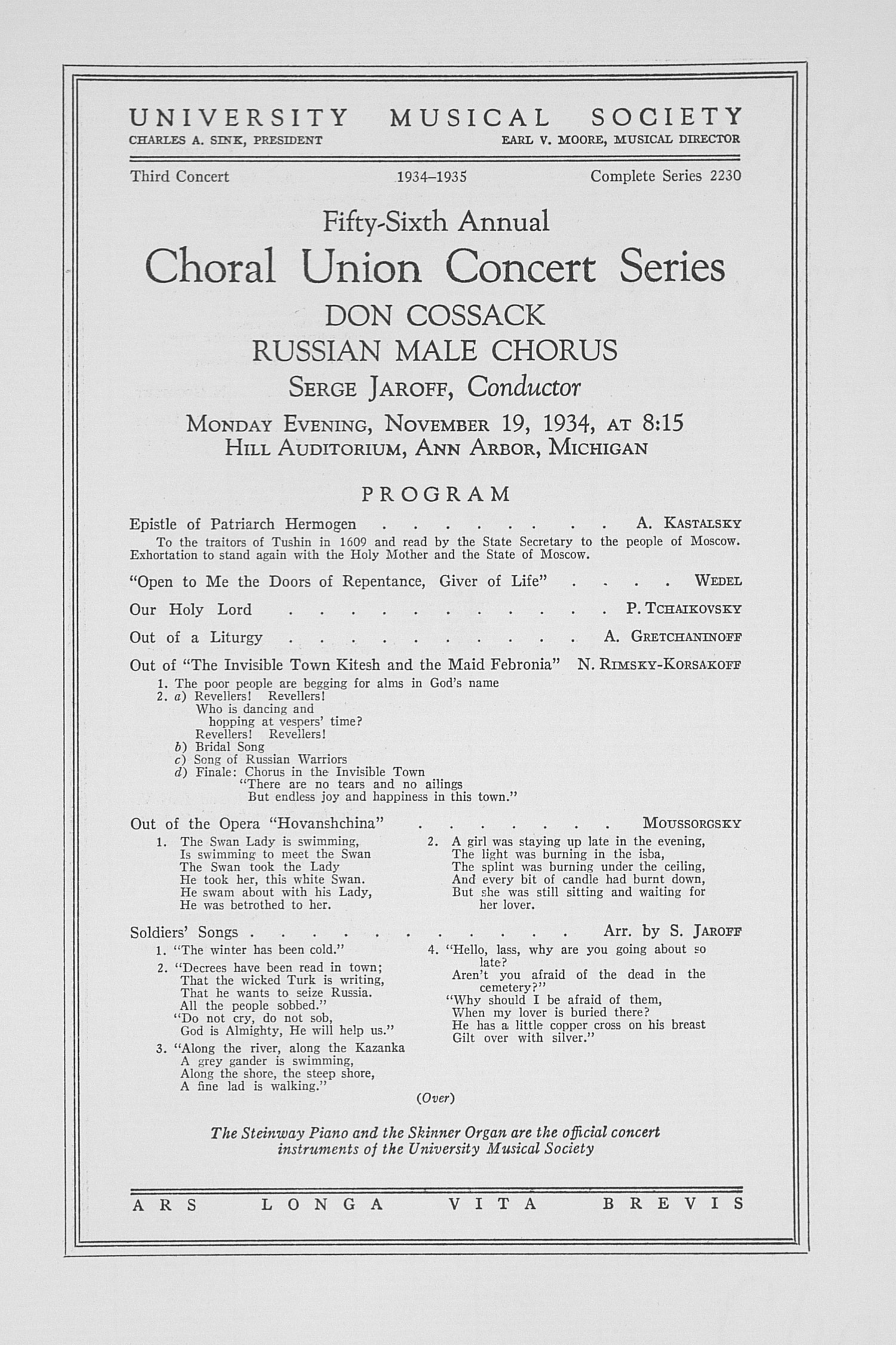 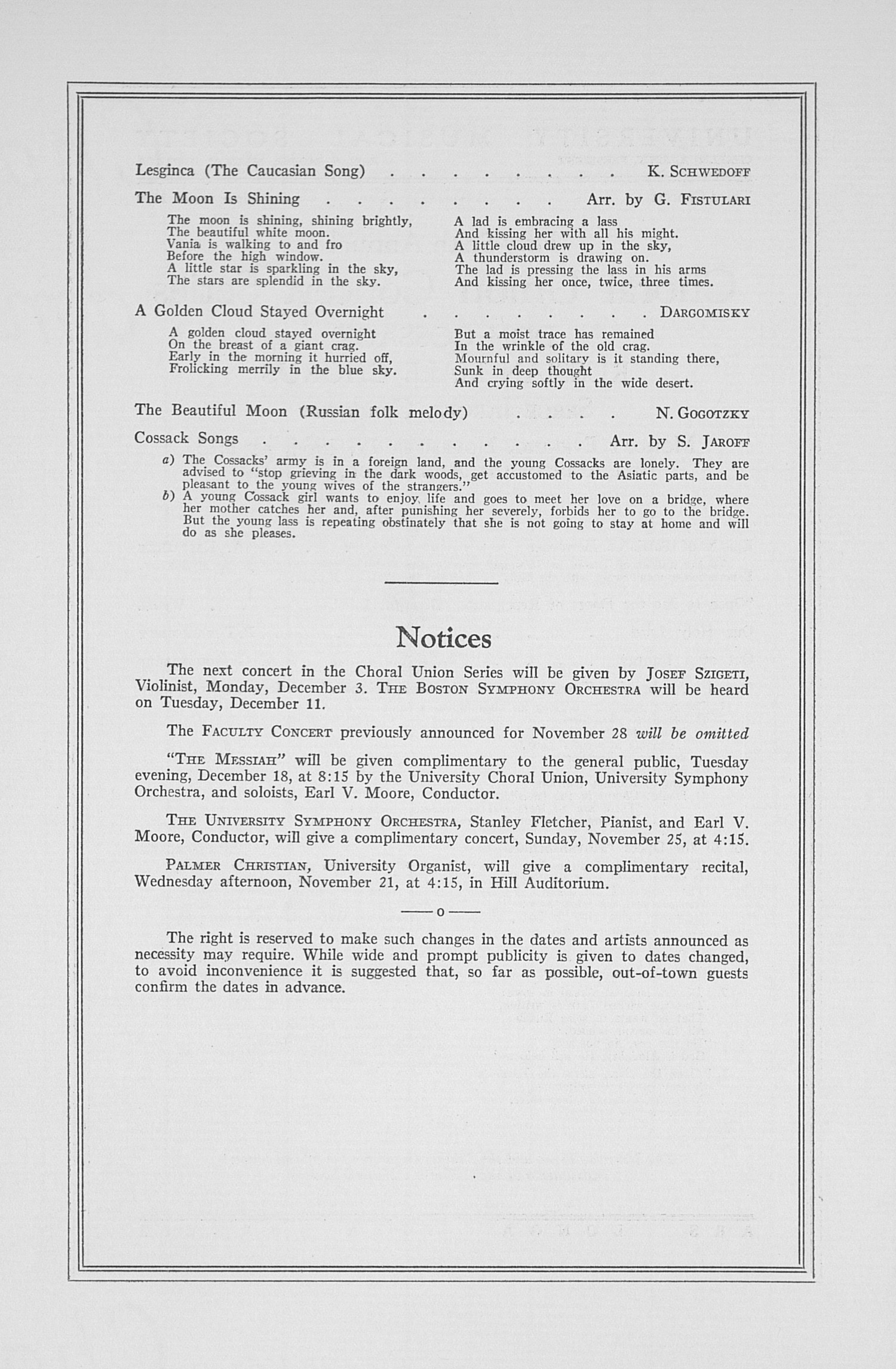 UNIVERSITY MUSICAL SOCIETY
CHARLES A. SINK, PRESIDENT EARL V. MOORE, MUSICAL DIRECTOR
Third Concert 1934-1935 Complete Series 2230
Fifty-Sixth Annual
Choral Union Concert Series
DON COSSACK
RUSSIAN MALE CHORUS
Serge Jaroff, Conductor
Monday Evening, November 19, 1934, at 8:15 Hill Auditorium, Ann Arbor, Michigan
PROGRAM
Epistle of Patriarch Hermogen........A. Kastalsky
To the traitors of Tushin in 1609 and read by the State Secretary to the people of Moscow. Exhortation to stand again with the Holy Mother and the State of Moscow.
"Open to Me the Doors of Repentance, Giver of Life" .... Wedel
Our Holy Lord...........P. Tchaikovsky
Out of a Liturgy..........A. Gretchantnoit
Out of "The Invisible Town Kitesh and the Maid Febronia" N. Rimsky-Korsakoit
1. The poor people are begging for alms in God's name
2. a) Revellers! Revellers 1
Who is dancing and
hopping at vespers' time Revellers! Revellers! A) Bridal Song
c) Seng of Russian Warriors
d) Finale: Chorus in the Invisible Town
"There are no tears and no ailings But endless joy and happiness in this town."
Out of the Opera "Hovanshchina".......Mottssorgsky
I he bwan Lady is swimming, Is swimming to meet the Swan The Swan took the Lady He took her, this white Swan. He swam about with his Lady, He was betrothed to her.
A girl was staying up late in the evening, The light was burning in the isba, The splint was burning under the ceiling, And every bit of candle had burnt down, But she was still sitting and waiting for her lover.
Soldiers' Songs...........Arr. by S. Jaroit
1. "The winter has been cold."
2. "Decrees have been read in town;
That the wicked Turk is writing, That he wants to seize Russia. All the people sobbed." "Do not cry, do not sob, God is Almighty, He will help us."
3. "Along the river, along the Kazanka
A grey gander is swimming, Along the shore, the steep shore, A fine lad is walking."
"Hello, lass, why are you going about so
late Aren't you afraid of the dead in the
cemetery"
"Why should I be afraid of them, When my lover is buried there He has a little copper cross on his breast Gilt over with silver."
(Over)
The Steinway Piano and the Skinner Organ are the official concert instruments of the University Musical Society
A R S LONGA VITA BREVIS
Lesginca (The Caucasian Song)........K. Schwedoff
The Moon Is Shining........Arr. by G. Fistuxari
The moon is shining, shining brightly,
The beautiful white moon.
Vania is walking to and fro
Before the high window.
A little star is sparkling in the sky,
The stars are splendid In the sky.
A lad is embracing a lass
And kissing her with all his might.
A little cloud drew up in the sky,
A thunderstorm is drawing on.
The lad is pressing the lass in his arms
And kissing her once, twice, three times.
A Golden Cloud Staved Overnieht........Dargomisky
A golden cloud stayed overnight On the breast of a giant crag. Early in the morning it hurried off, Frolicking merrily in the blue sky.
But a moist trace has remained
In the wrinkle of the old crag.
Mournful and solitary is it standing there,
Sunk in deep thought
And crying softly in the wide desert.
The Beautiful Moon (Russian folk melody) .... N. Gogotzky
Cossack Songs...........Arr. by S. Jarofe
a) The Cossacks' army is in a foreign land, and the young Cossacks are lonely. They are advised to "stop grieving in the dark woods, get accustomed to the Asiatic parts, and be pleasant to the young wives of the strangers."
b) A young Cossack girl wants to enjoy, life and goes to meet her love on a bridge, where her mother catches her and, after punishing her severely, forbids her to go to the bridge. But the young lass is repeating obstinately that she is not going to stay at home and will do as she pleases.
Notices
The next concert in the Choral Union Series will be given by Josef Szigeti, Violinist, Monday, December 3. The Boston Symphony Orchestra will be heard on Tuesday, December 11.
The Faculty Concert previously announced for November 28 will be omitted
"The Messiah" will be given complimentary to the general public, Tuesday evening, December 18, at 8:15 by the University Choral Union, University Symphony Orchestra, and soloists, Earl V. Moore, Conductor.
The University Symphony Orchestra, Stanley Fletcher, Pianist, and Earl V. Moore, Conductor, will give a complimentary concert, Sunday, November 25, at 4:15.
Palmer Christian, University Organist, will give a complimentary recital, Wednesday afternoon, November 21, at 4:15, in Hill Auditorium.
The right is reserved to make such changes in the dates and artists announced as necessity may require. While wide and prompt publicity is given to dates changed, to avoid inconvenience it is suggested that, so far as possible, out-of-town guests confirm the dates in advance.