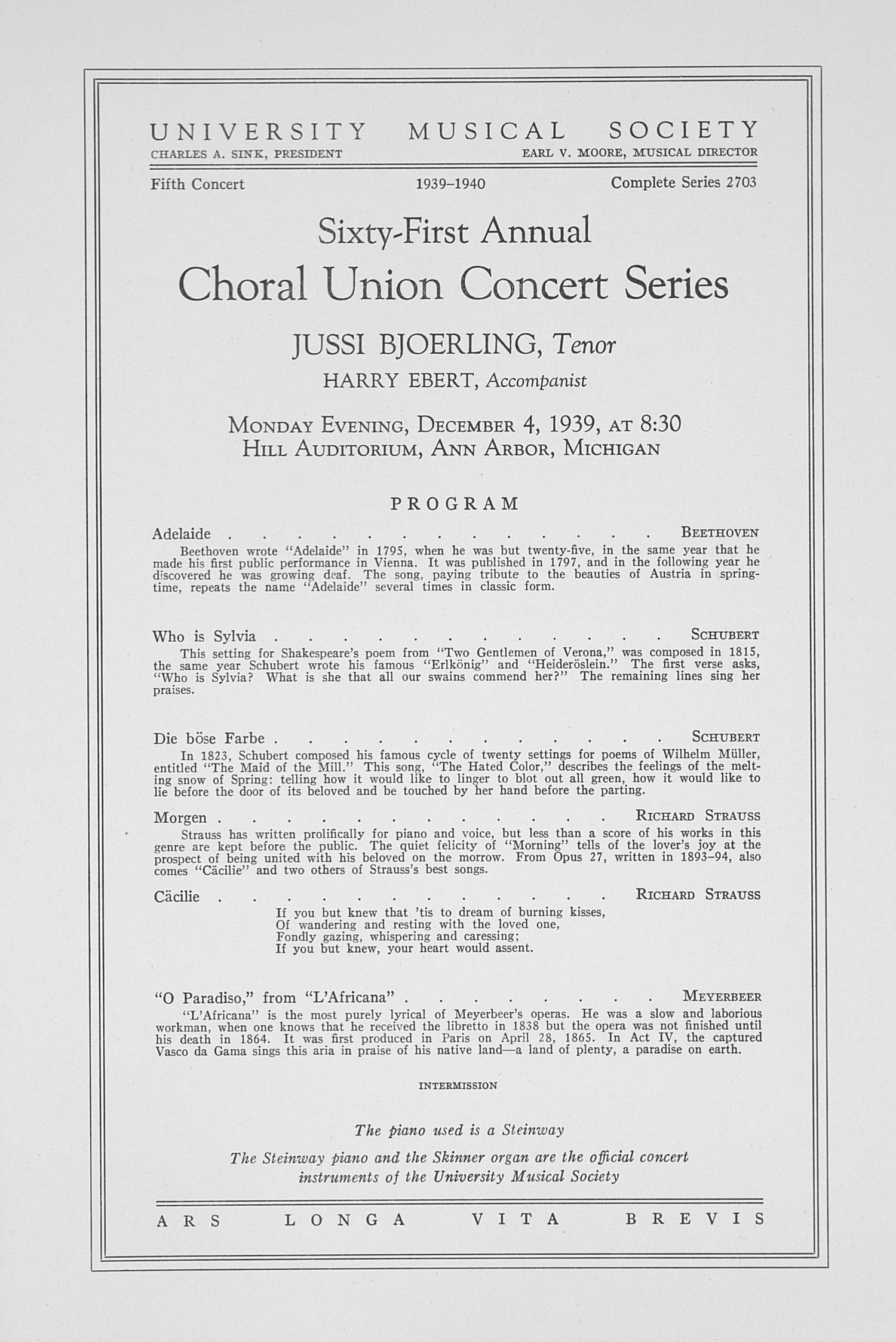 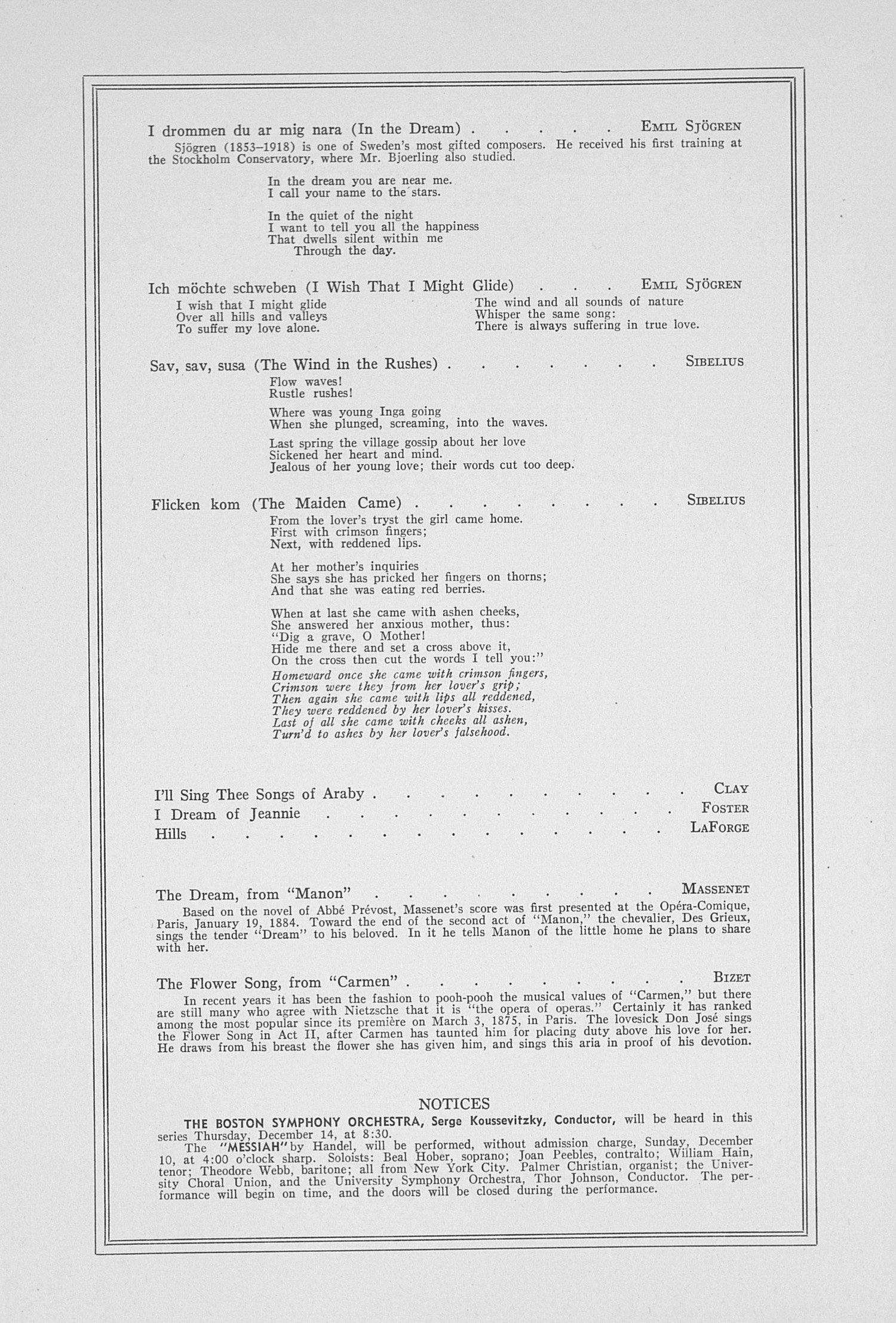 UNIVERSITY MUSICAL SOCIETY
CHARLES A. SINK, PRESIDENT EARL V. MOORE, MUSICAL DIRECTOR
Fifth Concert 1939-1940 Complete Series 2703
SixtyFirst Annual
Choral Union Concert Series
JUSSI BJOERLING, Tenor
HARRY EBERT, Accompanist
Monday Evening, December 4, 1939, at 8:30 Hill Auditorium, Ann Arbor, Michigan
PROGRAM
Adelaide.............Beethoven
Beethoven wrote "Adelaide" in 1795, when he was but twenty-five, in the same year that he made his first public performance in Vienna. It was published in 1797, and in the following year he discovered he was growing deaf. The song, paying tribute to the beauties of Austria in springtime, repeats the name "Adelaide" several times in classic form.
Who is Sylvia............Schubert
This setting for Shakespeare's poem from "Two Gentlemen of Verona," was composed in 1815, the same year Schubert wrote his famous "Erlkonig" and "Heideroslein." The first verse asks, "Who is Sylvia What is she that all our swains commend her" The remaining lines sing her praises.
Die bose Farbe ............ Schubert
In 1823, Schubert composed his famous cycle of twenty settings for poems of Wilhelm Miiller, entitled "The Maid of the Mill." This song, "The Hated Color," describes the feelings of the melting snow of Spring: telling how it would like to linger to blot out all green, how it would like to lie before the door of its beloved and be touched by her hand before the parting.
Morgen............Richard Strauss
Strauss has written prolifically for piano and voice, but less than a score of his works in this genre are kept before the public. The quiet felicity of "Morning" tells of the lover's joy at the prospect of being united with his beloved on the morrow. From Opus 27, written in 1893-94, also comes "Cacilie" and two others of Strauss's best songs.
Cacilie............Richard Strauss
If you but knew that 'tis to dream of burning kisses, Of wandering and resting with the loved one, Fondly gazing, whispering and caressing; If you but knew, your heart would assent.
"O Paradiso," from "L'Africana"........Meyerbeer
"L'Africana" is the most purely lyrical of Meyerbeer's operas. He was a slow and laborious workman, when one knows that he received the libretto in 1838 but the opera was not finished until his death in 1864. It was first produced in Paris on April 28, 1865. In Act IV, the captured Vasco da Gama sings this aria in praise of his native land--a land of plenty, a paradise on earth.
INTERMISSION
The piano used is a Steinway
The Steinway piano and the Skinner organ are the official concert instruments of the University Musical Society
ARS LONGA VITA BREVIS
I drommen du ar mig nara (In the Dream).....Emu, Sjogren
Sjogren (1853-1918) is one of Sweden's most gifted composers. He received his first training at the Stockholm Conservatory, where Mr. Bjoerling also studied.
In the dream you are near me. I call your name to the stars.
In the quiet of the night I want to tell you all the happiness That dwells silent within me Through the day.
Ich mochte schweben (I Wish That I Might Glide) . . . Emu, Sjogren
I wish that I might glide The wind and all sounds of nature
Over all hills and valleys Whisper the same song:
To suffer my love alone. There is always suffering in true love.
Sav, sav, susa (The Wind in the Rushes).......Sibelius
Flow waves! Rustle rushes!
Where was young Inga going
When she plunged, screaming, into the waves.
Last spring the village gossip about her love
Sickened her heart and mind.
Jealous of her young love; their words cut too deep.
Flicken kom (The Maiden Came) ........ Sibelius
From the lover's tryst the girl came home. First with crimson fingers; Next, with reddened lips.
At her mother's inquiries
She says she has pricked her fingers on thorns;
And that she was eating red berries.
When at last she came with ashen cheeks, She answered her anxious mother, thus: "Dig a grave, O Mother I Hide me there and set a cross above it, On the cross then cut the words I tell you:" Homeward once she came with crimson fingers, Crimson were they from her lover's grip; Then again she came with lips all reddened, They were reddened by her lover's kisses. Last of all she came with cheeks all ashen, Turn'd to ashes by her lover's falsehood.
I'll Sing Thee Songs of Araby..........Clay
I Dream of Jeannie...........Foster
Hills..............LaForge
The Dream, from "Manon".........Massenet
Based on the novel of Abbe Prevost, Massenet's score was first presented at the Opera-Comique, Paris, January 19, 1884. Toward the end of the second act of "Manon," the chevalier, Des Grieux, sings the tender "Dream" to his beloved. In it he tells Manon of the little home he plans to share with her.
The Flower Song, from "Carmen".........Bizet
In recent years it has been the fashion to pooh-pooh the musical values of "Carmen," but there are still many who agree with Nietzsche that it is "the opera of operas." Certainly it has ranked among the most popular since its premiere on March 3, 1875, in Paris. The lovesick Don Jose sings the Flower Song in Act II, after Carmen has taunted him for placing duty above his love for her. He draws from his breast the flower she has given him, and sings this aria in proof of his devotion.
NOTICES
THE BOSTON SYMPHONY ORCHESTRA, Serge Koussevitzky, Conductor, will be heard in this series Thursday, December 14, at 8:30.
The "MESSIAH" by Handel, will be performed, without admission charge, Sunday, December 10, at 4:00 o'clock sharp. Soloists: Beal Hober, soprano; Joan Peebles, contralto; William Hain, tenor; Theodore Webb, baritone; all from New York City. Palmer Christian, organist; the University Choral Union, and the University Symphony Orchestra, Thor Johnson, Conductor. The performance will begin on time, and the doors will be closed during the performance.