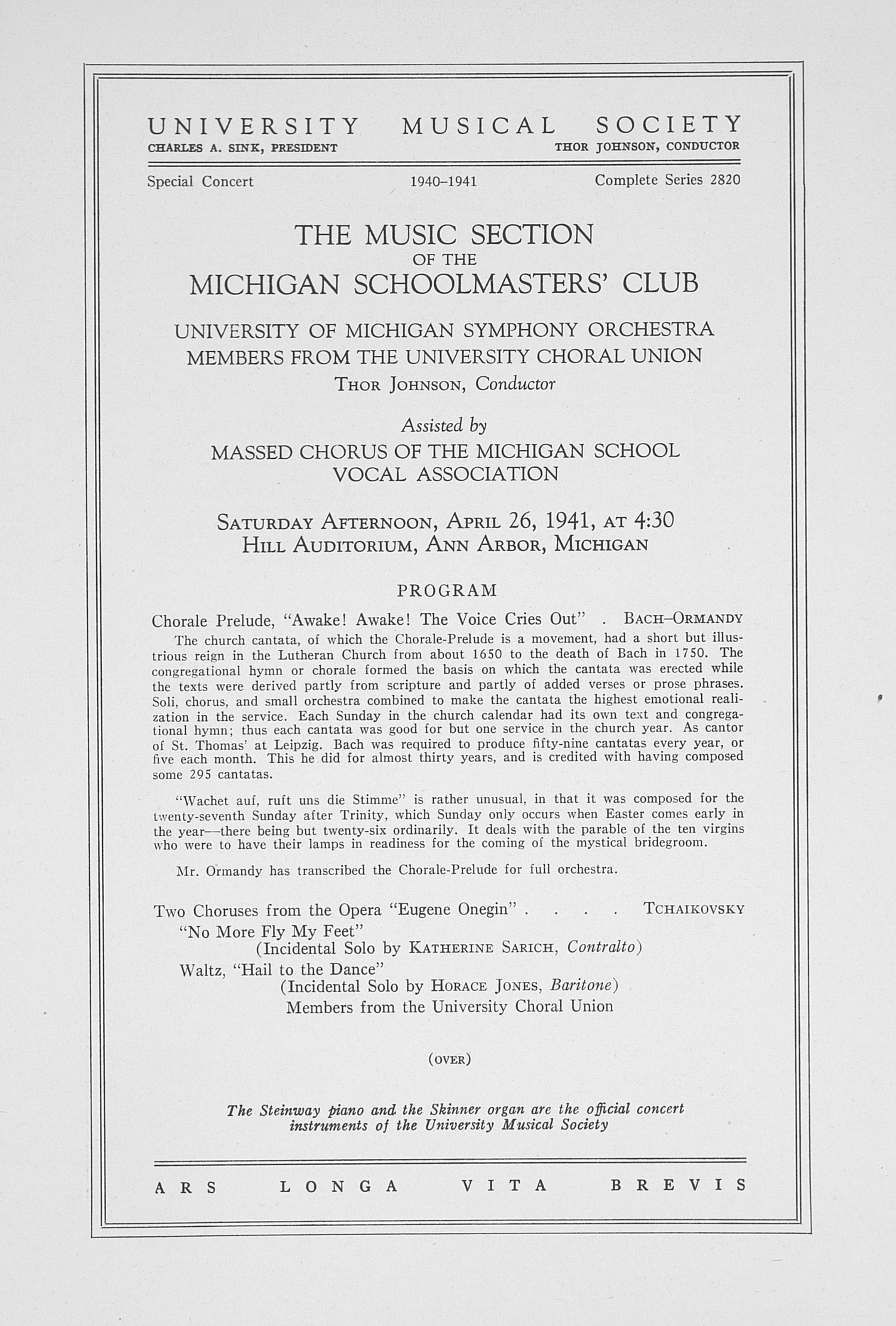 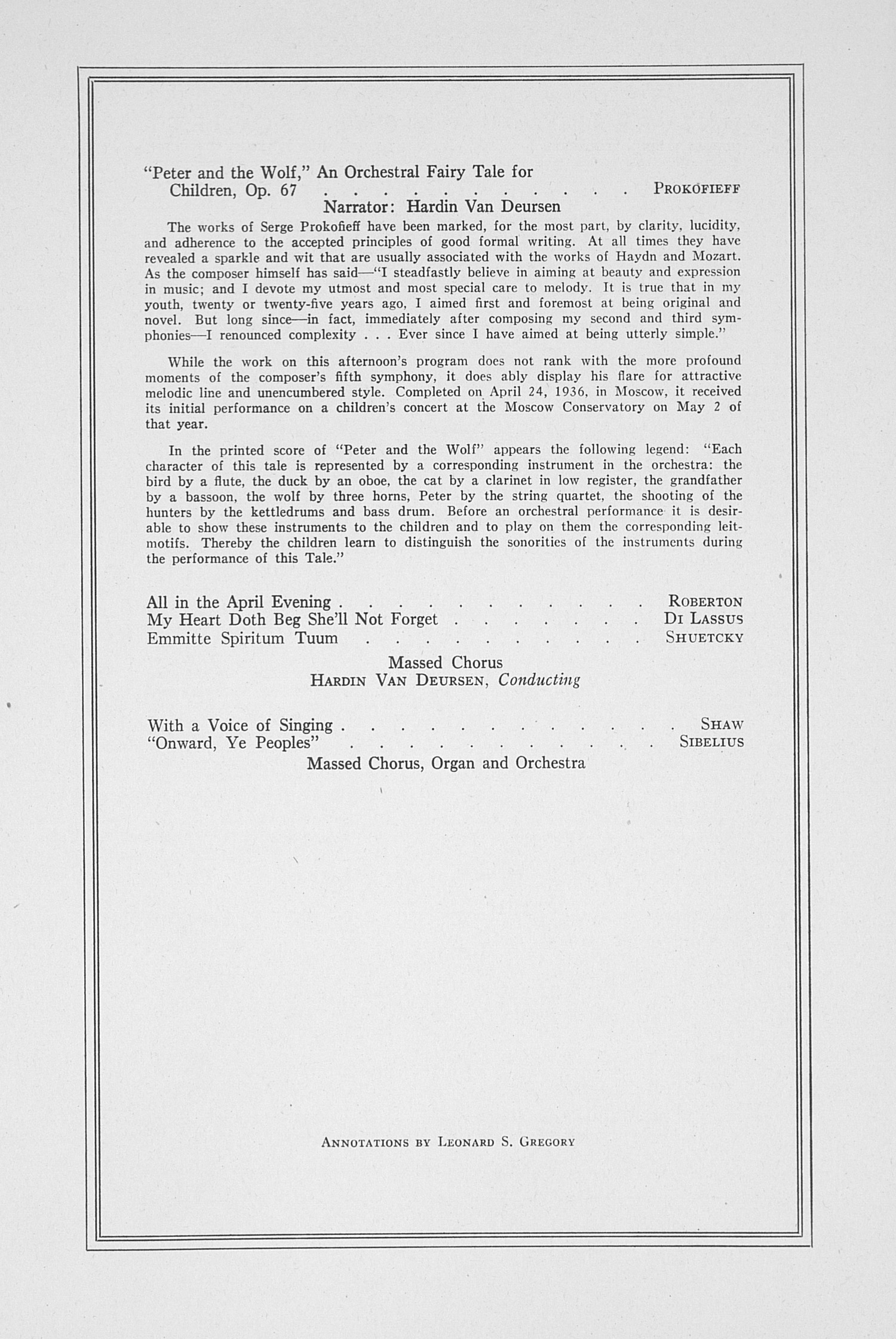 Special Concert
UNIVERSITY MUSICAL SOCIETY
CHARLES A. SINK, PRESIDENT THOR JOHNSON, CONDUCTOR
Special Concert 1940-1941 Complete Series 2820
THE MUSIC SECTION
OF THE
MICHIGAN SCHOOLMASTERS' CLUB
UNIVERSITY OF MICHIGAN SYMPHONY ORCHESTRA
MEMBERS FROM THE UNIVERSITY CHORAL UNION
Thor Johnson, Conductor
Assisted by
MASSED CHORUS OF THE MICHIGAN SCHOOL VOCAL ASSOCIATION
Saturday Afternoon, April 26, 1941, at 4:30 Hill Auditorium, Ann Arbor, Michigan
PROGRAM
Chorale Prelude, "Awake! Awake! The Voice Cries Out" . Bach-Ormandy The church cantata, of which the Chorale-Prelude is a movement, had a short but illustrious reign in the Lutheran Church from about 1650 to the death of Bach in 1750. The congregational hymn or chorale formed the basis on which the cantata was erected while the texts were derived partly from scripture and partly of added verses or prose phrases. Soli, chorus, and small orchestra combined to make the cantata the highest emotional realization in the service. Each Sunday in the church calendar had its own text and congregational hymn; thus each cantata was good for but one service in the church year. As cantor of St. Thomas' at Leipzig. Bach was required to produce fifty-nine cantatas every year, or five each month. This he did for almost thirty years, and is credited with having composed some 295 cantatas.
"Wachet auf, ruft uns die Stimme" is rather unusual, in that it was composed for the twenty-seventh Sunday after Trinity, which Sunday only occurs when Easter comes early in the year--there being but twenty-six ordinarily. It deals with the parable of the ten virgins who were to have their lamps in readiness for the coming of the mystical bridegroom.
Mr. Ormandy has transcribed the Chorale-Prelude for full orchestra.
Two Choruses from the Opera "Eugene Onegin" .... Tchaikovsky "No More Fly My Feet"
(Incidental Solo by Katherine Sarich, Contralto)
Waltz, "Hail to the Dance"
(Incidental Solo by Horace Jones, Baritone) Members from the University Choral Union
(over)
The Steinway piano and the Skinner organ are the official concert instruments of the University Musical Society
A R S LONGA VITA BREVIS
"Peter and the Wolf," An Orchestral Fairy Tale for
Children, Op. 67...........ProkOfieff
Narrator: Hardin Van Deursen
The works of Serge Prokofieff have been marked, for the most part, by clarity, lucidity, and adherence to the accepted principles of good formal writing. At all times they have revealed a sparkle and wit that are usually associated with the works of Haydn and Mozart. As the composer himself has said--"I steadfastly believe in aiming at beauty and expression in music; and I devote my utmost and most special care to melody. It is true that in my youth, twenty or twenty-five years ago, I aimed first and foremost at being original and novel. But long since--in fact, immediately after composing my second and third symphonies--I renounced complexity . . . Ever since I have aimed at being utterly simple."
While the work on this afternoon's program docs not rank with the more profound moments of the composer's fifth symphony, it does ably display his flare for attractive melodic line and unencumbered style. Completed on April 24, 1936. in Moscow, it received its initial performance on a children's concert at the Moscow Conservatory on May 2 of that year.
In the printed score of "Peter and the Wolf" appears the following legend: "Each character of this tale is represented by a corresponding instrument in the orchestra: the bird by a flute, the duck by an oboe, the cat by a clarinet in low register, the grandfather by a bassoon, the wolf by three horns, Peter by the string quartet, the shooting of the hunters by the kettledrums and bass drum. Before an orchestral performance it is desirable to show these instruments to the children and to play on them the corresponding leitmotifs. Thereby the children learn to distinguish the sonorities of the instruments during the performance of this Tale."
All in the April Evening...........Roberton
My Heart Doth Beg She'll Not Forget.......Di Lassus
Emmitte Spiritum Tuum..........Shuetcky
Massed Chorus Hardin Van Deursen, Conducting
With a Voice of Singing............Shaw
"Onward, Ye Peoples"........... . Sibelius
Massed Chorus, Organ and Orchestra
Annotations by Leonard S. (Jregory