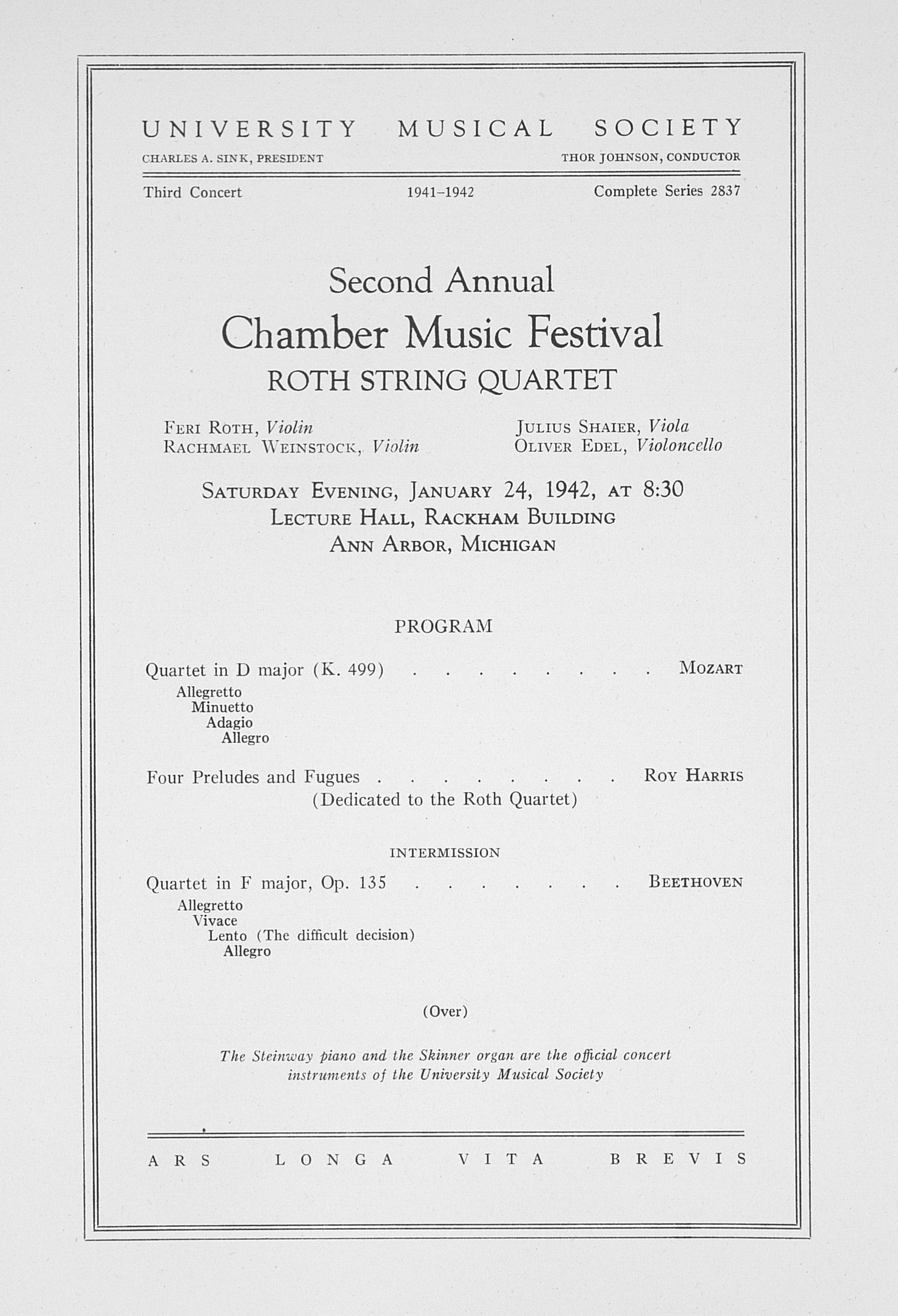 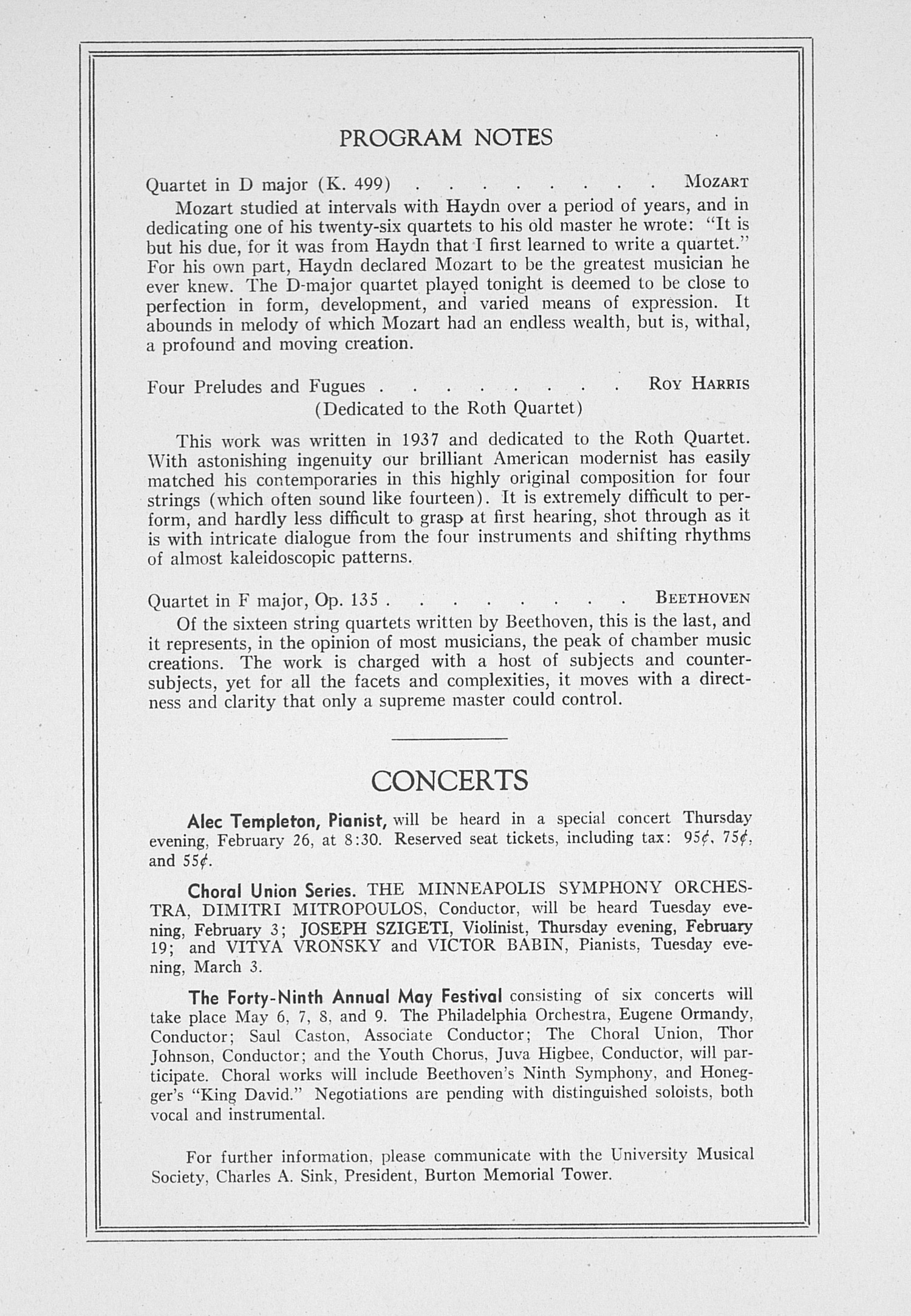 UNIVERSITY MUSICAL SOCIETY
CHARLES A. SINK, PRESIDENT THOR JOHNSON, CONDUCTOR
Third Concert 1941-1942 Complete Series 2837
Second Annual
Chamber Music Festival
ROTH STRING QUARTET
Feri Roth, Violin Julius Shaier, Viola
Rachmael Weinstocic, Violin Oliver Edel, Violoncello
Saturday Evening, January 24, 1942, at 8:30
Lecture Hall, Rackham Building
Ann Arbor, Michigan
PROGRAM
Quartet in D major (K. 499)........Mozart
Allegretto Minuetto Adagio Allegro
Four Preludes and Fugues........Roy Harris
(Dedicated to the Roth Quartet)
INTERMISSION
Quartet in F major, Op. 135.......Beethoven
Allegretto Vivace
Lento (The difficult decision) Allegro
(Over)
The Steinway piano and the Skinner organ are the official concert instruments of the University Musical Society
ARS LONGA VITA BREVIS
PROGRAM NOTES
Quartet in D major (K. 499)........ Mozart
Mozart studied at intervals with Haydn over a period of years, and in dedicating one of his twenty-six quartets to his old master he wrote: "It is but his due, for it was from Haydn that I first learned to write a quartet." For his own part, Haydn declared Mozart to be the greatest musician he ever knew. The D-major quartet played tonight is deemed to be close to perfection in form, development, and varied means of expression. It abounds in melody of which Mozart had an endless wealth, but is, withal, a profound and moving creation.
Four Preludes and Fugues........Roy Harris
(Dedicated to the Roth Quartet)
This work was written in 1937 and dedicated to the Roth Quartet. With astonishing ingenuity our brilliant American modernist has easily matched his contemporaries in this highly original composition for four strings (which often sound like fourteen). It is extremely difficult to perform, and hardly less difficult to grasp at first hearing, shot through as it is with intricate dialogue from the four instruments and shifting rhythms of almost kaleidoscopic patterns.
Quartet in F major, Op. 135 ........Beethoven
Of the sixteen string quartets written by Beethoven, this is the last, and it represents, in the opinion of most musicians, the peak of chamber music creations. The work is charged with a host of subjects and countersubjects, yet for all the facets and complexities, it moves with a directness and clarity that only a supreme master could control.
CONCERTS
Alec Templeton, Pianist, will be heard in a special concert Thursday evening, February 26, at 8:30. Reserved seat tickets, including tax: 95, TSf. and 55.
Choral Union Series. THE MINNEAPOLIS SYMPHONY ORCHESTRA, DIMITRI MITROPOULOS. Conductor, will be heard Tuesday evening, February 3; JOSEPH SZIGETI, Violinist, Thursday evening, February 19; and VITYA VRONSKY and VICTOR BABIN, Pianists, Tuesday evening, March 3.
The Forty-Ninth Annual May Festival consisting of six concerts will take place May 6, 7, 8. and 9. The Philadelphia Orchestra, Eugene Ormandy, Conductor; Saul Caston. Associate Conductor; The Choral Union, Thor Johnson, Conductor; and the Youth Chorus. Juva Higbee, Conductor, will participate. Choral works will include Beethoven's Ninth Symphony, and Honegger's "King David." Negotiations are pending with distinguished soloists, both vocal and instrumental.
For further information, please communicate with the University Musical Society, Charles A. Sink, President, Burton Memorial Tower.