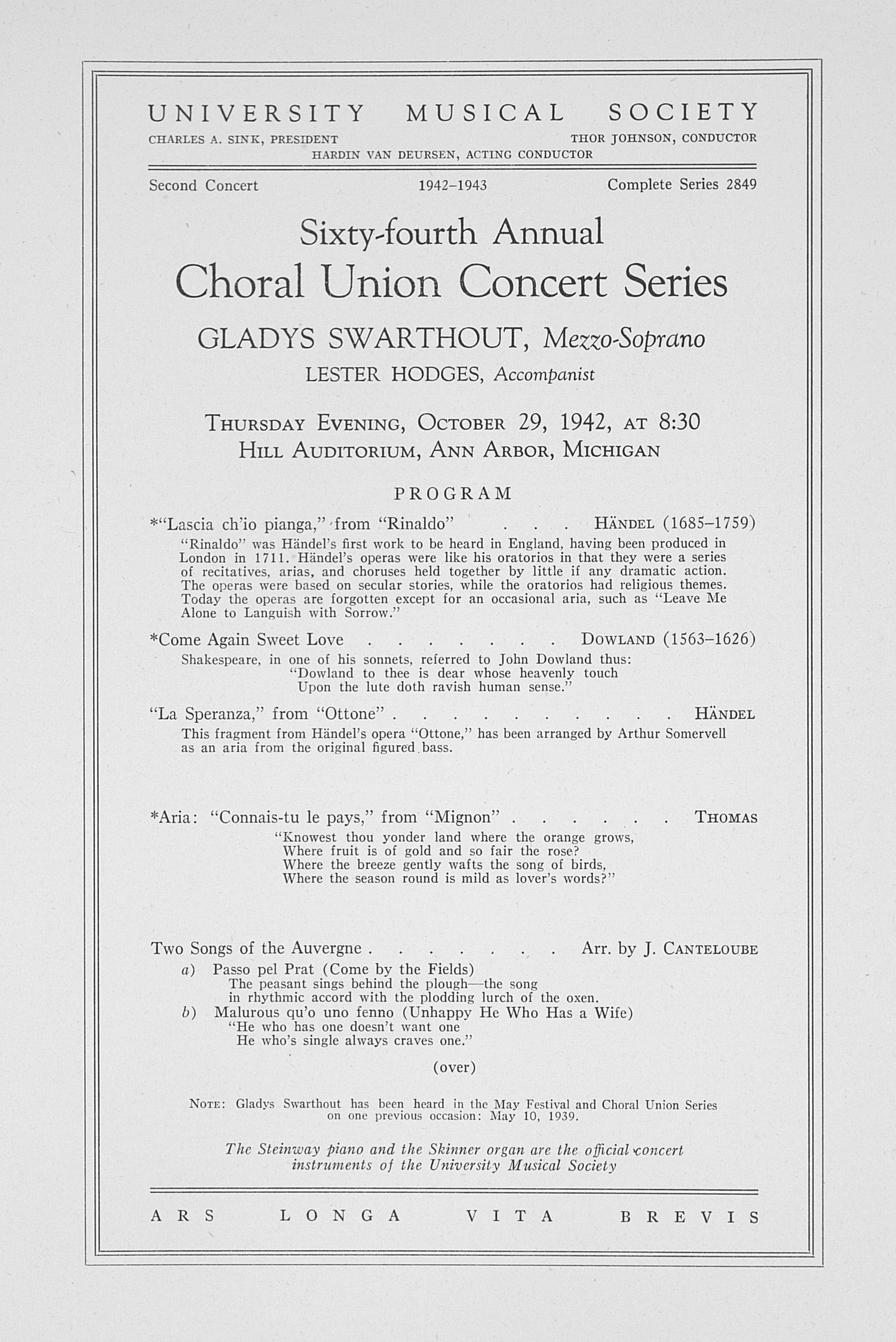 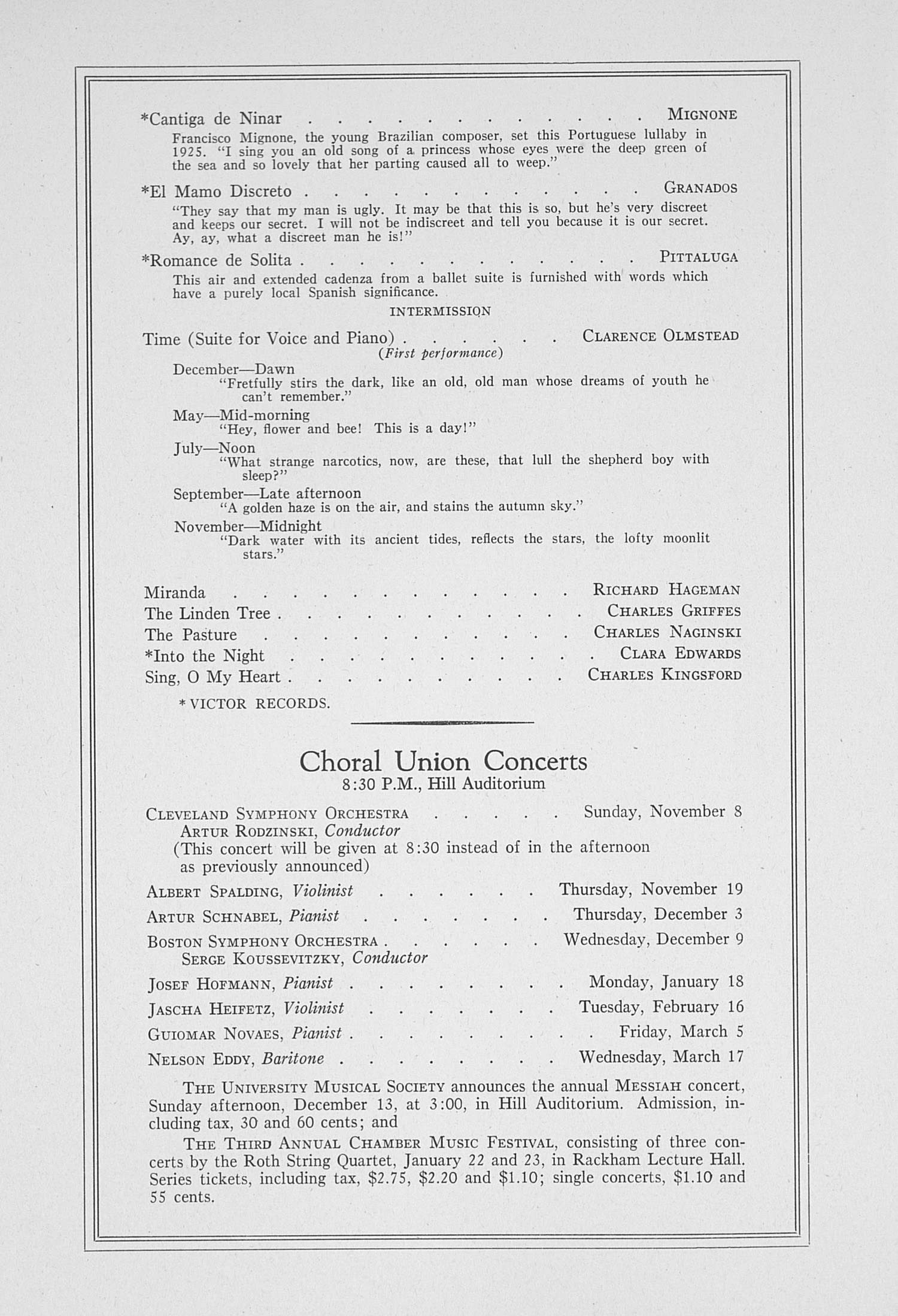 UNIVERSITY MUSICAL SOCIETY
CHARLES A. SINK, PRESIDENT THOR JOHNSON, CONDUCTOR
HARDIN VAN DEURSEN, ACTING CONDUCTOR
Second Concert 1942-1943 Complete Series 2849
Sixty-fourth Annual
Choral Union Concert Series
GLADYS SWARTHOUT, Mezzo-Soprano
LESTER HODGES, Accompanist
Thursday Evening, October 29, 1942, at 8:30 Hill Auditorium, Ann Arbor, Michigan
PROGRAM
"Lascia civicpianga," Â¦from "Rinaldo" . . . Handel (1685-1759)
"Rinaldo" was Handel's first work to be heard in England, having been produced in London in 1711. Handel's operas were like his oratorios in that they were a series of recitatives, arias, and choruses held together by little if any dramatic action. The operas were based on secular stories, while the oratorios had religious themes. Today the operas are forgotten except for an occasional aria, such as "Leave Me Alone to Languish with Sorrow."
Come Again Sweet Love Dowland (1563-1626)
Shakespeare, in one of his sonnets, referred to John Dowland thus: "Dowland to thee is dear whose heavenly touch Upon the lute doth ravish human sense."
"La Speranza," from "Ottone" Handel
This fragment from Handel's opera "Ottone," has been arranged by Arthur Soniervell as an aria from the original figured.bass.
Aria: "Connais-tu le pays," from "Mignon" Thomas
"Knowest thou yonder land where the orange grows, Where fruit is of gold and so fair the rose Where the breeze gently wafts the song of birds, Where the season round is mild as lover's words"
Two Songs of the Auvergne Arr. by J. Canteloube
a) Passo pel Prat (Come by the Fields)
The peasant sings behind the plough--the song
in rhythmic accord with the plodding lurch of the oxen.
b) Malurous qu'o uno fenno (Unhappy He Who Has a Wife)
"He who has one doesn't want one He who's single always craves one."
(over)
Note: Gladys Swarthout has been heard in the May Festival and Choral Union Series on one previous occasion: May 10, 1939.
The Steinway piano and the Skinner organ are the official concert instruments of the University Musical Society
ARS LONGA VITA BREVIS
?Cantiga de Ninar Mignone
Francisco Mignone, the young Brazilian composer, set this Portuguese lullaby in 1925. "I sing you an old song of a princess whose eyes were the deep green of the sea and so lovely that her parting caused all to weep."
E1 Mamo Discreto Granados
"They say that my man is ugly. It may be that this is so, but he's very discreet and keeps our secret. I will not be indiscreet and tell you because it is our secret. Ay, ay, what a discreet man he is!"
Romance de Solita Pittaluga
This air and extended cadenza from a ballet suite is furnished with words which have a purely local Spanish significance.
INTERMISSION
Time (Suite for Voice and Piano) Clarence Olmstead
(First perjormance) December--Dawn
"Fretfully stirs the dark, like an old, old man whose dreams of youth he can't remember."
May--Mid-morning
"Hey, flower and bee! This is a day!"
July--Noon
"What strange narcotics, now, are these, that lull the shepherd boy with sleep"
September--Late afternoon
"A golden haze is on the air, and stains the autumn sky."
November--Midnight
"Dark water with its ancient tides, reflects the stars, the lofty moonlit stars."
Miranda Richard Hageman
The Linden Tree Charles Griffes
The Pasture Â¦. . Charles Naginski
Into the Night Clara Edwards
Sing, 0 My Heart Charles Kingsford
?VICTOR RECORDS.
Choral Union Concerts
8:30 P.M., Hill Auditorium
Cleveland Symphony Orchestra Sunday, November 8
Artur Rodzinski, Conductor
(This concert will be given at 8:30 instead of in the afternoon as previously announced)
Albert Spalding, Violinist Thursday, November 19
Artur Schnabel, Pianist Thursday, December 3
Boston Symphony Orchestra Wednesday, December 9
Serge Koussevitzky, Conductor
Josef Hofmann, Pianist Monday, January 18
Jascha Heifetz, Violinist Tuesday, February 16
Guiomar Novaes, Pianist Friday, March S
Nelson Eddy, Baritone . . Wednesday, March 17
The University Musical Society announces the annual Messiah concert, Sunday afternoon, December 13, at 3:00, in Hill Auditorium. Admission, inÂ­cluding tax, 30 and 60 cents; and
The Third Annual Chamber Music Festival, consisting of three conÂ­certs by the Roth String Quartet, January 22 and 23, in Rackham Lecture Hall. Series tickets, including tax, $2.75, $2.20 and $1.10; single concerts, $1.10 and 55 cents.