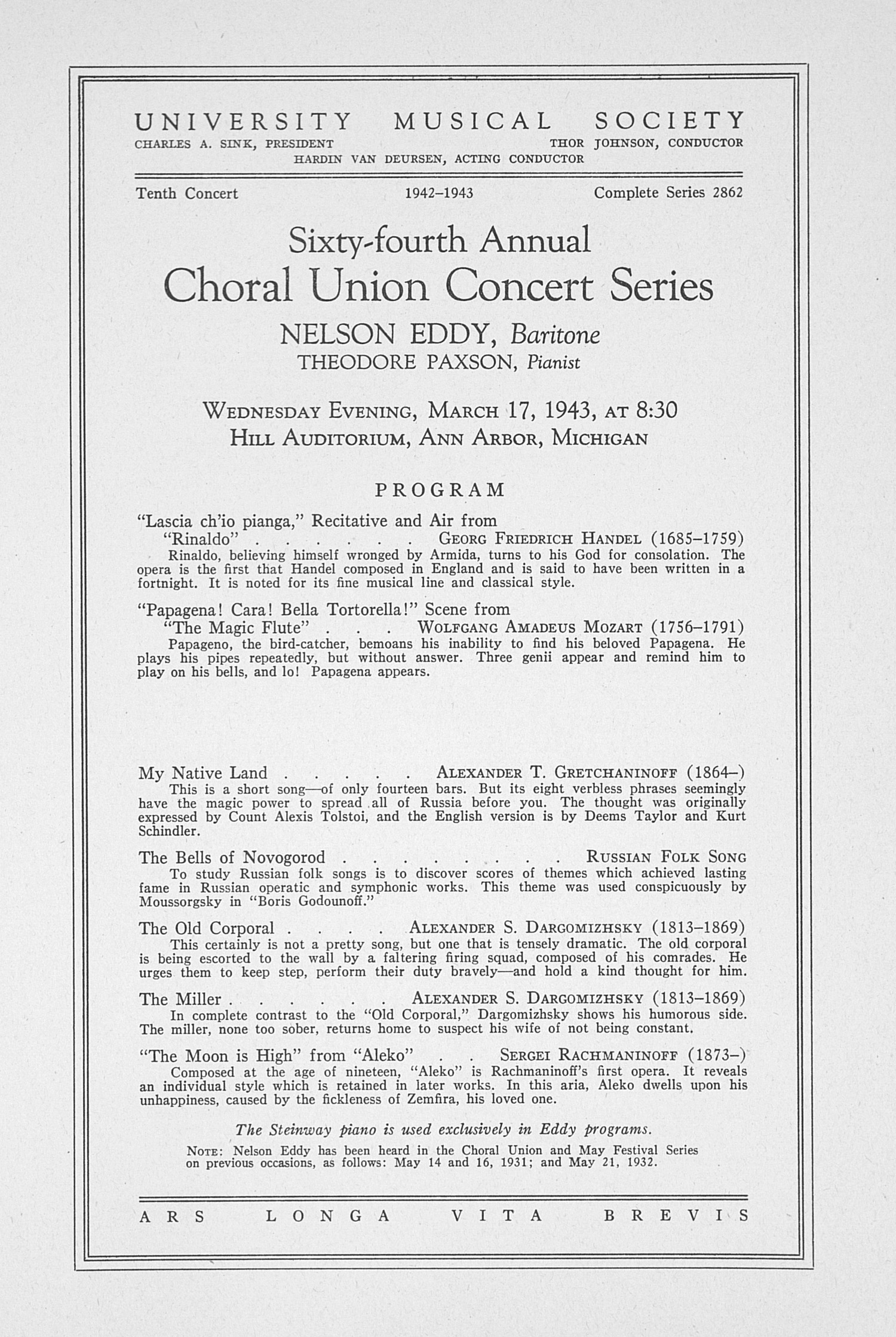 UNIVERSITY MUSICAL SOCIETY
CHARLES A. SINK, PRESIDENT THOR JOHNSON, CONDUCTOR
HARDIN VAN DEURSEN, ACTING CONDUCTOR
Tenth Concert 1942-1943 Complete Series 2862
Sixty-fourth Annual
Choral Union Concert Series
NELSON EDDY, Baritone
THEODORE PAXSON, Pianist
Wednesday Evening, March 17, 1943, at 8:30 Hill Auditorium, Ann Arbor, Michigan
PROGRAM
"Lascia ch'io pianga," Recitative and Air from
"Rinaldo"......Georg Friedrich Handel (1685--1759)
Rinaldo, believing himself wronged by Armida, turns to his God for consolation. The opera is the first that Handel composed in England and is said to have been written in a fortnight. It is noted for its fine musical line and classical style.
"Papagena! Cara! Bella Tortorella!" Scene from
"The Magic Flute" . . . Wolfgang Amadeus Mozart (1756-1791)
Papageno, the bird-catcher, bemoans his inability to find his beloved Papagena. He plays his pipes repeatedly, but without answer. Three genii appear and remind him to play on his bells, and lo! Papagena appears.
My Native Land.....Alexander T. Gretchaninoff (1864-)
This is a short song--of only fourteen bars. But its eight verbless phrases seemingly have the magic power to spread all of Russia before you. The thought was originally expressed by Count Alexis Tolstoi, and the English version is by Deems Taylor and Kurt Schindler.
The Bells of Novogorod....... . . Russian Folk Song
To study Russian folk songs is to discover scores of themes which achieved lasting fame in Russian operatic and symphonic works. This theme was used conspicuously by Moussorgsky in "Boris Godounoff."
The Old Corporal .... Alexander S. Dargomizhsky (1813-1869)
This certainly is not a pretty song, but one that is tensely dramatic. The old corporal
is being escorted to the wall by a faltering firing squad, composed of his comrades. He
urges them to keep step, perform their duty bravely--and hold a kind thought for him.
The Miller......Alexander S. Dargomizhsky (1813-1869)
In complete contrast to the "Old Corporal," Dargomizhsky shows his humorous side. The miller, none too sober, returns home to suspect his wife of not being constant.
"The Moon is High" from "Aleko" . . Sergei Rachmaninoff (1873-) Composed at the age of nineteen, "Aleko" is Rachmaninoff's first opera. It reveals an individual style which is retained in later works. In this aria, Aleko dwells upon his unhappiness, caused by the fickleness of Zemfira, his loved one.
The Steinway piano is used exclusively in Eddy programs.
Note: Nelson Eddy has been heard in the Choral Union and May Festival Series on previous occasions, as follows: May 14 and 16, 1931; and May 21, 1932.
ARS LONGA VITA BREVIS
Poissons d'or (Gold Fish)
Serenade a la poupee (Serenade for the Doll) } . Claude Achille Debussy
Jardins sous la pluie (Gardens in the Rain) J (1862-1918)
Debussy did more than bring a new scale and new harmonies to the musical scheme which had prevailed up to his time. He restored the practice of eighteenth century French composers of making music an illustrative art and a means for re-creating, in sound, impressions of the outside world derived through other senses.
Theodore Paxson
INTERMISSION
"As Then the Tulip" from the song cycle, "In a
Persian Garden".......Liza Lehmann (1862-1918)
The words are a fragment of the Fitzgerald translation of the Rubaiyat of Omar Khayyam. Liza Lehmann was a noted English singer as well as composer. She is accredited with having established the vogue for song cycles in England.
You Are So Young!.......Erich Wolff (1874-1913)
The promising career of this modern Viennese composer was closed suddenly with his death in New York while he was on tour as an accompanist. He was only thirty-nine, but made rich contributions to the literature of the Lied. This song expresses a tender sentiment with exquisite delicacy.
Frog Went A-Courtin'.......Kentucky Mountain Song
Good old American backwoods nonsense! Bringing it to print from Estill County, Kentucky, was not nonsense, however, but required research, ingenuity, and clever musicianship by Loraine Wyman, editor, and Howard Brockway, the musical arranger, of the collection of "Lonesome Tunes."
Tomorrow..........Frederick Keel (1871--)
This song shows the spirit which has carried many a soldier to victory in former wars and is doing the same thing today--something the enemy underestimated. John Masefield wrote the poem. The song is "singable" because Frederick Keel was an accomplished baritone as well as composer.
I Saw You There in the Moonlight......Robert MacGimsey
When a composer can write "Shadrack" and "Tower of Babel", and then a sentimental song like this, one must use the word "versatile" and really mean it. After writing the words, Mr. MacGimsey says the melody came quickly and naturally, and the song was completed in only a few hours.
Danny Boy.........Arr. by Fred. E. Weatherly
The inclusion of this setting of the old Irish "Londonderry Air" is the result of requests by men in the service. They are not in the least embarrassed at having a musical "soft spot" that can be touched. It is interesting that their favorites usually are standard universal selections.
Tower of Babel..........Robert MacGimsey
The Negro can be extremely serious in narrating a Bible story. Again he can do it with delicious humor, as he does in this "Jabber" song. In either case, there is no questioning his reverence and devotion to a good moral.
How Do I Love Thee..........Edouard Lippe
This is one of Elizabeth Barrett Browning's most famous sonnets, expressing vividly her love for her poet-husband. The musical setting is by the former Philadelphia concert and operatic artist, who has been Mr. Eddy's friend and coach for many years.
GOLDEN JUBILEE MAY FESTIVAL
MAY 5, 6, 7, 8 -Six Concerts
THE PHILADELPHIA ORCHESTRA AT ALL CONCERTS
FRITZ KREISLER and VLADIMIR HOROWITZ
and Seven Metropolitan Opera Artists
LILY PONS STELLA ROMAN ASTRID VARNAY KERSTIN THORBORG FREDERICK JAGEL SALVATORE BACCALONI ALEXANDER KIPNIS
EUGENE ORMANDY, SAUL CASTON, HARDIN VAN DEURSEN
and MARGUERITE HOOD, Conductors THE CHORAL UNION and the YOUTH CHORUS
Season Tickets (with tax): $8.80--$7.70--$6.60. Address orders to University Musical Society, Charles A. Sink, President, Burton Memorial Tower.