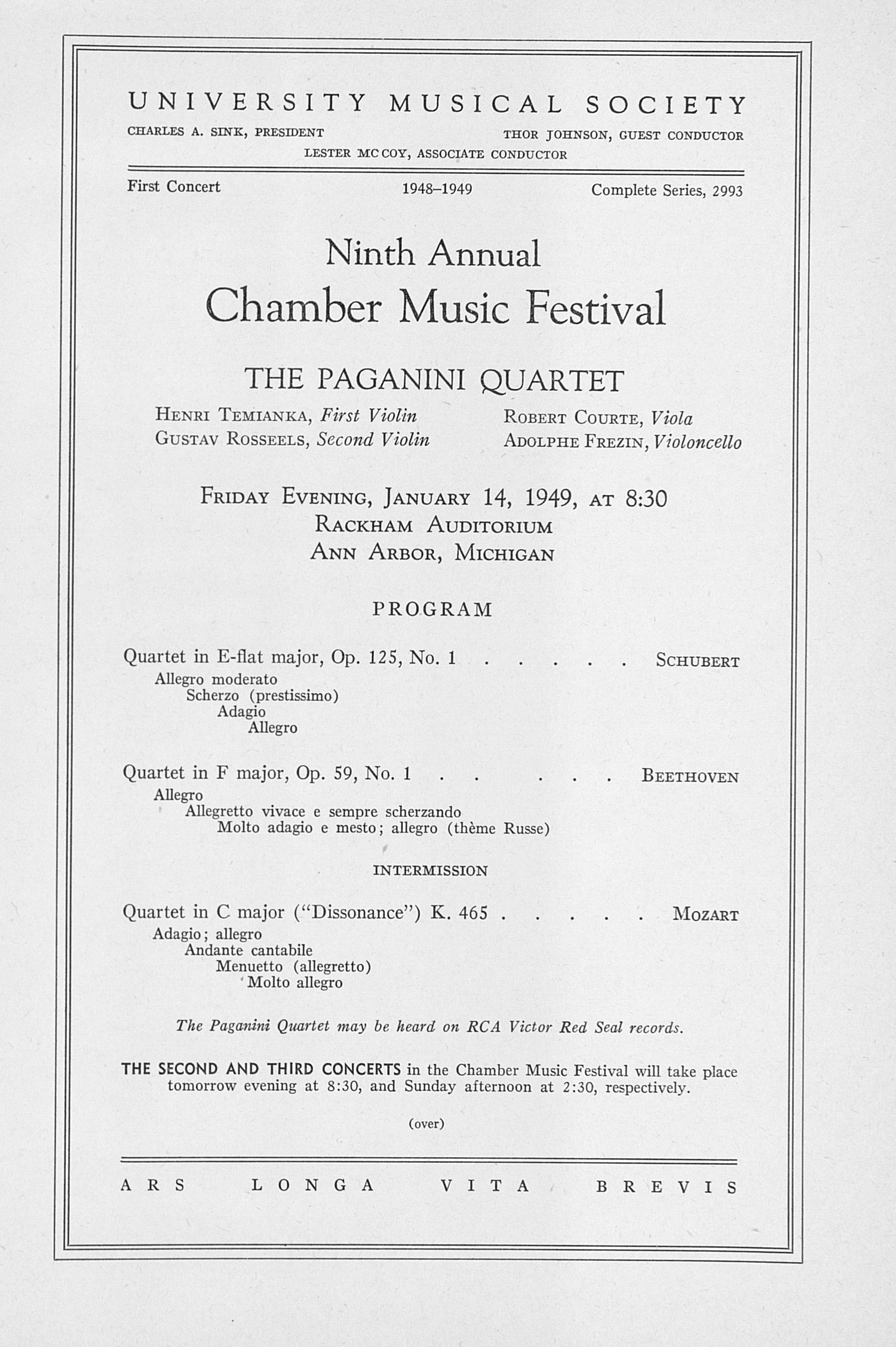 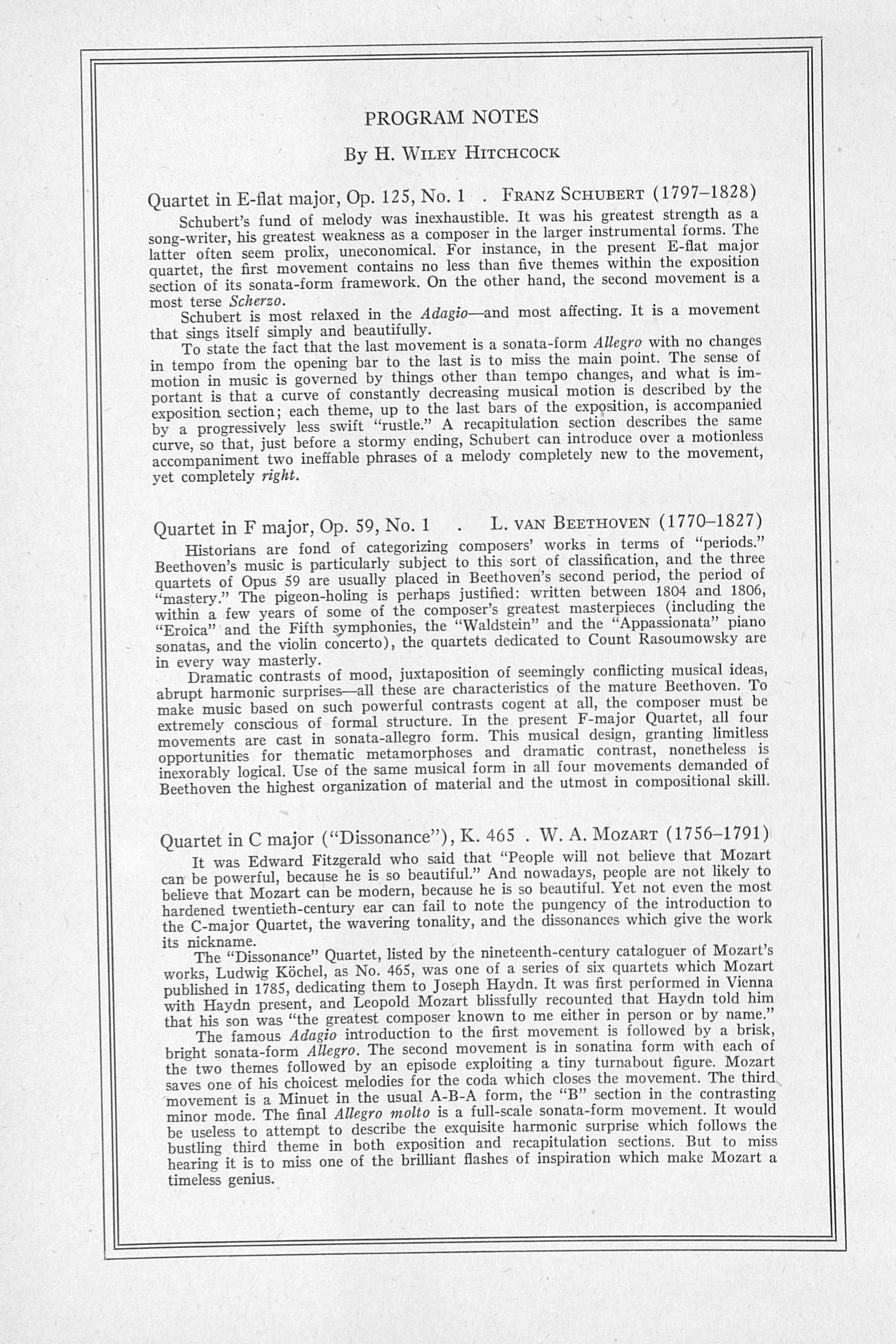 UNIVERSITY MUSICAL SOCIETY
CHARLES A. SINK, PRESIDENT THOR JOHNSON, GUEST CONDUCTOR
LESTER MCCOY, ASSOCIATE CONDUCTOR
First Concert 1948-1949 Complete Series, 2993
Ninth Annual
Chamber Music Festival
THE PAGANINI QUARTET
Henri Temianka, First Violin Robert Courte, Viola
Gustav Rosseels, Second Violin Adolphe Frezin, Violoncello
Friday Evening, January 14, 1949, at 8:30 Rackham Auditorium Ann Arbor, Michigan
PROGRAM
Quartet in E-flat major, Op. 125, No. 1.....Schubert
Allegro moderato
Scherzo (prestissimo) Adagio Allegro
Quartet in F major, Op. 59, No. 1 ... Beethoven
Allegro
Allegretto vivace e sempre scherzando
Molto adagio e mesto; allegro (theme Russe)
INTERMISSION
Quartet in C major ("Dissonance") K. 465.....Mozart
Adagio; allegro
Andante cantabile
Menuetto (allegretto) ' Molto allegro
The Pagamni Quartet may be heard on RCA Victor Red Seal records.
THE SECOND AND THIRD CONCERTS in the Chamber Music Festival will take place tomorrow evening at 8:30, and Sunday afternoon at 2:30, respectively.
(over) ARS LONGA VITA BREVIS
PROGRAM NOTES By H. Wiley Hitchcock
Quartet in E-flat major, Op. 125, No. 1 . Franz Schubert (1797-1828) Schubert's fund of melody was inexhaustible. It was his greatest strength as a song-writer, his greatest weakness as a composer in the larger instrumental forms. The latter often seem prolix, uneconomical. For instance, in the present E-flat major quartet, the first movement contains no less than five themes within the exposition section of its sonata-form framework. On the other hand, the second movement is a most terse Scherzo.
Schubert is most relaxed in the Adagio--and most affecting. It is a movement that sings itself simply and beautifully.
To state the fact that the last movement is a sonata-form Allegro with no changes in tempo from the opening bar to the last is to miss the main point. The sense of motion in music is governed by things other than tempo changes, and what is important is that a curve of constantly decreasing musical motion is described by the exposition section; each theme, up to the last bars of the exposition, is accompanied by a progressively less swift "rustle." A recapitulation section describes the same curve, so that, just before a stormy ending, Schubert can introduce over a motionless accompaniment two ineffable phrases of a melody completely new to the movement, yet completely right.
Quartet in F major, Op. 59, No. 1 . L. van Beethoven (1770-1827)
Historians are fond of categorizing composers' works in terms of "periods." Beethoven's music is particularly subject to this sort of classification, and the three quartets of Opus 59 are usually placed in Beethoven's second period, the period of "mastery." The pigeon-holing is perhaps justified: written between 1804 and 1806, within a few years of some of the composer's greatest masterpieces (including the "Eroica" and the Fifth symphonies, the "Waldstein" and the "Appassionata" piano sonatas, and the violin concerto), the quartets dedicated to Count Rasoumowsky are in every way masterly.
Dramatic contrasts of mood, juxtaposition of seemingly conflicting musical ideas, abrupt harmonic surprises--all these are characteristics of the mature Beethoven. To make music based on such powerful contrasts cogent at all, the composer must be extremely conscious of formal structure. In the present F-major Quartet, all four movements are cast in sonata-allegro form. This musical design, granting limitless opportunities for thematic metamorphoses and dramatic contrast, nonetheless is inexorably logical. Use of the same musical form in all four movements demanded of Beethoven the highest organization of material and the utmost in compositional skill.
Quartet in C major ("Dissonance"), K. 465 . W. A. Mozart (1756-1791)
It was Edward Fitzgerald who said that "People will not believe that Mozart can be powerful, because he is so beautiful." And nowadays, people are not likely to believe that Mozart can be modern, because he is so beautiful. Yet not even the most hardened twentieth-century ear can fail to note the pungency of the introduction to the C-major Quartet, the wavering tonality, and the dissonances which give the work its nickname.
The "Dissonance" Quartet, listed by the nineteenth-century cataloguer of Mozart's works, Ludwig Kochel, as No. 465, was one of a series of six quartets which Mozart published in 1785, dedicating them to Joseph Haydn. It was first performed in Vienna with Haydn present, and Leopold Mozart blissfully recounted that Haydn told him that his son was "the greatest composer known to me either in person or by name."
The famous Adagio introduction to the first movement is followed by a brisk, bright sonata-form Allegro. The second movement is in sonatina form with each of the two themes followed by an episode exploiting a tiny turnabout figure. Mozart saves one of his choicest melodies for the coda which closes the movement. The third movement is a Minuet in the usual A-B-A form, the "B" section in the contrasting minor mode. The final Allegro molto is a full-scale sonata-form movement. It would be useless to attempt to describe the exquisite harmonic surprise which follows the bustling third theme in both exposition and recapitulation sections. But to miss hearing it is to miss one of the brilliant flashes of inspiration which make Mozart a timeless genius.