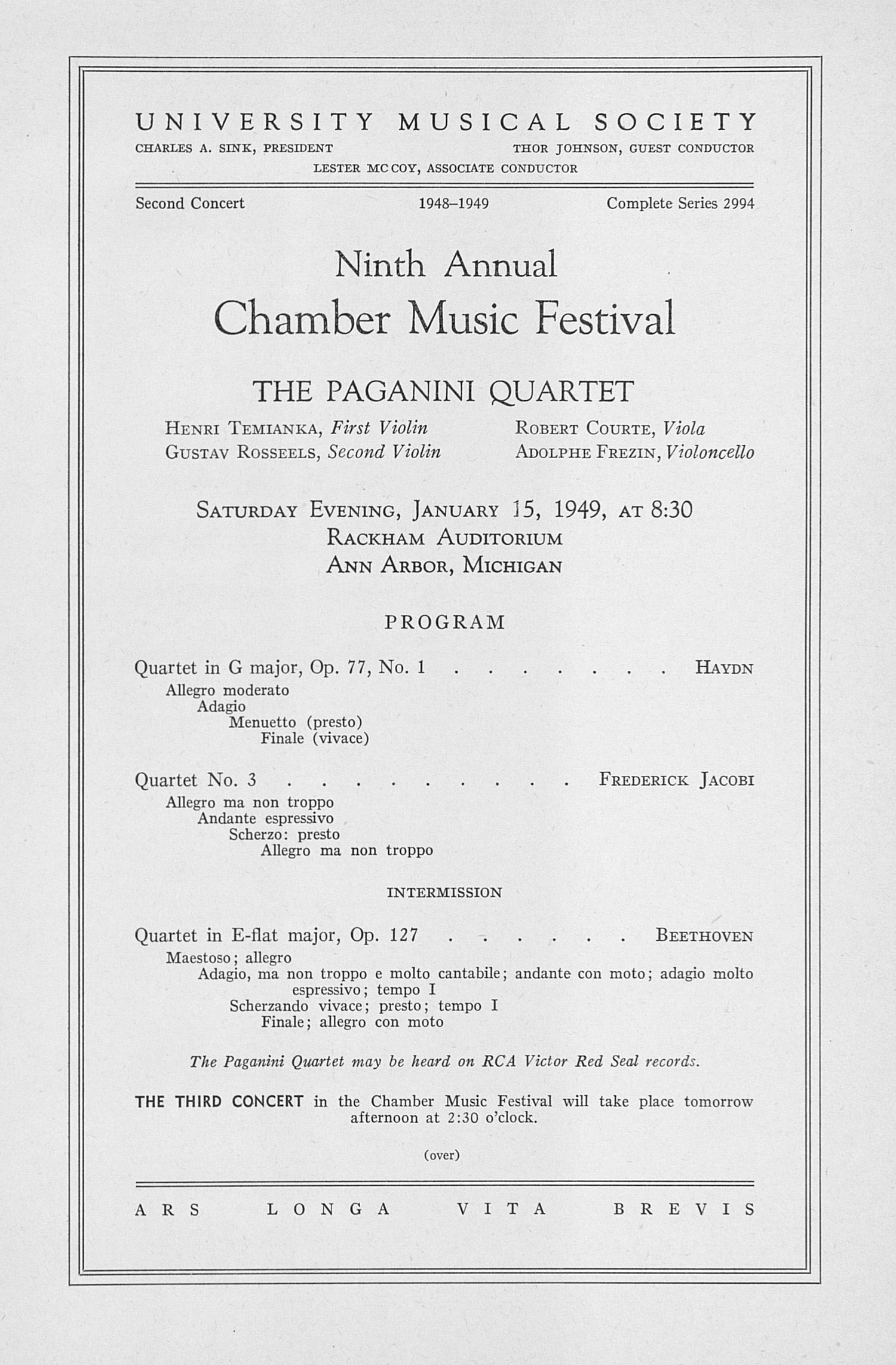 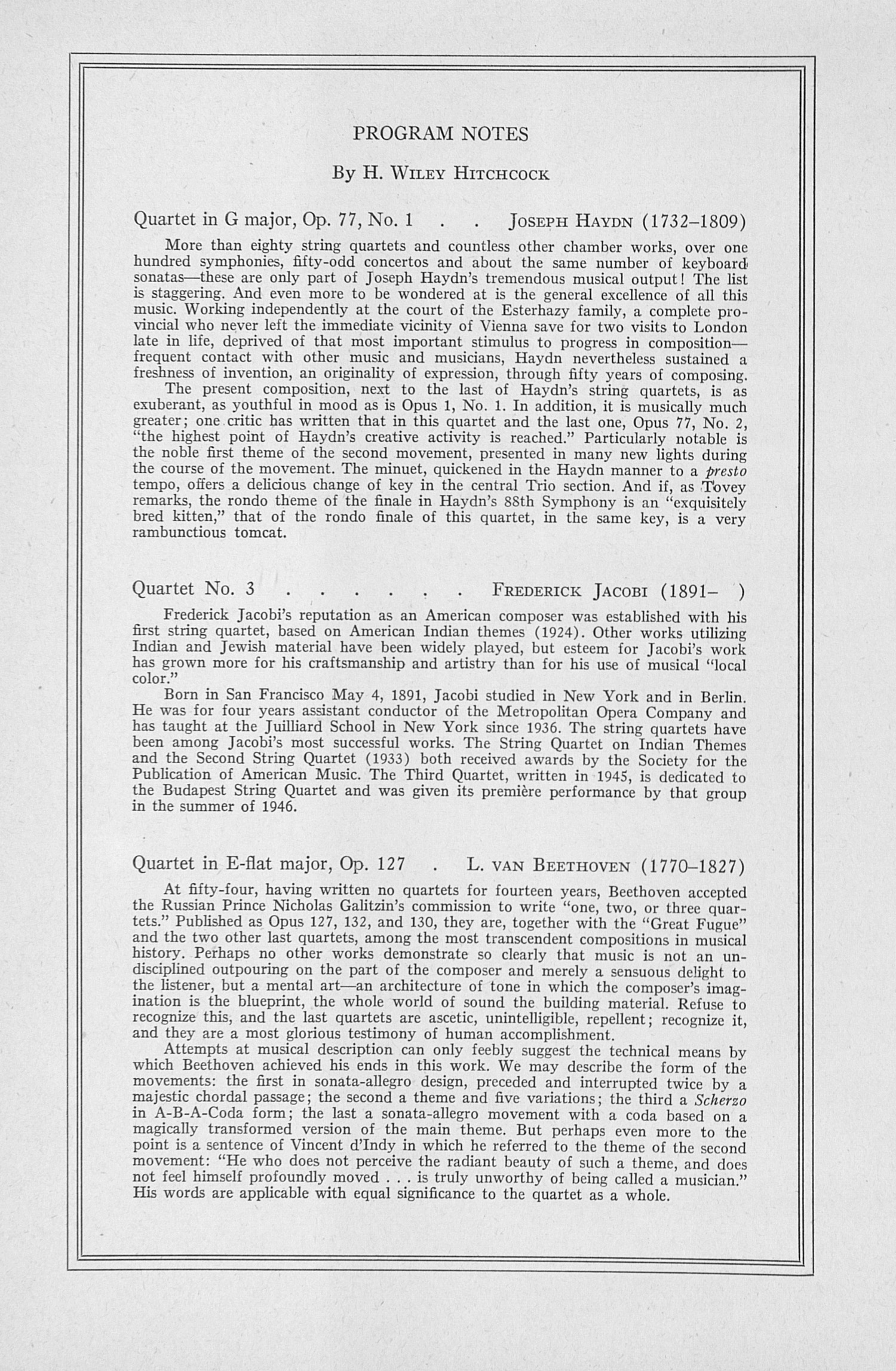 UNIVERSITY MUSICAL SOCIETY
CHARLES A. SINK, PRESIDENT THOR JOHNSON, GUEST CONDUCTOR
LESTER MCCOY, ASSOCIATE CONDUCTOR
Second Concert 1948-1949 Complete Series 2994
Ninth Annual
Chamber Music Festival
THE PAGANINl QUARTET
Henri Temianka, First Violin Robert Courte, Viola
Gustav Rosseels, Second Violin Adolphe Frezin, Violoncello
Saturday Evening, January 15, 1949, at 8:30 Rackham Auditorium Ann Arbor, Michigan
PROGRAM
Quartet in G major, Op. 77, No. 1.......Haydn
Allegro moderato Adagio
Menuetto (presto) Finale (vivace)
Quartet No. 3.........Frederick Jacobi
Allegro ma non troppo Andante espressivo Scherzo: presto
Allegro ma non troppo
INTERMISSION
Quartet in E-flat major, Op. 127......Beethoven
Maestoso; allegro
Adagio, ma non troppo e molto cantabile; andante con moto; adagio molto
espressivo; tempo I Scherzando vivace; presto; tempo I Finale; allegro con moto
The Paganini Quartet may be heard on RCA Victor Red Seal records.
THE THIRD CONCERT in the Chamber Music Festival will take place tomorrow
afternoon at 2:30 o'clock.
(over) ARS LONGA VITA BREVIS
PROGRAM NOTES By H. Wiley Hitchcock
Quartet in G major, Op. 77, No. 1 . . Joseph Haydn (1732-1809)
More than eighty string quartets and countless other chamber works, over one hundred symphonies, fifty-odd concertos and about the same number of keyboard sonatas--these are only part of Joseph Haydn's tremendous musical output! The list is staggering. And even more to be wondered at is the general excellence of all this music. Working independently at the court of the Esterhazy family, a complete provincial who never left the immediate vicinity of Vienna save for two visits to London late in life, deprived of that most important stimulus to progress in composition-frequent contact with other music and musicians, Haydn nevertheless sustained a freshness of invention, an originality of expression, through fifty years of composing.
The present composition, next to the last of Haydn's string quartets, is as exuberant, as youthful in mood as is Opus 1, No. 1. In addition, it is musically much greater; one critic has written that in this quartet and the last one, Opus 77, No. 2, "the highest point of Haydn's creative activity is reached." Particularly notable is the noble first theme of the second movement, presented in many new lights during the course of the movement. The minuet, quickened in the Haydn manner to a presto tempo, offers a delicious change of key in the central Trio section. And if, as Tbvey remarks, the rondo theme of the finale in Haydn's 88th Symphony is an "exquisitely bred kitten," that of the rondo finale of this quartet, in the same key, is a very rambunctious tomcat.
Quartet No. 3......Frederick Jacobi (1891)
Frederick Jacobi's reputation as an American composer was established with his first string quartet, based on American Indian themes (1924). Other works utilizing Indian and Jewish material have been widely played, but esteem for Jacobi's work has grown more for his craftsmanship and artistry than for his use of musical "local color."
Born in San Francisco May 4, 1891, Jacobi studied in New York and in Berlin. He was for four years assistant conductor of the Metropolitan Opera Company and has taught at the Juilliard School in New York since 1936. The string quartets have been among Jacobi's most successful works. The String Quartet on Indian Themes and the Second String Quartet (1933) both received awards by the Society for the Publication of American Music. The Third Quartet, written in 1945, is dedicated to the Budapest String Quartet and was given its premiere performance by that group in the summer of 1946.
Quartet in E-flat major, Op. 127 . L. van Beethoven (1770-1827)
At fifty-four, having written no quartets for fourteen years, Beethoven accepted the Russian Prince Nicholas Galitzin's commission to write "one, two, or three quartets." Published as Opus 127, 132, and 130, they are, together with the "Great Fugue" and the two other last quartets, among the most transcendent compositions in musical history. Perhaps no other works demonstrate so clearly that music is not an undisciplined outpouring on the part of the composer and merely a sensuous delight to the listener, but a mental art--an architecture of tone in which the composer's imagination is the blueprint, the whole world of sound the building material. Refuse to recognize this, and the last quartets are ascetic, unintelligible, repellent; recognize it, and they are a most glorious testimony of human accomplishment.
Attempts at musical description can only feebly suggest the technical means by which Beethoven achieved his ends in this work. We may describe the form of the movements: the first in sonata-allegro design, preceded and interrupted twice by a majestic chordal passage; the second a theme and five variations; the third a Scherzo in A-B-A-Coda form; the last a sonata-allegro movement with a coda based on a magically transformed version of the main theme. But perhaps even more to the point is a sentence of Vincent d'Indy in which he referred to the theme of the second movement: "He who does not perceive the radiant beauty of such a theme, and does not feel himself profoundly moved ... is truly unworthy of being called a musician." His words are applicable with equal significance to the quartet as a whole.