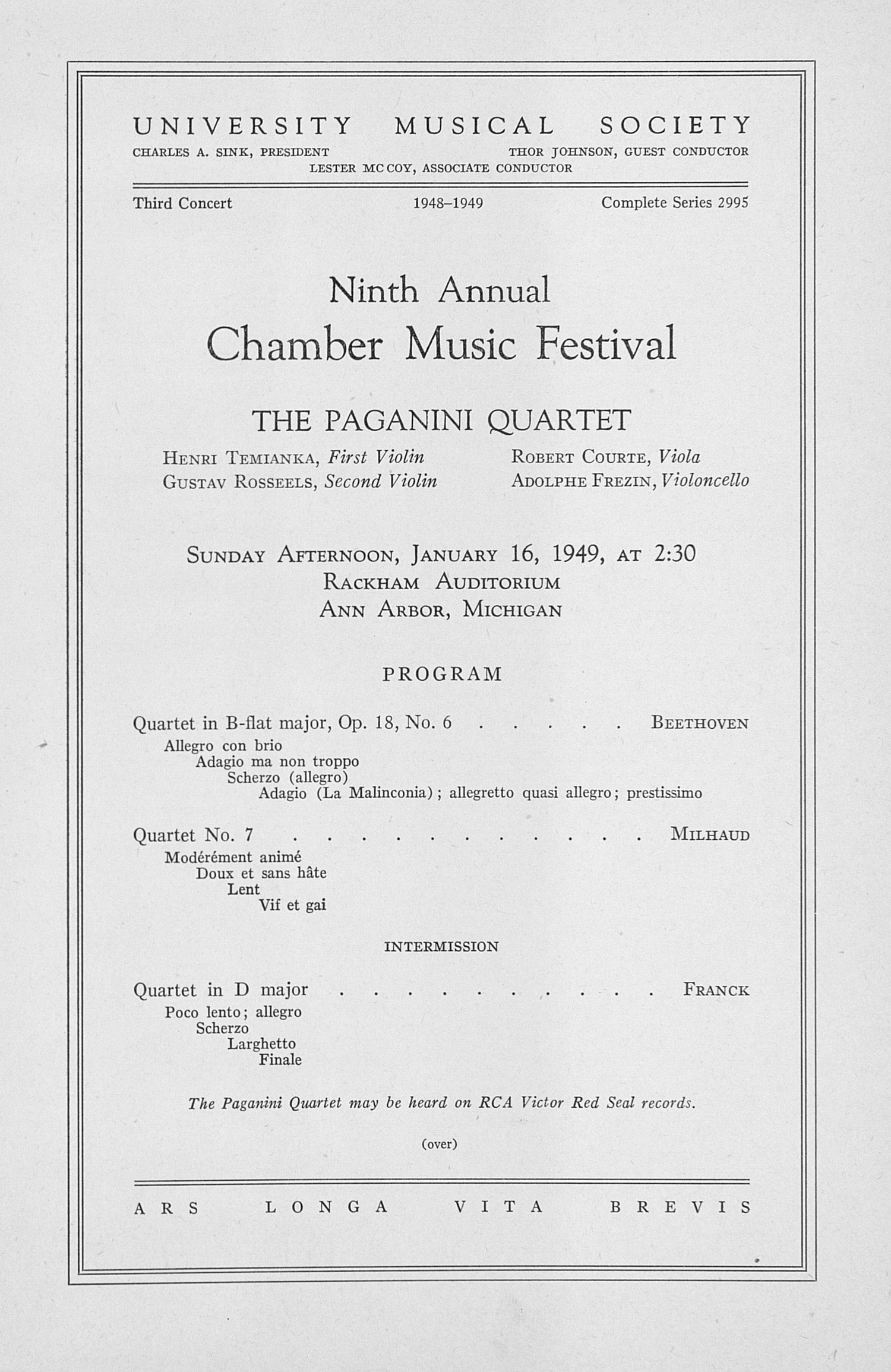 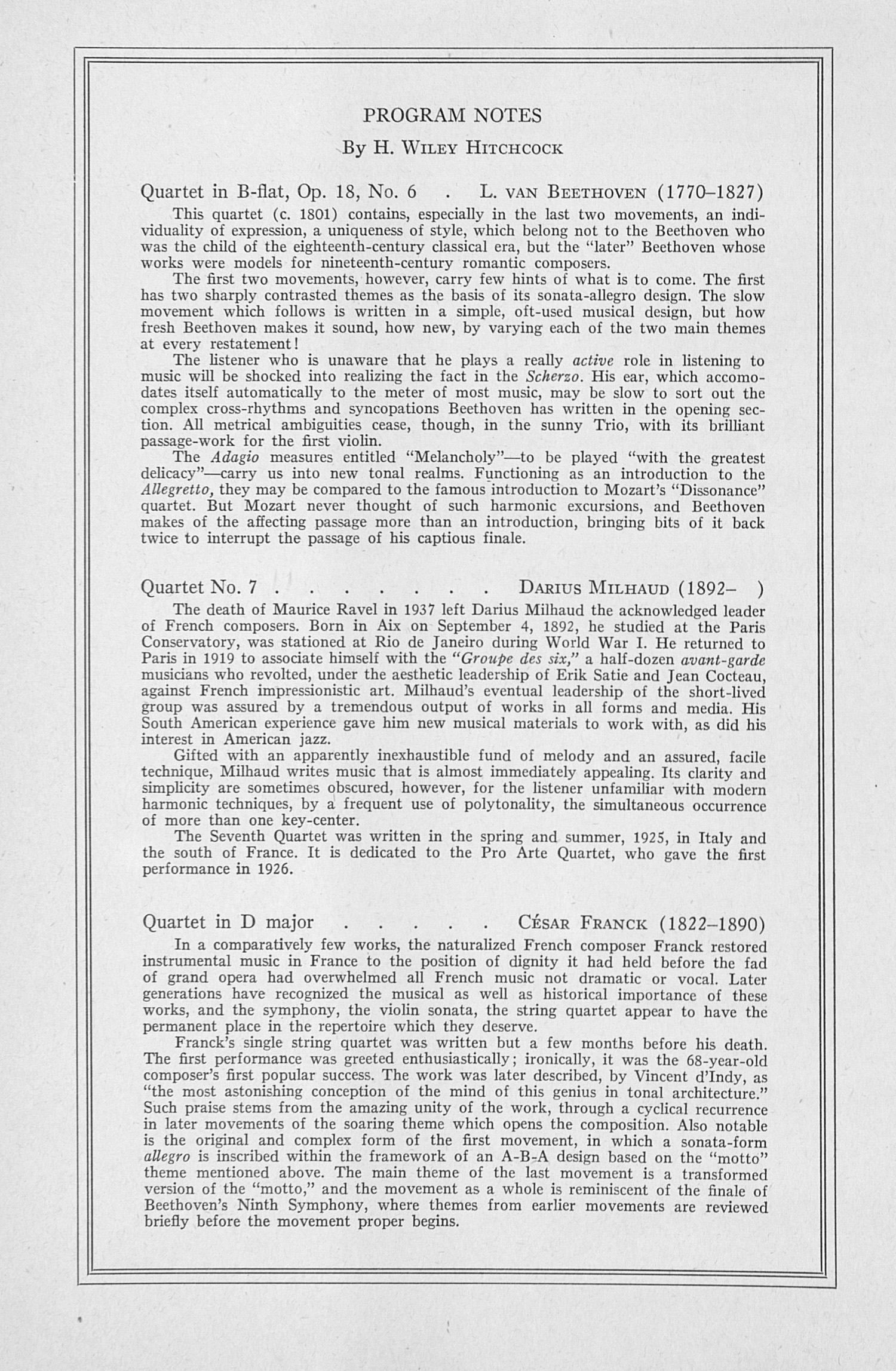 UNIVERSITY MUSICAL SOCIETY
CHARLES A. SINK, PRESIDENT THOR JOHNSON, GUEST CONDUCTOR
LESTER MCCOY, ASSOCIATE CONDUCTOR
Third Concert 1948-1949 Complete Series 299S
Ninth Annual
Chamber Music Festival
THE PAGANINI QUARTET
Henri Temianka, First Violin Robert Courte, Viola
Gustav Rosseels, Second Violin Adolphe Frezin, Violoncello
Sunday Afternoon, January 16, 1949, at 2:30 Rackham Auditorium Ann Arbor, Michigan
PROGRAM
Quartet in B-flat major, Op. 18, No. 6.....Beethoven
Allegro con brio
Adagio ma non troppo Scherzo (allegro)
Adagio (La Malinconia) ; allegretto quasi allegro; prestissimo
Quartet No. 7...........Milhaud
Moderement anime Doux et sans hate Lent
Vif et gai
INTERMISSION
Quartet in D major....... . . . Franck
Poco lento; allegro Scherzo
Larghetto Finale
The Paganini Quartet may be heard on RCA Victor Red Seal records.
(over)
ARS LONGA VITA BREVIS
PROGRAM NOTES By H. Wiley Hitchcock
Quartet in B-flat, Op. 18, No. 6 . L. van Beethoven (1770-1827)
This quartet (c. 1801) contains, especially in the last two movements, an individuality of expression, a uniqueness of style, which belong not to the Beethoven who was the child of the eighteenth-century classical era, but the "later" Beethoven whose works were models for nineteenth-century romantic composers.
The first two movements, however, carry few hints of what is to come. The first has two sharply contrasted themes as the basis of its sonata-allegro design. The slow movement which follows is written in a simple, oft-used musical design, but how fresh Beethoven makes it sound, how new, by varying each of the two main themes at every restatement!
The listener who is unaware that he plays a really active role in listening to music will be shocked into realizing the fact in the Scherzo. His ear, which accomodates itself automatically to the meter of most music, may be slow to sort out the complex cross-rhythms and syncopations Beethoven has written in the opening section. All metrical ambiguities cease, though, in the sunny Trio, with its brilliant passage-work for the first violin.
The Adagio measures entitled "Melancholy"--to be played "with the greatest delicacy"--carry us into new tonal realms. Functioning as an introduction to the Allegretto, they may be compared to the famous introduction to Mozart's "Dissonance" quartet. But Mozart never thought of such harmonic excursions, and Beethoven makes of the affecting passage more than an introduction, bringing bits of it back twice to interrupt the passage of his captious finale.
Quartet No. 7.......Darius Milhaud (1892)
The death of Maurice Ravel in 1937 left Darius Milhaud the acknowledged leader of French composers. Born in Aix on September 4, 1892, he studied at the Paris Conservatory, was stationed at Rio de Janeiro during World War I. He returned to Paris in 1919 to associate himself with the "Groupe des six," a half-dozen avant-garde musicians who revolted, under the aesthetic leadership of Erik Satie and Jean Cocteau, against French impressionistic art. Milhaud's eventual leadership of the short-lived group was assured by a tremendous output of works in all forms and media. His South American experience gave him new musical materials to work with, as did his interest in American jazz.
Gifted with an apparently inexhaustible fund of melody and an assured, facile technique, Milhaud writes music that is almost immediately appealing. Its clarity and simplicity are sometimes obscured, however, for the listener unfamiliar with modern harmonic techniques, by a frequent use of polytonality, the simultaneous occurrence of more than one key-center.
The Seventh Quartet was written in the spring and summer, 1925, in Italy and the south of France. It is dedicated to the Pro Arte Quartet, who gave the first performance in 1926.
Quartet in D major.....Cesar Feanck (1822-1890)
In a comparatively few works, the naturalized French composer Franck restored instrumental music in France to the position of dignity it had held before the fad of grand opera had overwhelmed all French music not dramatic or vocal. Later generations have recognized the musical as well as historical importance of these works, and the symphony, the violin sonata, the string quartet appear to have the permanent place in the repertoire which they deserve.
Franck's single string quartet was written but a few months before his death. The first performance was greeted enthusiastically; ironically, it was the 68-year-old composer's first popular success. The work was later described, by Vincent d'Indy, as "the most astonishing conception of the mind of this genius in tonal architecture." Such praise stems from the amazing unity of the work, through a cyclical recurrence in later movements of the soaring theme which opens the composition. Also notable is the original and complex form of the first movement, in which a sonata-form allegro is inscribed within the framework of an A-B-A design based on the "motto" theme mentioned above. The main theme of the last movement is a transformed version of the "motto," and the movement as a whole is reminiscent of the finale of Beethoven's Ninth Symphony, where themes from earlier movements are reviewed briefly before the movement proper begins.