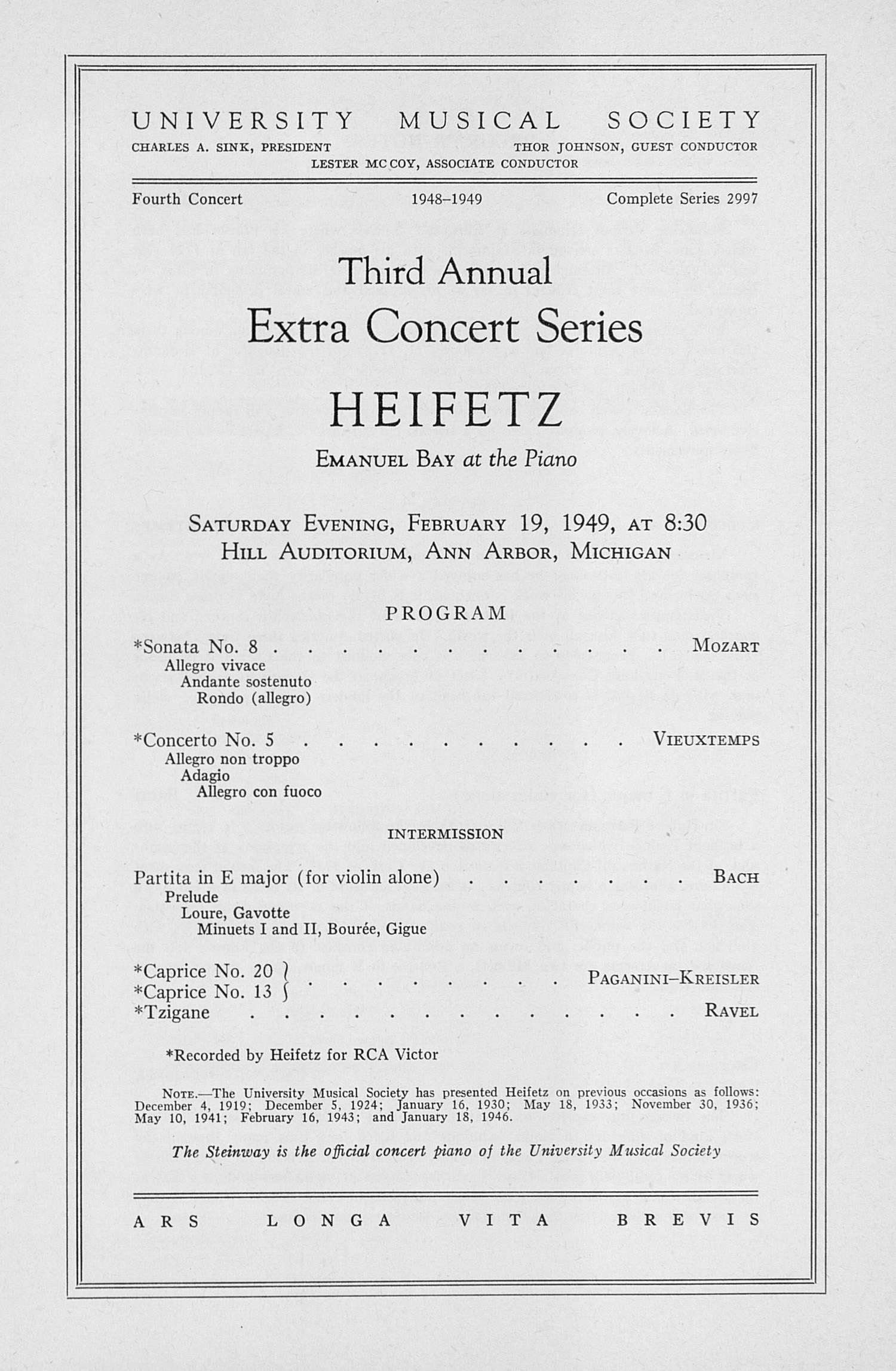 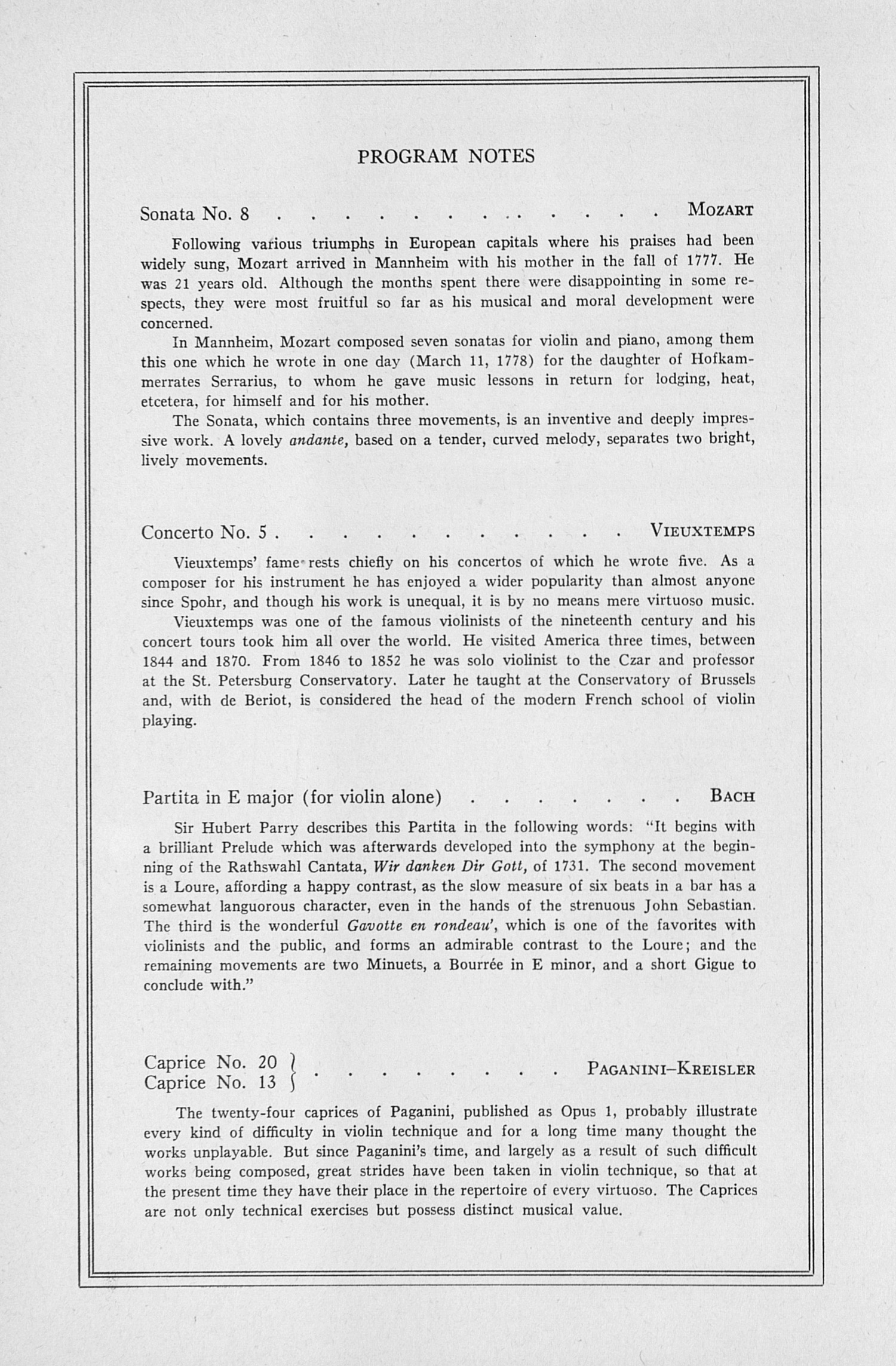 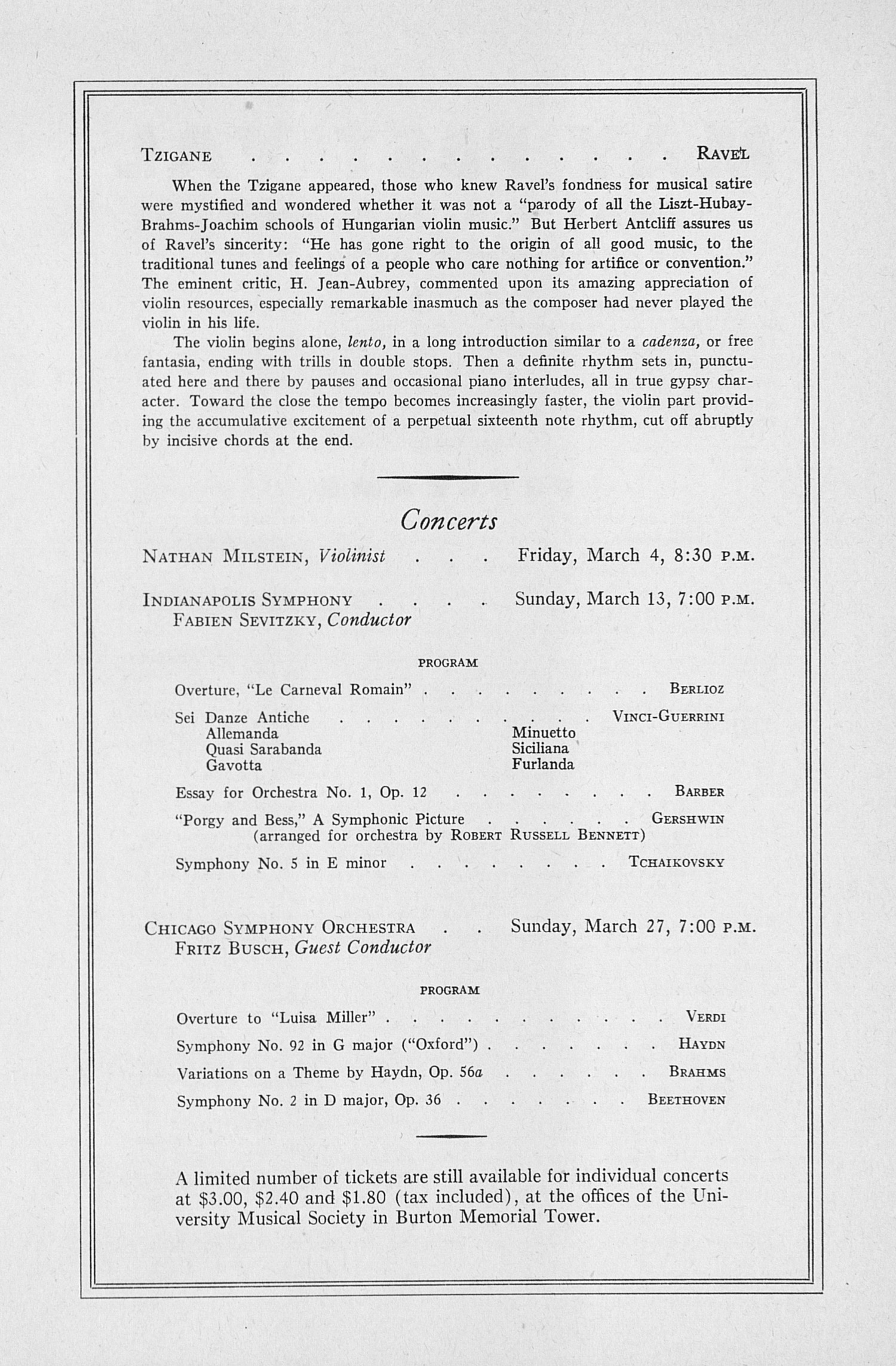 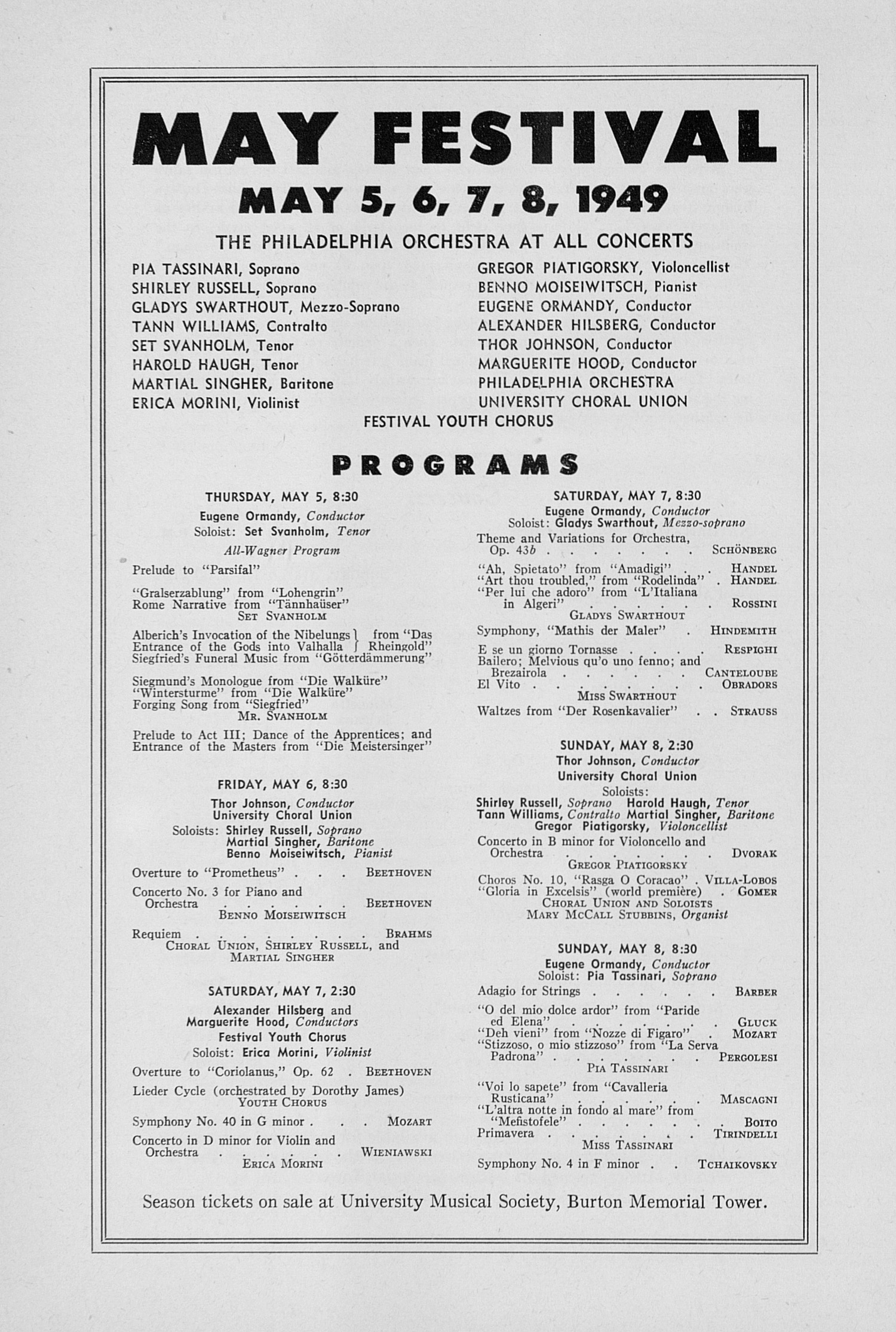 UNIVERSITY MUSICAL SOCIETY
CHARLES A. SINK, PRESIDENT THOR JOHNSON, GUEST CONDUCTOR
LESTER MCCOY, ASSOCIATE CONDUCTOR
Fourth Concert 1948-1949 Complete Series 2997
Third Annual
Extra Concert Series HEIFETZ
Emanuel Bay at the Piano Saturday Evening, February 19, 1949, at 8:30
HlLL AUDITORIUM, ANN ArBOR, MICHIGAN
PROGRAM
Sonata No. 8............Mozart
Allegro vivace Andante sostenuto Rondo (allegro)
?ConcertÃ³ No. 5..........Vieuxtemps
Allegro non troppo Adagio Allegro con fuoco
INTERMISSION
Partita in E major (for violin alone).......Bach
Prelude
Loure, Gavotte Minuets I and II, BourÃ©e, Gigue
Caprice No. 20 j........Paganini-Kreisler
Capnce No. 13
Tzigane.............Ravel
Recorded by Heifetz for RCA VÃ­ctor
Note.--The University Musical Society has presented Heifetz on previous occasions as follows: December 4, 1919; December 5, 1924; January 16, 1930; May 18, 1933; November 30, 1936; May 10, 1941; February 16, 1943; and January 18, 1946.
The Steinway is the oficial concert piano oÂ¡ the University Musical Society ARS LONGA VITA BREVIS
PROGRAM NOTES
Sonata No. 8.............Mozart
Following various triumphs in European capitals where his praises had been widely sung, Mozart arrived in Mannheim with his mother in the fall of 1777. He was 21 years oÃ­d. Although the months spent there were disappointing in some respects, they were most fruitful so far as his musical and moral development were concerned.
In Mannheim, Mozart composed seven sonatas for violin and piano, among them this one which he wrote in one day (March 11, 1778) for the daughter of Hofkammerrates Serrarius, to whom he gave music lessons in return Ã­or lodging, heat, etcÃ©tera, for himself and for his mother.
The Sonata, which contains three movements, is an inventive and deeply impressive work. A lovely andante, based on a tender, curved melody, separates two bright, lively movements.
ConcertÃ³ No. 5...........Vieuxtemps
Vieuxtemps' fame' rests chiefly on his concertos of which he wrote five. As a composer for his instrument he has enjoyed a wider popularity than almost anyone since Spohr, and though his work is unequal, it is by no means mere virtuoso music.
Vieuxtemps was one of the famous violinists of the nineteenth century and his concert tours took him all over the world. He visited America three times, between 1844 and 1870. From 1846 to 1852 he was solo violinist to the Czar and professor at the St. Petersburg Conservatory. Later he taught at the Conservatory of Brussels and, with de Beriot, is considered the head oÃ­ the modern French school of violin playing.
Partita in E major (for violin alone).......Bach
Sir Hubert Parry describes this Partita in the following words: "It begins with a brilliant Prelude which was afterwards developed into the symphony at the beginning of the Rathswahl Cantata, Wir danken Dir Gotl, of 1731. The second movement is a Loure, affording a happy contrast, as the slow measure of six beats in a bar has a somewhat languorous character, even in the hands of the strenuous John Sebastian. The third is the wonderful Gavotte en rondeau', which is one of the favorites with violinists and the public, and forms an admirable contrast to the Loure; and the remaining movements are two Minuets, a BourrÃ©e in E minor, and a short Gigue to conclude with."
Caprice No. 20 }........Paganini-Kreisler
Capnce No. 13
The twenty-four caprices of Paganini, published as Opus 1, probably Â¡IlÃºstrate every kind of difficulty in violin technique and for a long time many thought the works unplayable. But since Paganini's time, and largely as a result of such difficult works being composed, great strides have been taken in violin technique, so that at the present time they have their place in the repertoire of every virtuoso. The Caprices are not only technical exercises but possess distinct musical valuÃ©.
TZIGANE
When the Tzigane appeared, those who knew Ravel's fondness for musical satire were mystified and wondered whether it was not a "parody of all the Liszt-HubayBrahms-Joachim schools of Hungarian violin music." But Herbert Antcliff assures us of Ravel's sincerity: "He has gone right to the origin of all good music, to the traditional tunes and feelings of a people who care nothing for artÃ­fice or convention." The eminent critic, H. Jean-Aubrey, commented upon its amazing appreciation of violin resources, especially remarkable inasmuch as the composer had never played the violin in his Ufe.
The violin begins alone, lento, in a long introduction similar to a cadenza, or free fantasÃ­a, ending with trills in double stops. Then a deflnite rhythm sets in, punctuated here and there by pauses and occasional piano interludes, all in true gypsy character. Toward the ciÃ³se the tempo becomes increasingly faster, the violin part providing the accumulative excitement of a perpetual sixteenth note rhythm, cut off abruptly by indsive chords at the end.
Concerts
Nathan Milstein, Violinist . . . Friday, March 4, 8:30 p.m.
Indianapolis Symphony.....Sunday, March 13, 7:00 p.m.
Fabien Sevitzky, Conductor
PROGRAM
Overture, "Le Carneval Romain".........Berlioz
Sei Danze Antiche..........Vinci-Guerrini
Allemanda Minuetto
Quasi Sarabanda Siciliana
Gavotta Furlanda
Essay for Orchestra No. 1, Op. 12........Barber
"Porgy and Bess," A Symphonic Picture......Gershwin
(arranged for orchestra by Robert Russell Bennett)
Symphony No. 5 in E minor........Tchaikovsky
Chicago Symphony Orchestra . . Sunday, March 27, 7:00 p.m. Fritz Busch, Guest Conductor
PROGRAM
Overture to "Luisa Miller"........... Verdi
Symphony No. 92 in G major ("Oxford").......Haydn
Variations on a Theme by Haydn, Op. 56a......Brahms
Symphony No. 2 in D major, Op. 36...... . Beethoven
A limited number of tickets are still available for individual concerts at $3.00, $2.40 and $1.80 (tax included), at the offices of the University Musical Society in Burton Memorial Tower.
MAY FESTIVAL
MAY 5, 6, 7, 8, 1949
THE PHILADELPHIA ORCHESTRA AT ALL CONCERTS
PÃ