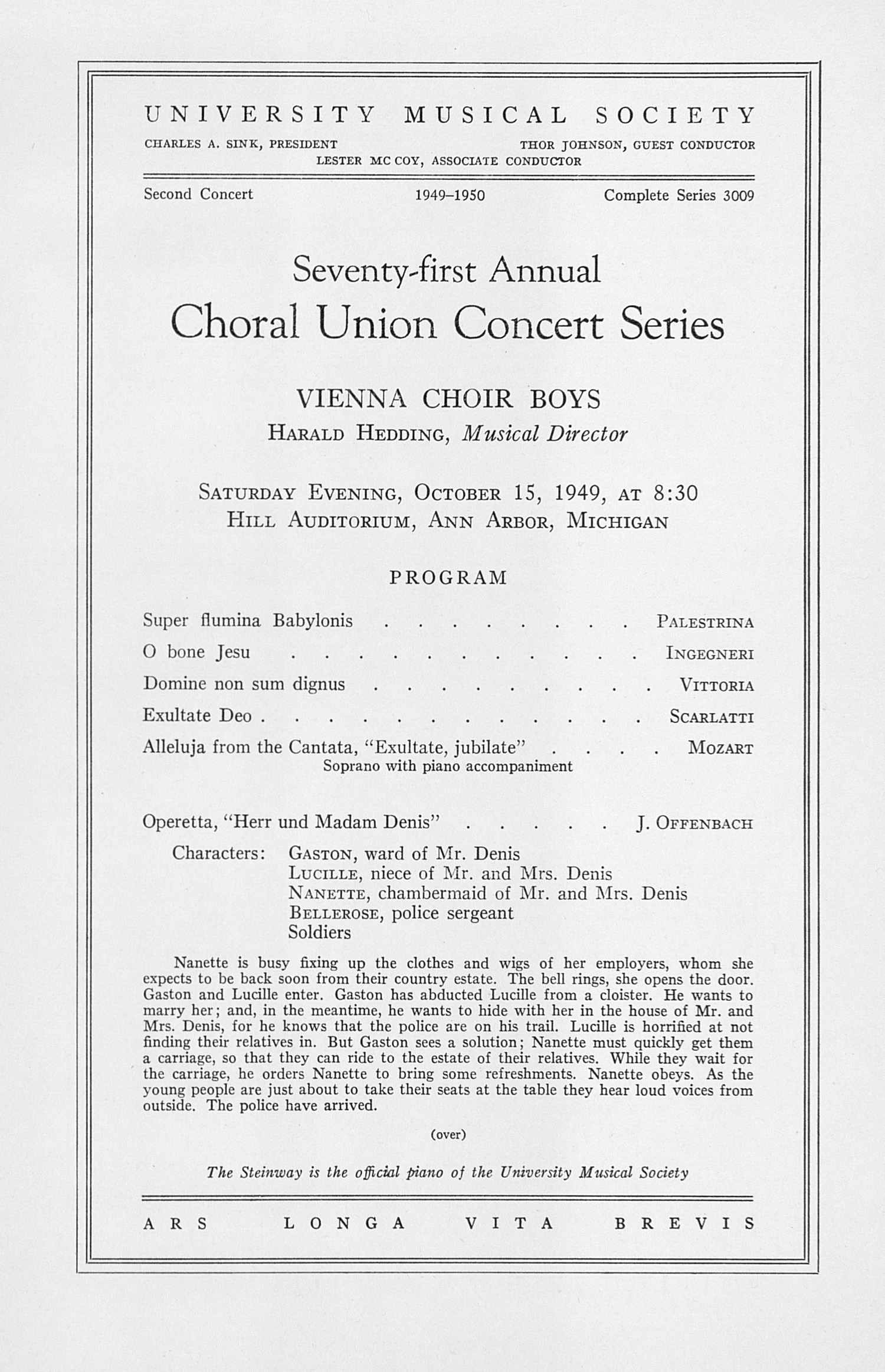 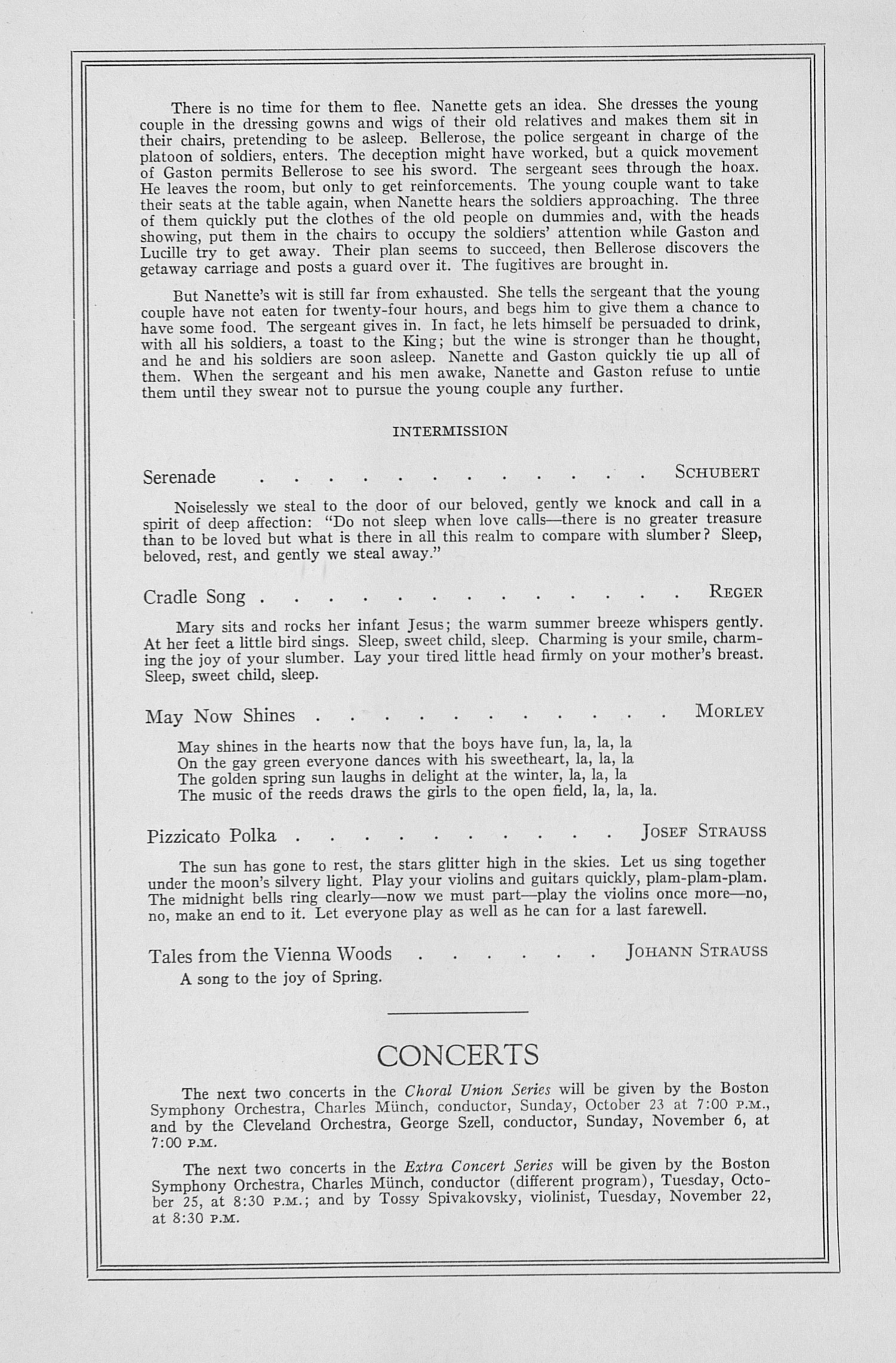 UNIVERSITY MUSICAL SOCIETY
CHARLES A. SINK, PRESIDENT THOR JOHNSON, GUEST CONDUCTOR
LESTER MC COY, ASSOCIATE CONDUCTOR
Second Concert 1949-1950 Complete Series 3009
Seventy-first Annual
Choral Union Concert Series
VIENNA CHOIR BOYS
Harald Hedding, Musical Director
Saturday Evening, October IS, 1949, at 8:30 Hill Auditorium, Ann Arbor, Michigan
PROGRAM
Super flumina Babylonis........Palestrina
O bone Jesu...........Ingegneei
Domine non sum dignus.........Vittoria
Exultate Deo............Scarlatti
Alleluja from the Cantata, "Exultate, jubilate" .... Mozart Soprano with piano accompaniment
Operetta, "Herr und Madam Denis".....J. Offenbach
Characters: Gaston, ward of Mr. Denis
Lucille, niece of Mr. and Mrs. Denis Nanette, chambermaid of Mr. and Mrs. Denis Bellerose, police sergeant Soldiers
Nanette is busy fixing up the clothes and wigs of her employers, whom she expects to be back soon from their country estate. The bell rings, she opens the door. Gaston and Lucille enter. Gaston has abducted Lucille from a cloister. He wants to marry her; and, in the meantime, he wants to hide with her in the house of Mr. and Mrs. Denis, for he knows that the police are on his trail. Lucille is horrified at not finding their relatives in. But Gaston sees a solution; Nanette must quickly get them a carriage, so that they can ride to the estate of their relatives. While they wait for the carriage, he orders Nanette to bring some refreshments. Nanette obeys. As the young people are just about to take their seats at the table they hear loud voices from outside. The police have arrived.
(over) The Steinway is the official piano of the University Musical Society
ARS LONGA VITA BREVIS
There is no time for them to flee. Nanette gets an idea. She dresses the young couple in the dressing gowns and wigs of their old relatives and makes them sit in their chairs, pretending to be asleep. Bellerose, the police sergeant in charge of the platoon of soldiers, enters. The deception might have worked, but a quick movement of Gaston permits Bellerose to see his sword. The sergeant sees through the hoax. He leaves the room, but only to get reinforcements. The young couple want to take their seats at the table again, when Nanette hears the soldiers approaching. The three of them quickly put the clothes of the old people on dummies and, with the heads showing, put them in the chairs to occupy the soldiers' attention while Gaston and Lucille try to get away. Their plan seems to succeed, then Bellerose discovers the getaway carriage and posts a guard over it. The fugitives are brought in.
But Nanette's wit is still far from exhausted. She tells the sergeant that the young couple have not eaten for twenty-four hours, and begs him to give them a chance to have some food. The sergeant gives in. In fact, he lets himself be persuaded to drink, with all his soldiers, a toast to the King; but the wine is stronger than he thought, and he and his soldiers are soon asleep. Nanette and Gaston quickly tie up all of them. When the sergeant and his men awake, Nanette and Gaston refuse to untie them until they swear not to pursue the young couple any further.
INTERMISSION
Serenade............ Schubert
Noiselessly we steal to the door of our beloved, gently we knock and call in a spirit of deep affection: "Do not sleep when love calls--there is no greater treasure than to be loved but what is there in all this realm to compare with slumber Sleep, beloved, rest, and gently we steal away."
Cradle Song.............Reger
Mary sits and rocks her infant Jesus; the warm summer breeze whispers gently. At her feet a little bird sings. Sleep, sweet child, sleep. Charming is your smile, charming the joy of your slumber. Lay your tired little head firmly on your mother's breast. Sleep, sweet child, sleep.
May Now Shines...........Morley
May shines in the hearts now that the boys have fun, la, la, la On the gay green everyone dances with his sweetheart, la, la, la The golden spring sun laughs in delight at the winter, la, la, la The music of the reeds draws the girls to the open field, la, la, la.
Pizzicato Polka..........Josef Strauss
The sun has gone to rest, the stars glitter high in the skies. Let us sing together under the moon's silvery light. Play your violins and guitars quickly, plam-plam-plam. The midnight bells ring clearly--now we must part--play the violins once more--no, no, make an end to it. Let everyone play as well as he can for a last farewell.
Tales from the Vienna Woods......Johann Strauss
A song to the joy of Spring.
CONCERTS
The next two concerts in the Choral Union Series will be given by the Boston Symphony Orchestra, Charles Munch, conductor, Sunday, October 23 at 7:00 p.m., and by the Cleveland Orchestra, George Szell, conductor, Sunday, November 6, at 7:00 P.M.
The next two concerts in the Extra Concert Series will be given by the Boston Symphony Orchestra, Charles Munch, conductor (different program), Tuesday, October 25, at 8:30 p.m.; and by Tossy Spivakovsky, violinist, Tuesday, November 22, at 8:30 p.m.