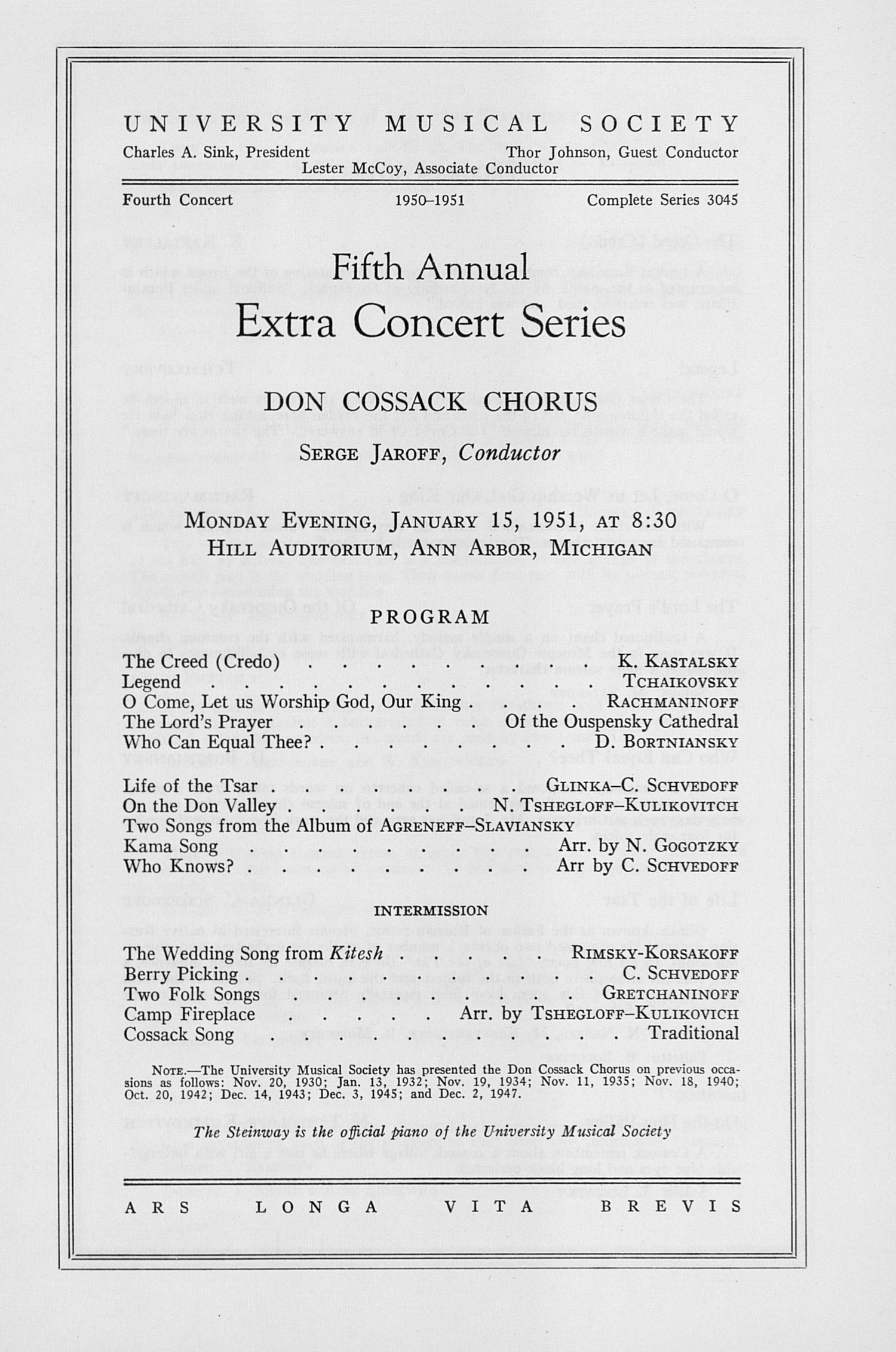 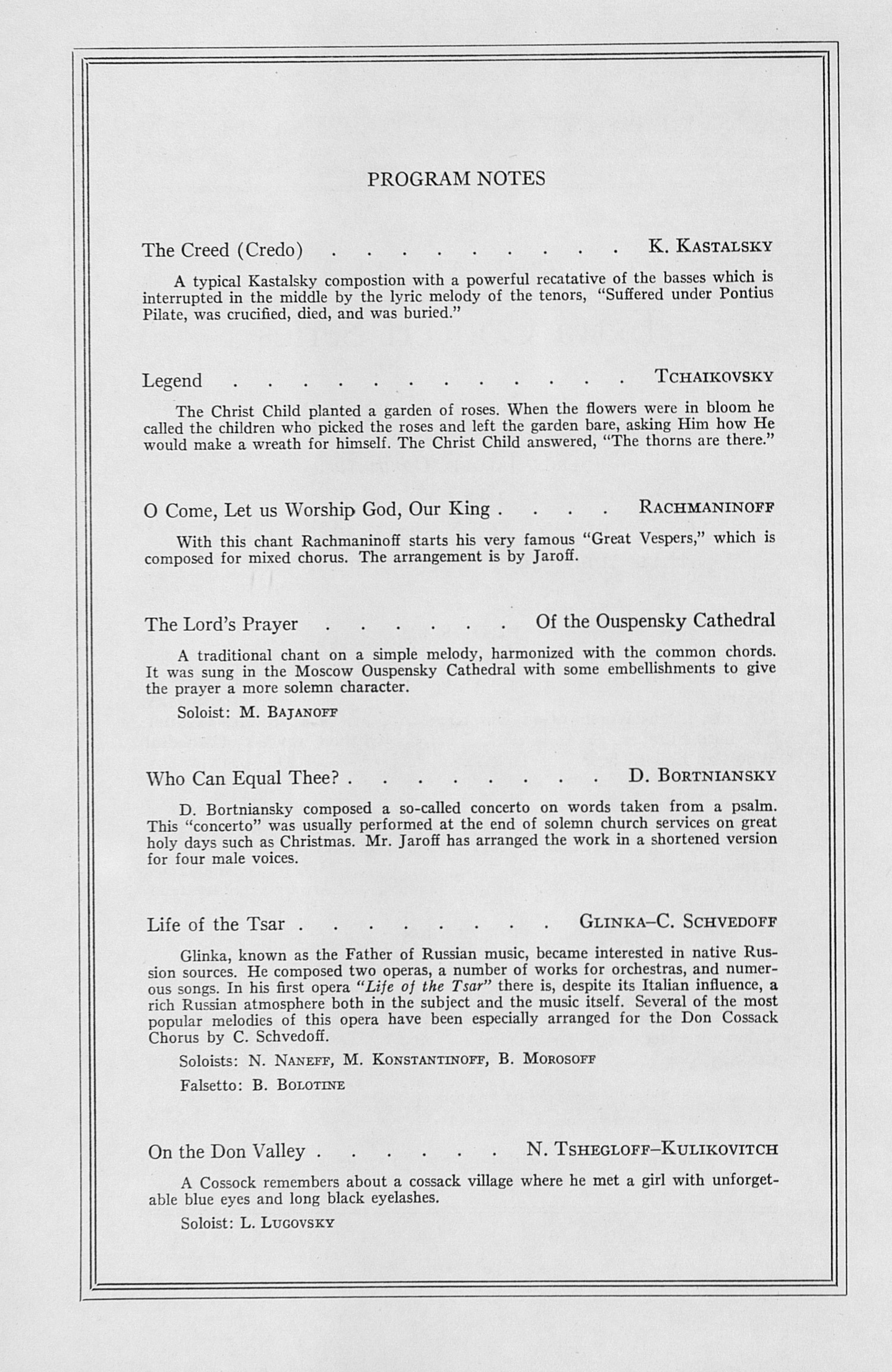 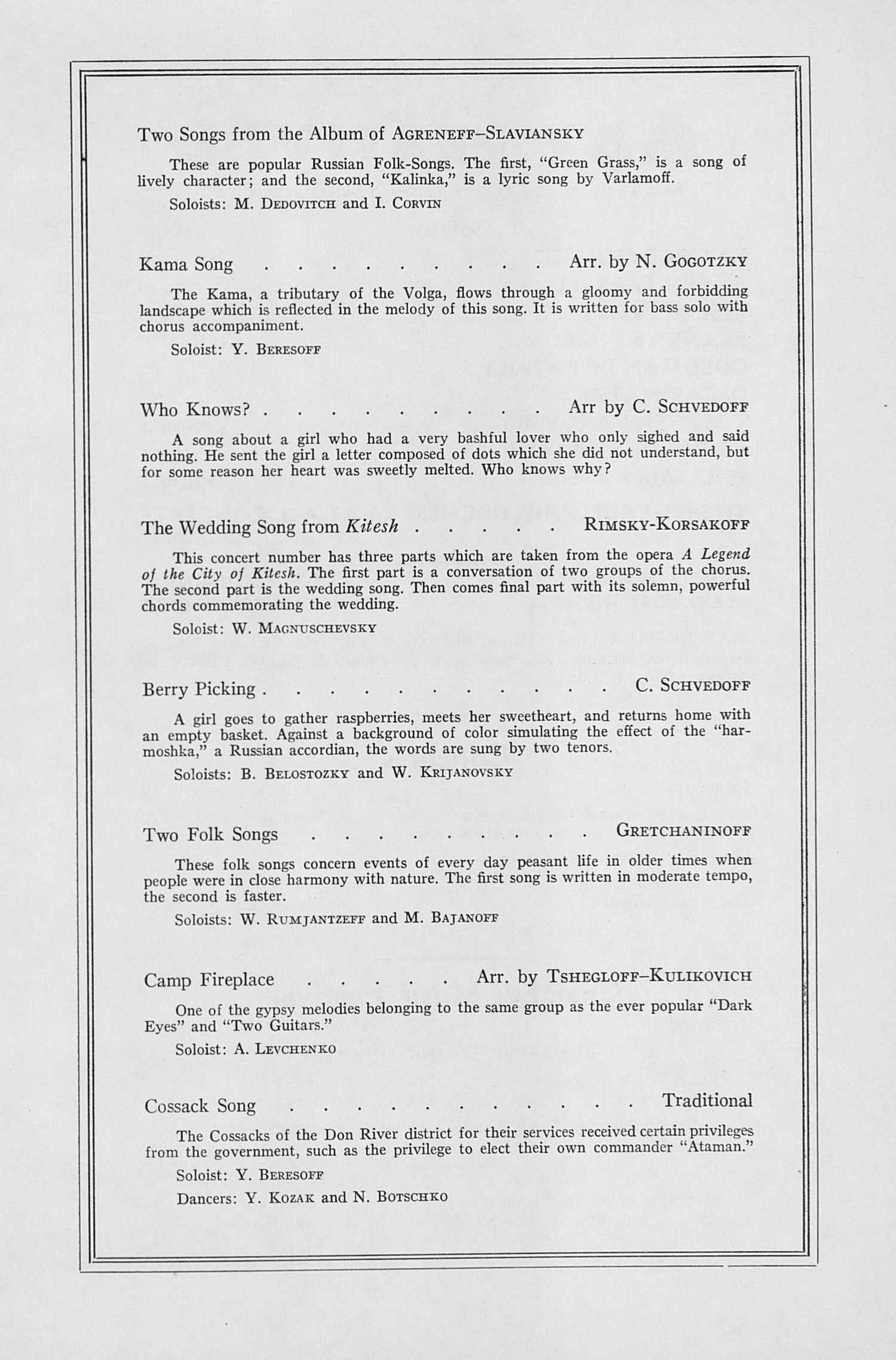 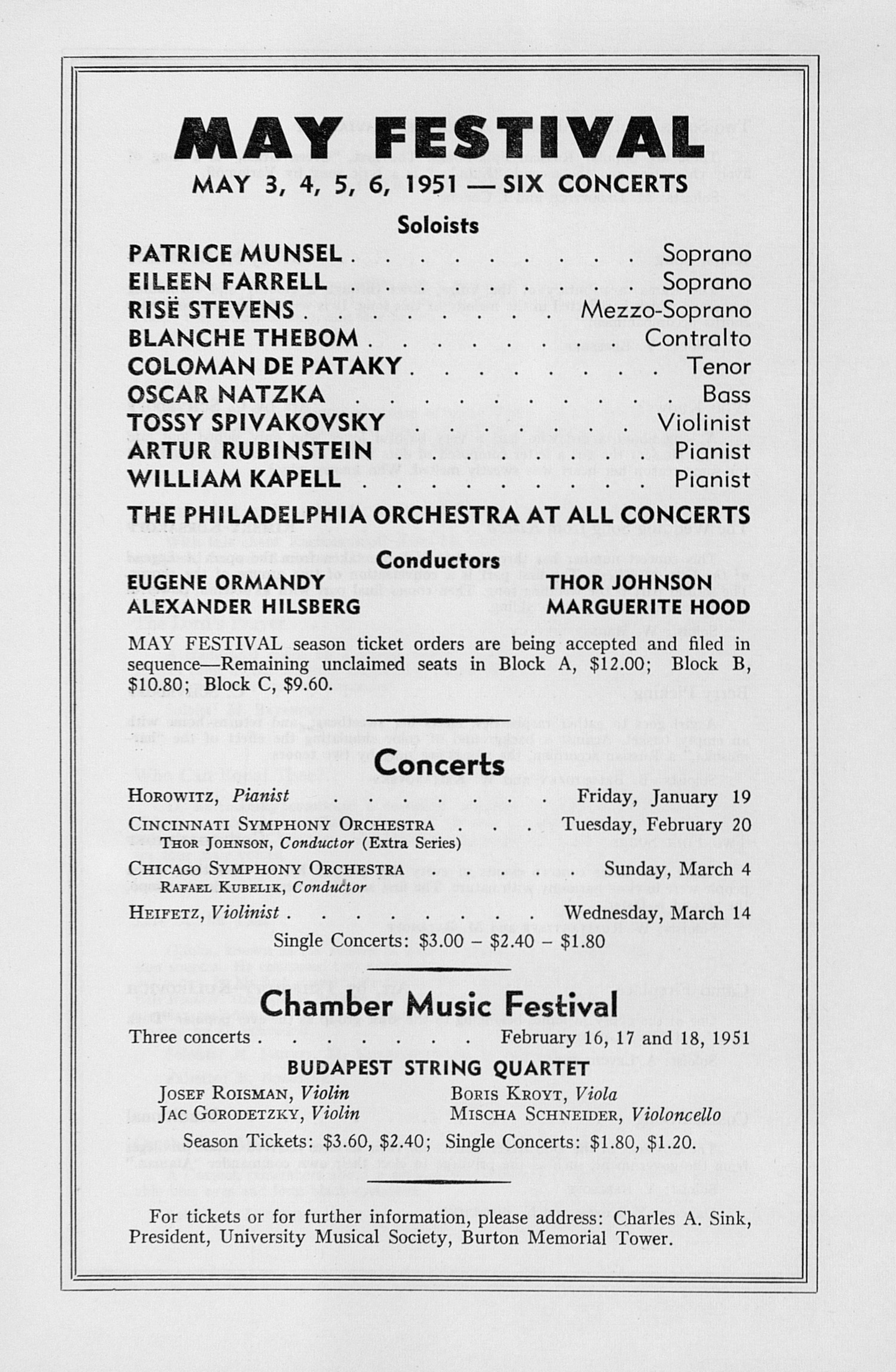 UNIVERSITY MUSICAL SOCIETY
Charles A. Sink, President
Thor Johnson, Guest Conductor
Lester McCoy, Associate Conductor
Fourth Concert
1950-1951
Complete Series 3045
Fifth Annual
Extra Concert Series
DON COSSACK CHORUS
Serge Jaroff, Conductor
Monday Evening, January 15, 1951, at 8:30 Hill Auditorium, Ann Arbor, Michigan
PROGRAM
The Creed (Credo).........K. Kastalsky
Legend............Tchaikovsky
O Come, Let us Worship God, Our King .... Rachmaninoff
The Lord's Prayer......Of the Ouspensky Cathedral
Who Can Equal Thee........D. Bortniansky
Life of the Tsar........Glinka-C. Schvedoff
On the Don Valley......N. Tshegloff-Kulikovitch
Two Songs from the Album of Agreneff-Slaviansky
Kama Song.........Arr. by N. Gogotzky
Who Knows.........Arr by C. Schvedoff
INTERMISSION
The Wedding Song from Kitesh.....Rimsky-Korsakoff
Berry Picking...........C. Schvedoff
Two Folk Songs.........Gretchaninoff
Camp Fireplace.....Arr. by Tshegloff-Kulikovich
Cossack Song...........Traditional
Note.--The University Musical Society has presented the Don Cossack Chorus on previous occasions as follows: Nov. 20, 1930; Jan. 13, 1932; Nov. 19, 1934; Nov. 11, 1935; Nov. 18, 1940; Oct. 20, 1942; Dec. 14, 1943; Dec. 3, 1945; and Dec. 2, 1947.
The Steinway is the official piano of the University Musical Society ARS LONGA VITA BREVIS
PROGRAM NOTES
The Creed (Credo).........K. Kastalsky
A typical Kastalsky compostion with a powerful recatative of the basses which is interrupted in the middle by the lyric melody of the tenors, "Suffered under Pontius Pilate, was crucified, died, and was buried."
Legend............Tchaikovsky
The Christ Child planted a garden of roses. When the flowers were in bloom he called the children who picked the roses and left the garden bare, asking Him how He would make a wreath for himself. The Christ Child answered, "The thorns are there."
O Come, Let us Worship God, Our King .... Rachmaninoff
With this chant Rachmaninoff starts his very famous "Great Vespers," which is composed for mixed chorus. The arrangement is by Jaroff.
The Lord's Prayer......Of the Ouspensky Cathedral
A traditional chant on a simple melody, harmonized with the common chords. It was sung in the Moscow Ouspensky Cathedral with some embellishments to give the prayer a more solemn character.
Soloist: M. Bajanoff
Who Can Equal Thee........D. Bortniansky
D. Bortniansky composed a so-called concerto on words taken from a psalm. This "concerto" was usually performed at the end of solemn church services on great holy days such as Christmas. Mr. Jaroff has arranged the work in a shortened version for four male voices.
Life of the Tsar........Glinka-C. Schvedoff
Glinka, known as the Father of Russian music, became interested in native Russion sources. He composed two operas, a number of works for orchestras, and numerous songs. In his first opera "Lije oj the Tsar" there is, despite its Italian influence, a rich Russian atmosphere both in the subject and the music itself. Several of the most popular melodies of this opera have been especially arranged for the Don Cossack Chorus by C. Schvedoff.
Soloists: N. Naneff, M. Konstantinofp, B. Morosoft Falsetto: B. Bolottne
On the Don Valley......N. Tshegloff-Kulikovitch
A Cossock remembers about a cossack village where he met a girl with unforgetable blue eyes and long black eyelashes.
Soloist: L. Lugovsky
Two Songs from the Album of Agreneff-Slavtansky
These are popular Russian Folk-Songs. The first, "Green Grass," is a song of lively character; and the second, "Kalinka," is a lyric song by Varlamoff.
Soloists: M. Dedovitch and I. Corvin
Kama Song.........Arr. by N. Gogotzky
The Kama, a tributary of the Volga, flows through a gloomy and forbidding landscape which is reflected in the melody of this song. It is written for bass solo with chorus accompaniment.
Soloist: Y. Beresoff
Who Knows.........Arr by C. Schvedoff
A song about a girl who had a very bashful lover who only sighed and said nothing. He sent the girl a letter composed of dots which she did not understand, but for some reason her heart was sweetly melted. Who knows why
The Wedding Song from Kitesh.....Rimsky-Korsakoff
This concert number has three parts which are taken from the opera A Legend of the City of Kitesh. The first part is a conversation of two groups of the chorus. The second part is the wedding song. Then comes final part with its solemn, powerful chords commemorating the wedding.
Soloist: W. Magnuschevsky
Berry Picking...........C. Schvedoff
A girl goes to gather raspberries, meets her sweetheart, and returns home with an empty basket. Against a background of color simulating the effect of the "harmoshka," a Russian accordian, the words are sung by two tenors.
Soloists: B. Belostozky and W. Krijanovsky
Two Folk Songs.........Gretchaninoff
These folk songs concern events of every day peasant life in older times when people were in close harmony with nature. The first song is written in moderate tempo, the second is faster.
Soloists: W. Rumjantzeff and M. Bajanoff
Camp Fireplace.....Arr. by Tshegloff-Kulikovich
One of the gypsy melodies belonging to the same group as the ever popular "Dark Eyes" and "Two Guitars."
Soloist: A. Levchenko
Cossack Song...........Traditional
The Cossacks of the Don River district for their services received certain privileges from the government, such as the privilege to elect their own commander "Ataman."
Soloist: Y. Beresoff
Dancers: Y. Kozak and N. Botschko
MAY FESTIVAL
MAY 3, 4, 5, 6, 1951 --SIX CONCERTS
Soloists
PATRICE MUNSEL.........Soprano
EILEEN FARRELL.........Soprano
RISE STEVENS........Mezzo-Soprano
BLANCHE THEBOM........Contralto
COLOMAN DE PATAKY........Tenor
OSCAR NATZKA..........Bass
TOSSY SPIVAKOVSKY.......Violinist
ARTUR RUBINSTEIN........Pianist
WILLIAM KAPELL.........Pianist
THE PHILADELPHIA ORCHESTRA AT ALL CONCERTS
Conductors
EUGENE ORMANDY ALEXANDER HILSBERG
THOR JOHNSON MARGUERITE HOOD
MAY FESTIVAL season ticket orders are being accepted and filed in sequence--Remaining unclaimed seats in Block A, $12.00; Block B, $10.80; Block C, $9.60.
Concerts
Horowitz, Pianist.......Friday, January 19
Cincinnati Symphony Orchestra . . . Tuesday, February 20 Thor Johnson, Conductor (Extra Series)
Chicago Symphony Orchestra.....Sunday, March 4
Rafael Kubelik, Conductor
Heifetz, Violinist........Wednesday, March 14
Single Concerts: $3.00 $2.40 $1.80
Chamber Music Festival
Three concerts.......February 16, 17 and 18, 1951
BUDAPEST STRING QUARTET
Josef Roisman, Violin Jac Goeodetzky, Violin
Boeis Keoyt, Viola
Mischa Schneider, Violoncello
Season Tickets: $3.60, $2.40; Single Concerts: $1.80, $1.20.
For tickets or for further information, please address: Charles A. Sink, j President, University Musical Society, Burton Memorial Tower. i