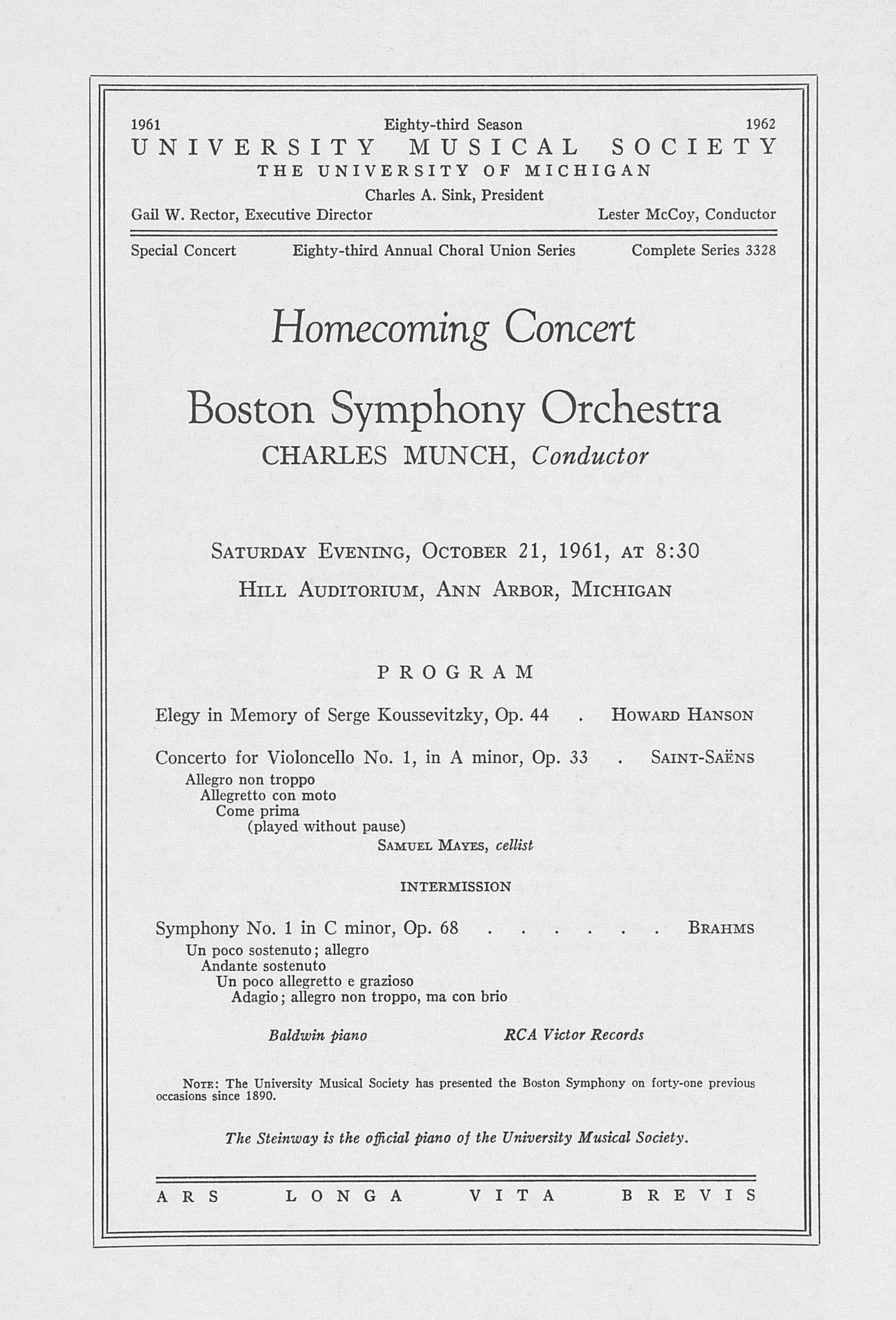 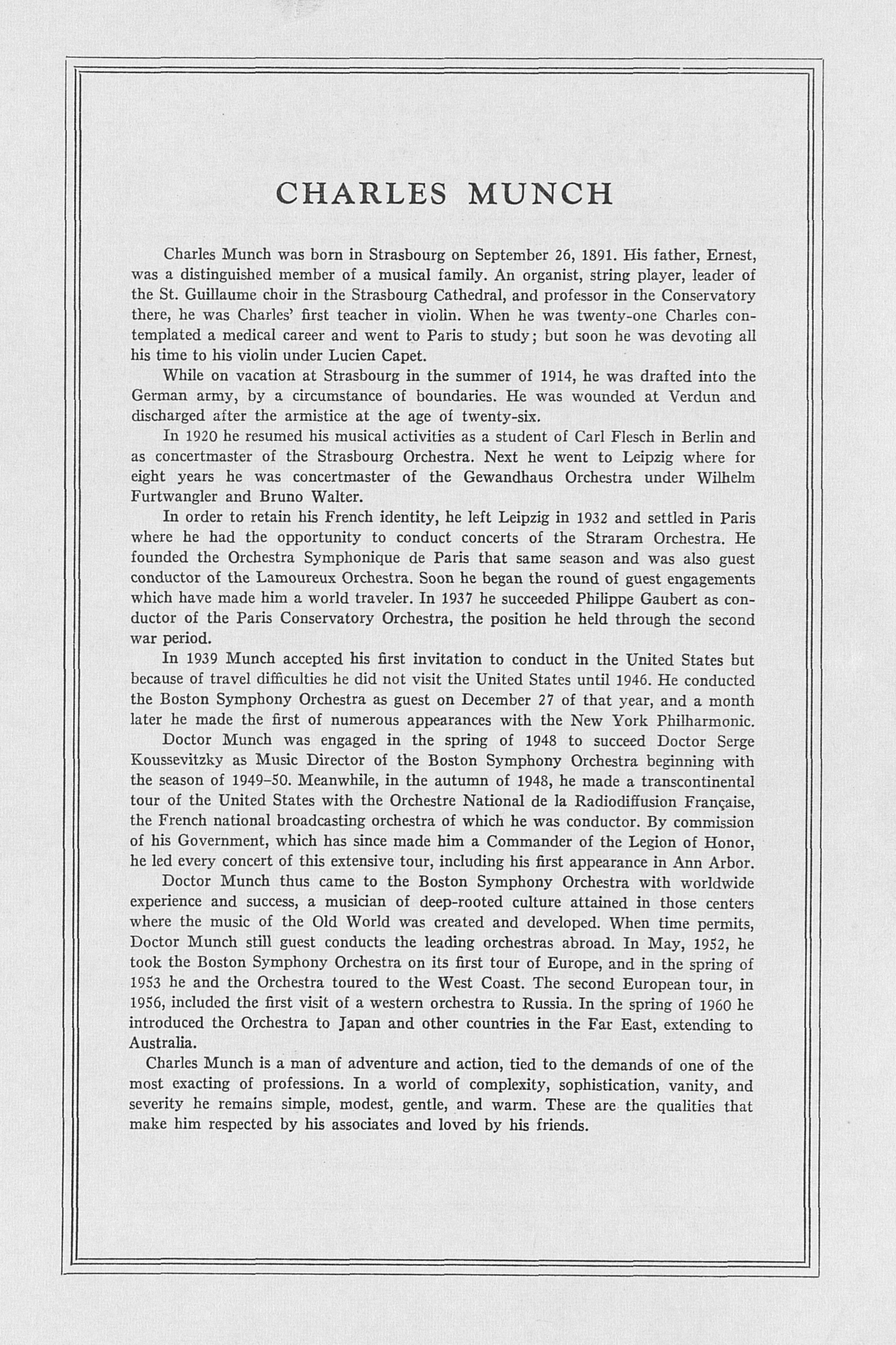 1961 Eighty-third Season 1962
UNIVERSITY MUSICAL SOCIETY
THE UNIVERSITY OF MICHIGAN
Charles A. Sink, President Gail W. Rector, Executive Director Lester McCoy, Conductor
Special Concert Eighty-third Annual Choral Union Series Complete Series 3328
Homecoming Concert Boston Symphony Orchestra
CHARLES MUNCH, Conductor
Saturday Evening, October 21, 1961, at 8:30 Hill Auditorium, Ann Arbor, Michigan
PROGRAM
Elegy in Memory of Serge Koussevitzky, Op. 44 . Howard Hanson
Concerto for Violoncello No. 1, in A minor, Op. 33 . Saint-Saens
Allegro non troppo Allegretto con moto Come prima
(played without pause)
Samuel Mayes, cellist
INTERMISSION
Symphony No. 1 in C minor, Op. 68......Brahms
Un poco sostenuto; allegro Andante sostenuto Un poco allegretto e grazioso Adagio; allegro non troppo, ma con brio
Baldwin piano RCA Victor Records
Note: The University Musical Society has presented the Boston Symphony on forty-one previous occasions since 1890.
The Steinway is the official piano o) the University Musical Society. ARS LONGA VITA BREVIS
CHARLES MUNCH
Charles Munch was born in Strasbourg on September 26, 1891. His father, Ernest, was a distinguished member of a musical family. An organist, string player, leader of the St. Guillaume choir in the Strasbourg Cathedral, and professor in the Conservatory there, he was Charles' first teacher in violin. When he was twenty-one Charles con?templated a medical career and went to Paris to study; but soon he was devoting all his time to his violin under Lucien Capet.
While on vacation at Strasbourg in the summer of 1914, he was drafted into the German army, by a circumstance of boundaries. He was wounded at Verdun and discharged after the armistice at the age of twenty-six.
In 1920 he resumed his musical activities as a student of Carl Flesch in Berlin and as concertmaster of the Strasbourg Orchestra. Next he went to Leipzig where for eight years he was concertmaster of the Gewandhaus Orchestra under Wilhelm Furtwangler and Bruno Walter.
In order to retain his French identity, he left Leipzig in 1932 and settled in Paris where he had the opportunity to conduct concerts of the Straram Orchestra. He founded the Orchestra Symphonique de Paris that same season and was also guest conductor of the Lamoureux Orchestra. Soon he began the round of guest engagements which have made him a world traveler. In 1937 he succeeded Philippe Gaubert as con?ductor of the Paris Conservatory Orchestra, the position he held through the second war period.
In 1939 Munch accepted his first invitation to conduct in the United States but because of travel difficulties he did not visit the United States until 1946. He conducted the Boston Symphony Orchestra as guest on December 27 of that year, and a month later he made the first of numerous appearances with the New York Philharmonic.
Doctor Munch was engaged in the spring of 1948 to succeed Doctor Serge Koussevitzky as Music Director of the Boston Symphony Orchestra beginning with the season of 1949-SO. Meanwhile, in the autumn of 1948, he made a transcontinental tour of the United States with the Orchestre National de la Radiodiffusion Francaise, the French national broadcasting orchestra of which he was conductor. By commission of his Government, which has since made him a Commander of the Legion of Honor, he led every concert of this extensive tour, including his first appearance in Ann Arbor.
Doctor Munch thus came to the Boston Symphony Orchestra with worldwide experience and success, a musician of deep-rooted culture attained in those centers where the music of the Old World was created and developed. When time permits, Doctor Munch still guest conducts the leading orchestras abroad. In May, 1952, he took the Boston Symphony Orchestra on its first tour of Europe, and in the spring of 1953 he and the Orchestra toured to the West Coast. The second European tour, in 1956, included the first visit of a western orchestra to Russia. In the spring of 1960 he introduced the Orchestra to Japan and other countries in the Far East, extending to Australia.
Charles Munch is a man of adventure and action, tied to the demands of one of the most exacting of professions. In a world of complexity, sophistication, vanity, and severity he remains simple, modest, gentle, and warm. These are the qualities that make him respected by his associates and loved by his friends.