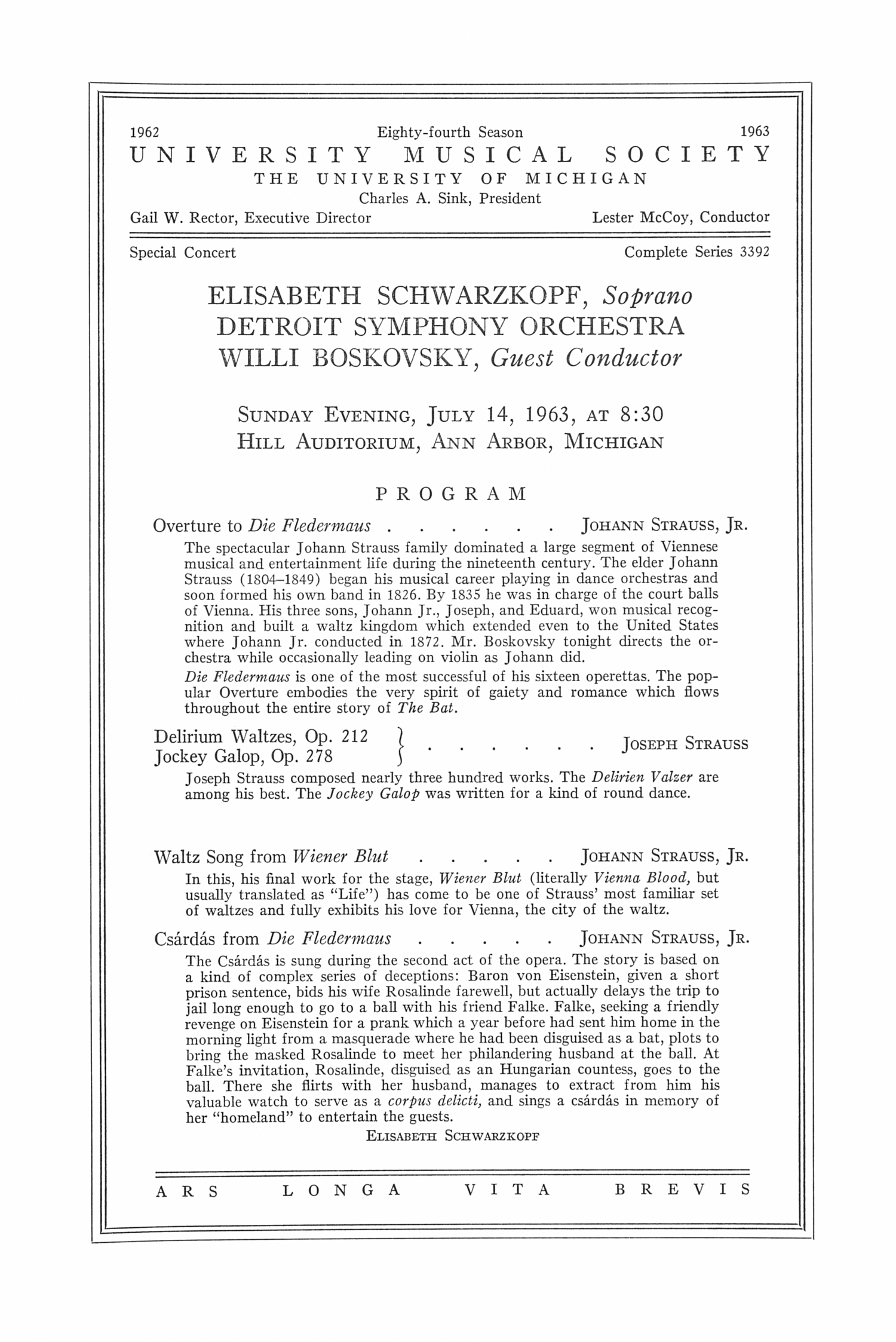 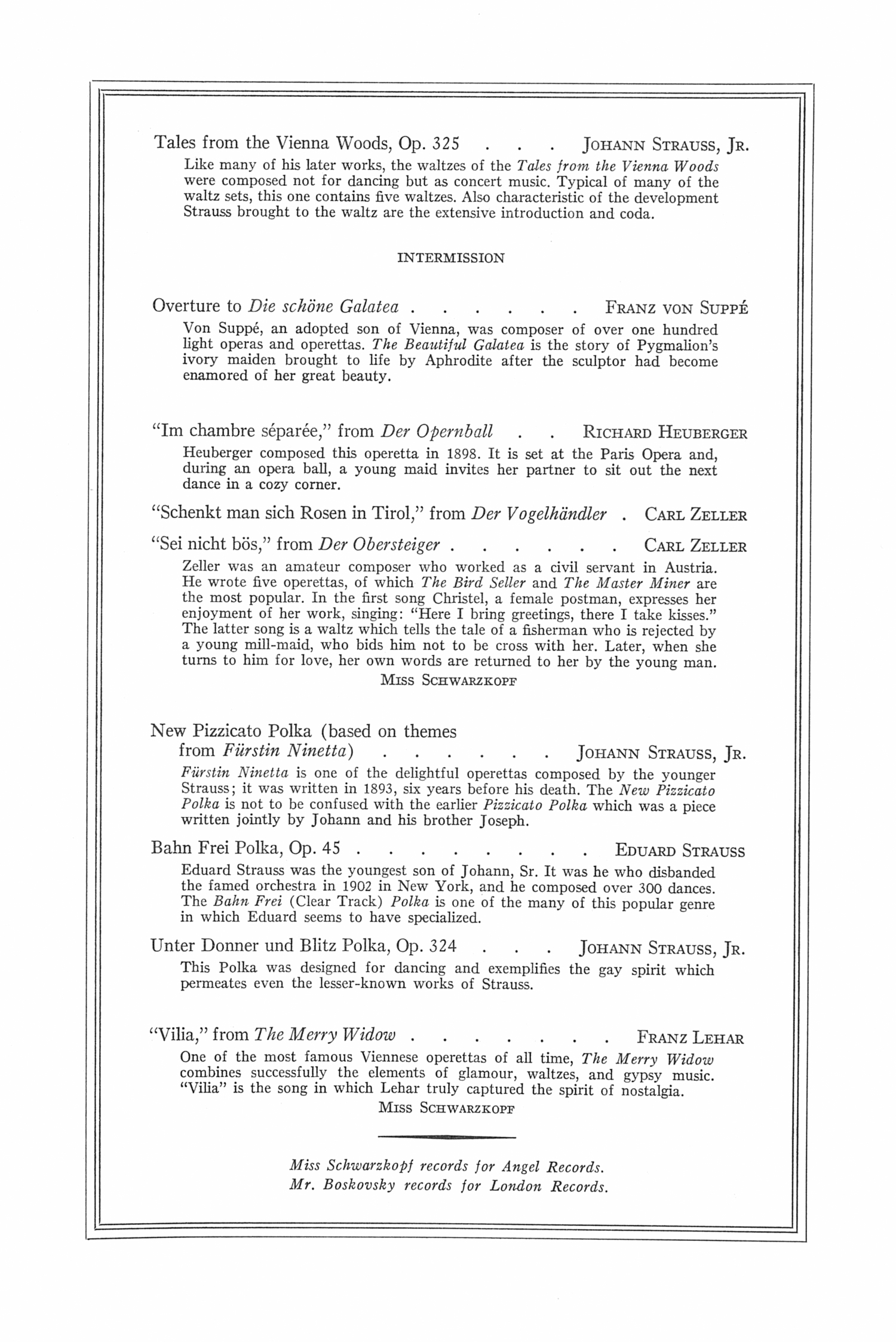 1962 Eighty-fourth Season 1963
UNIVERSITY MUSICAL SOCIETY
THE UNIVERSITY OF MICHIGAN
Charles A. Sink, President Gail W. Rector, Executive Director Lester McCoy, Conductor
Special Concert Complete Series 3392
ELISABETH SCHWARZKOPF, Soprano DETROIT SYMPHONY ORCHESTRA WILLI BOSKOVSKY, Guest Conductor
Sunday Evening, July 14, 1963, at 8:30 Hill Auditorium, Ann Arbor, Michigan
PROGRAM
Overture to Die Fledermaus......Johann Strauss, Jr.
The spectacular Johann Strauss family dominated a large segment of Viennese musical and entertainment life during the nineteenth century. The elder Johann Strauss (1804-1849) began his musical career playing in dance orchestras and soon formed his own band in 1826. By 1835 he was in charge of the court balls of Vienna. His three sons, Johann Jr., Joseph, and Eduard, won musical recog?nition and built a waltz kingdom which extended even to the United States where Johann Jr. conducted in 1872. Mr. Boskovsky tonight directs the or?chestra while occasionally leading on violin as Johann did. Die Fledermaiis is one of the most successful of his sixteen operettas. The pop?ular Overture embodies the very spirit of gaiety and romance which flows throughout the entire story of The Bat.
Delirium Waltzes, Op. 212 1......Joseph Strauss
Jockey Galop, Op. 278 J J
Joseph Strauss composed nearly three hundred works. The Delirien Valzer are among his best. The Jockey Galop was written for a kind of round dance.
Waltz Song from Wiener Bint.....Johann Strauss, Jr.
In this, his final work for the stage, Wiener Blut (literally Vienna Blood, but usually translated as "Life") has come to be one of Strauss' most familiar set of waltzes and fully exhibits his love for Vienna, the city of the waltz.
Csardas from Die Fledermaus.....Johann Strauss, Jr.
The Csardas is sung during the second act of the opera. The story is based on a kind of complex series of deceptions: Baron von Eisenstein, given a short prison sentence, bids his wife Rosalinde farewell, but actually delays the trip to jail long enough to go to a ball with his friend Falke. Falke, seeking a friendly revenge on Eisenstein for a prank which a year before had sent him home in the morning light from a masquerade where he had been disguised as a bat, plots to bring the masked Rosalinde to meet her philandering husband at the ball. At Falke's invitation, Rosalinde, disguised as an Hungarian countess, goes to the ball. There she flirts with her husband, manages to extract from him his valuable watch to serve as a corpus delicti, and sings a csardas in memory of her "homeland" to entertain the guests.
Elisabeth Schwarzkopf
ARS LONGA VITA BREVIS
Tales from the Vienna Woods, Op. 325 . . . Johann Strauss, Jr.
Like many of his later works, the waltzes of the Tales from the Vienna Woods were composed not for dancing but as concert music. Typical of many of the waltz sets, this one contains five waltzes. Also characteristic of the development Strauss brought to the waltz are the extensive introduction and coda.
INTERMISSION
Overture to Die schone Galatea......Franz von Suppe
Von Suppe, an adopted son of Vienna, was composer of over one hundred light operas and operettas. The Beautiful Galatea is the story of Pygmalion's ivory maiden brought to life by Aphrodite after the sculptor had become enamored of her great beauty.
"Im chambre separee," from Der Opcrnball . . Richard Heuberger
Heubcrger composed this operetta in 1898. It is set at the Paris Opera and, during an opera ball, a young maid invites her partner to sit out the next dance in a cozy corner.
"Schenkt man sich Rosen in Tirol," from Der Vogelhdndler . Carl Zeller
"Sei nicht bos," from Der Obersteiger......Carl Zeller
Zeller was an amateur composer who worked as a civil servant in Austria. He wrote five operettas, of which The Bird Seller and The Master Miner are the most popular. In the first song Christel, a female postman, expresses her enjoyment of her work, singing: "Here I bring greetings, there I take kisses." The latter song is a waltz which tells the tale of a fisherman who is rejected by a young mill-maid, who bids him not to be cross with her. Later, when she turns to him for love, her own words are returned to her by the young man. Miss Schwarzkopf
New Pizzicato Polka (based on themes
from Fiirstin Ninetta)......Johann Strauss, Jr.
Furslin Ninetta is one of the delightful operettas composed by the younger Strauss; it was written in 1893, six years before his death. The New Pizzicato Polka is not to be confused with the earlier Pizzicato Polka which was a piece written jointly by Johann and his brother Joseph.
Bahn Frei Polka, Op. 45........Eduard Strauss
Eduard Strauss was the youngest son of Johann, Sr. It was he who disbanded the famed orchestra in 1902 in New York, and he composed over 300 dances. The Bahn Frei (Clear Track) Polka is one of the many of this popular genre in which Eduard seems to have specialized.
Unter Donner und Blitz Polka, Op. 324 . . . Johann Strauss, Jr.
This Polka was designed for dancing and exemplifies the gay spirit which permeates even the lesser-known works of Strauss.
"Vilia," from The Merry Widow.......Franz Lehar
One of the most famous Viennese operettas of all time, The Merry Widow combines successfully the elements of glamour, waltzes, and gypsy music. "Vilia" is the song in which Lehar truly captured the spirit of nostalgia. Miss Schwarzkopf
Miss Schwarzkopf records for Angel Records. Mr. Boskovsky records for London Records.