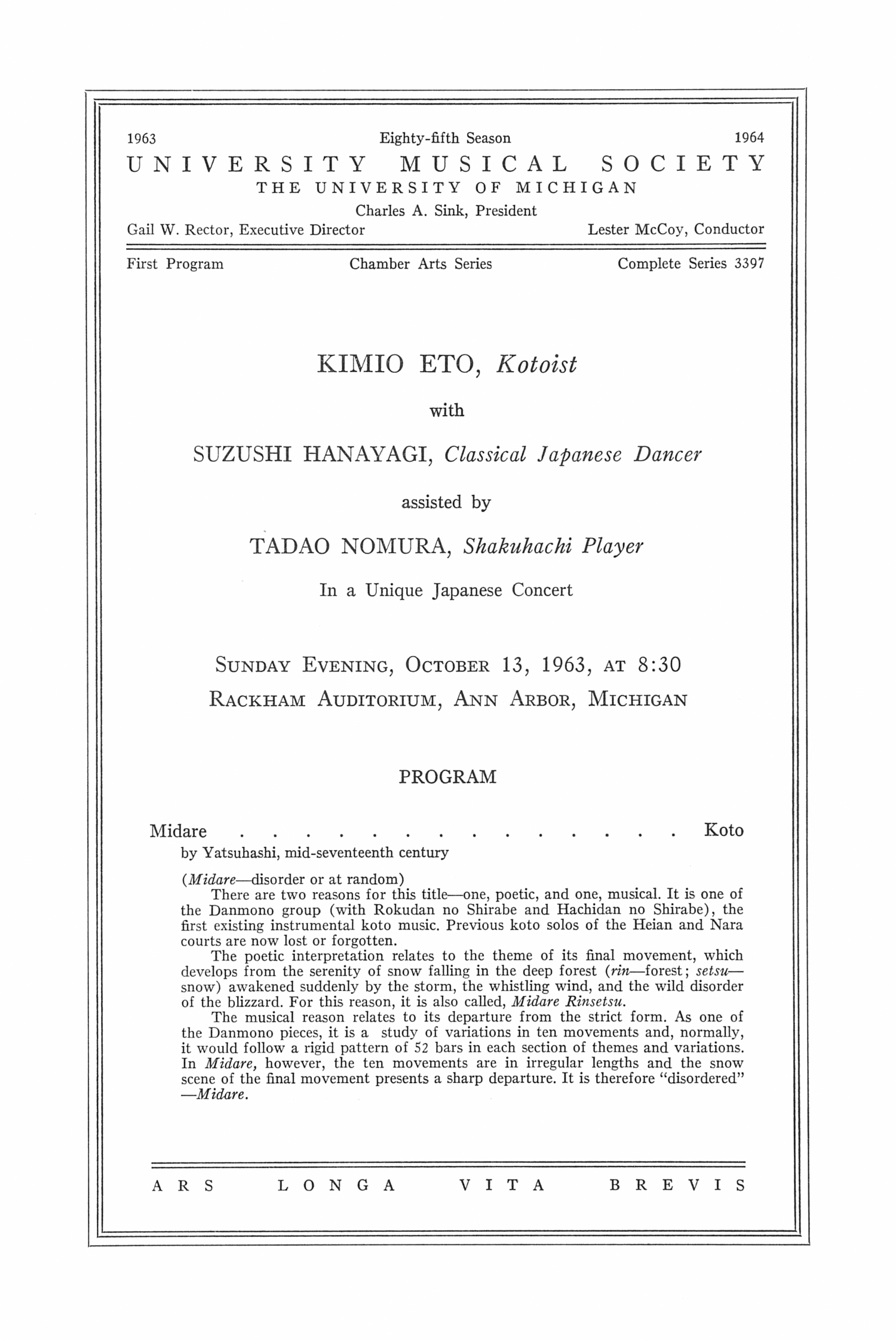 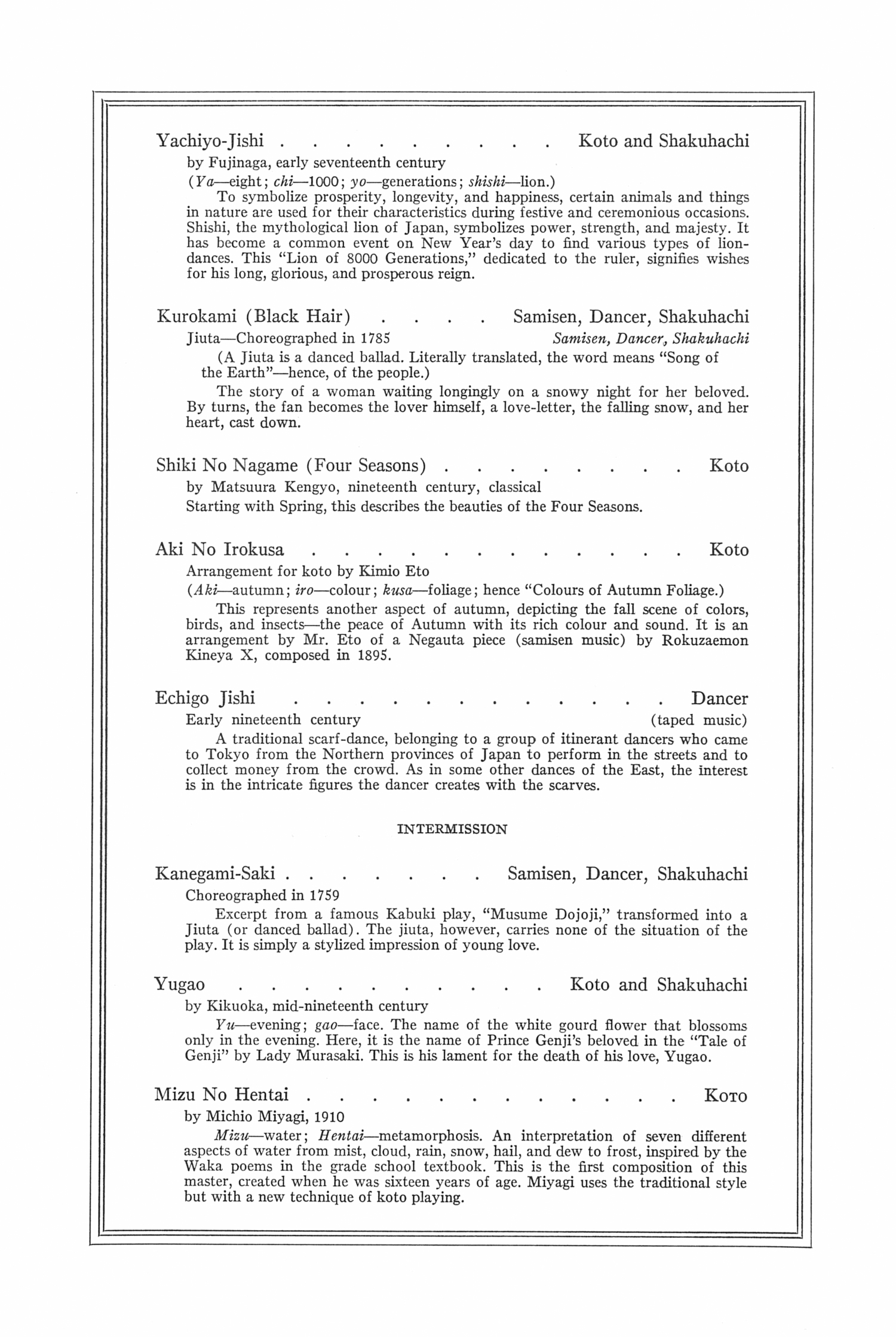 1963 Eighty-fifth Season 1964
UNIVERSITY MUSICAL SOCIETY
THE UNIVERSITY OF MICHIGAN
Charles A. Sink, President Gail VV. Rector, Executive Director Lester McCoy, Conductor
First Program Chamber Arts Series Complete Series 3397
KIMIO ETO, Kotoist
with SUZUSHI HANAYAGI, Classical Japanese Dancer
assisted by
TADAO NOMURA, Shakuhachi Player In a Unique Japanese Concert
Sunday Evening, October 13, 1963, at 8:30 Rackham Auditorium, Ann Arbor, Michigan
PROGRAM
Midare..............Koto
by Yatsuhashi, mid-seventeenth century
(Midare--disorder or at random)
There are two reasons for this title--one, poetic, and one, musical. It is one of the Danmono group (with Rokudan no Shirabe and Hachidan no Shirabe), the first existing instrumental koto music. Previous koto solos of the Heian and Nara courts are now lost or forgotten.
The poetic interpretation relates to the theme of its final movement, which develops from the serenity of snow falling in the deep forest (rin--forest; setsu-snow) awakened suddenly by the storm, the whistling wind, and the wild disorder of the blizzard. For this reason, it is also called, Midare Rinsetsu.
The musical reason relates to its departure from the strict form. As one of the Danmono pieces, it is a study of variations in ten movements and, normally, it would follow a rigid pattern of 52 bars in each section of themes and variations. In Midare, however, the ten movements are in irregular lengths and the snow scene of the final movement presents a sharp departure. It is therefore "disordered" --Midare.
ARS LONGA VITA BREVIS
Yachiyo-Jishi.........Koto and Shakuhachi
by Fujinaga, early seventeenth century
(Ya--eight; chi--1000; yo--generations; shishi--lion.)
To symbolize prosperity, longevity, and happiness, certain animals and things in nature are used for their characteristics during festive and ceremonious occasions. Shishi, the mythological lion of Japan, symbolizes power, strength, and majesty. It has become a common event on New Year's day to find various types of lion-dances. This "Lion of 8000 Generations," dedicated to the ruler, signifies wishes for his long, glorious, and prosperous reign.
Kurokami (Black Hair) .... Samisen, Dancer, Shakuhachi Jiuta--Choreographed in 1785 Samisen, Dancer, Shakulnirhi
(A Jiuta is a danced ballad. Literally translated, the word means "Song of the Earth"--hence, of the people.)
The story of a woman waiting longingly on a snowy night for her beloved. By turns, the fan becomes the lover himself, a love-letter, the falling snow, and her heart, cast down.
Shiki No Nagame (Four Seasons)........Koto
by Matsuura Kengyo, nineteenth century, classical
Starting with Spring, this describes the beauties of the Four Seasons.
Aki No Irokusa............Koto
Arrangement for koto by Kimio Eto
(Aki--autumn; iro--colour; kusa--foliage; hence "Colours of Autumn Foliage.)
This represents another aspect of autumn, depicting the fall scene of colors, birds, and insects--the peace of Autumn with its rich colour and sound. It is an arrangement by Mr. Eto of a Negauta piece (samisen music) by Rokuzaemon Kineya X, composed in 189S.
Echigo Jishi............Dancer
Early nineteenth century (taped music)
A traditional scarf-dance, belonging to a group of itinerant dancers who came to Tokyo from the Northern provinces of Japan to perform in the streets and to collect money from the crowd. As in some other dances of the East, the interest is in the intricate figures the dancer creates with the scarves.
INTERMISSION
Kanegami-Saki.......Samisen, Dancer, Shakuhachi
Choreographed in 17S9
Excerpt from a famous Kabuki play, "Musume Dojoji," transformed into a Jiuta (or danced ballad). The jiuta, however, carries none of the situation of the play. It is simply a stylized impression of young love.
Yugao..........Koto and Shakuhachi
by Kikuoka, mid-nineteenth century
Yu--evening; gao--face. The name of the white gourd flower that blossoms only in the evening. Here, it is the name of Prince Genji's beloved in the "Tale of Genji" by Lady Murasaki. This is his lament for the death of his love, Yugao.
Mizu No Hentai............Koto
by Michio Miyagi, 1910
Mizu--water; Hentai--metamorphosis. An interpretation of seven different aspects of water from mist, cloud, rain, snow, hail, and dew to frost, inspired by the Waka poems in the grade school textbook. This is the first composition of this master, created when he was sixteen years of age. Miyagi uses the traditional style but with a new technique of koto playing.