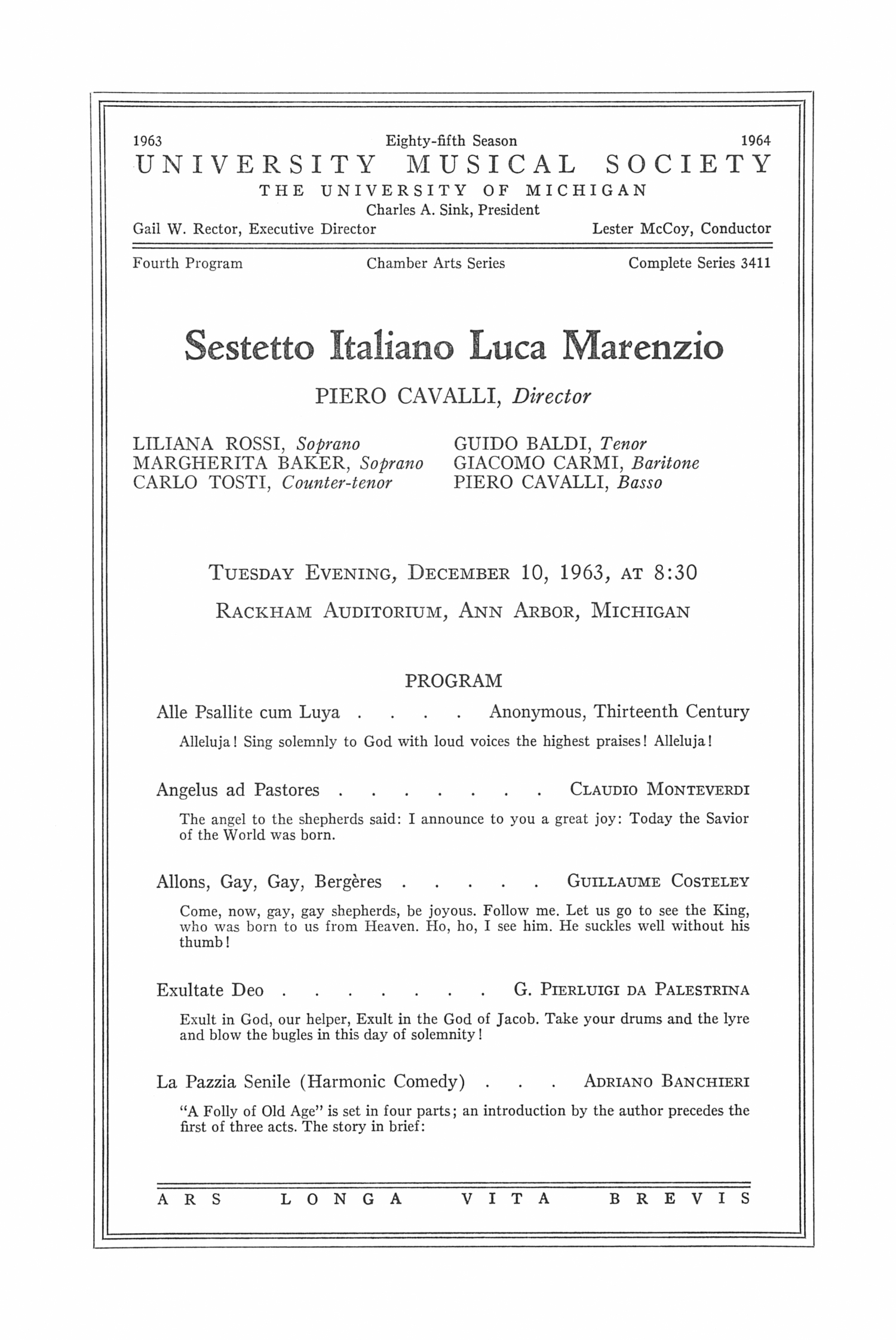 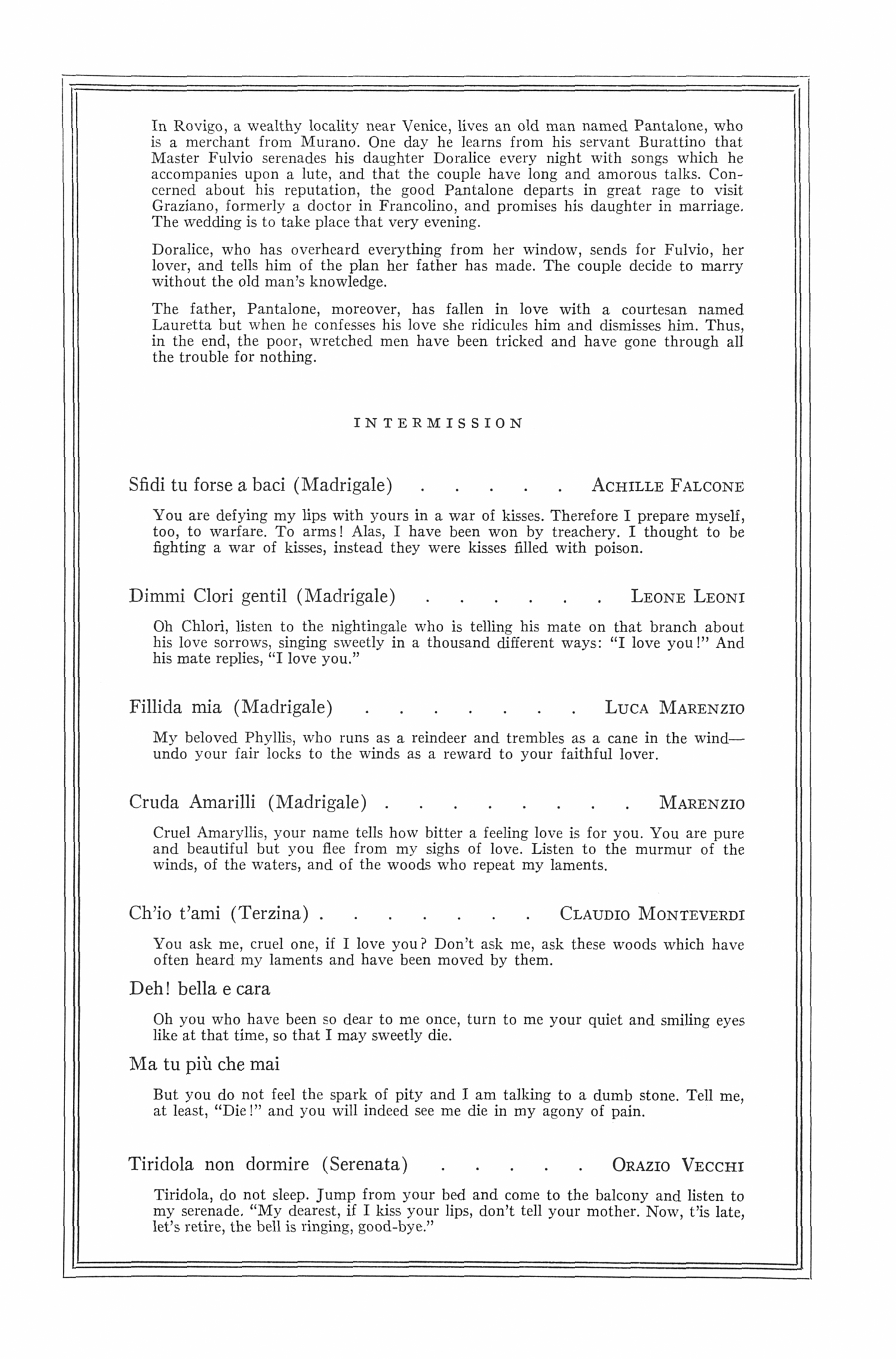 1963 Eighty-fifth Season 1964
UNIVERSITY MUSICAL SOCIETY
THE UNIVERSITY OF MICHIGAN
Charles A. Sink, President Gail W. Rector, Executive Director Lester McCoy, Conductor
Fourth Program Chamber Arts Series Complete Series 3411
Sestetto Italiano Luca Marenzio
PIERO CAVALLI, Director
LILIANA ROSSI, Soprano GUIDO BALDI, Tenor
MARGHERITA BAKER, Soprano GIACOMO CARMI, Baritone CARLO TOSTI, Counter-tenor PIERO CAVALLI, Basso
Tuesday Evening, December 10, 1963, at 8:30 Rackham Auditorium, Ann Arbor, Michigan
PROGRAM
Alle Psallite cum Luya .... Anonymous, Thirteenth Century Alleluja! Sing solemnly to God with loud voices the highest praises! Alleluja!
Angelus ad Pastores.......Claudio Monteverdi
The angel to the shepherds said: I announce to you a great joy: Today the Savior of the World was born.
Allons, Gay, Gay, Bergeres.....Guillaume Costeley
Come, now, gay, gay shepherds, be joyous. Follow me. Let us go to see the King, who was born to us from Heaven. Ho, ho, I see him. He suckles well without his thumb!
Exultate Deo.......G. PrERLUiGi da Palestrina
Exult in God, our helper, Exult in the God of Jacob. Take your drums and the lyre and blow the bugles in this day of solemnity !
La Pazzia Senile (Harmonic Comedy) . . . Adriano Banchieri
"A Folly of Old Age" is set in four parts; an introduction by the author precedes the first of three acts. The story in brief:
ARS LONGA VITA BREVIS
In Rovigo, a wealthy locality near Venice, lives an old man named Pantalone, who is a merchant from Murano. One day he learns from his servant Burattino that Master Fulvio serenades his daughter Doralice every night with songs which he accompanies upon a lute, and that the couple have long and amorous talks. Con?cerned about his reputation, the good Pantalone departs in great rage to visit Graziano, formerly a doctor in Francolino, and promises his daughter in marriage. The wedding is to take place that very evening.
Doralice, who has overheard everything from her window, sends for Fulvio, her lover, and tells him of the plan her father has made. The couple decide to marry without the old man's knowledge.
The father, Pantalone, moreover, has fallen in love with a courtesan named Lauretta but when he confesses his love she ridicules him and dismisses him. Thus, in the end, the poor, wretched men have been tricked and have gone through all the trouble for nothing.
INTERMISSION
Sfidi tu forse a baci (Madrigale).....Achille Falcone
You are defying my lips with yours in a war of kisses. Therefore I prepare myself, too, to warfare. To arms! Alas, I have been won by treachery. I thought to be fighting a war of kisses, instead they were kisses filled with poison.
Dimmi Clori gentil (Madrigale)......Leone Leoni
Oh Chlori, listen to the nightingale who is telling his mate on that branch about his love sorrows, singing sweetly in a thousand different ways: "I love you!" And his mate replies, "I love you."
Fillida mia (Madrigale).......Luca Marenzio
My beloved Phyllis, who runs as a reindeer and trembles as a cane in the wind-undo your fair locks to the winds as a reward to your faithful lover.
Cruda Amarilli (Madrigale)........Marenzio
Cruel Amaryllis, your name tells how bitter a feeling love is for you. You are pure and beautiful but you flee from my sighs of love. Listen to the murmur of the winds, of the waters, and of the woods who repeat my laments.
Ch'io t'ami (Terzina).......Claudio Monteverdi
You ask me, cruel one, if I love you Don't ask me, ask these woods which have often heard my laments and have been moved by them.
Deh! bella e cara
Oh you who have been so dear to me once, turn to me your quiet and smiling eyes like at that time, so that I may sweetly die.
Ma tu piii che mai
But you do not feel the spark of pity and I am talking to a dumb stone. Tell me, at least, "Die!" and you will indeed see me die in my agony of pain.
Tiridola non dormire (Serenata).....Orazio Vecchi
Tiridola, do not sleep. Jump from your bed and come to the balcony and listen to my serenade. "My dearest, if I kiss your lips, don't tell your mother. Now, t'is late, let's retire, the bell is ringing, good-bye."