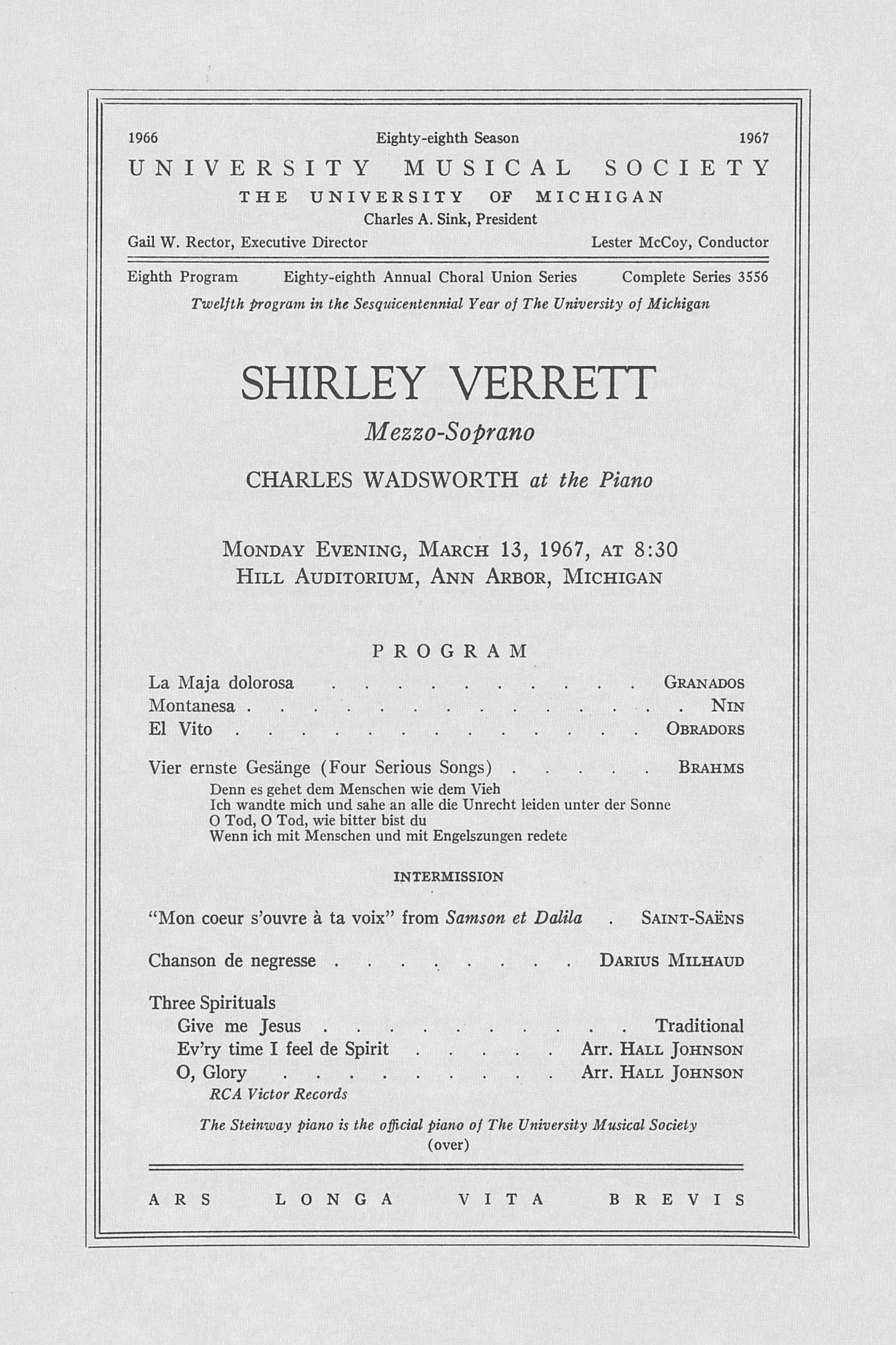 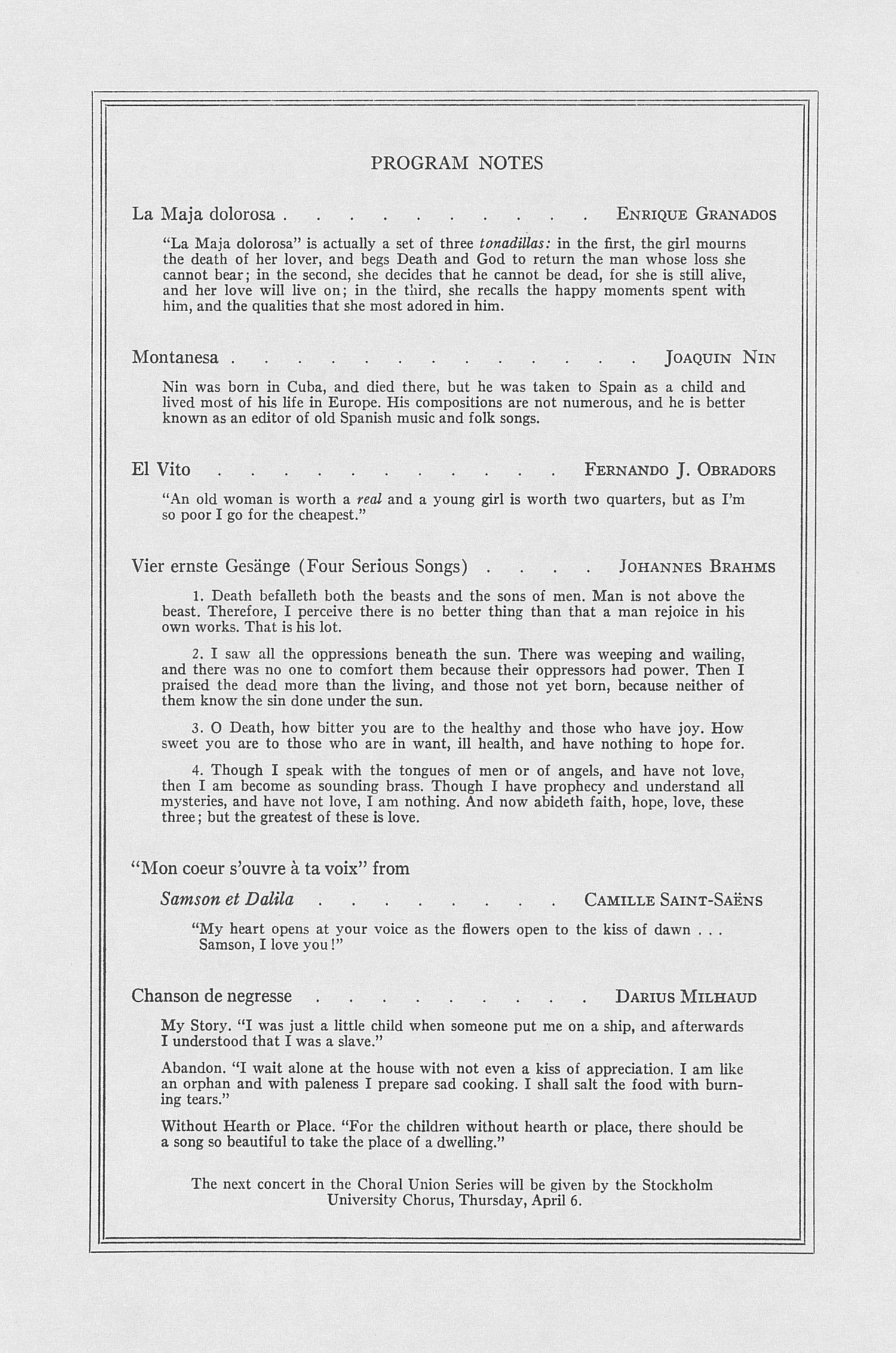 1966 Eighty-eighth Season 1967
UNIVERSITY MUSICAL SOCIETY
THE UNIVERSITY OF MICHIGAN
Charles A. Sink, President Gail W. Rector, Executive Director Lester McCoy, Conductor
Eighth Program Eighty-eighth Annual Choral Union Series Complete Series 3SS6
Twelfth program in the Sesquicentennial Year oj The University of Michigan
SHIRLEY VERRETT
Mezzo-Soprano CHARLES WADSWORTH at the Piano
Monday Evening, March 13, 1967, at 8:30 Hill Auditorium, Ann Arbor, Michigan
PROGRAM
La Maja dolorosa..........Granados
Montanesa............. Nin
El Vito.............Obradors
Vier ernste Gesange (Four Serious Songs).....Brahms
Denn es gehet dem Menschen wie dem Vieh
Ich wandte mich und sahe an alle die Unrecht leiden unter der Sonne
O Tod, O Tod, wie bitter bist du
Wenn ich mit Menschen und mit Engelszungen redete
INTERMISSION
"Mon coeur s'ouvre a ta voix" from Samson el Dalila . Saint-Saens Chanson de negresse ........ Darius Milhaud
Three Spirituals
Give me Jesus..........Traditional
Ev'ry time I feel de Spirit.....Arr. Hall Johnson
O, Glory.........Arr. Hall Johnson
RCA Victor Records
The Steinway piano is the official piano of The University Musical Society
(over)
ARS LONGA VITA BREVIS
PROGRAM NOTES
La Maja dolorosa..........Enrique Granados
"La Maja dolorosa" is actually a set of three tonadillas: in the first, the girl mourns the death of her lover, and begs Death and God to return the man whose loss she cannot bear; in the second, she decides that he cannot be dead, for she is still alive, and her love will live on; in the third, she recalls the happy moments spent with him, and the qualities that she most adored in him.
Montanesa.............Joaquin Nin
Nin was born in Cuba, and died there, but he was taken to Spain as a child and lived most of his life in Europe. His compositions are not numerous, and he is better known as an editor of old Spanish music and folk songs.
El Vito...........Fernando J. Obradors
"An old woman is worth a real and a young girl is worth two quarters, but as I'm so poor I go for the cheapest."
Vier ernste Gesange (Four Serious Songs) .... Johannes Brahms
1. Death befalleth both the beasts and the sons of men. Man is not above the beast. Therefore, I perceive there is no better thing than that a man rejoice in his own works. That is his lot.
2. I saw all the oppressions beneath the sun. There was weeping and wailing, and there was no one to comfort them because their oppressors had power. Then I praised the dead more than the living, and those not yet born, because neither of them know the sin done under the sun.
3. O Death, how bitter you are to the healthy and those who have joy. How sweet you are to those who are in want, ill health, and have nothing to hope for.
4. Though I speak with the tongues of men or of angels, and have not love, then I am become as sounding brass. Though I have prophecy and understand all mysteries, and have not love, I am nothing. And now abideth faith, hope, love, these three; but the greatest of these is love.
"Mon coeur s'ouvre a ta voix" from
Samson et Dalila........Camille Saint-Saens
"My heart opens at your voice as the flowers open to the kiss of dawn . . . Samson, I love you!"
Chanson de negresse.........Darius Milhaud
My Story. "I was just a little child when someone put me on a ship, and afterwards I understood that I was a slave."
Abandon. "I wait alone at the house with not even a kiss of appreciation. I am like an orphan and with paleness I prepare sad cooking. I shall salt the food with burn?ing tears."
Without Hearth or Place. "For the children without hearth or place, there should be a song so beautiful to take the place of a dwelling."
The next concert in the Choral Union Series will be given by the Stockholm University Chorus, Thursday, April 6.