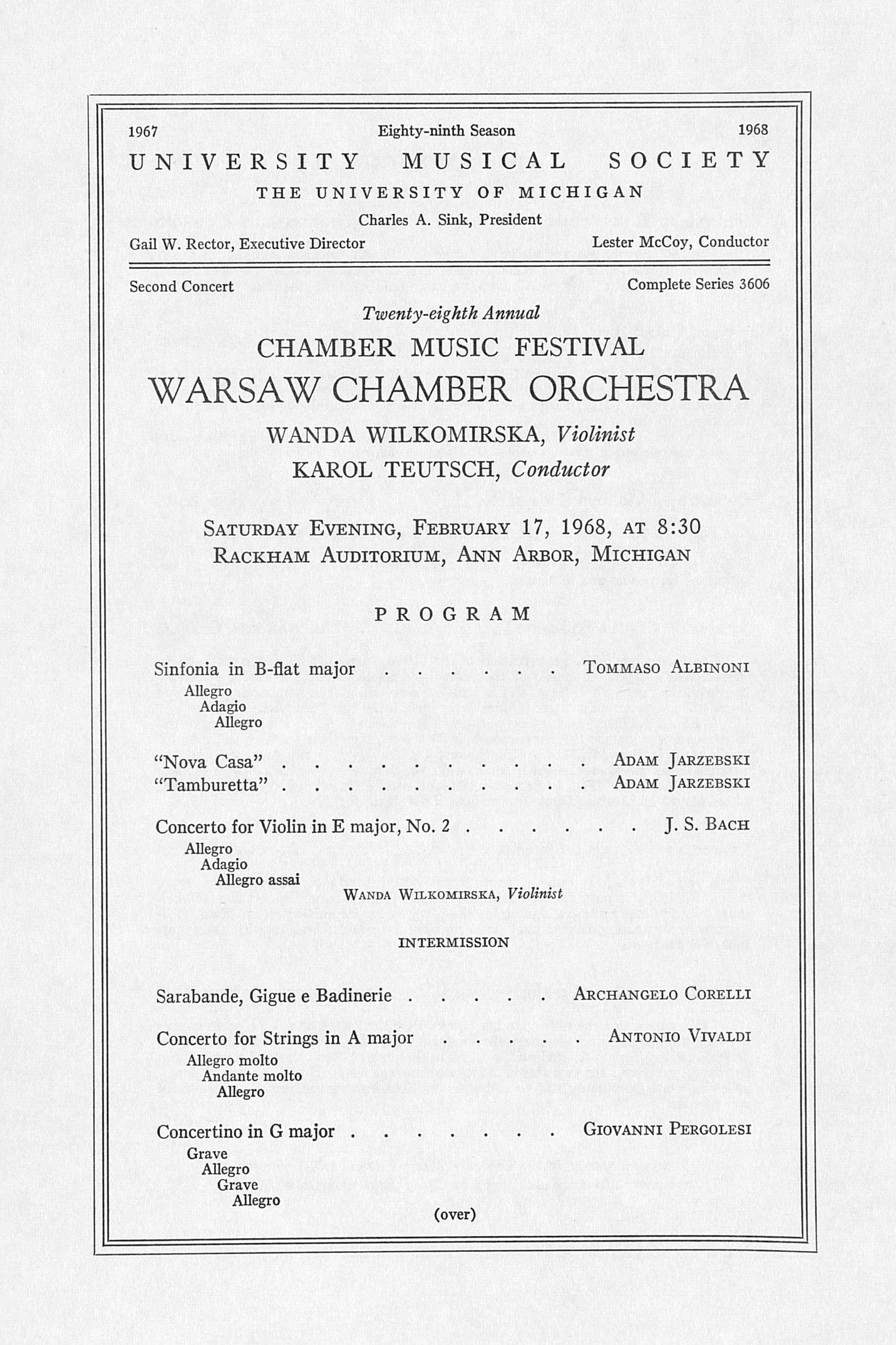 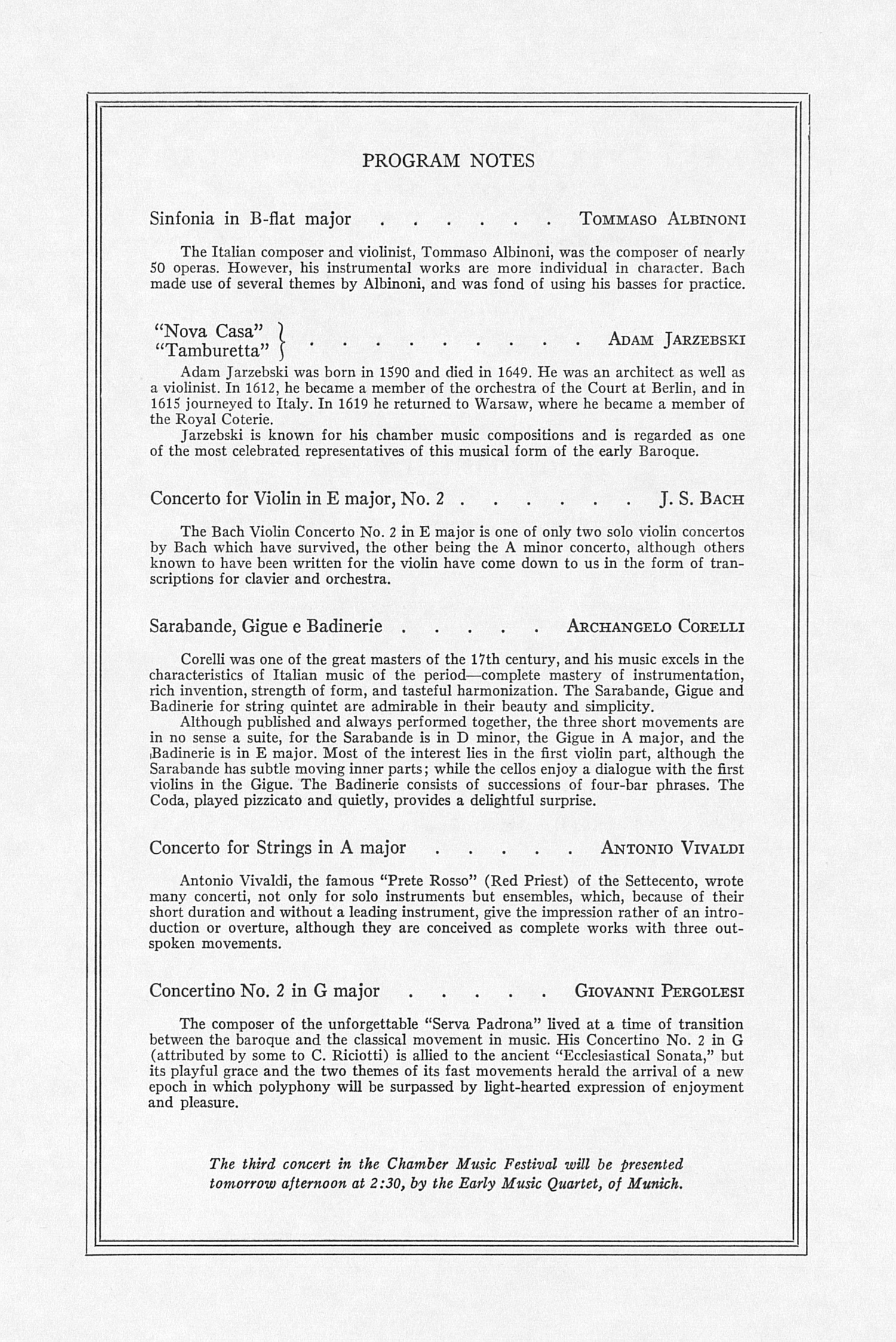 1967 Eighty-ninth Season 1968
UNIVERSITY MUSICAL SOCIETY
THE UNIVERSITY OF MICHIGAN
Charles A. Sink, President Gail W. Rector, Executive Director Lester McCoy, Conductor
Second Concert Complete Series 3606
Twenty-eighth Annual
CHAMBER MUSIC FESTIVAL
WARSAW CHAMBER ORCHESTRA
WANDA WILKOMIRSKA, Violinist KAROL TEUTSCH, Conductor
Saturday Evening, February 17, 1968, at 8:30 Rackham Auditorium, Ann Arbor, Michigan
PROGRAM
Sinfonia in B-flat major......Tommaso Albinoni
Allegro Adagio Allegro
"Nova Casa"..........Adam Jarzebski
"Tamburetta"..........Adam Jarzebski
Concerto for Violin in E major, No. 2......J. S. Bach
Allegro Adagio Allegro assai
Wanda Wilkomirska, Violinist
INTERMISSION
Sarabande, Gigue e Badinerie.....Archangelo Corelli
Concerto for Strings in A major.....Antonio Vivaldi
Allegro molto Andante molto Allegro
Concertino in G major.......Giovanni Pergolesi
Grave
Allegro Grave Allegro
(over)
PROGRAM NOTES
Sinfonia in B-flat major......Tommaso Albinoni
The Italian composer and violinist, Tommaso Albinoni, was the composer of nearly SO operas. However, his instrumental works are more individual in character. Bach made use of several themes by Albinoni, and was fond of using his basses for practice.
"Nova Casa';
.. ? v.........Adam Jarzebski
"Tamburetta"
Adam Jarzebski was born in 1590 and died in 1649. He was an architect as well as a violinist. In 1612, he became a member of the orchestra of the Court at Berlin, and in 1615 journeyed to Italy. In 1619 he returned to Warsaw, where he became a member of the Royal Coterie.
Jarzebski is known for his chamber music compositions and is regarded as one of the most celebrated representatives of this musical form of the early Baroque.
Concerto for Violin in E major, No. 2......J. S. Bach
The Bach Violin Concerto No. 2 in E major is one of only two solo violin concertos by Bach which have survived, the other being the A minor concerto, although others known to have been written for the violin have come down to us in the form of tran?scriptions for clavier and orchestra.
Sarabande, Gigue e Badinerie.....Archangelo Corelli
Corelli was one of the great masters of the 17th century, and his music excels in the characteristics of Italian music of the period--complete mastery of instrumentation, rich invention, strength of form, and tasteful harmonization. The Sarabande, Gigue and Badinerie for string quintet are admirable in their beauty and simplicity.
Although published and always performed together, the three short movements are in no sense a suite, for the Sarabande is in D minor, the Gigue in A major, and the Badinerie is in E major. Most of the interest lies in the first violin part, although the Sarabande has subtle moving inner parts; while the cellos enjoy a dialogue with the first violins in the Gigue. The Badinerie consists of successions of four-bar phrases. The Coda, played pizzicato and quietly, provides a delightful surprise.
Concerto for Strings in A major.....Antonio Vivaldi
Antonio Vivaldi, the famous "Prete Rosso" (Red Priest) of the Settecento, wrote many concerti, not only for solo instruments but ensembles, which, because of their short duration and without a leading instrument, give the impression rather of an intro?duction or overture, although they are conceived as complete works with three out?spoken movements.
Concertino No. 2 in G major.....Giovanni Pergolesi
The composer of the unforgettable "Serva Padrona" lived at a time of transition between the baroque and the classical movement in music. His Concertino No. 2 in G (attributed by some to C. Riciotti) is allied to the ancient "Ecclesiastical Sonata," but its playful grace and the two themes of its fast movements herald the arrival of a new epoch in which polyphony will be surpassed by light-hearted expression of enjoyment and pleasure.
The third concert in the Chamber Music Festival will be presented tomorrow afternoon at 2:30, by the Early Music Quartet, of Munich.