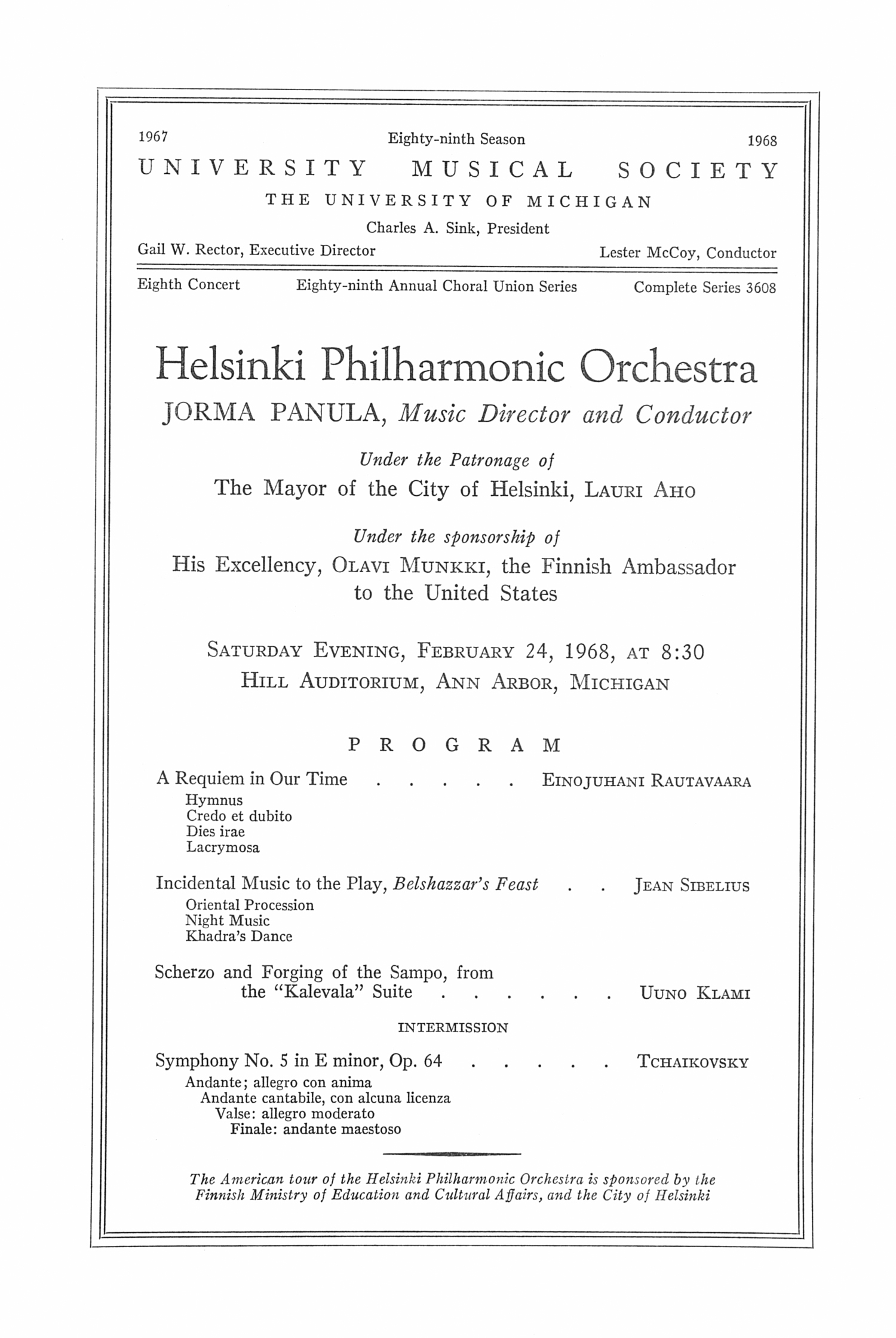 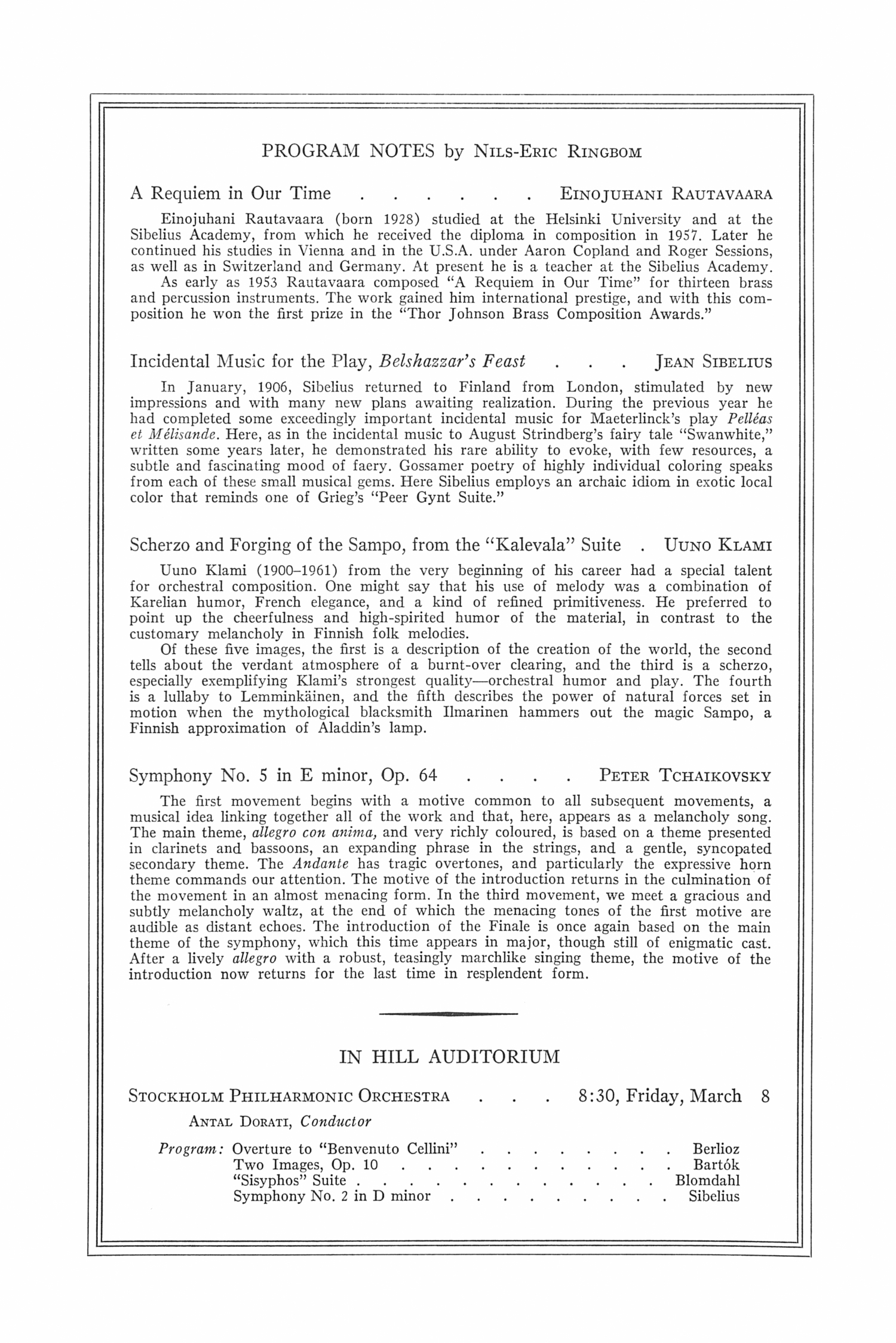 1967 Eighty-ninth Season 1968
UNIVERSITY MUSICAL SOCIETY
THE UNIVERSITY OF MICHIGAN
Charles A. Sink, President Gail W. Rector, Executive Director Lester McCoy, Conductor
Eighth Concert Eighty-ninth Annual Choral Union Series Complete Series 3608
Helsinki Philharmonic Orchestra
JORMA PANULA, Music Director and Conductor
Under the Patronage of The Mayor of the City of Helsinki, Lauri Aho
Under the sponsorship of
His Excellency, Olavi Munkki, the Finnish Ambassador to the United States
Saturday Evening, February 24, 1968, at 8:30 Hill Auditorium, Ann Arbor, Michigan
PROGRAM
A Requiem in Our Time.....Einojuhani Rautavaara
Hymnus Credo et dubito Dies irae Lacrymosa
Incidental Music to the Play, Belshazzar's Feast . . Jean Sibelius Oriental Procession Night Music Khadra's Dance
Scherzo and Forging of the Sampo, from
the "Kalevala" Suite......Uuno Klami
INTERMISSION
Symphony No. S in E minor, Op. 64.....Tchaikovsky
Andante; allegro con anima Andante cantabile, con alcuna liccnza Valse: allegro moderato Finale: andante maestoso
The American tour of the Helsinki Philharmonic Orchestra is sponsored by the Finnisli Ministry of Education and Cultural Affairs, and the City of Helsinki
PROGRAM NOTES by Nils-Eric Ringbom
A Requiem in Our Time......Einojuhani Rautavaara
Einojuhani Rautavaara (born 1928) studied at the Helsinki University and at the Sibelius Academy, from which he received the diploma in composition in 1957. Later he continued his studies in Vienna and in the U.S.A. under Aaron Copland and Roger Sessions, as well as in Switzerland and Germany. At present he is a teacher at the Sibelius Academy.
As early as 1953 Rautavaara composed "A Requiem in Our Time" for thirteen brass and percussion instruments. The work gained him international prestige, and with this com?position he won the first prize in the "Thor Johnson Brass Composition Awards."
Incidental Music for the Play, Bchhazzar's Feast . . . Jean Sibelius
In January, 1906, Sibelius returned to Finland from London, stimulated by new impressions and with many new plans awaiting realization. During the previous year he had completed some exceedingly important incidental music for Maeterlinck's play Pelleas ct Melhandc. Here, as in the incidental music to August Strindberg's fairy tale "Swanwhite," written some years later, he demonstrated his rare ability to evoke, with few resources, a subtle and fascinating mood of faery. Gossamer poetry of highly individual coloring speaks from each of these small musical gems. Here Sibelius employs an archaic idiom in exotic local color that reminds one of Grieg's "Peer Gynt Suite."
Scherzo and Forging of the Sampo, from the "Kalevala" Suite . Uuno Klami
Uuno Klami (1900-1961) from the very beginning of his career had a special talent for orchestral composition. One might say that his use of melody was a combination of Karelian humor, French elegance, and a kind of refined primitiveness. He preferred to point up the cheerfulness and high-spirited humor of the material, in contrast to the customary melancholy in Finnish folk melodies.
Of these five images, the first is a description of the creation of the world, the second tells about the verdant atmosphere of a burnt-over clearing, and the third is a scherzo, especially exemplifying Klami's strongest quality---orchestral humor and play. The fourth is a lullaby to Lemminkainen, and the fifth describes the power of natural forces set in motion when the mythological blacksmith Ilmarinen hammers out the magic Sampo, a Finnish approximation of Aladdin's lamp.
Symphony No. 5 in E minor, Op. 64 .... Peter Tchaikovsky
The first movement begins with a motive common to all subsequent movements, a musical idea linking together all of the work and that, here, appears as a melancholy song. The main theme, allegro con anima, and very richly coloured, is based on a theme presented in clarinets and bassoons, an expanding phrase in the strings, and a gentle, syncopated secondary theme. The Andante has tragic overtones, and particularly the expressive horn theme commands our attention. The motive of the introduction returns in the culmination of the movement in an almost menacing form. In the third movement, we meet a gracious and subtly melancholy waltz, at the end of which the menacing tones of the first motive are audible as distant echoes. The introduction of the Finale is once again based on the main theme of the symphony, which this time appears in major, though still of enigmatic cast. After a lively allegro with a robust, teasingly marchlike singing theme, the motive of the introduction now returns for the last time in resplendent form.
IN HILL AUDITORIUM
Stockholm Philharmonic Orchestra . . . 8:30, Friday, March Antal Dorati, Conductor
Program: Overture to "Benvcnuto Cellini"........Berlioz
Two Images, Op. 10...........Bartok
"Sisyphos" Suite............Blomdahl
Symphony No. 2 in D minor.........Sibelius