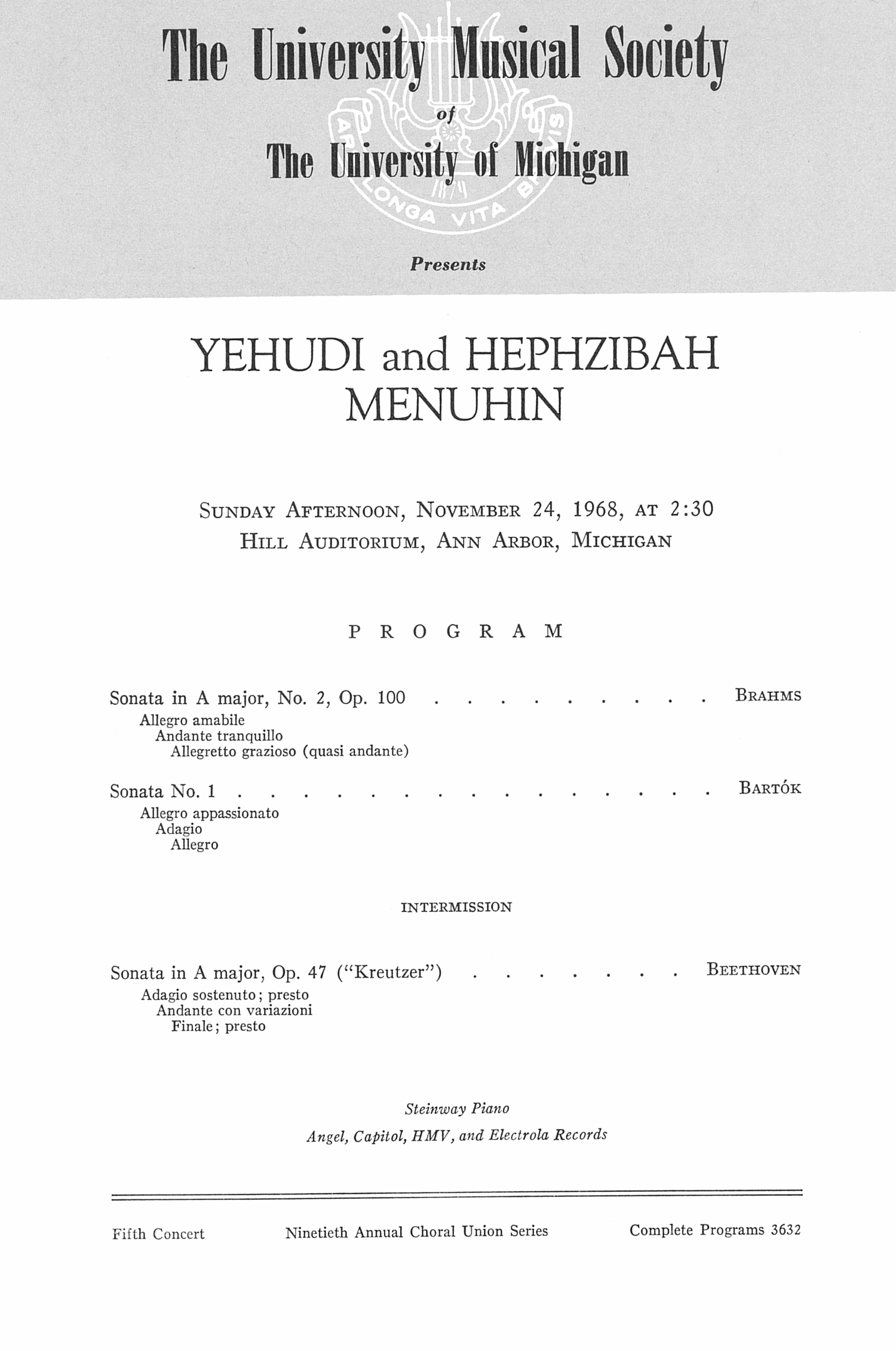 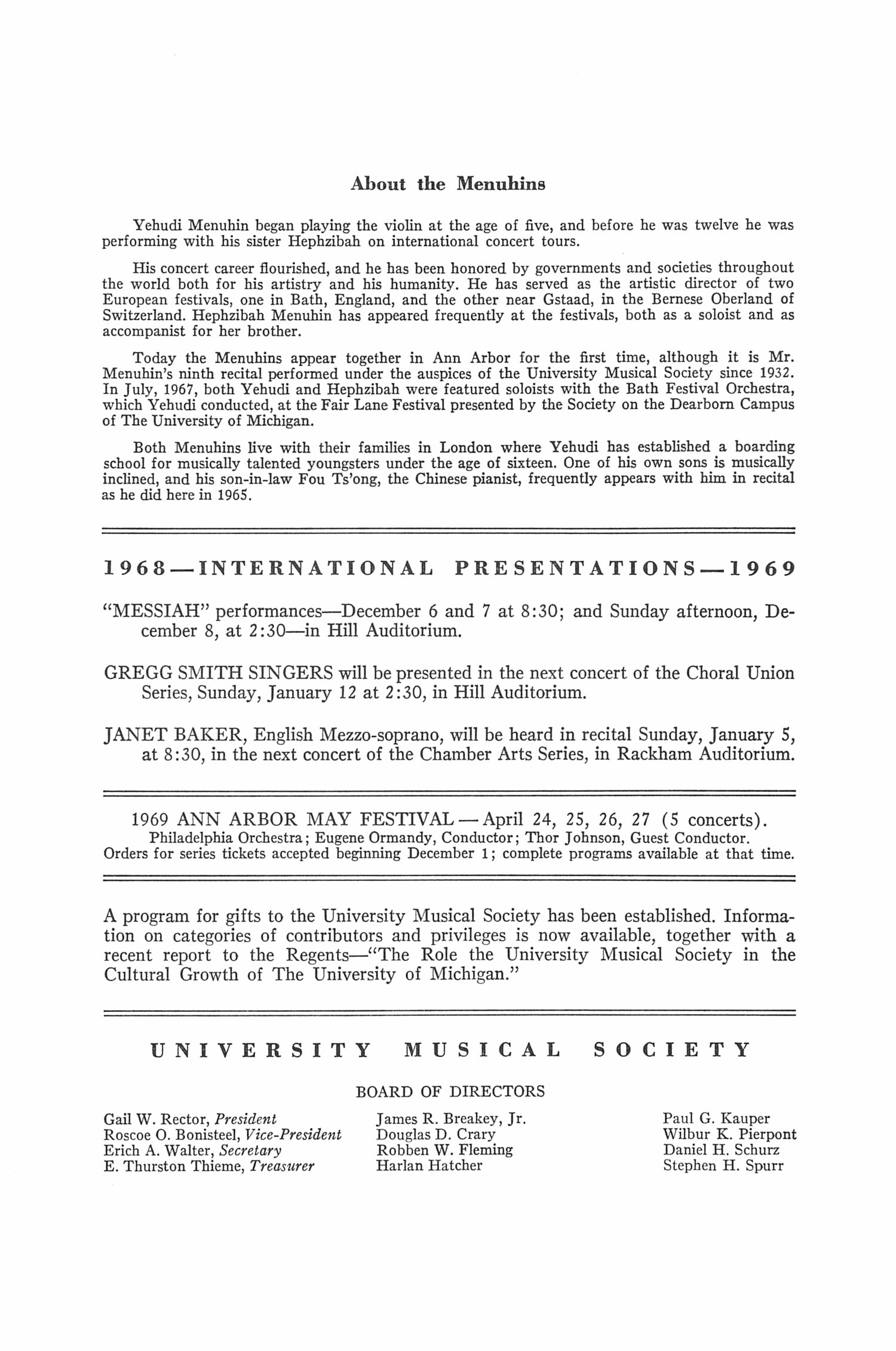 The University Musical Society
of
The University of Michigan
Presents
YEHUDI and HEPHZIBAH MENUHIN
Sunday Afternoon, November 24, 1968, at 2:30 Hill Auditorium, Ann Arbor, Michigan
PROGRAM
Sonata in A major, No. 2, Op. 100.........Brahms
Allegro amabile Andante tranquillo
Allegretto grazioso (quasi andante)
Sonata No. 1...............Bartok
Allegro appassionato Adagio Allegro
INTERMISSION
Sonata in A major, Op. 47 ("Kreutzer").......Beethoven
Adagio sostenuto; presto Andante con variazioni Finale; presto
Steinway Piano Angel, Capitol, HMV, and Electrola Records
Fifth Concert Ninetieth Annual Choral Union Series Complete Programs 3632
About the Menuhins
Yehudi Menuhin began playing the violin at the age of five, and before he was twelve he was performing with his sister Hephzibah on international concert tours.
His concert career flourished, and he has been honored by governments and societies throughout the world both for his artistry and his humanity. He has served as the artistic director of two European festivals, one in Bath, England, and the other near Gstaad, in the Bernese Oberland of Switzerland. Hephzibah Menuhin has appeared frequently at the festivals, both as a soloist and as accompanist for her brother.
Today the Menuhins appear together in Ann Arbor for the first time, although it is Mr. Menuhin's ninth recital performed under the auspices of the University Musical Society since 1932. In July, 1967, both Yehudi and Hephzibah were featured soloists with the Bath Festival Orchestra, which Yehudi conducted, at the Fair Lane Festival presented by the Society on the Dearborn Campus of The University of Michigan.
Both Menuhins live with their families in London where Yehudi has established a boarding school for musically talented youngsters under the age of sixteen. One of his own sons is musically inclined, and his soninlaw Fou Ts'ong, the Chinese pianist, frequently appears with him in recital as he did here in 196S.
1968 -INTERNATIONAL PRESENTATIONS -1969
"MESSIAH" performances--December 6 and 7 at 8:30; and Sunday afternoon, De?cember 8, at 2:30--in Hill Auditorium.
GREGG SMITH SINGERS will be presented in the next concert of the Choral Union Series, Sunday, January 12 at 2:30, in Hill Auditorium.
JANET BAKER, English Mezzosoprano, will be heard in recital Sunday, January 5, at 8:30, in the next concert of the Chamber Arts Series, in Rackham Auditorium.
1969 ANN ARBOR MAY FESTIVAL -April 24, 25, 26, 27 (5 concerts).
Philadelphia Orchestra; Eugene Ormandy, Conductor; Thor Johnson, Guest Conductor. Orders for series tickets accepted beginning December 1; complete programs available at that time.
A program for gifts to the University Musical Society has been established. Informa?tion on categories of contributors and privileges is now available, together with a recent report to the Regents--"The Role the University Musical Society in the Cultural Growth of The University of Michigan."
UNIVERSITY MUSICAL SOCIETY
Gail W. Rector, President
Roscoe O. Bonisteel, VicePresident
Erich A. Walter, Secretary
E. Thurston Thieme, Treasurer
BOARD OF DIRECTORS
James R. Breakey, Jr. Douglas D. Crary Robben W. Fleming Harlan Hatcher
Paul G. Kauper Wilbur K. Pierpont Daniel H. Schurz Stephen H. Spurr