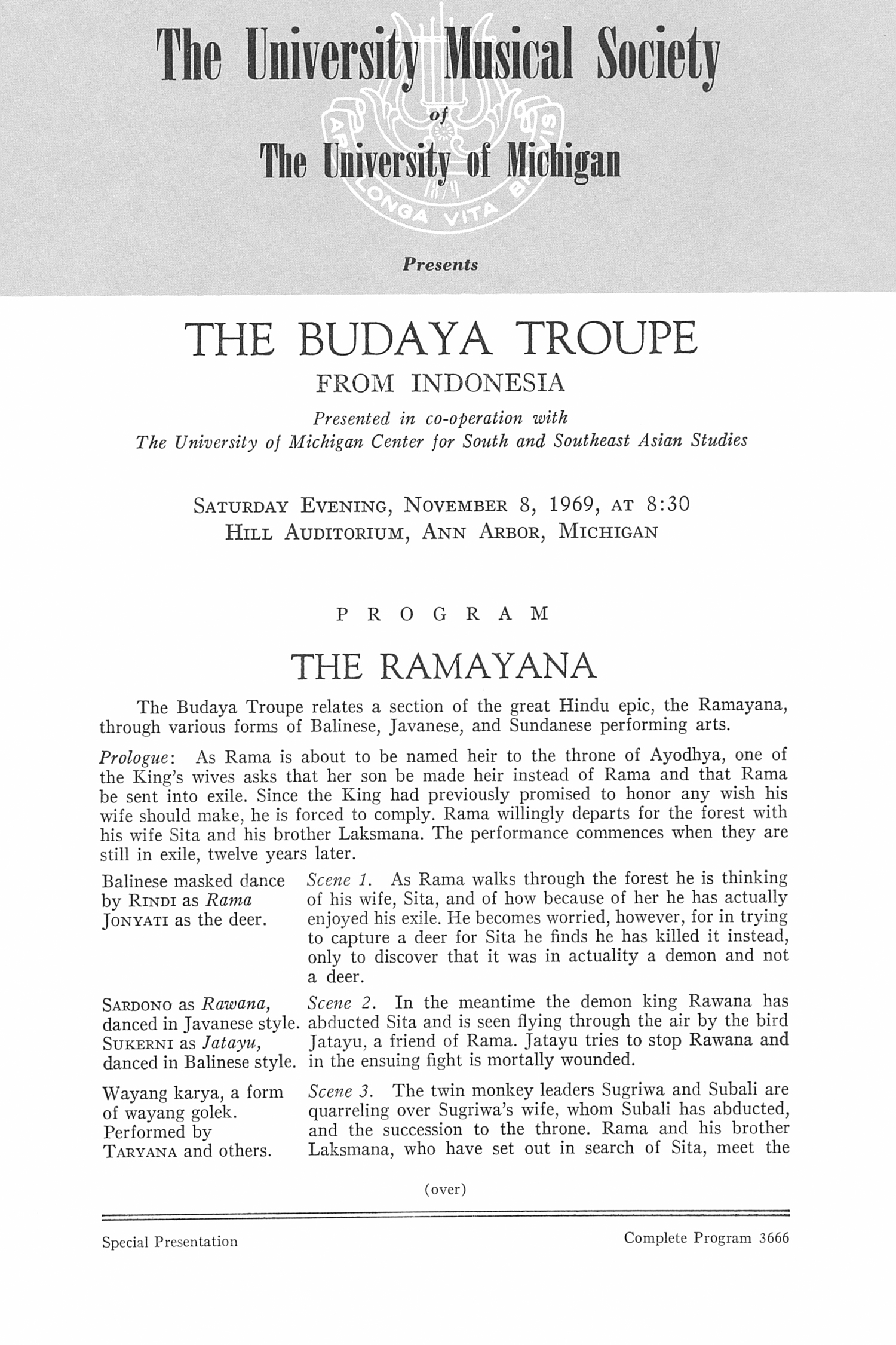 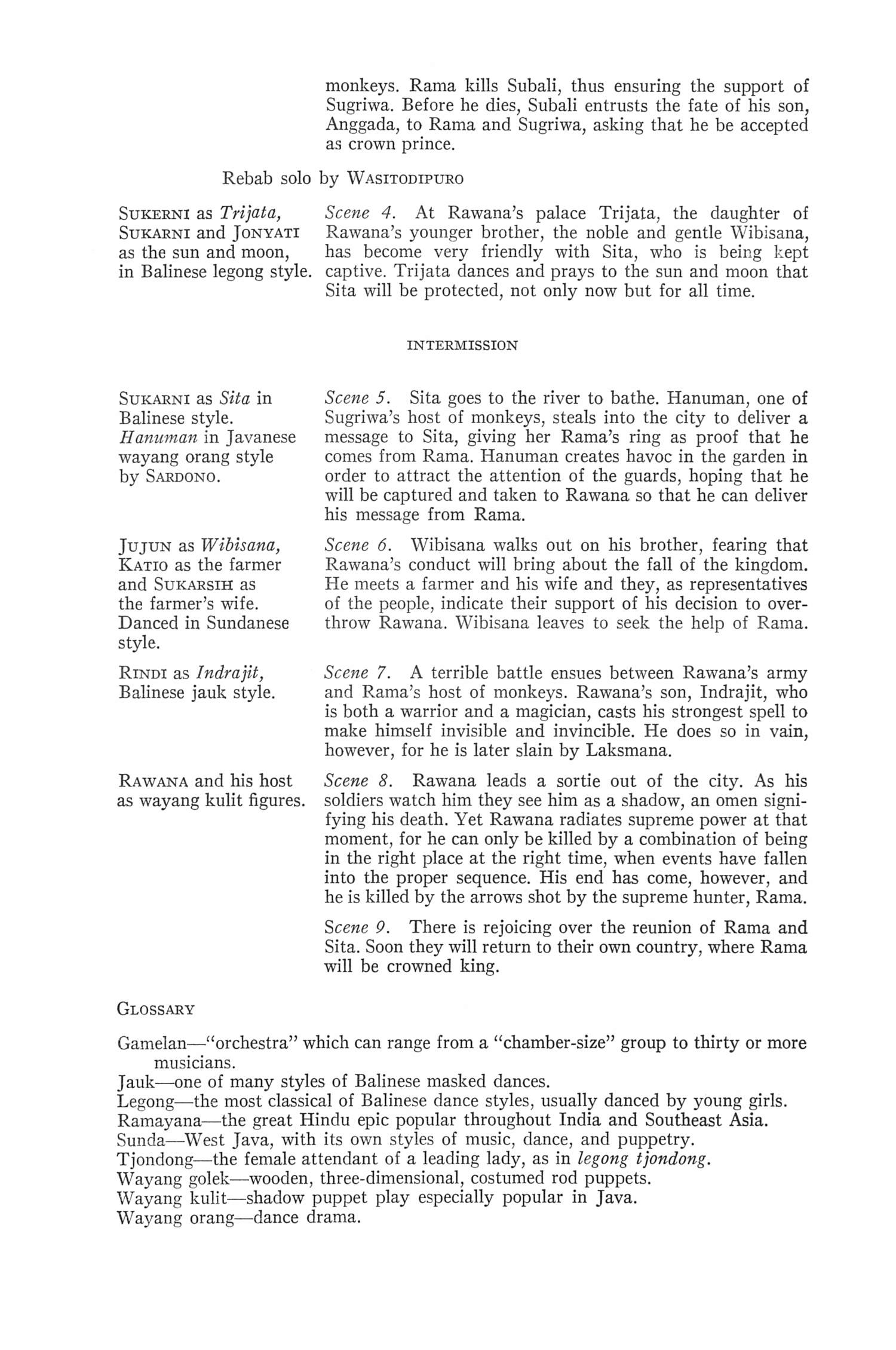 The University Musical Society
of
The University of Michigan
Presents
THE BUDAYA TROUPE
FROM INDONESIA
Presented in cooperation with The University of Michigan Center for South and Southeast Asian Studies
Saturday Evening, November 8, 1969, at 8:30 Hill Auditorium, Ann Arbor, Michigan
PROGRAM
THE RAMAYANA
The Budaya Troupe relates a section of the great Hindu epic, the Ramayana, through various forms of Balinese, Javanese, and Sundanese performing arts.
Prologue: As Rama is about to be named heir to the throne of Ayodhya, one of the King's wives asks that her son be made heir instead of Rama and that Rama be sent into exile. Since the King had previously promised to honor any wish his wife should make, he is forced to comply. Rama willingly departs for the forest with his wife Sita and his brother Laksmana. The performance commences when they are still in exile, twelve years later.
Balinese masked dance Scene 1. As Rama walks through the forest he is thinking
by Rindi as Rama of his wife, Sita, and of how because of her he has actually
Jonyati as the deer. enjoyed his exile. He becomes worried, however, for in trying
to capture a deer for Sita he finds he has killed it instead,
only to discover that it was in actuality a demon and not
a deer.
Sardono as Rawana, Scene 2. In the meantime the demon king Rawana has danced in Javanese style, abducted Sita and is seen flying through the air by the bird Sukerni as Jatayu, Jatayu. a friend of Rama. Jatayu tries to stop Rawana and
danced in Balinese style, in the ensuing fight is mortally wounded.
Wayang karya, a form Scene 3. The twin monkey leaders Sugriwa and Subali are
of wayang golek. quarreling over Sugriwa's wife, whom Subali has abducted,
Performed by and the succession to the throne. Rama and his brother
Taryana and others. Laksmana, who have set out in search of Sita, meet the
(over) Special Presentation Complete Program 3666
monkeys. Rama kills Subali, thus ensuring the support of Sugriwa. Before he dies, Subali entrusts the fate of his son, Anggada, to Rama and Sugriwa, asking that he be accepted as crown prince.
Rebab solo by Wasitodipuro
Sukerni as Trijata, Sukarni and Jonyati as the sun and moon,
Scene 4. At Rawana's palace Trijata, the daughter of Rawana's younger brother, the noble and gentle Wibisana, has become very friendly with Sita, who is being kept
in Balinese legong style, captive. Trijata dances and prays to the sun and moon that Sita will be protected, not only now but for all time.
INTERMISSION
Sukarni as Sita in Balinese style. Hanuman in Javanese wayang orang style by Sardono.
Jujun as Wibisana, Katio as the farmer and Sukarsih as the farmer's wife. Danced in Sundanese style.
Rindi as Indrajit, Balinese jauk style.
Rawana and his host as wayang kulit figures.
Scene 5. Sita goes to the river to bathe. Hanuman, one of Sugriwa's host of monkeys, steals into the city to deliver a message to Sita, giving her Rama's ring as proof that he comes from Rama. Hanuman creates havoc in the garden in order to attract the attention of the guards, hoping that he will be captured and taken to Rawana so that he can deliver his message from Rama.
Scene 6. Wibisana walks out on his brother, fearing that Rawana's conduct will bring about the fall of the kingdom. He meets a farmer and his wife and they, as representatives of the people, indicate their support of his decision to over?throw Rawana. Wibisana leaves to seek the help of Rama.
Scene 7. A terrible battle ensues between Rawana's army and Rama's host of monkeys. Rawana's son, Indrajit, who is both a warrior and a magician, casts his strongest spell to make himself invisible and invincible. He does so in vain, however, for he is later slain by Laksmana.
Scene 8. Rawana leads a sortie out of the city. As his soldiers watch him they see him as a shadow, an omen signi?fying his death. Yet Rawana radiates supreme power at that moment, for he can only be killed by a combination of being in the right place at the right time, when events have fallen into the proper sequence. His end has come, however, and he is killed by the arrows shot by the supreme hunter, Rama.
Scene 9. There is rejoicing over the reunion of Rama and Sita. Soon they will return to their own country, where Rama will be crowned king.
Glossary
Gamelan--"orchestra" which can range from a "chambersize" group to thirty or more
musicians.
Jauk--one of many styles of Balinese masked dances.
Legong--the most classical of Balinese dance styles, usually danced by young girls. Ramayana--the great Hindu epic popular throughout India and Southeast Asia. Sunda--West Java, with its own styles of music, dance, and puppetry. Tjondong--the female attendant of a leading lady, as in legong tjondong. Wayang golek--wooden, threedimensional, costumed rod puppets. Wayang kulit--shadow puppet play especially popular in Java. Wayang orang--dance drama.