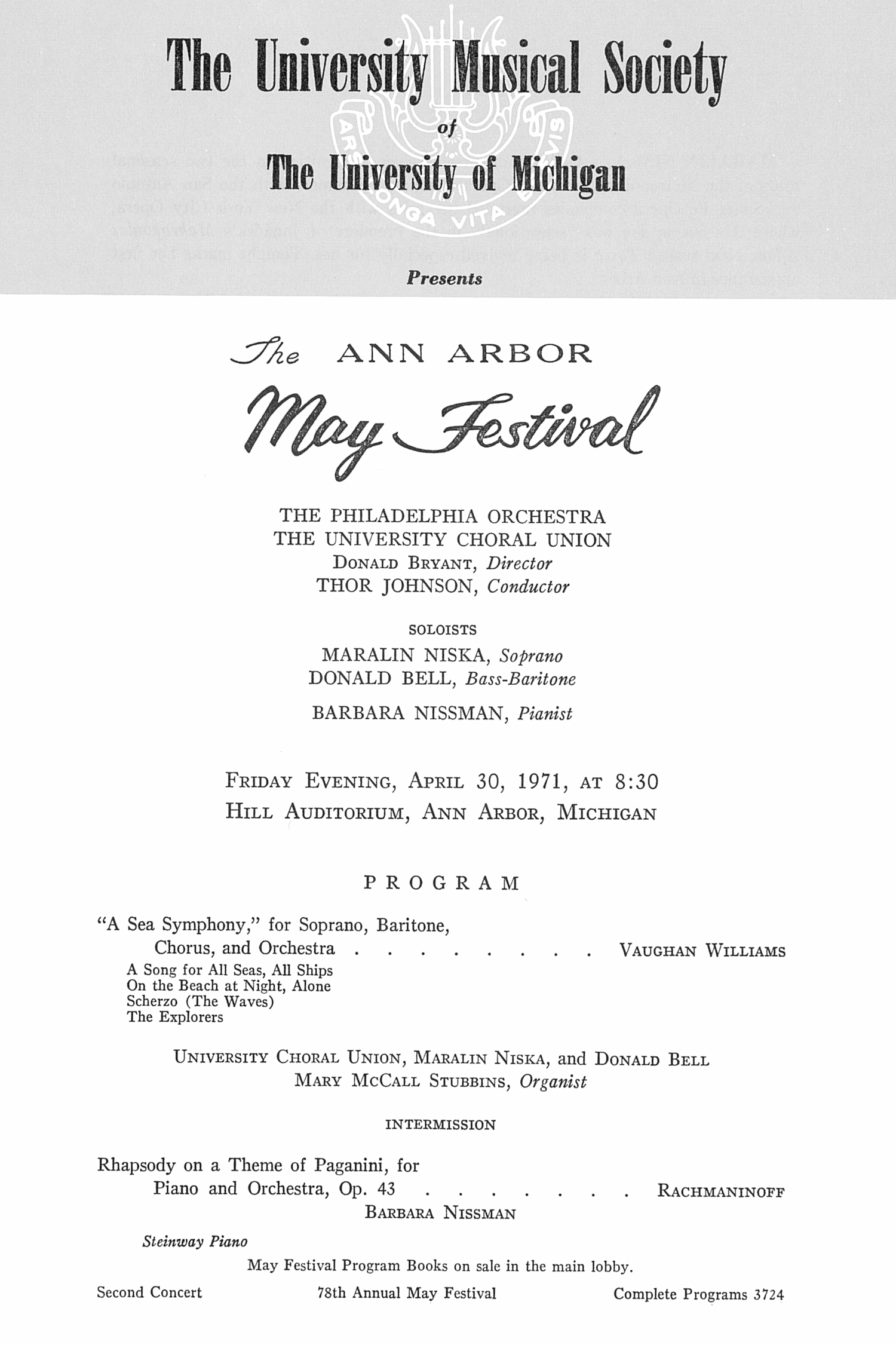 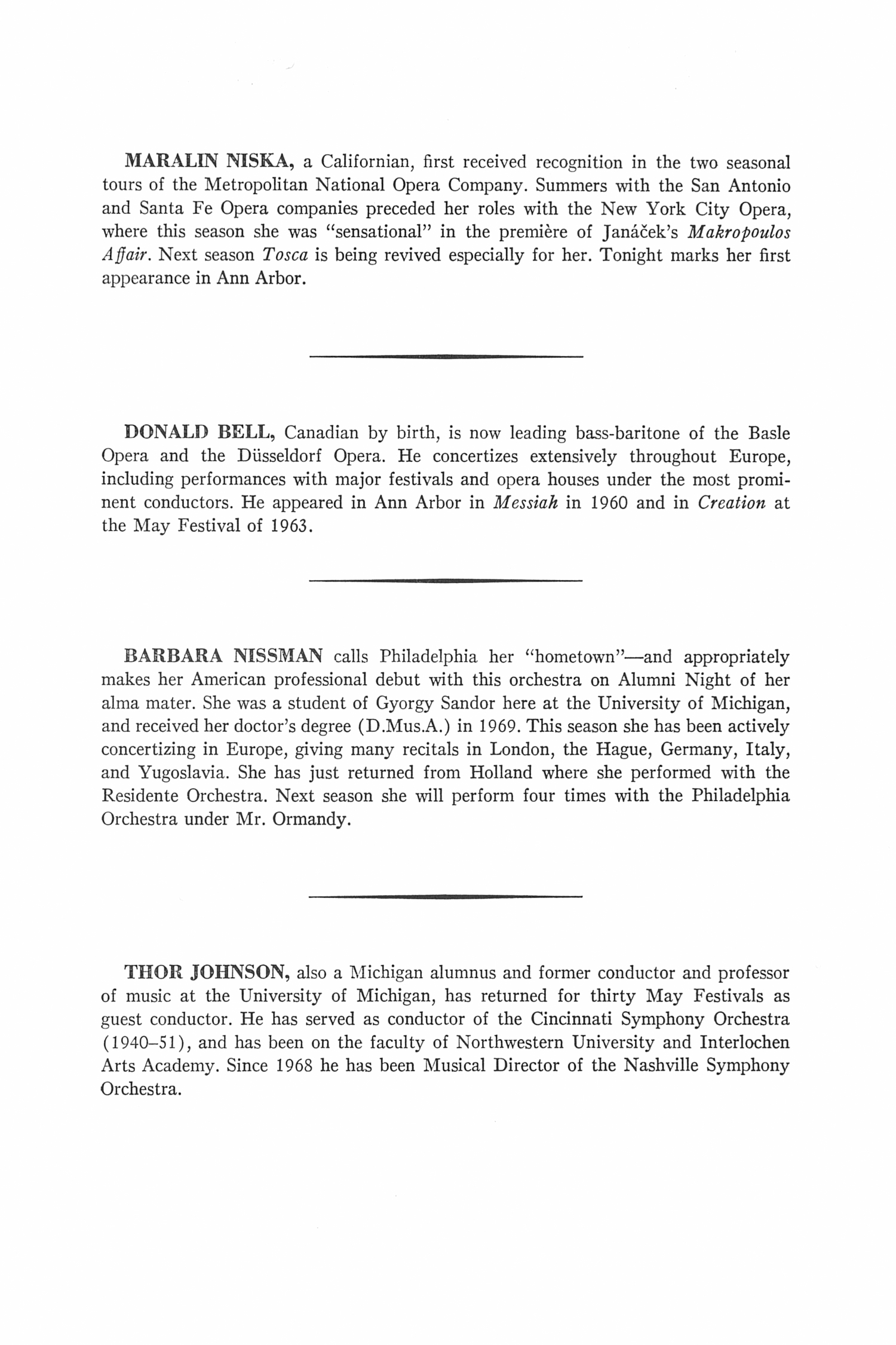 The University Musical Society
of
The University of Michigan
Presents
ANN ARBOR
THE PHILADELPHIA ORCHESTRA THE UNIVERSITY CHORAL UNION
Donald Bryant, Director THOR JOHNSON, Conductor
SOLOISTS
MARALIN NISKA, Soprano DONALD BELL, BassBaritone
BARBARA NISSMAN, Pianist
Friday Evening, April 30, 1971, at 8:30 Hill Auditorium, Ann Arbor, Michigan
PROGRAM
"A Sea Symphony," for Soprano, Baritone,
Chorus, and Orchestra........Vaughan Williams
A Song for All Seas, All Ships On the Beach at Night, Alone Scherzo (The Waves) The Explorers
University Choral Union, Maralin Niska, and Donald Bell Mary McCall Stubbins, Organist
INTERMISSION
Rhapsody on a Theme of Paganini, for
Piano and Orchestra, Op. 43.......Rachmaninoff
Barbara Nissman
Steinway Piano
May Festival Program Books on sale in the main lobby. Second Concert 78th Annual May Festival Complete Programs 3724
MARALIN NISKA, a Californian, first received recognition in the two seasonal tours of the Metropolitan National Opera Company. Summers with the San Antonio and Santa Fe Opera companies preceded her roles with the New York City Opera, where this season she was "sensational" in the premiere of Janacek's Makropoulos Affair. Next season Tosca is being revived especially for her. Tonight marks her first appearance in Ann Arbor.
DONALD BELL, Canadian by birth, is now leading bassbaritone of the Basle Opera and the Dusseldorf Opera. He concertizes extensively throughout Europe, including performances with major festivals and opera houses under the most promi?nent conductors. He appeared in Ann Arbor in Messiah in 1960 and in Creation at the May Festival of 1963.
BARBARA NISSMAN calls Philadelphia her "hometown"--and appropriately makes her American professional debut with this orchestra on Alumni Night of her alma mater. She was a student of Gyorgy Sandor here at the University of Michigan, and received her doctor's degree (D.Mus.A.) in 1969. This season she has been actively concertizing in Europe, giving many recitals in London, the Hague, Germany, Italy, and Yugoslavia. She has just returned from Holland where she performed with the Residente Orchestra. Next season she will perform four times with the Philadelphia Orchestra under Mr. Ormandy.
THOR JOHNSON, also a Michigan alumnus and former conductor and professor of music at the University of Michigan, has returned for thirty May Festivals as guest conductor. He has served as conductor of the Cincinnati Symphony Orchestra (194051), and has been on the faculty of Northwestern University and Interlochen Arts Academy. Since 1968 he has been Musical Director of the Nashville Symphony Orchestra.