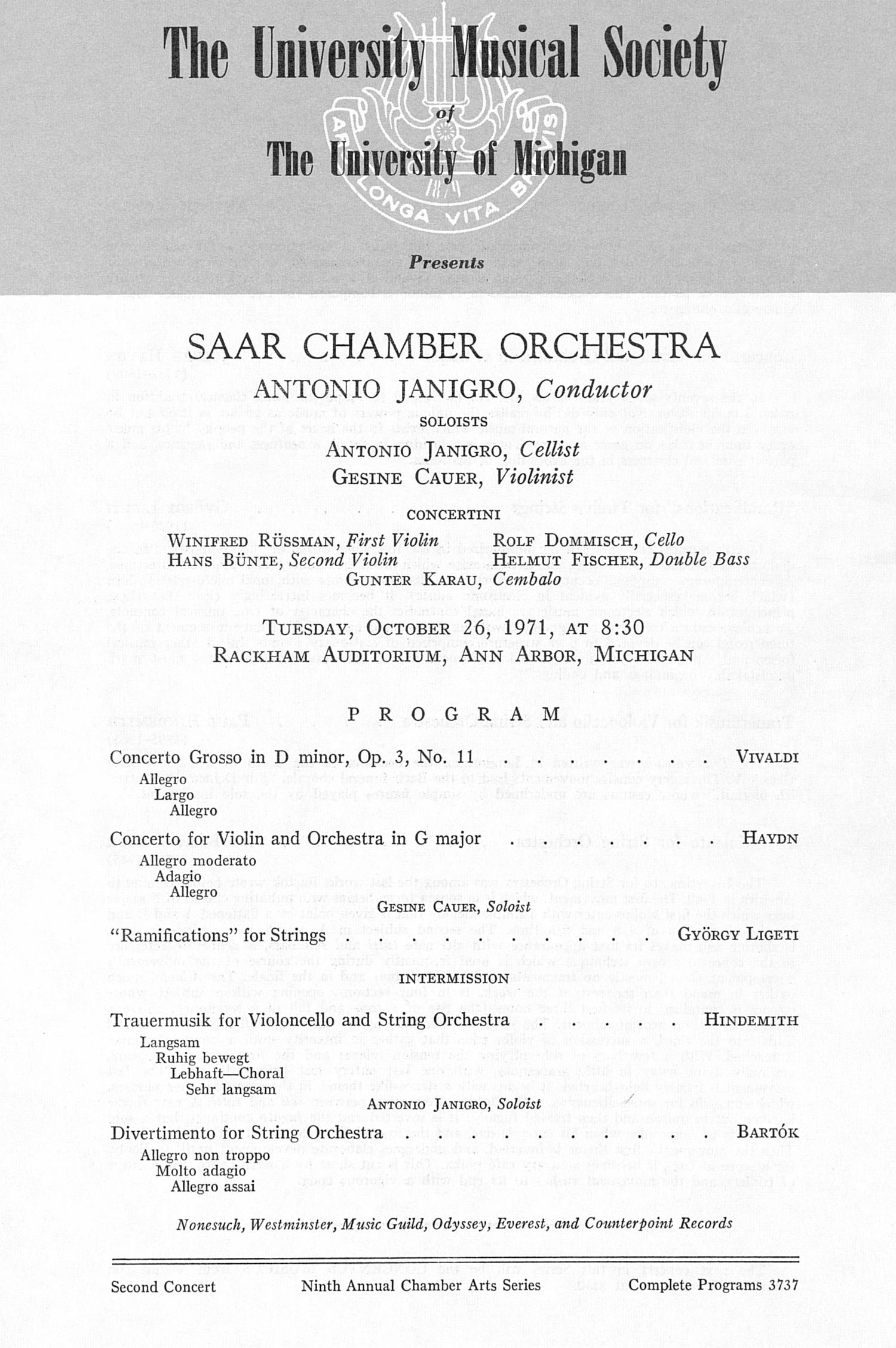 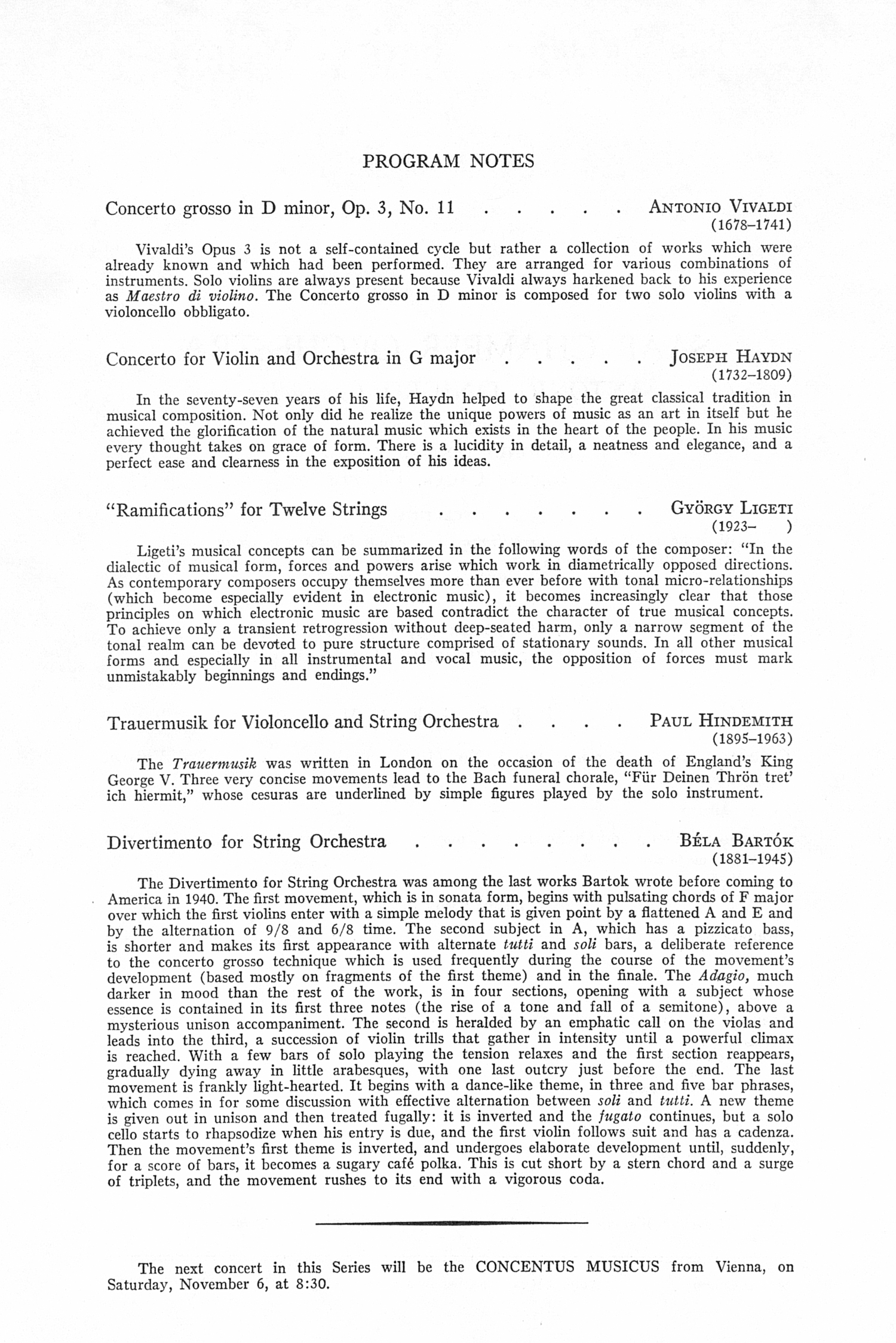 The
University Musical Society
The University
Presents
SAAR CHAMBER ORCHESTRA
ANTONIO JANIGRO, Conductor
SOLOISTS
Antonio Janigro, Cellist Gesine Cauer, Violinist
CONCERTINI
Winifred Russman, First Violin Rolf Dommisch, Cello
Hans Bunte, Second Violin Helmut Fischer, Double Bass
Gunter Karau, Cembalo
Tuesday, October 26, 1971, at 8:30 Rackham Auditorium, Ann Arbor, Michigan
PROGRAM
Concerto Grosso in D minor, Op. 3, No. 11.......Vivaldi
Allegro Largo Allegro
Concerto for Violin and Orchestra in G major
Allegro moderato Adagio Allegro
Gesine Cauer, Soloist
"Ramifications" for Strings.......
INTERMISSION
Trauermusik for Violoncello and String Orchestra
Langsam
Ruhig bewegt Lebhaft--Choral Schr langsam
Antonio Janigro, Soloist
Haydn
Gyorgy Ligeti
HlNDEMITH
@@@@Divertimento for String Orchestra..........Bartok
Allegro non troppo Molto adagio Allegro assai
Nonesuch, Westminster, Music Guild, Odyssey, Everest, and Counterpoint Records
Second Concert
Ninth Annual Chamber Arts Series
Complete Programs 3737
PROGRAM NOTES
Concerto grosso in D minor, Op. 3, No. 11.....Antonio Vivaldi
(16781741)
Vivaldi's Opus 3 is not a selfcontained cycle but rather a collection of works which were already known and which had been performed. They are arranged for various combinations of instruments. Solo violins are always present because Vivaldi always harkened back to his experience as Maestro di violino. The Concerto grosso in D minor is composed for two solo violins with a violoncello obbligato.
Concerto for Violin and Orchestra in G major.....Joseph Haydn
(17321809)
In the seventyseven years of his life, Haydn helped to shape the great classical tradition in musical composition. Not only did he realize the unique powers of music as an art in itself but he achieved the glorification of the natural music which exists in the heart of the people. In his music every thought takes on grace of form. There is a lucidity in detail, a neatness and elegance, and a perfect ease and clearness in the exposition of his ideas.
"Ramifications" for Twelve Strings .......Gyorgy Ligeti
(1923 )
Ligeti's musical concepts can be summarized in the following words of the composer: "In the dialectic of musical form, forces and powers arise which work in diametrically opposed directions. As contemporary composers occupy themselves more than ever before with tonal microrelationships (which become especially evident in electronic music), it becomes increasingly clear that those principles on which electronic music are based contradict the character of true musical concepts. To achieve only a transient retrogression without deepseated harm, only a narrow segment of the tonal realm can be devoted to pure structure comprised of stationary sounds. In all other musical forms and especially in all instrumental and vocal music, the opposition of forces must mark unmistakably beginnings and endings."
Trauermusik for Violoncello and String Orchestra .... Paul Hindemith
(18951963)
The Trauermusik was written in London on the occasion of the death of England's King George V. Three very concise movements lead to the Bach funeral chorale, "Fur Dcinen Thron tret' ich hiermit," whose cesuras are underlined by simple figures played by the solo instrument.
Divertimento for String Orchestra........Bela Bartok
(1881194S)
The Divertimento for String Orchestra was among the last works Bartok wrote before coming to America in 1940. The first movement, which is in sonata form, begins with pulsating chords of F major over which the first violins enter with a simple melody that is given point by a flattened A and E and by the alternation of 98 and 68 time. The second subject in A, which has a pizzicato bass, is shorter and makes its first appearance with alternate tutti and soli bars, a deliberate reference to the concerto grosso technique which is used frequently during the course of the movement's development (based mostly on fragments of the first theme) and in the finale. The Adagio, much darker in mood than the rest of the work, is in four sections, opening with a subject whose essence is contained in its first three notes (the rise of a tone and fall of a semitone), above a mysterious unison accompaniment. The second is heralded by an emphatic call on the violas and leads into the third, a succession of violin trills that gather in intensity until a powerful climax is reached. With a few bars of solo playing the tension relaxes and the first section reappears, gradually dying away in little arabesques, with one last outcry just before the end. The last movement is frankly lighthearted. It begins with a dancelike theme, in three and five bar phrases, which comes in for some discussion with effective alternation between soli and tutti. A new theme is given out in unison and then treated fugally: it is inverted and the fugato continues, but a solo cello starts to rhapsodize when his entry is due, and the first violin follows suit and has a cadenza. Then the movement's first theme is inverted, and undergoes elaborate development until, suddenly, for a score of bars, it becomes a sugary caf6 polka. This is cut short by a stern chord and a surge of triplets, and the movement rushes to its end with a vigorous coda.
The next concert in this Series will be the CONCENTUS MUSICUS from Vienna, on Saturday, November 6, at 8:30.