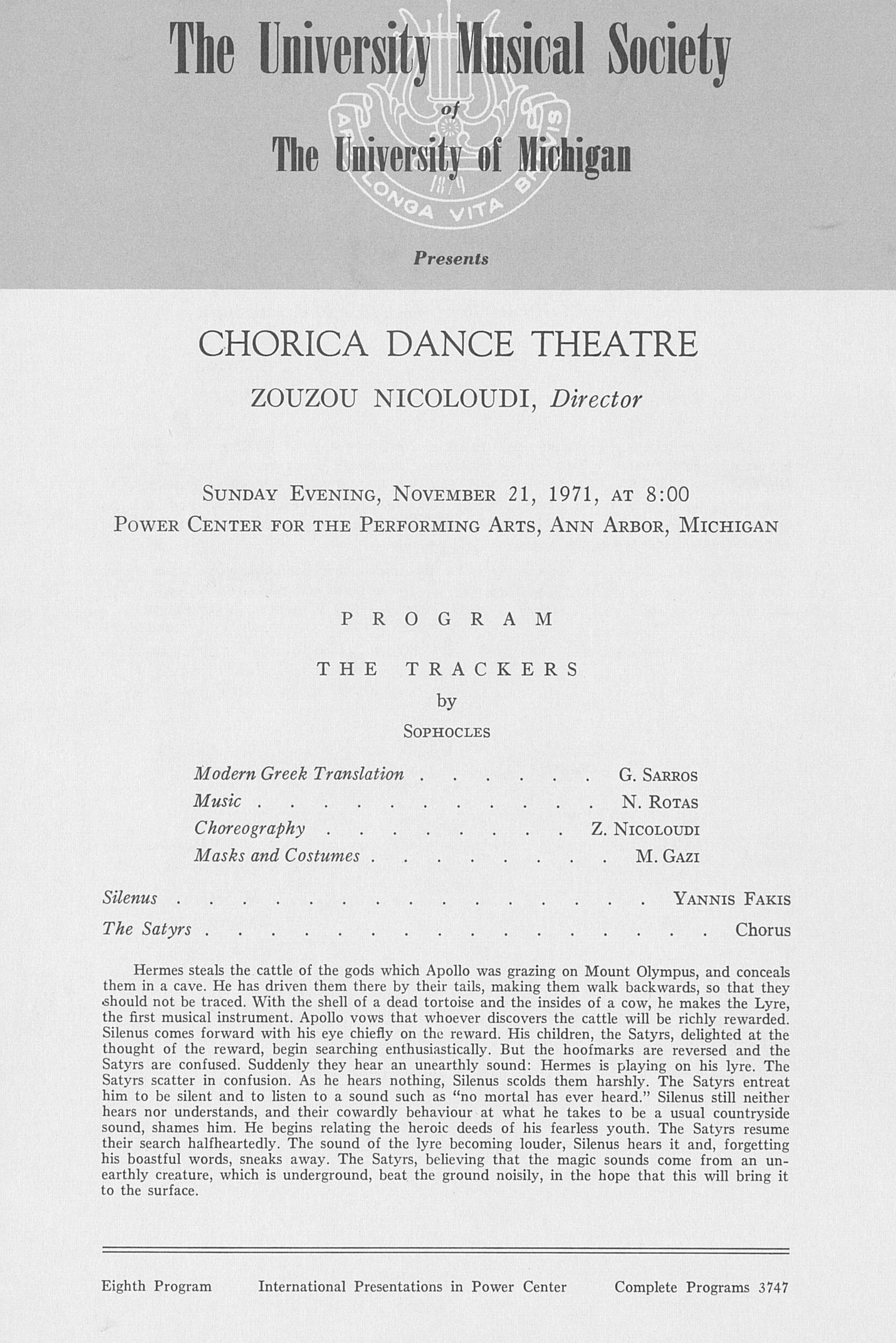 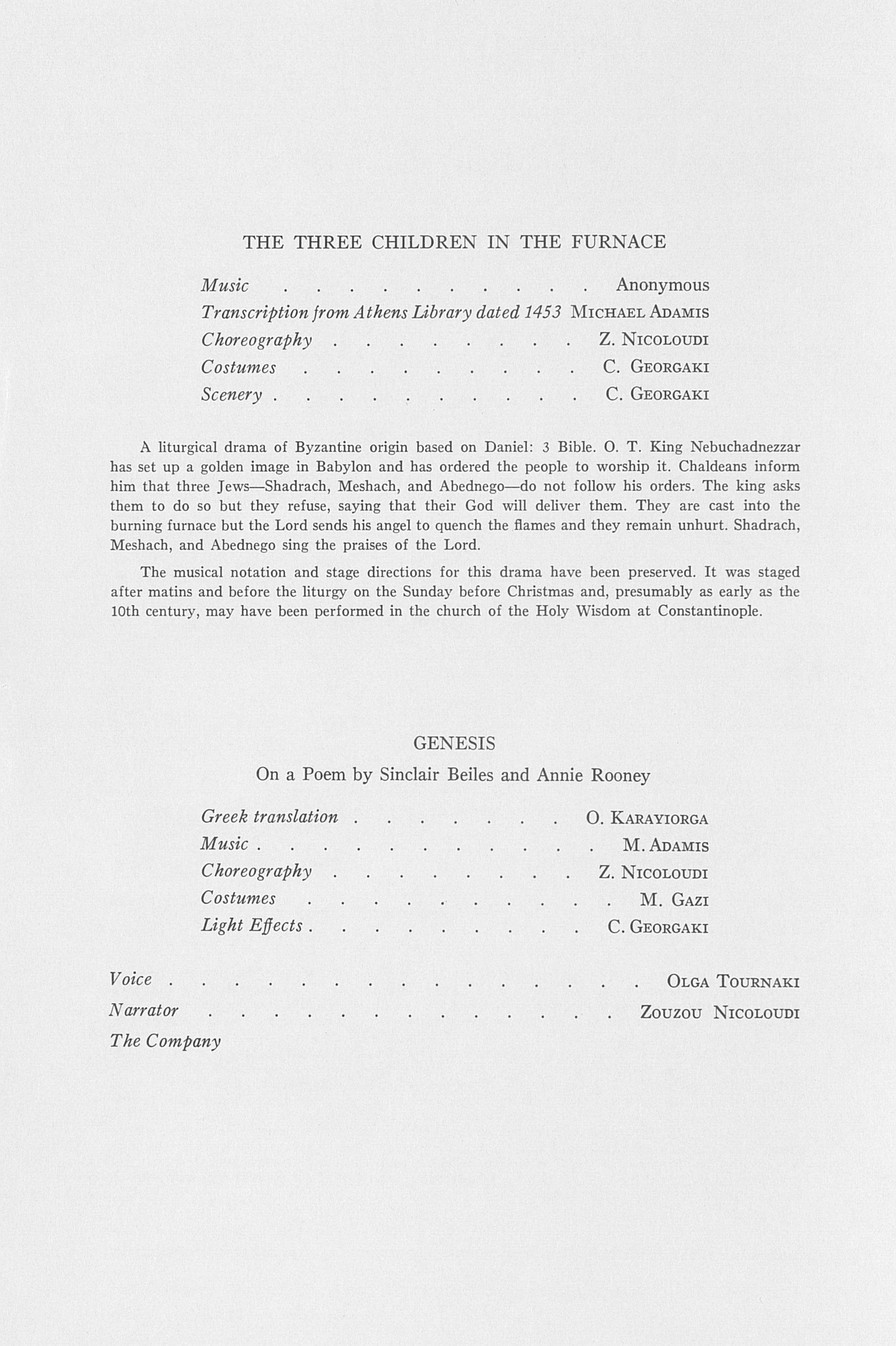 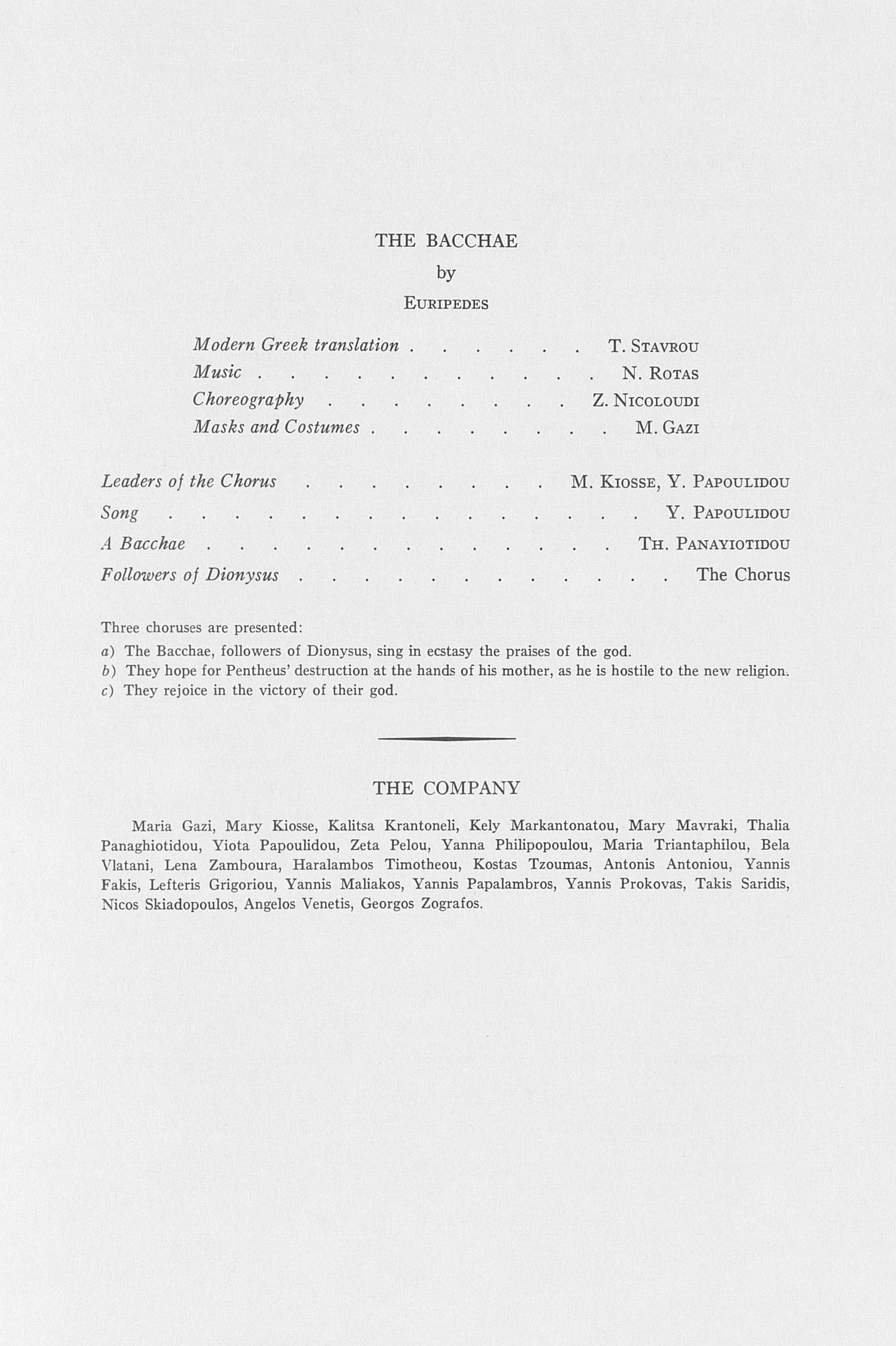 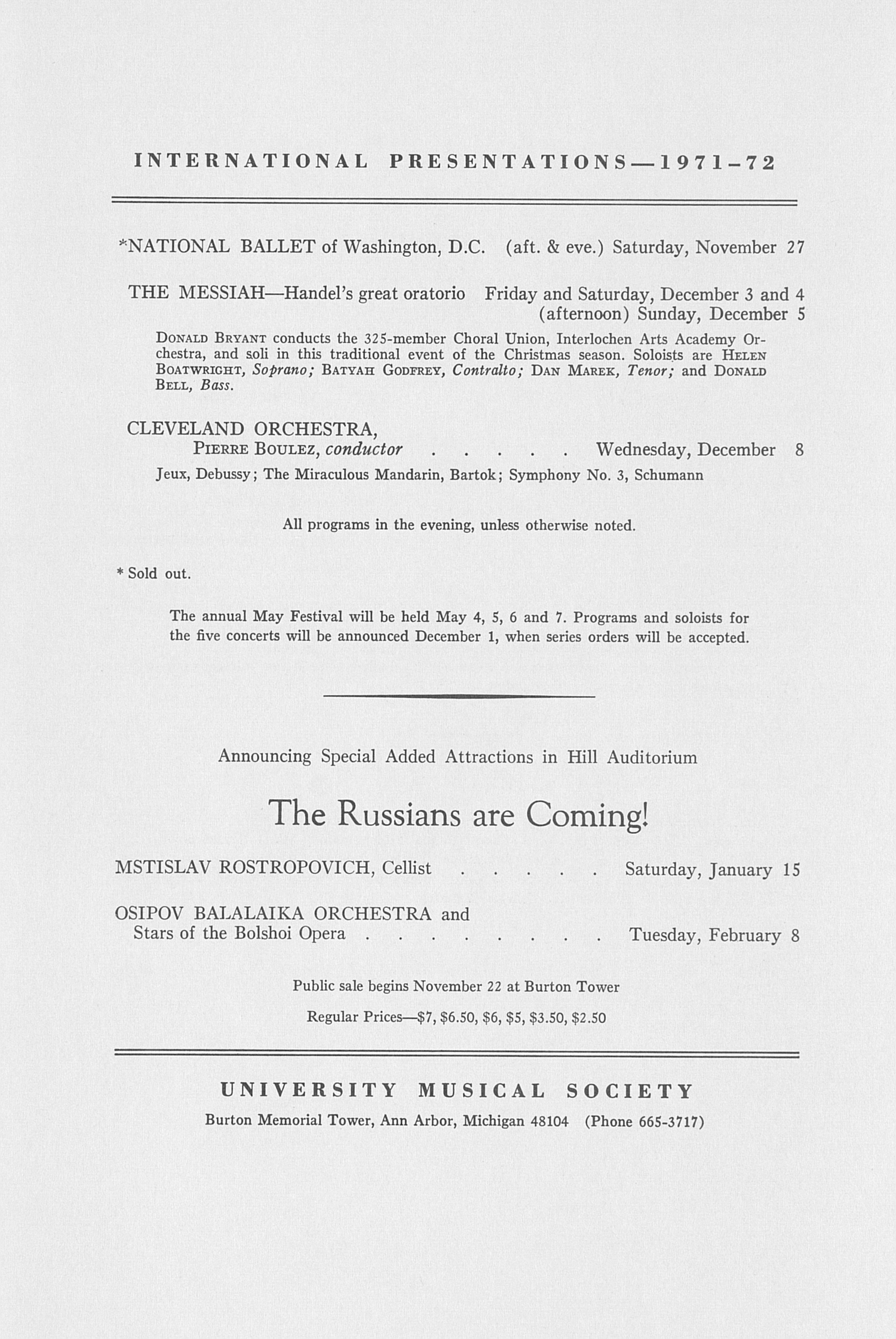 The University Musical Society
The University of Michigan
Presents
CHORICA DANCE THEATRE
ZOUZOU NICOLOUDI, Director
Sunday Evening, November 21, 1971, at 8:00 Power Center for the Performing Arts, Ann Arbor, Michigan
PROGRAM
THE TRACKERS
by Sophocles
Modern Greek Translation......G. Sareos
Music...........N. Rotas
Choreography........Z. Nicoloudi
Masks and Costumes........M. Gazi
Silenus...............Yannis Fakis
The Satyrs................Chorus
Hermes steals the cattle of the gods which Apollo was grazing on Mount Olympus, and conceals them in a cave. He has driven them there by their tails, making them walk backwards, so that they .should not be traced. With the shell of a dead tortoise and the insides of a cow, he makes the Lyre, the first musical instrument. Apollo vows that whoever discovers the cattle will be richly rewarded. Silenus comes forward with his eye chiefly on the reward. His children, the Satyrs, delighted at the thought of the reward, begin searching enthusiastically. But the hoofmarks are reversed and the Satyrs are confused. Suddenly they hear an unearthly sound: Hermes is playing on his lyre. The Satyrs scatter in confusion. As he hears nothing, Silenus scolds them harshly. The Satyrs entreat him to be silent and to listen to a sound such as "no mortal has ever heard." Silenus still neither hears nor understands, and their cowardly behaviour at what he takes to be a usual countryside sound, shames him. He begins relating the heroic deeds of his fearless youth. The Satyrs resume their search halfheartedly. The sound of the lyre becoming louder, Silenus hears it and, forgetting his boastful words, sneaks away. The Satyrs, believing that the magic sounds come from an un?earthly creature, which is underground, beat the ground noisily, in the hope that this will bring it to the surface.
Eighth Program International Presentations in Power Center Complete Programs 3747
THE THREE CHILDREN IN THE FURNACE
Music..........Anonymous
Transcription from Athens Library dated 1453 Michael Adamis
Choreography........Z. Nicoloudi
Costumes.........C. Georgaki
Scenery..........C. Georgaki
A liturgical drama of Byzantine origin based on Daniel: 3 Bible. O. T. King Nebuchadnezzar has set up a golden image in Babylon and has ordered the people to worship it. Chaldeans inform him that three Jews--Shadrach, Meshach, and Abednego--do not follow his orders. The king asks them to do so but they refuse, saying that their God will deliver them. They are cast into the burning furnace but the Lord sends his angel to quench the flames and they remain unhurt. Shadrach, Meshach, and Abednego sing the praises of the Lord.
The musical notation and stage directions for this drama have been preserved. It was staged after matins and before the liturgy on the Sunday before Christmas and, presumably as early as the 10th century, may have been performed in the church of the Holy Wisdom at Constantinople.
GENESIS On a Poem by Sinclair Beiles and Annie Rooney
Greek translation.......O. Karayiorga
Music...........M. Adamis
Choreography........Z. Nicoloudi
Costumes..........M. Gazi
Light Effects.........C. Georgaki
Voice...............Olga Tournaki
Narrator.............Zouzou Nicoloudi
The Company
THE BACCHAE
by
EURIPEDES
Modern Greek translation......T. Stavrou
Music...........N. Rotas
Choreography........Z. Nicoloudi
Masks and Costumes........M. Gazi
Leaders of the Chorus........M. Kiosse, Y. Papoulidou
Song...............Y. Papoulidou
A Bacchae.............Th. Panayiotidou
Followers of Dionysus............The Chorus
Three choruses are presented:
a) The Bacchae, followers of Dionysus, sing in ecstasy the praises of the god.
b) They hope for Pentheus' destruction at the hands of his mother, as he is hostile to the new religion.
c) They rejoice in the victory of their god.
THE COMPANY
Maria Gazi, Mary Kiosse, Kalitsa Krantoneli, Kely Markantonatou, Mary Mavraki, Thalia Panaghiotidou, Yiota Papoulidou, Zeta Pelou, Yanna Philipopoulou, Maria Triantaphilou, Bela Vlatani, Lena Zamboura, Haralambos Timotheou, Kostas Tzoumas, Antonis Antoniou, Yannis Fakis, Lefteris Grigoriou, Yannis Maliakos, Yannis Papalambros, Yannis Prokovas, Takis Saridis, Nicos Skiadopoulos, Angelos Venetis, Georgos Zografos.
INTERNATIONAL PRESENTATIONS --197 172
NATIONAL BALLET of Washington, D.C. (aft. & eve.) Saturday, November 27
THE MESSIAH--Handel's great oratorio Friday and Saturday, December 3 and 4
(afternoon) Sunday, December 5
Donald Bryant conducts the 325member Choral Union, Interlochen Arts Academy Or?chestra, and soli in this traditional event of the Christmas season. Soloists are Helen Boatwright, Soprano; Batyah Godfrey, Contralto; Dan Marek, Tenor; and Donald Bell, Bass.
CLEVELAND ORCHESTRA,
Pierre Boulez, conductor.....Wednesday, December 8
Jeux, Debussy; The Miraculous Mandarin, Bartok; Symphony No. 3, Schumann All programs in the evening, unless otherwise noted.
? Sold out.
The annual May Festival will be held May 4, S, 6 and 7. Programs and soloists for the five concerts will be announced December 1, when series orders will be accepted.
Announcing Special Added Attractions in Hill Auditorium
The Russians are Coming!
MSTISLAV ROSTROPOVICH, Cellist.....Saturday, January 15
OSIPOV BALALAIKA ORCHESTRA and Stars of the Bolshoi Opera........Tuesday, February 8
Public sale begins November 22 at Burton Tower Regular Prices--$7, $6.50, $6, $5, $3.50, $2.50
UNIVERSITY MUSICAL SOCIETY
Burton Memorial Tower, Ann Arbor, Michigan 48104 (Phone 6653717)