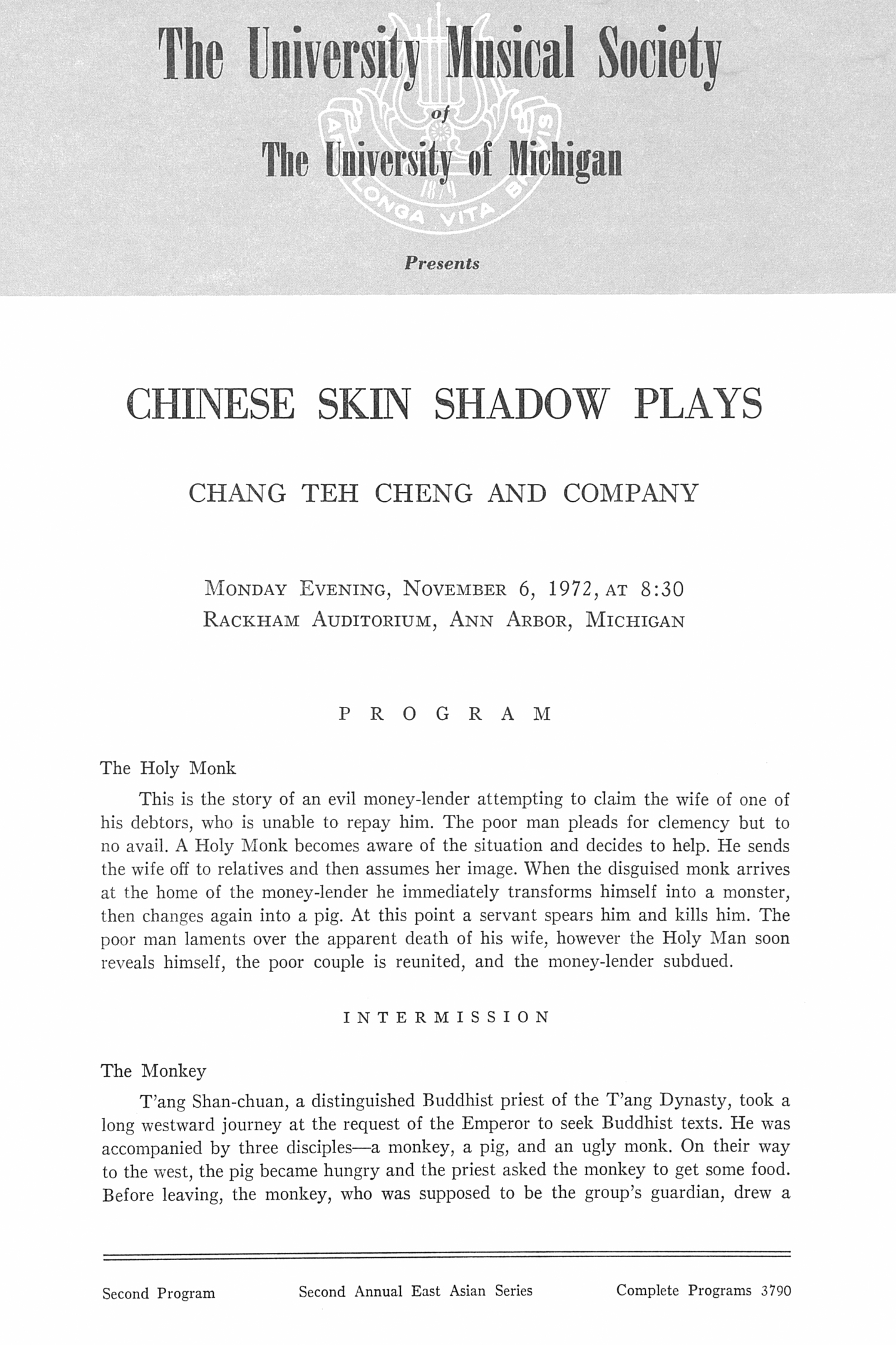 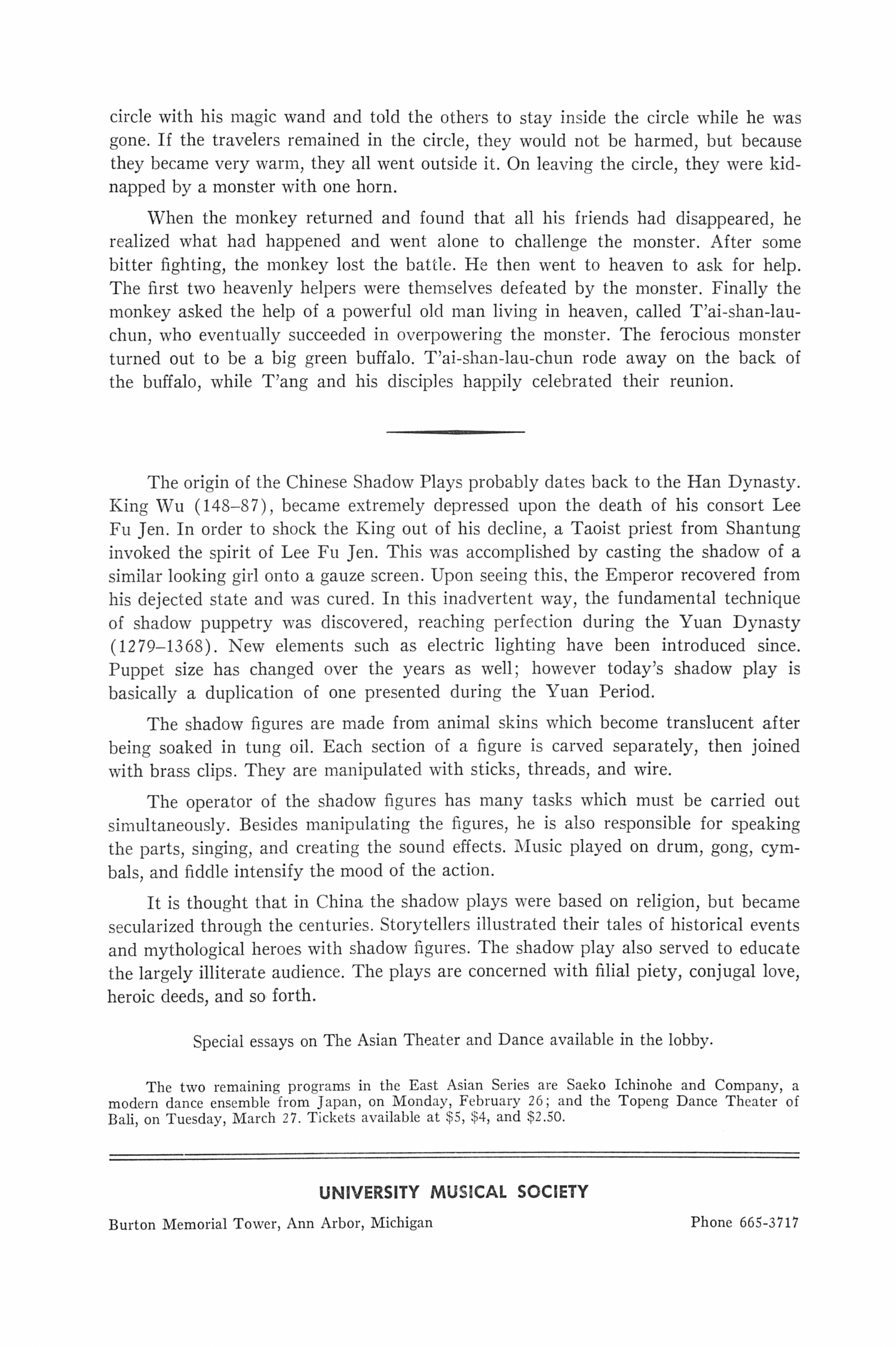 The University Musical Society
of
The University of Michigan
Presents
CHINESE SKIN SHADOW PLAYS
CHANG TEH CHENG AND COMPANY
Monday Evening, November 6, 1972, at 8:30 Rackham Auditorium, Ann Arbor, Michigan
PROGRAM
The Holy Monk
This is the story of an evil moneylender attempting to claim the wife of one of his debtors, who is unable to repay him. The poor man pleads for clemency but to no avail. A Holy Monk becomes aware of the situation and decides to help. He sends the wife off to relatives and then assumes her image. When the disguised monk arrives at the home of the moneylender he immediately transforms himself into a monster, then changes again into a pig. At this point a servant spears him and kills him. The poor man laments over the apparent death of his wife, however the Holy Man soon reveals himself, the poor couple is reunited, and the moneylender subdued.
INTERMISSION
The Monkey
T'ang Shanchuan, a distinguished Buddhist priest of the T'ang Dynasty, took a long westward journey at the request of the Emperor to seek Buddhist texts. He was accompanied by three disciples--a monkey, a pig, and an ugly monk. On their way to the west, the pig became hungry and the priest asked the monkey to get some food. Before leaving, the monkey, who was supposed to be the group's guardian, drew a
Second Program Second Annual East Asian Series Complete Programs 3790
circle with his magic wand and told the others to stay inside the circle while he was gone. If the travelers remained in the circle, they would not be harmed, but because they became very warm, they all went outside it. On leaving the circle, they were kid?napped by a monster with one horn.
When the monkey returned and found that all his friends had disappeared, he realized what had happened and went alone to challenge the monster. After some bitter fighting, the monkey lost the battle. He then went to heaven to ask for help. The first two heavenly helpers were themselves defeated by the monster. Finally the monkey asked the help of a powerful old man living in heaven, called T'aishanlauchun, who eventually succeeded in overpowering the monster. The ferocious monster turned out to be a big green buffalo. T'aishanlauchun rode away on the back of the buffalo, while T'ang and his disciples happily celebrated their reunion.
The origin of the Chinese Shadow Plays probably dates back to the Han Dynasty. King Wu (14887), became extremely depressed upon the death of his consort Lee Fu Jen. In order to shock the King out of his decline, a Taoist priest from Shantung invoked the spirit of Lee Fu Jen. This was accomplished by casting the shadow of a similar looking girl onto a gauze screen. Upon seeing this, the Emperor recovered from his dejected state and was cured. In this inadvertent way, the fundamental technique of shadow puppetry was discovered, reaching perfection during the Yuan Dynasty (12791368). New elements such as electric lighting have been introduced since. Puppet size has changed over the years as well; however today's shadow play is basically a duplication of one presented during the Yuan Period.
The shadow figures are made from animal skins which become translucent after being soaked in tung oil. Each section of a figure is carved separately, then joined with brass clips. They are manipulated with sticks, threads, and wire.
The operator of the shadow figures has many tasks which must be carried out simultaneously. Besides manipulating the figures, he is also responsible for speaking the parts, singing, and creating the sound effects. Music played on drum, gong, cym?bals, and fiddle intensify the mood of the action.
It is thought that in China the shadow plays were based on religion, but became secularized through the centuries. Storytellers illustrated their tales of historical events and mythological heroes with shadow figures. The shadow play also served to educate the largely illiterate audience. The plays are concerned with filial piety, conjugal love, heroic deeds, and so forth.
Special essays on The Asian Theater and Dance available in the lobby.
The two remaining programs in the East Asian Scries are Saeko Ichinohc and Company, a modern dance ensemble from Japan, on Monday, February 26; and the Topeng Dance Theater of Bali, on Tuesday, March 27. Tickets available at 5, 4, and $2.50.
UNIVERSITY MUSICAL SOCIETY
Burton Memorial Tower, Ann Arbor, Michigan Phone 6653717