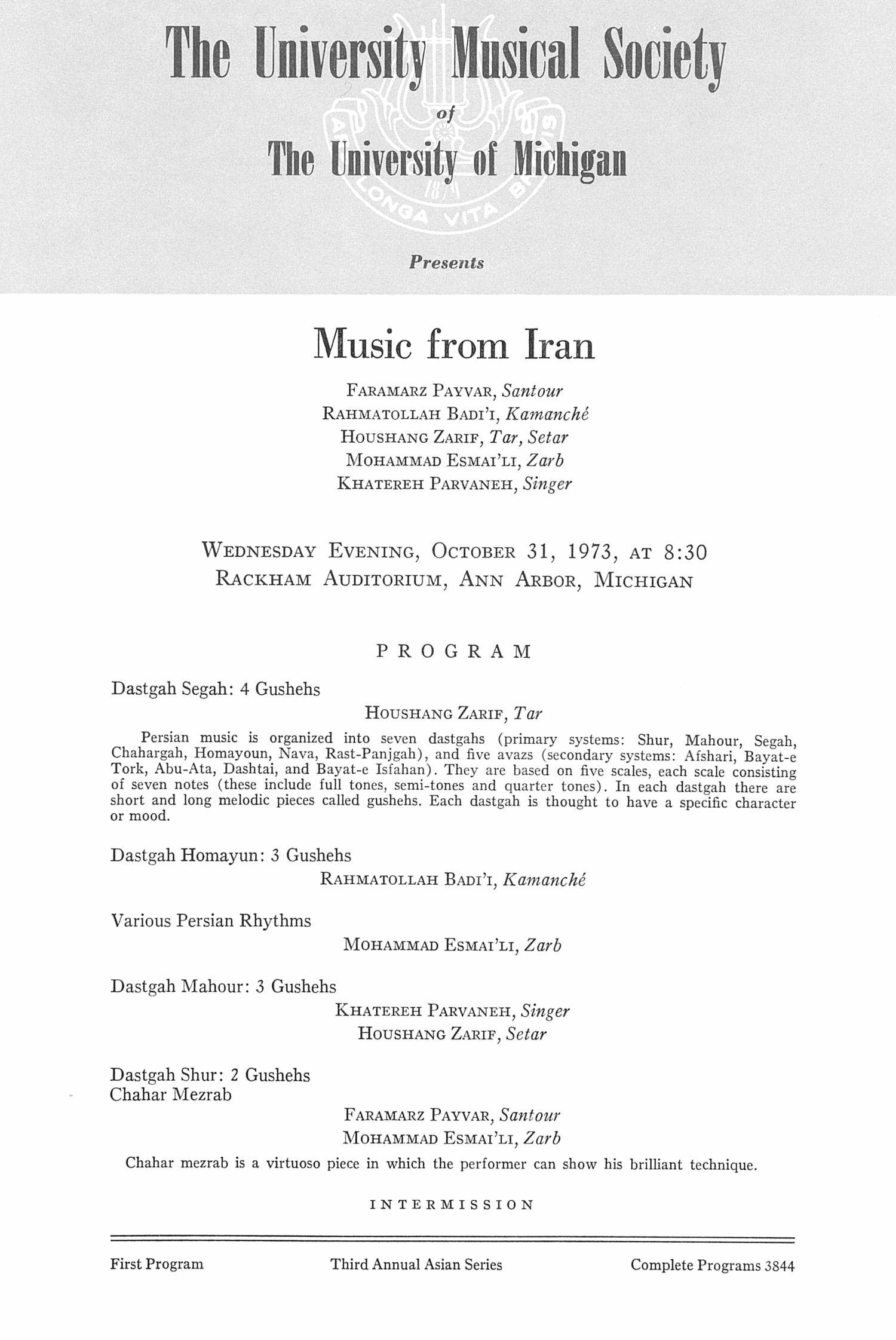 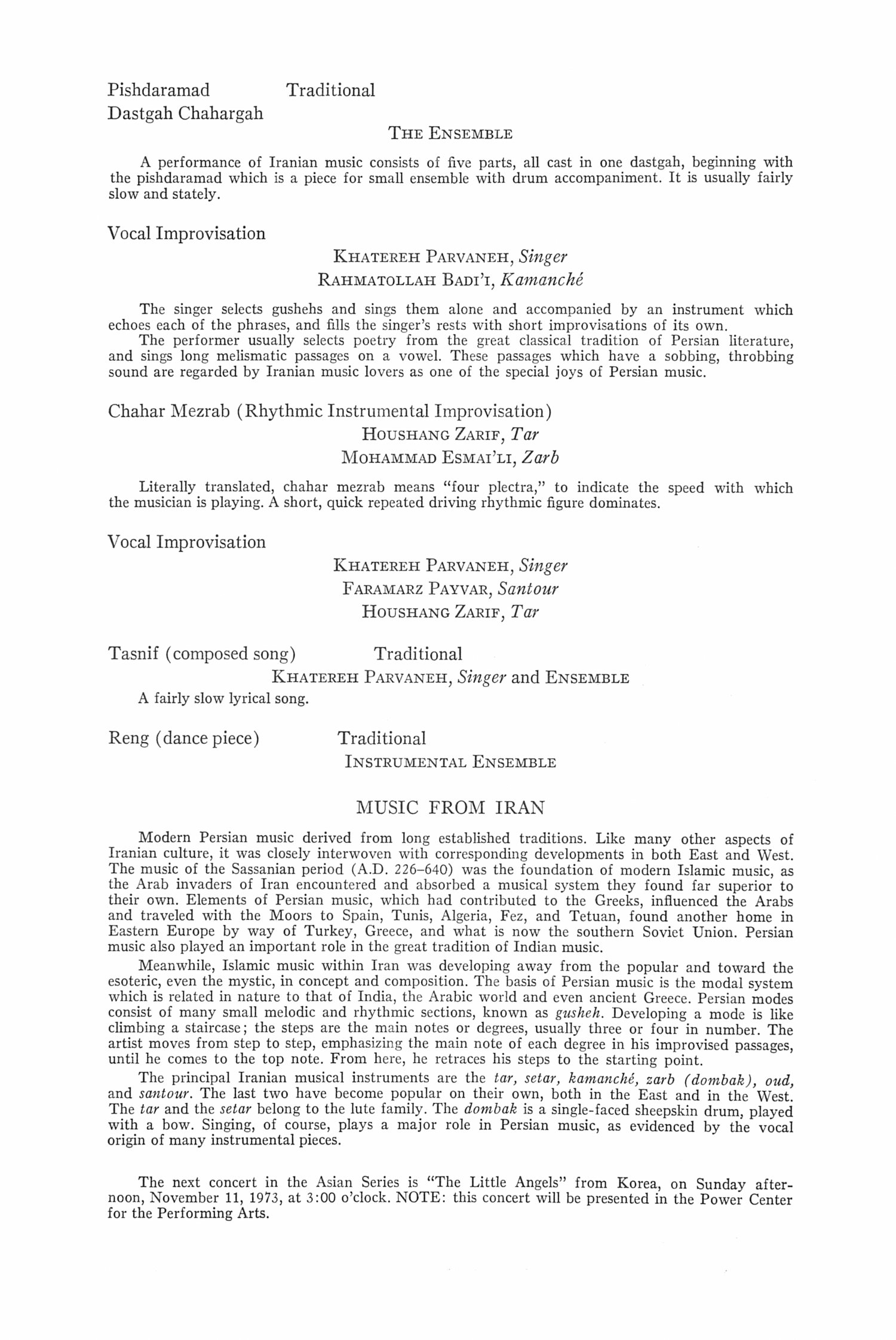 The University Musical Society
of
The University of Michigan
Presents
Music from Iran
Faramarz Payvar, Santour
Rahmatollah Badi'i, Kamanche
Houshang Zarif, Tar, Sctar
Mohammad Esmai'li, Zarb
Khatereh Parvaneh, Singer
Wednesday Evening, October 31, 1973, at 8:30 Rackham Auditorium, Ann Arbor, Michigan
PROGRAM
Dastgah Segah: 4 Gushehs
Houshang Zarif, Tar
Persian music is organized into seven dastgahs (primary systems: Shur, Mahour, Segah, Chahargah, Homayoun, Nava, RastPanjgah), and five avazs (secondary systems: Afshari, Bayate Tork, AbuAta, Dashtai, and Bayate Isfahan). They are based on five scales, each scale consisting of seven notes (these include full tones, semitones and quarter tones). In each dastgah there are short and long melodic pieces called gushehs. Each dastgah is thought to have a specific character or mood.
Dastgah Homayun: 3 Gushehs
Rahmatollah Badi'i, Kamanche
Various Persian Rhythms
Mohammad Esmai'li, Zarb
Dastgah Mahour: 3 Gushehs
Khatereh Parvaneh, Singer Houshang Zarif, Sctar
Dastgah Shur: 2 Gushehs Chahar Mezrab
Faramarz Payvar, Santour
Mohammad Esmai'li, Zarb Chahar mezrab is a virtuoso piece in which the performer can show his brilliant technique.
INTERMISSION
First Program Third Annual Asian Series Complete Programs 3844
Pishdaramad Traditional
Dastgah Chahargah
The Ensemble
A performance of Iranian music consists of five parts, all cast in one dastgah, beginning with the pishdaramad which is a piece for small ensemble with drum accompaniment. It is usually fairly slow and stately.
Vocal Improvisation
Khatereh Parvaneh, Singer Rahmatollah Badi'i, Kamanche
The singer selects gushehs and sings them alone and accompanied by an instrument which echoes each of the phrases, and fills the singer's rests with short improvisations of its own.
The performer usually selects poetry from the great classical tradition of Persian literature, and sings long melismatic passages on a vowel. These passages which have a sobbing, throbbing sound are regarded by Iranian music lovers as one of the special joys of Persian music.
Chahar Mezrab (Rhythmic Instrumental Improvisation)
Houshang Zarif, Tar Mohammad Esmai'li, Zarb
Literally translated, chahar mezrab means "four plectra," to indicate the speed with which the musician is playing. A short, quick repeated driving rhythmic figure dominates.
Vocal Improvisation
Khatereh Parvaneh, Singer
Faramarz Payvar, Santour
Houshang Zarif, Tar
Tasnif (composed song) Traditional
Khatereh Parvaneh, Singer and Ensemble A fairly slow lyrical song.
Reng (dance piece) Traditional
Instrumental Ensemble
MUSIC FROM IRAN
Modern Persian music derived from long established traditions. Like many other aspects of Iranian culture, it was closely interwoven with corresponding developments in both East and West. The music of the Sassanian period (A.D. 226640) was the foundation of modern Islamic music, as the Arab invaders of Iran encountered and absorbed a musical system they found far superior to their own. Elements of Persian music, which had contributed to the Greeks, influenced the Arabs and traveled with the Moors to Spain, Tunis, Algeria, Fez, and Tetuan, found another home in Eastern Europe by way of Turkey, Greece, and what is now the southern Soviet Union. Persian music also played an important role in the great tradition of Indian music.
Meanwhile, Islamic music within Iran was developing away from the popular and toward the esoteric, even the mystic, in concept and composition. The basis of Persian music is the modal system which is related in nature to that of India, the Arabic world and even ancient Greece. Persian modes consist of many small melodic and rhythmic sections, known as gusheh. Developing a mode is like climbing a staircase; the steps are the main notes or degrees, usually three or four in number. The artist moves from step to step, emphasizing the main note of each degree in his improvised passages, until he comes to the top note. From here, he retraces his steps to the starting point.
The principal Iranian musical instruments are the tar, seiar, kamanche, zarb (dombak), oud, and santour. The last two have become popular on their own, both in the East and in the West. The tar and the setar belong to the lute family. The dombak is a singlefaced sheepskin drum, played with a bow. Singing, of course, plays a major role in Persian music, as evidenced by the vocal origin of many instrumental pieces.
The next concert in the Asian Series is "The Little Angels" from Korea, on Sunday after?noon, November 11, 1973, at 3:00 o'clock. NOTE: this concert will be presented in the Power Center for the Performing Arts.